Laura's e-xcited about riding across Britain

Laura's ready to ride from Land's End to John o' Groats thanks to a little e-assistance
By LauraLaker
Thursday, 5 September 2019

Laura's e-xcited about riding across Britain

The waiting is over, as this Saturday journalist Laura Laker takes on her greatest challenge yet: riding the length of Britain in just nine days. However with a little e-assistance she's feeling more than ready for the task!

In my last blog instalment, I struggled with the magnitude of what I’d taken on. At my lowest point, riding the length of the country, 980 miles in nine consecutive days, seemed impossible – at best a hare-brained extra demand on top of a full-time job and busy life.

My choices were to continue making myself miserable, quit, or take a third, untested option.

My choices were to continue making myself miserable, quit, or take a third, untested option.

That would be to ride the length of Britain on an ebike. Having cycled extensively around London on an e-town bike, and across Scotland on an e-mountain bike, I’ve seen how they can make longer trips easier, leaving breathing space to enjoy the views, and even to whistle and sing as you go.

If I could get one to last for 110-odd miles it would effectively be like pedalling 50-odd miles a day, I told myself. Much more manageable. I could keep training as much as I could, and it would just take some of the pressure off.

The ride organisers were OK with the idea, as an experiment, so I took some advice from ebike expert, Dave Atkinson of road.cc and ebiketips. Having test-ridden innumerable ebikes, he recommended Ribble or Boardman as candidates.

We opted for Ribble, because he could ask them in person for a guinea pig bike that week. Ribble were keen and so, thanks to some hitches from my end, a week before the big ride, the bike arrived.

It was a red Ribble CGR AL e, with Shimano 105 11-speed groupset, and hydraulic disc brakes (from £2,299 RRP). Ribble would throw in their newly-released range extender (RE), a range-doubling second battery, RRP £500.

I was conscious, when unpacking the bike, of its heft - understandable, given the combined battery power weighs 5kg. My local bike shop expressed concern that, when the battery runs out, I’ll be working very hard to finish each day’s ride.

Ribble assure me you can get 150km of constant assist out of a battery and, if I took it easy, didn’t do too much stop-start riding, and even turned it off from time to time, I should be able to squeeze the 170-odd km I needed out of it each day, charging it at camp each night.

To test for myself, I fitted a new saddle, put on my newly-upgraded shoes, and took the new bike, saddle and shoes out for both their first and final training ride, towards Kent. I am last-minute Laura. 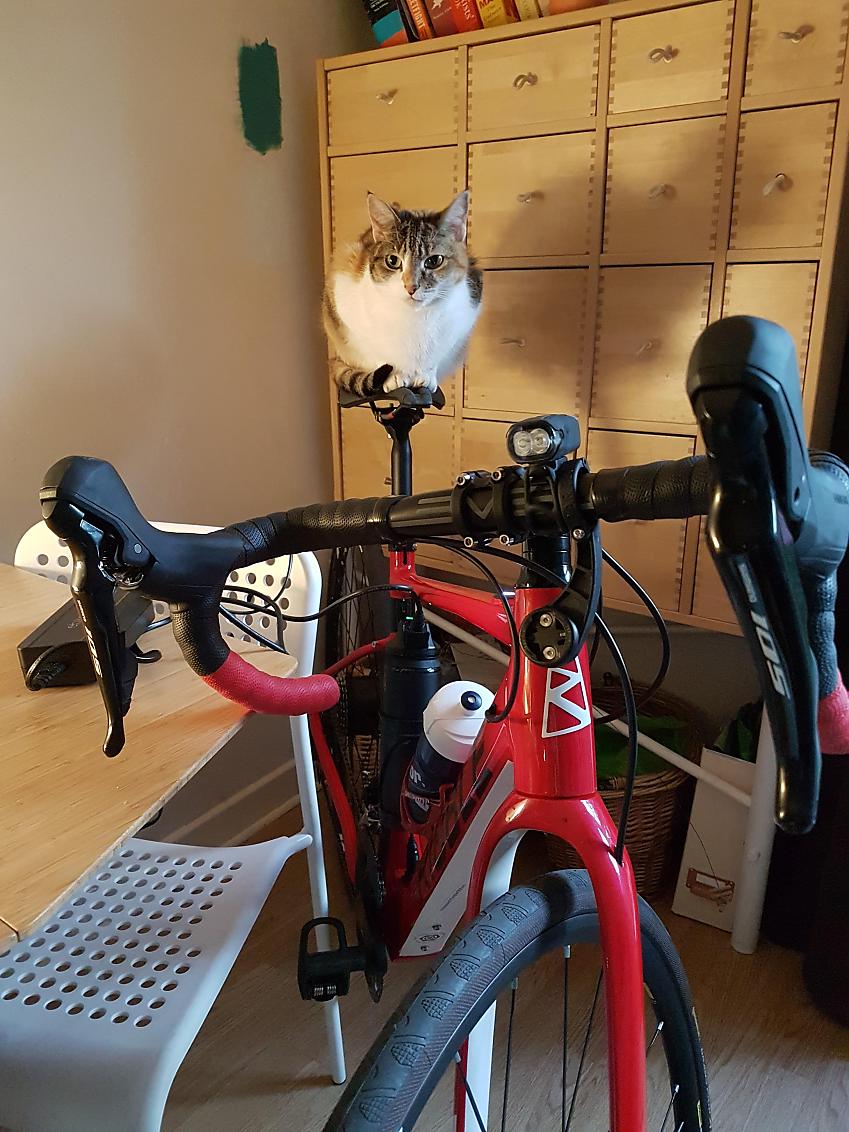 They weren’t wrong about stop-start riding draining the battery; as I left London I could feel the effects of the assist each time I set off from the lights. Conversely, once the assist cut off, by law at 15.5mph, I knew, thanks to its weight, going too much faster would be a challenge, especially for a light rider rather low on wattage.

Once I left London the bike came into its own. The hills were, if not a breeze, certainly a lot easier. I could enjoy the scenery, rather than worry about the effort. If I were to do 110 miles a day for nine days straight, this is how I wanted them to be. This suddenly seemed doable.

The hills were, if not a breeze, certainly a lot easier. I could enjoy the scenery, rather than worry about the effort.

The disc brakes, meanwhile, meant the usual trepidation I approached descents with was gone and, with the extra weight, I descended like a stone.

I stopped at a farm for a sandwich and a second loo stop, amid llama, emus and chickens, and then, cheese sandwich heavy in stomach, ascended a hill so steep I wondered if the front wheel would leave the ground. It was doable, though, with considerable panting and effort, and the views were amazing. This was, by far, my most enjoyable training ride yet. Could the ebike be the answer to the meaning of life?!

I made it as far as Sevenoaks, feeling I’d tested enough. The spare battery was depleted after 65 km and 800m of climbing, on the lowest of three modes, albeit most of that stop-start out of London. I’d have to be strategic, dial down how much assist I was getting, which is possible via the bike’s Bluetooth connection and an app.

So it is, I’m setting off to ride the length of the country on an ebike I barely know. I’m entering unchartered territory, but I like a challenge.

One post-script, perhaps of interest, is people’s reactions when I tell them my plans. “It’s cheating!” is the invariable response. Never mind none of these people have ever ridden an ebike, or cycled the length of the country. We still have a long way to go to widespread acceptance of them in the UK, which seems a shame.

It also made me wonder, with some trepidation, how my fellow LEJOG riders will react; whether I’ll be shunned for ’cheating’, and how I’ll find a suitably-paced group with my new-found climbing ability, paired with my sluggishness on the flats. We shall see.

For the organisers it’s a bit of an experiment, too. On the success or failure of my exploits they’ll set their policy on ebikes for next year...

Other kit Laura is taking 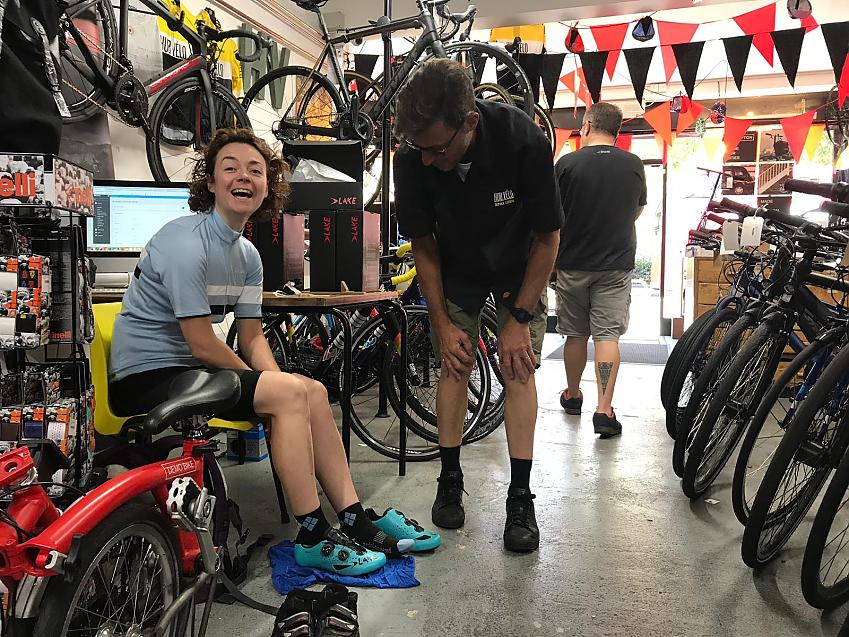 The Boardman Centre’s Bianca Broadbent recommended I change my very old cycling shoes, which were no longer supportive and were actually a size too small. Lake Shoes helped me out with a pair of their very snazzy, very comfortable CX241 shoes, with separate leather sections that close around the foot’s shape with Boa dials, and apparently allow the foot to expand when pressing hard, or when warm.

Bibs never previously worked for me, simply because, as a female, many require you to undress at each comfort break. Endura sent me a pair of their Pro SL bib shorts, with drop seat zip to the rear, which allow for comfort breaks on the move, which I love, along with matching jersey and Pro SL helmet – thank you, Endura!

I’ll also be wearing Rapha Cargo shorts, which have pockets in the side of the leg, to hold phone or snacks, money, or anything else you care to put in them. I also got one of their lovely Brevet jerseys, with reflective tape in the sleeve and across the front and rear, a pair of comfy gloves and a Women’s 100 cap to keep the sun off my face.

And of course a huge thanks also to Ribble for the loan of their bike.

GPX file of Land's End to John o' Groats View
Cycling UK continues to support the UK to cycle
This remains true during this difficult period with the ongoing threat of coronavirus Covid-19
Read our latest advice on cycling
Join Cycling UK to help us change lives and communities through cycling
Membership gives you peace of mind insurance, discounts in cycle shops, rides & routes
Join now