Tour of the Hills - a Challenge Ride review

Tour of the Hills - a Challenge Ride review

With 73 miles to cover and over 2,400 metres of climbing, the Tour of the Hills in Surrey truly deserves its place in Cycling UK’s Challenge Ride series – but was it too much of a challenge for Cycling UK’s staff team plus friend?

In the Tour de France this year, team numbers were limited to eight riders. It therefore seemed appropriate to set ourselves a similar target for Cycling UK’s 'team' for the Surrey-based Challenge Ride, which took in some of the classic climbs of the South East.

As we gathered at 9am on an overcast Sunday morning, two were missing (I’m sure they both had very good excuses…). Cycling UK member Caren Hartley from ISEN Workshop, stepped into the breach and donned a Cycling UK t-shirt, making us a magnificent seven, and by 10 to 10 we were given a rousing send off by organiser, Mark Waters of West Surrey CTC.

Heading up Combe Lane, the first climb of the day and scant metres from the start in Shere, I was grateful for two things: the warm-up run into Shere from my home in Bramley and also the loan of ISEN Workshop’s All Season bike. The first had set me up for the stiff climb up onto the North Downs, while the ISEN made that and every successive climb feel far easier than every other time I had given them a go!

The Tour of the Hills is one of Audax UK’s Brevet Populaire events, and is billed as “one of the most compact and challenging routes anywhere in the UK” on their website. It takes in some classic climbs well-known to even those outside of Surrey, such as Box and Leith Hills, but it also throws in far more challenging ascents (at least to my mind!) like White Down Lane and Barhatch Road.

The Tour of the Hills is... billed as one of the most compact and challenging routes anywhere in the UK

As is the nature of long rides, particularly when hills are involved, our 'team' soon naturally split into two as we all adjusted and settled into our own comfortable speeds. Keir, Nik and Sam’s collective bottoms disappeared well before we had reached Combe Lane’s summit at a speed which was impressive to witness and impossible to emulate, and the rest of us rolled along.

I ride regularly with Ian and Julie, and we had all ridden together with Caren on the Dorset Gravel Dash back in May, so it felt like we were all together on a little tour again – though unlike a tour there were far more fellow cyclists out, and I had swapped my shire horse of a touring bike for a thorough-bred all terrain mountain muncher of a bike.

We lost Julie on Ranmore Common, on the top of the North Down’s Way, as she went to see if an uncle of hers had left some honey out for her along the way (he hadn’t unfortunately), and as a three rode along the narrow lanes and gravel-strewn roads to Westhumble, passing the sadly closed (for the holiday) Pilgrim Cycles along the way.

For me, the worst spot of the ride came at this point, as the route briefly joins the A24, a fast road where other road users have very little sympathy for people on two wheels. While waiting for an opportunity to cross, I spotted Julie on the other side having wisely chosen a signed underpass, rather than braving the traffic. 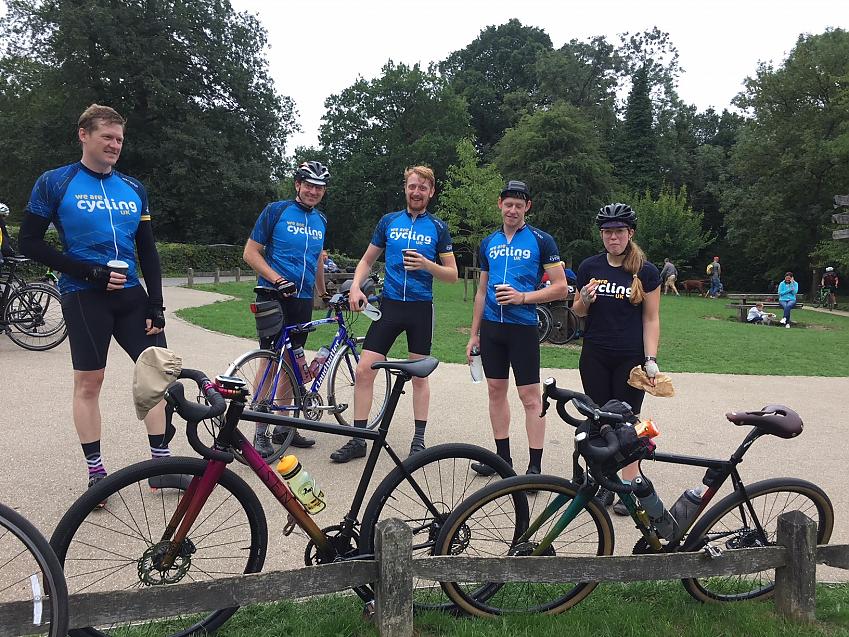 The Cycling UK team at the top of Box Hill

Despite the awfulness of the traffic and junction, this is a popular spot for the weekend cyclist, as it’s the only way to reach Box Hill from the west side of the North Downs. Thanks to the London Olympics, even people with no interest in cycling have heard of Box Hill, and it really is a pleasant climb, in part down to the quality of the road surface, which is still bearing up well six years after it was laid. The view might be better going down the switchbacks than up them, but you can still snatch a glimpse and enjoy how the countryside opens up between the trees – though with the amount of traffic, both motor and cyclist, you do need to keep an eye out on the road ahead!

While the climb is a pleasure in itself, for me it is ruined by the way people steam up past you silently and without warning. It makes for uncomfortable cycling to have to be constantly checking over your shoulder – a simple “passing” or “hello” would suffice – and some 500m from the summit after the umpteenth person had wheezed past me, I saw red and after granting them a 50m head start gave chase.

They turned into the café at the top of Box Hill scant metres ahead of me, but I felt vindicated as, thanks to my new bike, I had pretty much flown uphill without feeling blown at the summit - unlike my quarry – and I’d managed to give a cheery “hello” to those I’d passed too! 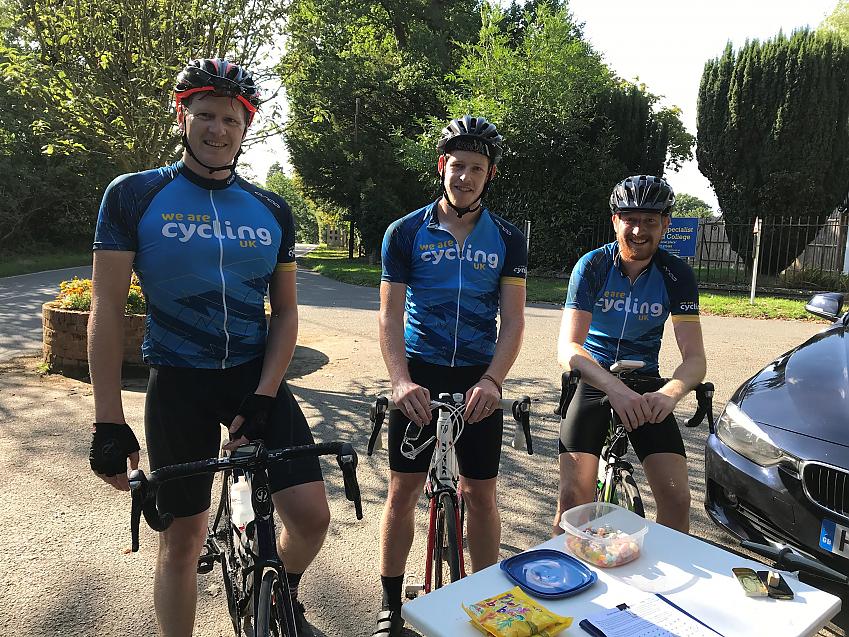 As the miles sped by (especially when whizzing downhill), I began to think about what made the Tour of the Hills so special for me as an employee at Cycling UK. It took me a while, but slowly it sunk in. The smiling volunteers dolling out much needed jelly babies and waters at the check points, the cheerful and eclectic band of cyclists at the start, my friends and colleagues all along on the ride – events like these and everyone involved in them are all very much an essential part of our cycling culture in the UK, which deserves to be celebrated and enjoyed.

Working in campaigns, the focus of our work is so often on overcoming the latest barrier thrown up by Government or an injustice that needs to be righted. Sometimes it’s easy to forget the reason why Cycling UK fights so hard – namely that cycling is great fun and everyone deserves to enjoy it safely and responsibly!

Across the UK, every weekend and throughout the week there are Cycling UK members, like Mark Waters and his jolly crew at West Surrey CTC... creating a home away from home for those who ride regularly, and enticing new folk in.

Across the UK, every weekend and throughout the week, there are Cycling UK members, like Mark Waters and his jolly crew at West Surrey CTC who manned the check points, putting on similar events and club runs, creating a home away from home for those who ride regularly, and enticing new folk in. They might not recognise their work as volunteering, but it is their time, effort and selflessness that makes Cycling UK and our members such a thriving community. 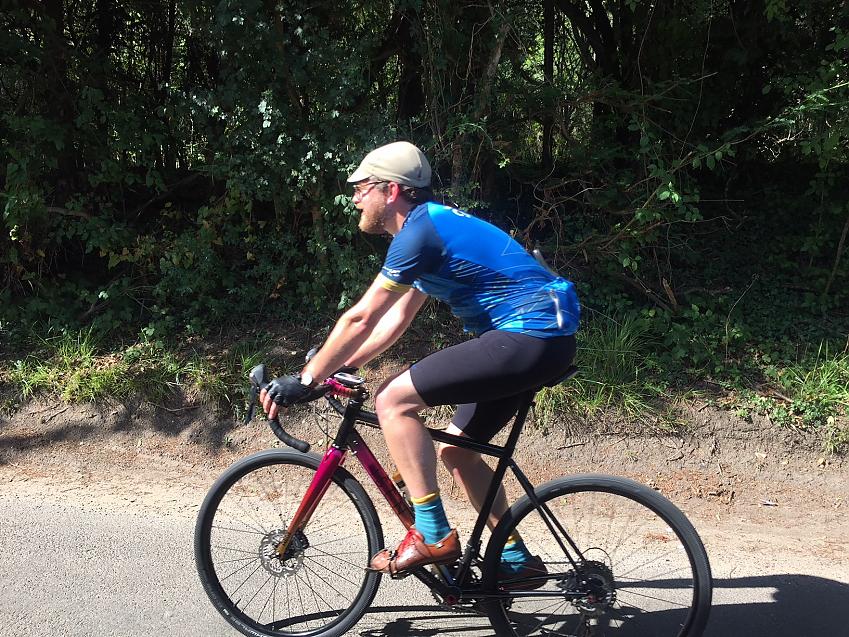 Sam gliding along on his new favourite steed

Being on the ride was a wonderful opportunity to meet so many of them. Whether it was just to have a chat about my Cycling UK top, how to travel with your bike on Eurostar, which hill has been the worst, or why I was polluting the ISEN All Season with Campag pedals from the 70s and toe clips (answer: I’ve yet to try clipless), all of these conversations helped me feel that little bit prouder to work for an organisation that has tirelessly been fighting for our members, cyclists and everyone who might like to cycle for 140 years.

Grinding up the last hill of Barhatch Road with only three miles to go till the end, I really didn’t want the ride to finish, partly because I didn’t want to be parted from my new favourite bike, but really because it had been truly great day out.

While sadly I didn’t finish within the cut-off time (oh the shame of seeing the letters ‘DNF’ by my name!), I did receive my Challenge Ride medal and already have my eyes set on the next nearest Challenge Ride to me, Wessex CTC’s Gridiron in October – I look forward to seeing you there! 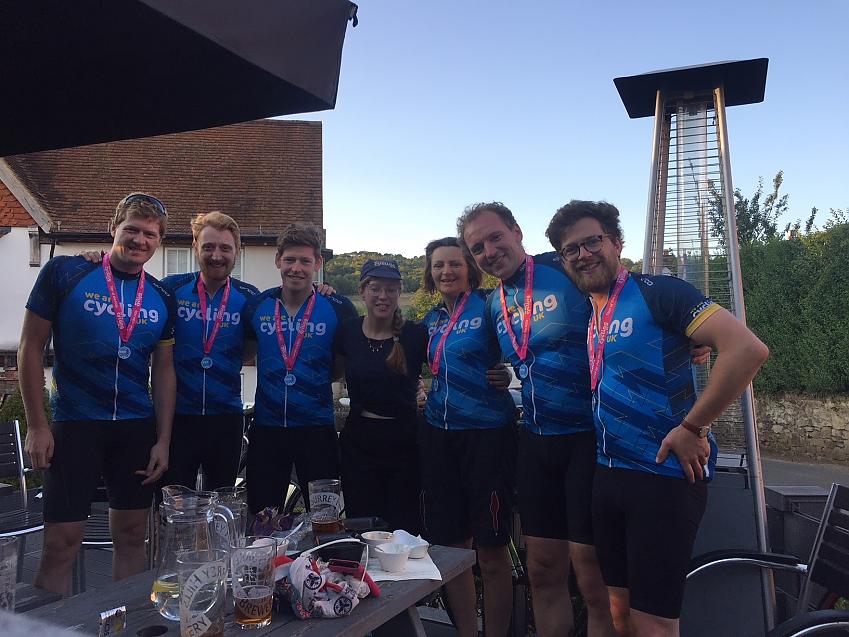 Cycling events are back! West Surrey Cycling Club's Tour of the Hills is a great success View