The solace of solo riding

Jo is the cartoonist behind MBUK magazine’s Mint Sauce
By Jo Burt
Wednesday, 27 May 2020

The solace of solo riding

Solo cycling gives us so much more than exercise. On his short local loops, Jo Burt finds freedom and adventure.

The common narratives of cycling tend to focus on specific themes. There is the Epic: covering massive distances, battling valiantly against weather and gradients. Hand in hand with this romance of mileage and teeth gritting is the tale of the solo rider, often one that’s bewitched by cross-continent efforts. Then in complete contrast there is the chummy camaraderie of the group ride and coffee stop. What is rarely celebrated is the simple pleasure of the quick solo ride.

It can get stuck in our heads that you have to be out for a significant number of hours for it to constitute a Proper Ride, so it’s easy to forget that it’s perfectly okay to just nip out for a quick spin – and that doesn’t mean smashing out training reps of the nearest hill either. There has always been much to be enjoyed in shorter local rides on your own, being a smooth, swift, and efficient hushed respite amongst all the noise and clutter. 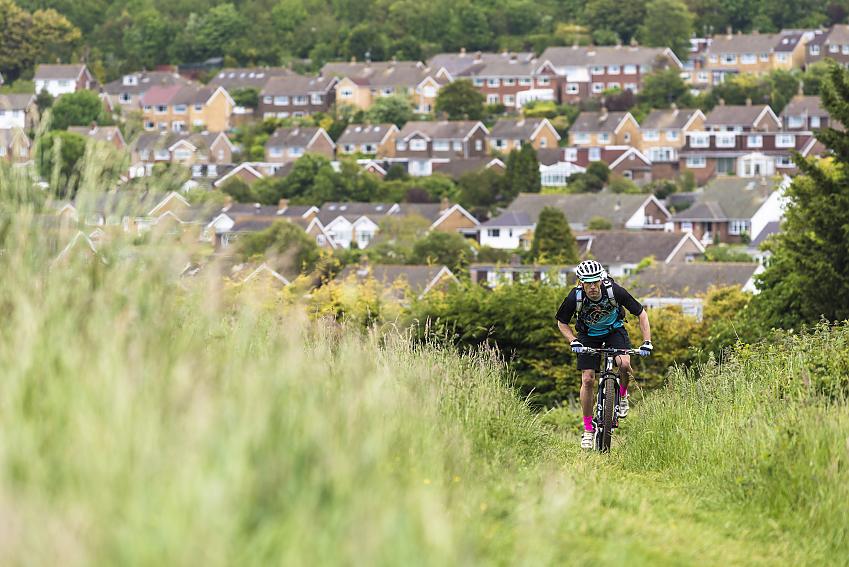 It’s completely reasonable to be utterly overwhelmed by the current, constant onslaught of news, opinion, social media and conspiracy theory, but thankfully in the UK we’ve been allowed outside throughout, for a short non-hazardous time, initially on our own. We could and can use this as a vital way of taking a break from the world of troubles.

Even before the lockdown restrictions, there were days when it wasn’t possible to head out for a multi-hour three-figure schlep, be that for time, weather or wavering inclination. If I’m beleaguered by limited desire or hours for a big ride, I have accumulated a hefty arsenal of quick local escapes, a route buffet that has come from living here for quite a long time, exploring all the spaces you could fit a set of handlebars down within a 25-mile radius, and getting lost a lot. Within two minutes of shutting the door, I’m down a sneaky rat run and away from everything.

One of the beauties of a solo jaunt is leaving whenever you like and just going for a ride. There’s no rushing to make it to the start of the group ride and then hanging around for that person who’s always late. Going it alone is a much more simple affair, and has been the preferred mode of cycling to many not just for the efficiency – avoiding the usual group faff can mean you’re ten miles up the road before that social ride has sorted itself out – but for the silence and solitude it brings too.

Making the most of your neck of the woods means steering away from all your usual routes, the ones you do over and over because you don’t have to think where to go, know how long they take to the minute, you’ve got a PB to beat, and are probably a little bored of now. Stop that. Be inquisitive and snuffle around instead.

Go down that road you’ve never been down, wonder where that bit you’ve ridden past 100 times ends up, investigate that hole between the fences.

Go down that road you’ve never been down, wonder where that bit you’ve ridden past 100 times ends up, investigate that hole between the fences. You won’t hit cycling nirvana every time, and more often than not you’ll reach a dead end, but you might discover bits of your neighbourhood you never knew existed, find something new to ride along that can be a useful addition to your route menu, and have a giggle.

Wherever you live there will be a tangled web of lanes, passages, towpaths, underpasses, snickets, alleys, twittens, ginnels and twitchels that you can poke your front wheel down and find a whole new world of hidden roads and back-alley fun. If you’re city based and would usually have to endure a tedious slog to find countryside, make use instead of all the urban green spaces and weave them into a side street and parkland scamper. 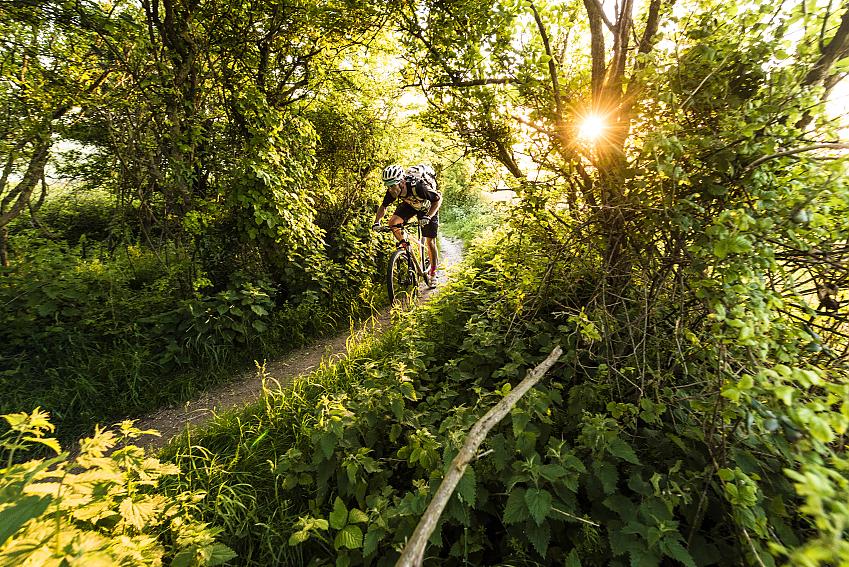 No staring at the stem

Whilst we’re in the mood for escaping, this would be the perfect time to disconnect from the screens you’re continually looking at, be that phone, computer, monitor or TV. You don’t need another rectangle of pixels on your handlebars so remove the bleeping box and just go for a ride. It’s okay to forget speed or mileage or where to go for now. Find escape by distancing yourself from all that. If you rely on stats it might feel a bit weird but you’ll soon enjoy the calm space in your head that’s usually taken up with the endless feed of input.

Be the opposite of your usual planned route riding, pedal aimlessly, and get lost. When was the last time you deliberately got lost? There’s a lot of adventure to be had within your postcode. Get lost and then get unlost. Stumble into an “Oh, I’m here” moment. Did you ever just razz around town on your bike as a kid with no particular destination in mind? Do that again but pretend you’re a grown-up.

Escape doesn’t have to come from distance or place; it can be found in emptying your mind of clutter.

If you have a mountain, cyclocross or gravel bike in your collection you can extend this local lap concept to include any area of parkland, urban woods and scruffy bit of in-between land. I have a fun from-home loop that disappears down all the spaces in between the houses, and I can happily occupy myself for a good couple of hours without ever being more than five miles away. It took me years of local knowledge, looking at maps, zooming in on online satellite images, and ending up in people’s back gardens to stitch together. 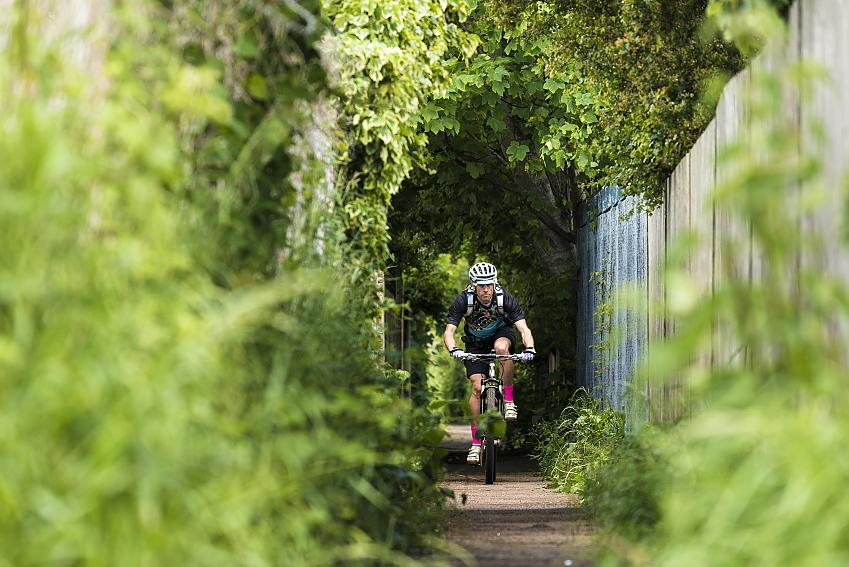 Doing a short ride within easy reach of home doesn’t have to be any less worthy than what you’d consider a Proper Ride; it can be very satisfying, just different. If you want to throw some effort in, sprint up the hills. If you want a bit of fun, then squirrel your bike along terrain that’s beyond the design brief of the tyres, or jump on the off-road machine and muck about in that finger of woods by the park. Think outside your normal.

Escape doesn’t have to come from distance or place; it can be found in emptying your mind of clutter. Riding in a place you know intimately, with the freedom to change the route to suit your mood, not bothered with distance, speed or other people, and knowing you can be home for tea in minutes, can allow what’s stuck in our heads to disappear completely.

Plan your own local cycle ride.

Whenever you ride on your own there are some straightforward common sense guidelines to follow:

Be self-sufficient
Take the tools you need to mend the most likely mechanicals, plus a spare tube or two, and a pump that works. This shouldn’t need to be said, really.

Let someone know where you’re going and how long you might be.
Download a tracking app for your phone if you’re paranoid.

Take a phone.
You’re not a Pro so don’t call for the team car if something goes wrong; try and get yourself home if possible. Store an ICE number in there.

Take it steady.
Not that you start each ride with the intention of heading to A&E but turn down the risktaking, eh?

Taste of Cheddar is one of Cycling UK's favourite short rides.

How to: Plan a local cycle ride View