Second lockdown provides another chance to create space for cycling

Second lockdown provides another chance to create space for cycling

The second national lockdown in England provides a chance for local authorities and the Government to rethink our transport options in the context of coronavirus.

Last week, we reported that despite only 59% of people returning to their workplaces, motor traffic was almost at 100% compared to the same period last year. A continuation of this trend would mean that a full return to work could trigger gridlock throughout the country.

England’s second national lockdown announced over the weekend, however, provides an opportunity for councils and the Government to address the issue, by taking steps to encourage people to leave their cars at home and opt for active travel options like cycling and walking, especially for shorter journeys.

Support space for cycling in your area

During the first lockdown, the Government announced the Emergency Active Travel Fund, which provided financial support for local authorities to make speedy interventions to encourage cycling and walking, and to help with social distancing. 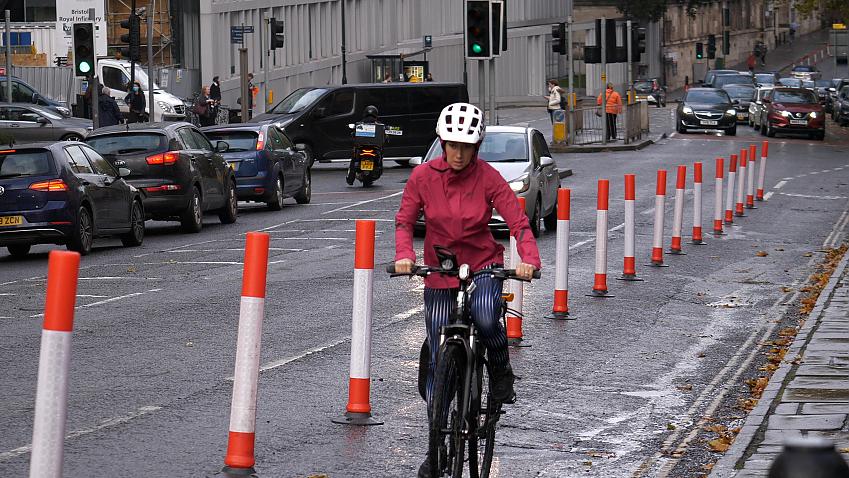 Simple 'wands' can create protected cycle space on many roads

The results were varied: local authorities like Leicester, who were able to create routes which were already part of a longer term network plan saw positive results, with cycle lanes being well used and helping to move people around the city more efficiently.

Other authorities, especially those which were less ambitious in their plans, received less funding, with short stretches of cycle lanes or widened pavements often failing to provide viable alternatives to driving for many people.

Although the second lockdown is likely to trigger a drop in motor vehicles on the roads – albeit not to the degree of the first – when things do open up again, it’s clear more needs to be done to entice people out of their cars. With the latest statistics showing that national rail usage is still only around 30% compared to this time last year, and busses sitting at around 60%, cycling and walking has to be key.

The second round of the Emergency Active Travel Fund - due to be announced imminently – therefore represents the perfect opportunity for local authorities to act with ambition and make interventions such as protected cycle lanes along key commuting corridors.

Unfortunately, some councils are facing a vocal backlash from some corners of the press, despite polls showing that most people support measures to promote cycling and walking in their local areas. That doesn’t mean that some interventions introduced quickly shouldn’t be improved, but it does make it more important than ever that authorities know they have the support of their constituents.

You can help get that message to your local decision makers by writing to your council leader and local councillors today.

Support space for cycling in your area

10 things to do on a bike during lockdown View