Reflecting on an ‘incredible year’ at the Cycling UK Scotland AGM

Reflecting on an ‘incredible year’ at the Cycling UK Scotland AGM

Cycling UK members, volunteers, staff and friends got together in Edinburgh to look back on an amazing year and share plans for 2020.

Cycling UK members, volunteers, staff and friends gathered in Edinburgh on Saturday 9 November for the Cycling UK Scotland AGM. The event is always much more than a meeting and this year featured an impressive array of talks, presentations and rides.

The keynote speaker was Active Nation Commissioner Lee Craigie, who talked about the importance of political bravery in enabling more people to walk and cycle. Reflecting on her first year in post, Lee said she started with health as a key priority but over time has realised that climate and social justice are equally important themes for her work.

She also showed an inspiring video of her work with teenage girls through the Adventure Syndicate – a Cycling UK affiliated group – enabling and empowering them to cycle and push themselves further than they thought possible. 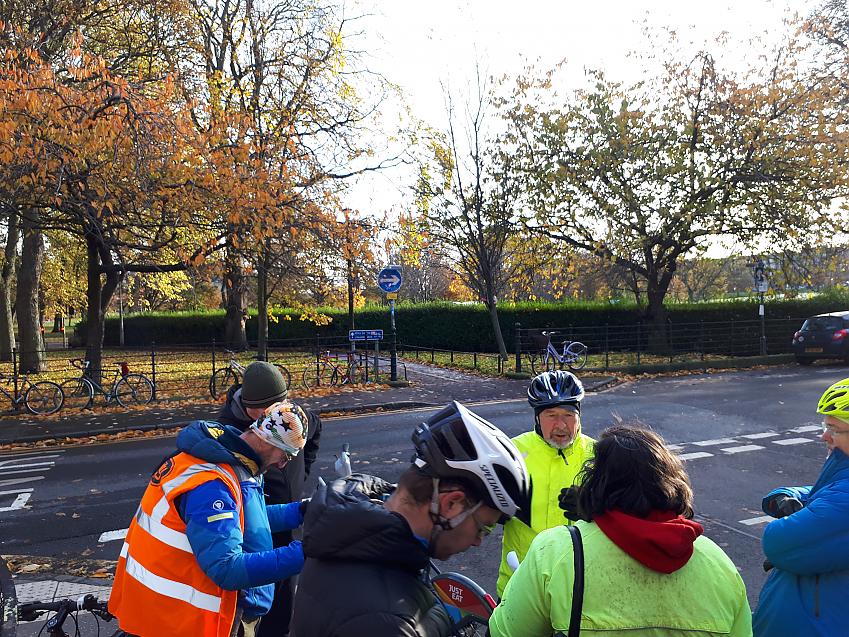 The day started with a infrastructure tour by bike

Suzanne Forup, our Head of Development for Scotland, described an ‘incredible year’ for Cycling UK and the people we work with in Scotland.

In 2019 we’ve opened new projects like the Ardrishaig Bothy and Edinburgh Handcycling Experience, grown our staff team to 30 people and generated more than £1m of project funding for our work to enable more people to cycle.

Suzanne said: “We've seen another year of increased reach and impact across Scotland, not just in terms of figures but also in the lives we've touched and stories we've heard.

“It's a pleasure and privilege to report on our work to our members and partners, to share the progress and learning as we work together to help millions more people cycle.”

I think we were all inspired to get out on the bike a little more often, whether it's two miles or 200!

“From those starting out on two wheels, overcoming all kinds of challenges, or pushing themselves with epic distances and stunning scenery. I think we were all inspired to get out on the bike a little more often, whether it's two miles or 200!”

“I'd like to thank last year's committee for all their efforts and support to Cycling UK. Some longstanding committee members stepped down this year and I would particularly like to thank Gary Cummins, Peter Hawkins and Donald Urquhart for their service."

Earlier in the day, the gathering kicked off with some excellent group rides – to check out local cycling infrastructure, both good and bad, and to enjoy Edinburgh’s beautiful scenery.

Later, Cycling UK members gave a variety of fascinating talks, sharing their experience and expertise on topics from cycling and creative writing to perceptions of safety in cycle lanes.

Janet Kerr shared her inspiring story of cycling the North Coast 500 solo, three years after being diagnosed with Parkinson’s disease. Battling chronic pain, 50mph winds and an unexpected back injury, Janet completed her challenge and raised thousands of pounds for charity.

We've seen another year of increased reach and impact across Scotland, not just in terms of figures but also in the lives we've touched and stories we've heard.

George McDermid spoke about the Kirkpatrick Macmillan Cycle Rally, which recognises the Dumfriesshire blacksmith who is widely credited with inventing the pedal-driven bicycle.

Next year’s event – organised by CTC Dumfries and Galloway over the May Bank Holiday – will celebrate the 180th anniversary of Macmillan’s invention. George encouraged all Cycling UK members to get involved.

Professor Chris Oliver shared lessons learned from decades of cycle campaigning, covering a range of issues from helmets and trams to cycling for the deaf, and much between.

Afterwards, he commented: “Most cycling AGM’s are frankly dull. It was very interesting to start the day with an infrastructure ride to see planned developments… in Edinburgh.

“The [presentations] were diverse and well-focused, creating useful debate. Lee Craigie gave an impassioned presentation showing that her plans are beginning to have some traction in the active travel world. I hardly noticed the formal AGM meeting, but it must have happened.”