Cycling UK member Gina Harris only took up cycling in her 50s, but she has raised thousands of pounds for charity by taking on one of the UK’s most iconic cycling challenges. She spoke to digital officer Rebecca Armstrong about her achievement

Cycling UK member Gina Harris rode to our attention when she decided to take on the epic Land’s End to John o’ Groats challenge in order to raise money for two women’s charities.

LEJOG, as it’s affectionately known, is an iconic long-distance cycle ride that goes (you guessed it!) from Land’s End in Cornwall to John o’ Groats in Caithness. Going from the south-western end of the UK to its northern tip, it’s also sometimes referred to as the End to End.

It’s around 1,000 miles – there’s no set route (but you can download the Cycling UK GPX files) and actual distances differ depending on the rider. It can also be ridden in the other direction, in which case it’s known as JOGLE.

It’s a huge challenge for any cyclist, but at 82 years old the retired photographer from Birmingham was also set to ride into the record books as the oldest woman to complete the ride. So why did she decide to take on this legendary ride?

Gina said: “I am appalled by the stories of shocking abuse and cruelty to women and their children and because public services are insufficiently funded to help people in this predicament.

“I was looking for a way to raise publicity and much-needed funds for two charities which work to combat domestic abuse. So many victims and their children have had their lives blighted by this horrible crime which greatly increased during lockdown.”

Research shows that worldwide more than a quarter of women and girls (27%) will experience domestic violence, while two women a week are killed by a current or former partner in England and Wales. This is against a background of continued government cuts to women’s aid.

Refuge and Women’s Aid are two charities working to support women and children suffering domestic abuse. It was these two organisations Gina wanted to help, but she needed a hook. As a keen cyclist, something on a bike made perfect sense.

“It was my son Pascal who suggested that it might be an appealing idea if a woman of my age were to take on the End-to-End challenge,” she comments, “especially if I could get into the Guinness Book of World Records.”

Gina undertook the ride unsupported, although she was joined along the way by friends and family – both to keep her company and, she says, to ensure she didn’t jump in a taxi at any point!

Her ride was an old steel touring bike and she carried most of her own luggage – friend Paul Webster and his wife followed in their car with some of the heavier items. Paul also joined her on his bike on some sections of the ride. To keep the weight down a bit, Gina stayed in hotels, hostels and B&Bs rather than camp. 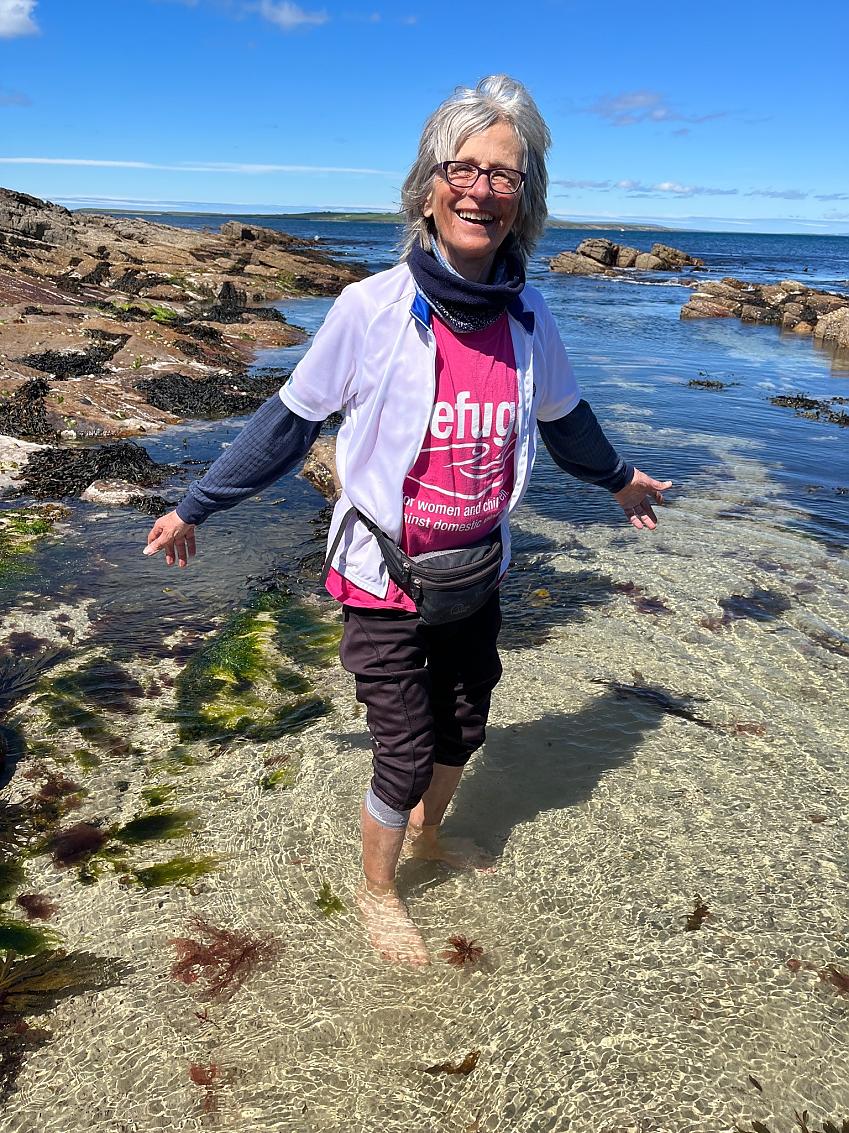 Gina paddles in the sea at Dunnet Head in northern Scotland

You might think that Gina is a life-long cyclist, but this isn’t the case. She cycled a bit when she was young: “When I was a child, I used to borrow my brothers’ bike. They mainly used it on obstacle courses of bricks and planks, like the equivalent of stock car racing. I can’t remember if it had a pump; it certainly couldn’t have been considered roadworthy.”

It wasn’t until later in life, when she turned 50, that Gina took up cycling again. “I acquired a shopping bike and a friend suggested that I try cycling on Sundays with the local cycling club.

“Not long after that I bought a Raleigh Royal, a real touring bike – and I still have it.”

Although it was when her children started riding that she joined Cycling UK, saying: “I felt that the legal protection on offer was indispensable.”

Gina started her epic journey on 27 May, completing it 28 days later on 23 June. Along the way she battled cold and wet weather, heavy traffic in some built-up areas, poor road surfaces in some places, a recalcitrant Garmin and mechanical issues.

“I had a bad day when my toe clips fell apart; I can’t be persuaded to use cleats! Worst of all, though, was the need to talk about my age in the interest of publicity – and even to trumpet it! What woman wants to do that?”

But these challenges were balanced by lots of high points, including “my journey through a constantly changing and beautiful landscape up the whole length of Britain; the many nice surprises along the route; and the interesting people I met and their incredible niceness in donating to the charities”.

Gina also enjoyed “the music of changing accents from extreme south to extreme north and the anticipation of a new place to stay in each night with a nice meal and maybe a hot bath. All that was especially nice to contemplate when it was cold and wet.” 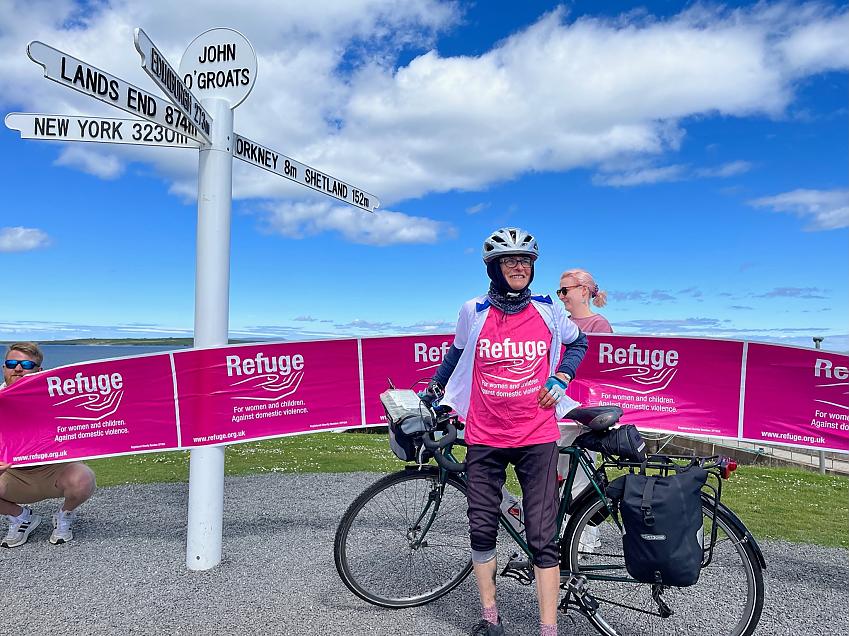 In total, Gina covered around 970 miles: “I did a bit extra and cycled to Dunnet Head, which is north of John o’Groats.

“It was the sunniest day of the tour, and this is a most beautiful spot, with just Puffins and other seabirds to share it with – apart from Pascal who was cycling with me on this stretch.

“When I got to the end, I felt a mixture of relief that I had done it and escaped any severe weather incidents, but also nostalgia and sadness that the wonderful experience was all over.

“I knew I was going to miss my life on the road and I already do.”

She doesn’t know if she’s an official world-record holder yet, as it takes time for the committee at Guinness World Records to assess all the evidence. But she’s certainly not ready to give up cycling.

“I’m not ready to give up cycling just yet. I still enjoy it, and anyway I don’t have a car. I’m even thinking about another big ride, but I'm not yet sure of the exact details.”

She has some great advice for anyone later in life who might be thinking about taking up cycling.

“If you feel like trying cycling, why not just borrow a bike and give it a try?

“Don’t be put off by other peoples’ negative attitudes: they should decide for themselves but not for you. There are plenty of Cycling UK groups for older people. A group in my area of Birmingham has members in their 80s and even one who is over 90.

“Traffic can be very daunting. If you don’t fancy going along busy roads, there may be a network of cycle paths in your area just waiting to be discovered.”

You can read more about Gina’s journey on her blog.

Father and son take on LeJog for the record View