The history of the Cape Wrath Fellowship

The history of the Cape Wrath Fellowship

For 70 years Cycling UK’s Cape Wrath Fellowship has put cyclists to the test. Located in Sutherland in the Highlands of Scotland, Cape Wrath is the most northwestern point of the UK. This rugged, windswept headland is renown for its natural beauty and challenging coastal path. Cycling UK historian Sheila Hanlon explains why The Cape Wrath Fellowship was founded in 1949 and why it has captured the imagination of thousands of intrepid cyclists ever since.

In 1949, CTC (now known as Cycling UK) member Rex Burgess Coley devised The Cape Wrath Fellowship. Coley was an touring cyclist and cycling journalist who wrote under the pseudonym “Ragged Staff.” He contributed to Cycling magazine and published books including “Cycling is Such Fun!” The Golden Book of Cycling described him as “a writer who finds, principally, pleasure from cycling, a constant stream of humour runs through his stories, stemming from a skill that can turn an everyday incident into a hilarious anecdote.”

Coley felt cycling lost its adventure in the aftermath of WWII. The joy of the club runs was forgotten and racing had become too serious. In 1946, Coley undertook a solo trek to Cape Wrath. He rode to Koeldale Pier and flagged down ferryman John Muir with an old scrap of fabric that he found on the shore. For 6 pence John rowed him across the Kyle of Durness to a lonely track leading to a remote lighthouse; it was one man and a bicycle against a vast uninhabited wilderness. This was just the kind of adventure that Coley thought cyclists needed.

The Cape Wrath Fellowship is announced

The Cape Wrath Fellowship was announced in The Bicycle magazine in 1949. To qualify, cyclists had to ride from Keoldale Ferry to the Cape Wrath Lighthouse. As proof that they completed the ride, cyclists sent Coley a photograph of themselves at the lighthouse. Successful riders received a fellowship certificate, place on the official members roll and letter of congratulations. Round blazer badges showing the lighthouse were introduced in 1965.

A Cycling UK member who completed the challenge in the 1980s recalled that he “received a really wonderful, gentlemanly letter from Rex Coley” which he kept along with his badge. Coley administrated the fellowship up to his death in 1985, when cycle journalist and CTC member Peter Knottley took over until 1992, it was then passed on to CTC (Cycling UK's former name). 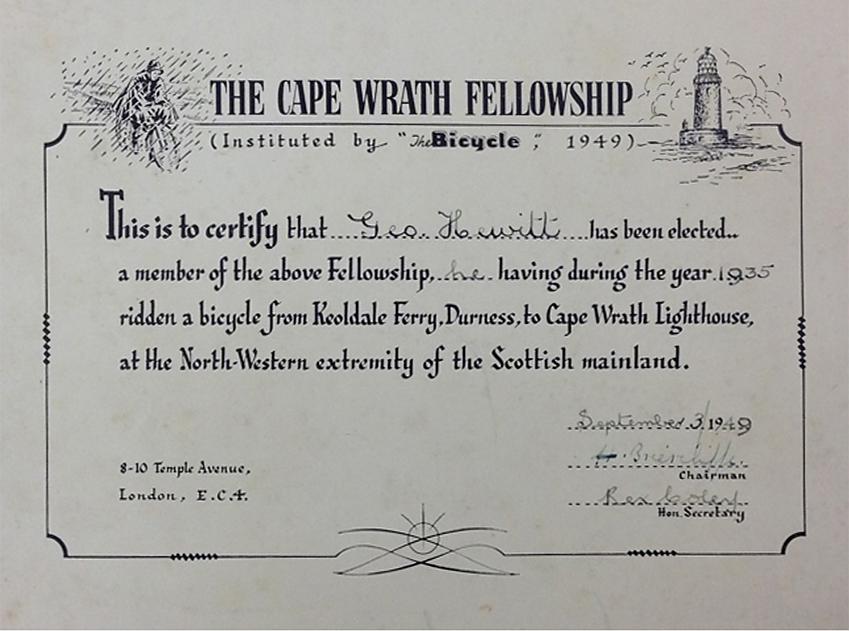 Cape Wrath is one of the most isolated corners of the UK. It consists of 280 km2 of uninhabited moorland known as the Parph. Its bleak sounding name comes from the Old Norse word “hvarf’ meaning turning point. The cape has a long history as a shipping hazard and its position on the North Atlantic makes it prone to dangerous gales and extreme cold. Soaring cliffs, rounded bays and seastacks dot the coast. The terrain is difficult and uneven with bogs, steep hills, loose rocks and moorland. A diverse ecosystem thrives in this untamed coastal wilderness, especially seabirds, golden eagles, cliff plants, dolphins, whales and red deer.

A 20 metre tall whitewashed granite lighthouse stands at the tip of the cape. Built in 1828 by Robert Stevenson, it is a Category A listed building. Other historic sites include Lloyds of London signal and shipping tracking stations, crofts and shepherd spielings, the abandoned settlement of Achiemore and ruins dating to the 18th century. The Ministry of Defence owns nearly 60 km2 and runs regular training including artillery practise. For the most part, however, it is an untouched wilderness.

Part of the magic of Cape Wrath is the local ferry. Though technically part of the mainland, the surrounding moorland is nearly impassable. The ferry runs from Keoldale Pier to the West of the Kyle of Durness. From there, a narrow 18 km road leads the lighthouse. The track is surfaced but rough with steep climbs, stone causeways and windswept sections. Chequered sentry boxes are a reminder that the MoD operates in the area. Near Kearvaig, you’ll find a bothy maintained by the Mountain Bothies Association. Diverging off the lighthouse path to the west will take you to beautiful Sandwood Bay. Finally, near the end of the main road, the sky opens up with a breath-taking view of the Cape Wrath Lighthouse and North Atlantic.

On the road to Cape Wrath

Thousands of cyclists have taken up the Cape Wrath Fellowship over the last 70 years. One of the first fellows named in 1949 was George Hewitt who completed the ride in 1935. His certificate is held at the National Cycle Archive along with a newspaper clipping describing the journey that stretches to about 6 feet long.

Betty Halliwell of Lancashire and her husband did trip twice – once on a tandem as newlyweds in September 1937, and again on a bicycle and tricycle for their Silver Wedding Anniversary in 1962. In a letter to Cycle Touring magazine, Betty said she was delighted to have the same ferryman on both times, adding “we do hope to get to Cape Wrath again for our Golden Wedding.”

Some trips went better than others. In 1972, Albert Winstaley pleaded for an exception to Coley’s rules for admission to the fellowship. Winstanley accidently did the ride backwards, from the lighthouse to the ferry. He warned, “It should never be attempted alone,” and claimed to have seen a mermaid at Sandwood Bay.

Several near misses led the CTC to erect a danger board on one of the steepest hills. But, the risk was worth it. A 1971 letter sent to Coley by a rider named Sam reads “I have travelled abroad extensively, but I have seen nothing finer than the ride to Cape Wrath.”

Cycling UK’s Bob Mace completed the challenge in 1980 as a test run of the Claud Butler Cape Wrath Special touring bike. Only 1000 of the original model were released, a high spec machine configured for travel and finished in ruby red. Mace set out from Euston Station, London with a team of BBC reporters. They took the sleeper train to Inverness then transported their bikes nearly 200 km by van to the Cape Wrath Hotel. A good night’s rest was in order before the effort of the morning.

Following Coley’s example, Mace flagged down John the ferryman at the Keodale Pier. Claiming not have lost a bicycle yet, John packed six passengers and their gear into the little boat with their bikes “laid over the ‘sharp end’… one on top of the other.” The group covered the cycle route at a casual pace, noting that potholes and loose stones were a constant hazard. At the lighthouse they signed the visitors book and set up camp. Luckily, a gale force seven forecast turned out to be wrong and they enjoyed a glorious sunny evening before crawling into their tents. The next morning, they rode back to the ferry point in near silence, entranced by Cape Wrath’s landscape.

More recently, racing cyclist and writer Michael Hutchinson chose Cape Wrath as his top destination for Cycling UK’s “140 Rides.” In a 2017 Cycling Weekly article, he explained, “I have always wanted to do this ride through the wild and lonely landscape and stand on the Cape with nothing between me and the Arctic but the puffins…While there was nowhere I’d rather have been, there and back is still the longest 22 miles I’ve ever ridden. Rain, hail, warm sunshine and blasts of freezing wind came in every combination. I’ve never felt so far-flung or vulnerable.”

Adventure Syndicate co-founder Lee Craigie and Andy Toop's adventure in 2015 to Cape Wrath involved packrafts and fatbikes. Kirk Watson made a beautiful film of the journey with amazing drone footage.

Another short film Beulah, named in honour of the ferryboat, follows the Pannier Cycle Club on their way to the Cape Wrath Lighthouse.

Cycling UK continues to administer the Cape Wrath Fellowship. The route and rules remain the same—ride from Keoldale Ferry to Cape Wrath Lighthouse. Submit a photo of yourself at the lighthouse with your bike. Your name will then be added to the roster of fellows.

The Cape Wrath route is difficult and best suited to mountain bikes. Be sure to plan ahead, check the weather and pack all essentials, as you will be on your own for much of the journey. There is a mobile connection, but it is weak. The Cape Wrath Ferry operated from from Easter to October weather permitting. A mini bus serves the lighthouse in peak season.

Campers have an abundance of pitches to choose from. Accommodation is also available at the Kearvig bothy, the lighthouse bunkhouse and in Durness village.

In 2009 a local family opened The Ozone Café in one of the lighthouse buildings. With room for 8 customers, it is probably the most remote café in the UK. It’s open 24 hours a day, 365 days a year—even when the ferry doesn’t run—so cyclists are always guaranteed a hot cup of tea.

Join the Fellowship of Cape Wrath

To get the Cape Wrath certificate simply fill in the online form and upload your evidence.

Plan your trip to Cape Wrath

Are you already a Cape Wrath Fellow?

Cycling UK would be interested in hearing your story as we celebrate 70 years of the Cape Wrath Fellowship. If you have a story to tell please email publicity@cyclinguk.org