They're a handy mid-ride pick-me-up, but which energy bar will keep your taste buds happiest? We test three popular brands, plus a DIY option

Everyone knows that cake is the best cycling fuel, but these days you never know whether a café is going to be open on your next ride. Energy bars are a worthy alternative: they are conveniently wrapped, have a long shelf life and are generally robust enough to stand up to a long journey in a jersey pocket or stuffed into a bag.

But while they will certainly give you some much needed nutrients and calories to keep the pedals turning, the vital question is: do they actually taste nice?

Our team of testers happily stepped up to the plate (not that a plate was needed) to try out three bars from popular brands, along with a wild card: home-made parkin, as featured in the October/November issue of Cycle magazine. (Note: some of our testers adapted the recipe to this vegan-friendly version. All of the commercial bars we tested are 100% vegan.)

Here are their reports: 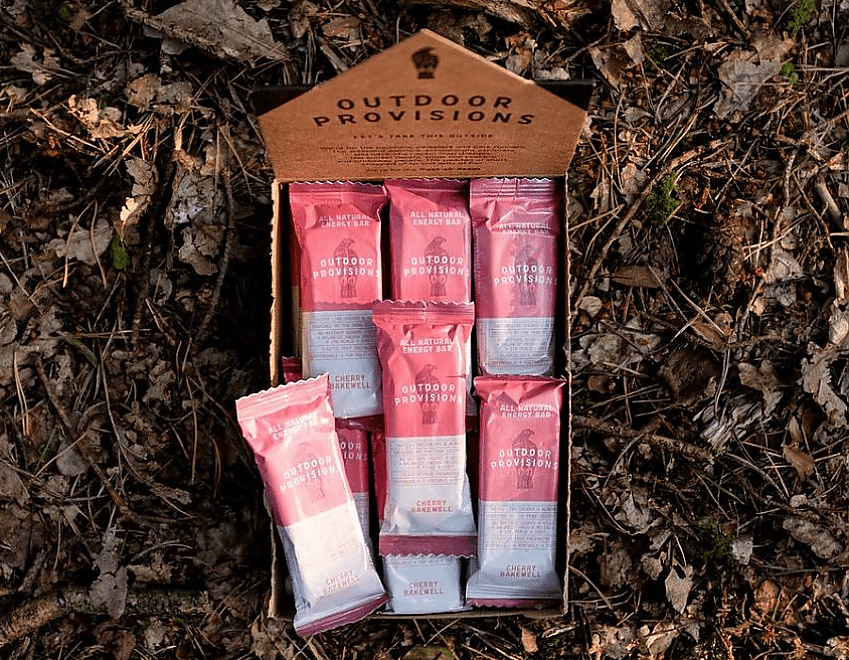 Cycling UK members can get a 20% discount on Outdoor Provisions products.

“I found the balance between the cherry and marzipan spot on, and would have happily scoffed two a go, as they’re not the largest of bars. They’re relatively easy to unwrap and munch mid-ride without getting mucky fingers on the bar. Another nice thing about these bars is the compostable wrappers – a neat touch. In cold weather they are a bit on the chewy side, so it’s probably worth keeping one in a pocket so body warmth can make them a bit more manageable.”

“A dense bar with hints of marzipan coming from the cherry and almond. It can be a bit sickly after eating the whole thing, it certainly fills that empty hunger feeling when you’re on the go, but the strong flavour may not be for everybody.”

“A small but substantial oaty bar with a nice cherry flavour, but despite the almonds I didn’t get a lot of marzipan, which - let's be honest - is the best bit of a bakewell! Took a fair bit of chewing but that might have been down to the cold weather.”

“My kids thought it was raspberry flavoured and not like a cherry bakewell at all. It is the smaller of the bars but packs in a lot of calories per mouthful, and I did feel much more energised afterwards. It was rather compact and didn’t crumble. I liked the fact I recognised all of the ingredients as something I would bake with in my own kitchen." 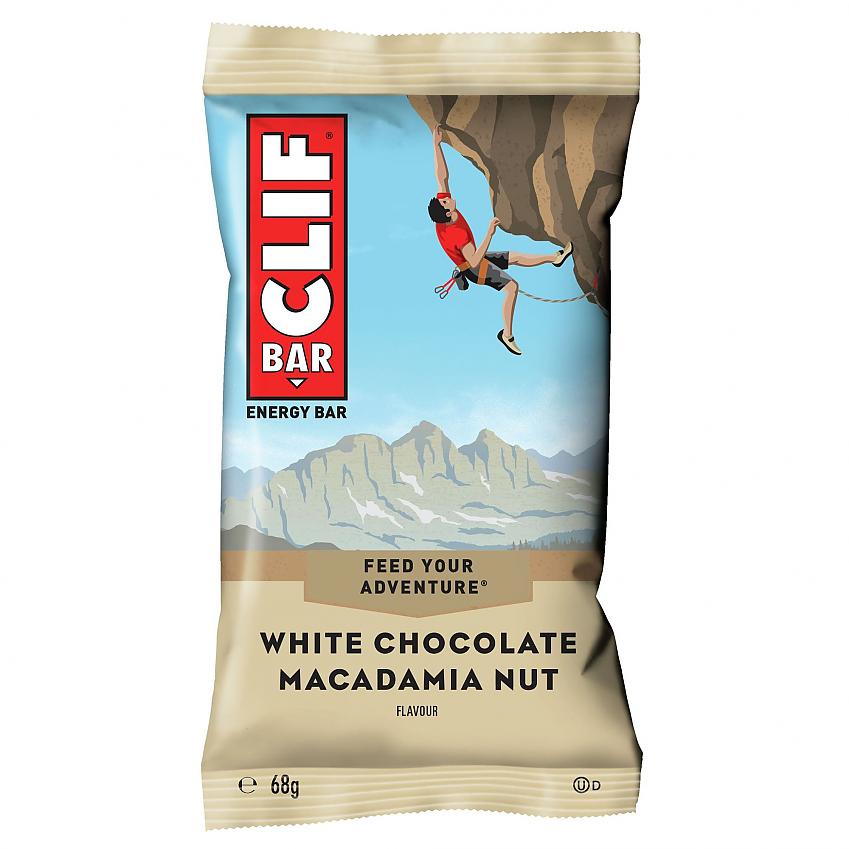 “The sort of chewy bar I’d have eaten as a nipper to remove those troublesome wobbly teeth. Definitely best eaten from the pocket rather than the saddle bag! The white chocolate icing looks quite attractive and I enjoyed the nuttiness – though not sure the macadamia nut came through especially well. It’s a solid bar and will fill a hole well, but it’s quite stodgy, and best washed down with some water when on the go.”

“Definitely my favourite. Squidgy, nutty and chocolatey, with nice swirls of (vegan) white chocolate icing on top. I’d happily pay for one of these in a café with a cuppa – although you do need a drink as they are quite sticky. Don’t try and stuff one into your mouth while riding unless you have very strong jaw muscles! Contains nine grams of protein and feels more like proper fuel than a quick energy burst.”

“A slightly sticky bar with a delicate crunch and satisfying chunks of macadamia nuts and white chocolate, which is also drizzled over the top. Delicious and sweet. but not so sticky that it leaves any residue on the hands, making it perfect for the trails. The oat base and the added vitamins and minerals make this a substantial bar to fuel you on a day ride.”

“The all-round favourite for me. It has a good nutty flavour and wasn’t overly sweet. It also has a nice white chocolate drizzle pattern in the top. The texture was bendy but firm and it was easy to chew and left few crumbs. I wouldn’t want to eat two though, as they are really filling." 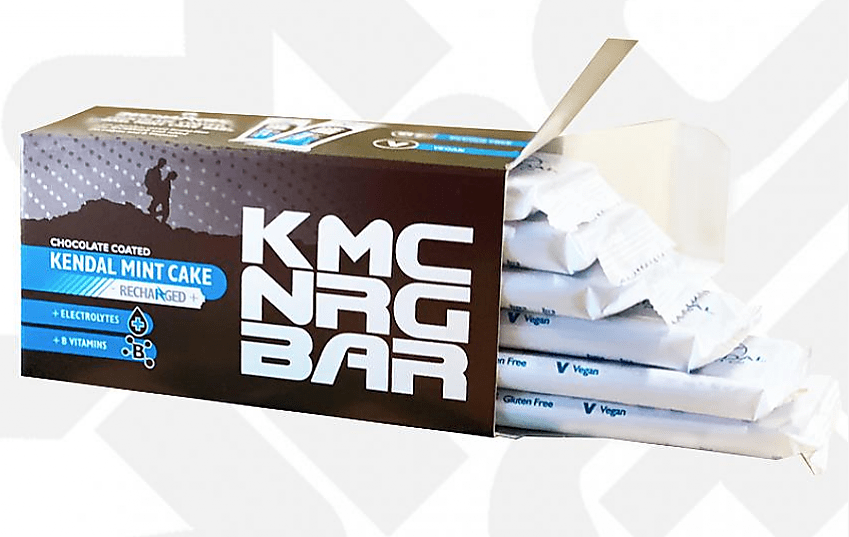 “It’s hard to tell the difference between this and a conventional Kendal Mint Cake if I’m honest – which is good as I like the original, in small doses. As you’d expect, it’s like an After Eight mint on sugary steroids. You get the punch of mint followed by a burst of sugar that’s tempered somewhat by the bitterness of the dark chocolate."

"Given the high sugar content, I found I didn’t feel the need to eat vast amounts at once – a first for me! However, these are fragile bars which don’t seem to enjoy bouncing around a bike bag, so perhaps best opened when in company you can share it with."

“An absolute classic, this Kendal Mint Cake is particularly delicious. It’s smoother than other versions I’ve tried, and the amount of peppermint is perfect. Be careful though not to get it too warm, as it can get stuck to the wrapper making it not the cleanest bar to eat on the go."

“Ah, this takes me back to hiking up mountains when I was in the Scouts. Despite the down-with-the-kids ABBRVTD name, it's basically good old-fashioned Kendal mint cake with a chocolate coating. Pretty much pure sugar, so you get an instant energy burst, but the strong peppermint and dark chocolate kick mean it’s not sickly sweet. It dissolves quickly in your mouth, too, so it needs less chewing than the cereal-based bars – saving a few vital calories! The only downside is that it’s quite a thin and fragile bar, so easily gets broken inside the wrapper. Oh and they are a bit small, but maybe I'm just greedy!" 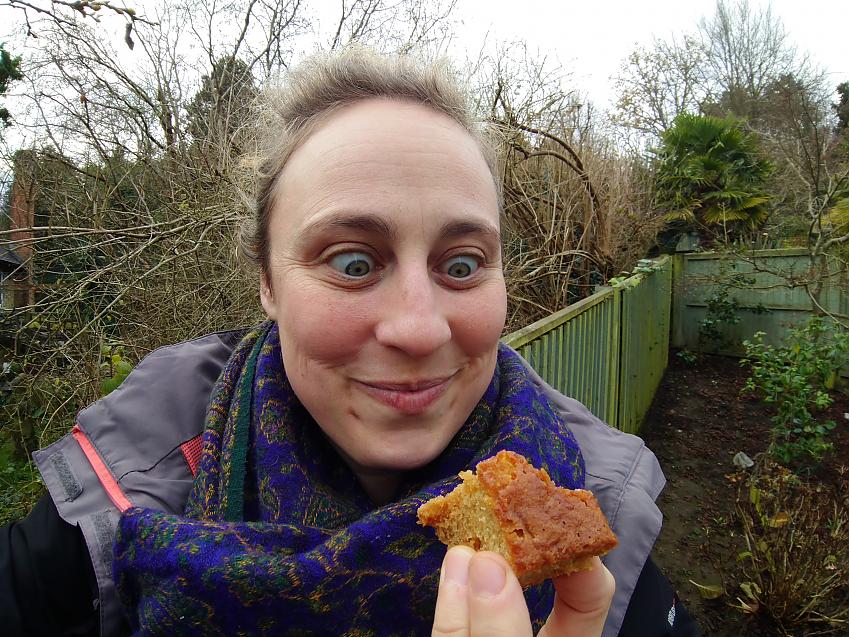 "While the other bars are designed to be eaten on the go, it would be a bit criminal to tuck into homemade cake while mashing the miles - not to mention tricky too, due to domestic wrapping skills. This is definitely food for the cyclist who is happy to take their time. I used the Bank View Café recipe and then left it for five days to ensure maximum sticky softness. It’s an oaty gingery treat, that crumbles round the edges but maintains a solid core. Unlike some of the other bars, there was no need for body warmth to make it easily munchable."

"I may have added too much ginger powder in the recipe, so found it very much like Jamaican ginger cake, meaning I missed the cuppa to wash it down with. Amateur baking skills aside, I was very pleasantly surprised by my first real parkin – or at least as real as a Surrey-baked parkin can be!”

“Wikipedia says ‘parkin is virtually unknown in the south of England’ and it was certainly a new one on me, but I love ginger, so it was always going to go down well on a damp and chilly day out. As another tester said, it’s a bit like Jamaican ginger cake. When first baked it’s a bit dry, but when you leave it to mature for a few days, it gets nice and moist and sticky."

"This was an easy cake to make and keeps for days so you can make it at the start of the week and it’ll still be perfect for your weekend ride. It’s a light fluffy cake which holds its shape so won’t fall apart in your saddle bag. The ginger is both fresh and warming on a cold wintry ride. The only negative is that you really need a hot cup of tea to go with it."

The team's favourite was the Clif bar, although it was a pretty close-run thing. We'd actually be happy munching any of these when stopping for a rest, miles from the nearest café, and the consensus was that energy bars have come a long way since the palate-gumming brown blocks some of us remember from the early days. The parkin got bonus points for authenticity and it could well become a regular among some southerners who weren't familiar with it before. Just remember your thermos!

10 cycling superfoods to give you energy for your ride View

Energy on the Move View

Support your favourite coffee stop by nominating it as Cyclist Café of the Year View
Cycling UK continues to support the UK to cycle
This remains true during this difficult period with the ongoing threat of coronavirus Covid-19
Read our latest advice on cycling
Join Cycling UK to help us change lives and communities through cycling
Membership gives you peace of mind insurance, discounts in cycle shops, rides & routes
Join now