The weather was varied along the route, particularly at higher altitudes
By Sam Jones
Wednesday, 17 June 2020

Bikepacking through the wine country of Italy's Chianti Hills helped Sam Jones cope with the sudden death of his father.

"Should I go?” I asked myself while packing up my bike and gear ahead of a flight to Italy only eight hours away. I had no answer. Like an automaton, I packed, occasionally freezing to stare off into the distance, unpacking something, only to put it back again.

Everyone was saying I should, that there was nothing I could do here in England, that everything was taken care of, that I should go off and ride the route I had planned for months, that it would be good for me, that it’s what he would have wanted. All of which may have been true, but my father had passed away less than 36 hours earlier. Going away didn’t feel right. I was in a state of shock. Uncomfortably numb.

Years back, one early March, my Tuscan girlfriend Daria and I walked Il Sentiero del Chianti (‘the Chianti Way’), a long-distance trail between Florence and Siena, to celebrate her 30th birthday. For four days we walked straight through the heart of Chianti before spring had sprung. Famous for its wine worldwide, vineyards crowd hilly slopes that top the heights of English mountains. Trails weave through woodlands where cinghiale (wild boar) roam, making their presence known only by the mud baths you see along the way.

In March, the colours are muted. Tiny purples, blues and yellows of wildflowers peep through the undergrowth. Trees are bare, the vines dormant, tourists absent. It was a magical walk. Every year when we return for D’s birthday, I promise to return to the trail with my bike.

For a long-time I’ve wanted to learn the contours of this land that is so much more than a wine-producing region. I’ve wanted to camp on the high hills, ride the famous strade bianche (‘white roads'), explore deeper into the woods, and of course feast on the best of Tuscan cuisine! This year was to be the year.

Now I wasn’t sure I wanted to go. Daria convinced me otherwise. 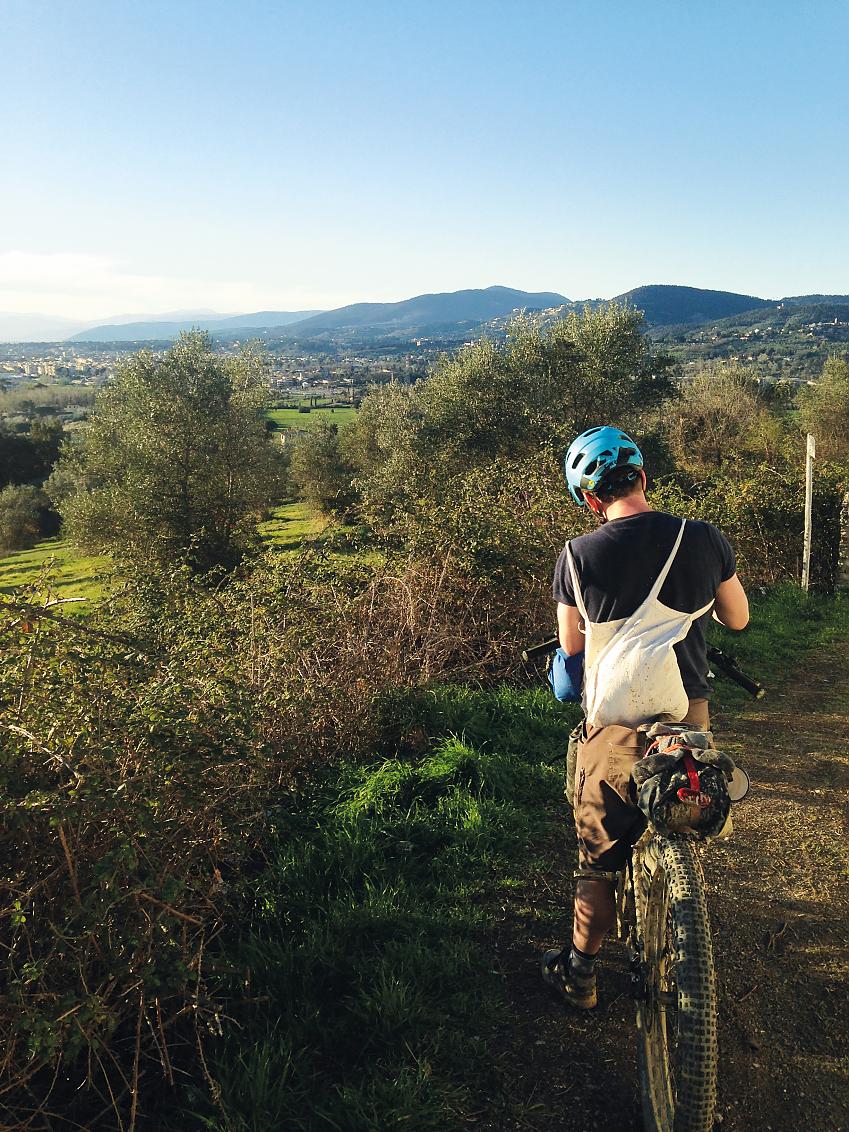 Sam checks the map on the hills above Florence, near the end of the Chianti Way

On the strade bianchi

My old pal Ned was already waiting in Florence, having agreed to join me months before. We caught an early train to Siena, a city some say rivals Florence in beauty. My Garmin immediately got us lost, taking us up and down the steep cobbled streets and passageways until we came to the main square, la Piazza del Campo. Our fat tyres and laden bikes drew inquisitive stares as we rode through this UNESCO heritage site. I’d assumed it was because a bikepacking rig draws attention, but it soon became clear: the Strade Bianche Sportif was on. We did not look the part. Also, our intended route clashed with the sportif.

Plotting a circuitous route out of Siena, I thought we’d broken the deadlock until a ride marshal waved us to a halt. We waited patiently until there was a break in the riders and he beckoned us on, saying “Vai, vai piano” (“Go, go slowly”). Slogging up the side of the closed-road event on foot was unpleasant for both us and thesportif riders. Our escape from the skinny-wheeled hordes onto a different strade bianche was a relief. We began to encounter ramshackle farms, unripe vines lining the hills, loosely held-together paths, and long, steep climbs. We were in true Chianti.

Our bikes drew inquisitive stares…the Strade Bianche Sportif was on. We did not look the part 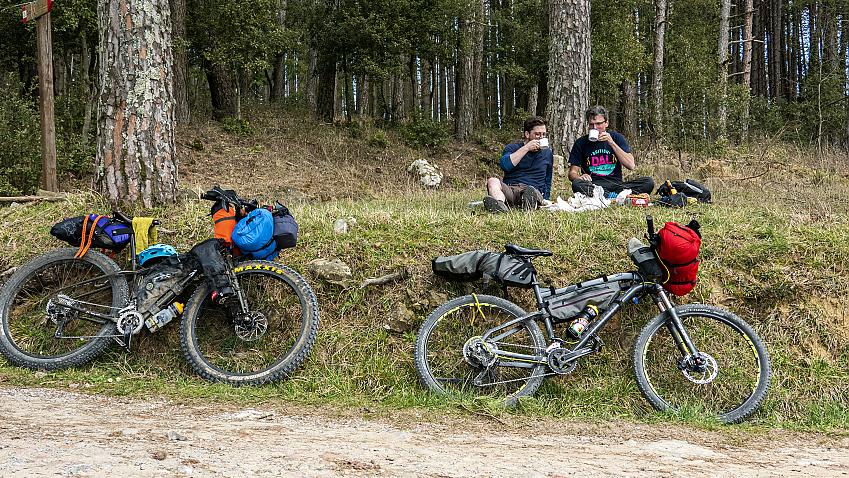 Keeping refreshments on topic, Sam and Ned enjoy a well earned chianti after a long day of riding

A regular rider in the Surrey Hills, I thought I was accustomed to climbing. A laden bike, 1,000 metres or so of climbing off-road over 30 miles – a doddle, right? Ah, hubris, how it loves to trip us all! Riding in Tuscany is tough, especially with occasional hike-a-bike sections. There’s not much singletrack but fire-roads and trails make up for the lack. It was just the right side of hard, and enjoyable enough to shake the blues out of me for a while. It’s difficult to be down when whooping along trails with a lifelong friend.

Golden light was shining on the vines as we emerged from the woods above Gaiole-in-Chianti. A wine shop was open, so we had to visit to sample the wares. The saleslady’s patter was good and we left with a €30 bottle of wine – too English, despite our grasp of Italian, to exchange it when we realised we’d chosen the dearest wine on offer!

We paused long enough in Gaiole for an aperitivo and a supper of ribollita (Tuscan bread stew), steak, and tiramisu, before groaning our way into the hills above to make camp in the unknown dark.

As Ned snored in the dull dawn light the next day, I busied about our barren campsite preparing tea. It was a time to be left alone with my thoughts, and inevitably they turned to my father. The exhilaration and exhaustion of the previous day meant I’d not had much of a chance to think about him. I wondered what my life would be like without Pa, knowing his favoured armchair by the fire would sit empty and I’d never hear one of his familiar tales again.

“Is there breakfast?” As would happen so often throughout the ride, Ned managed to shake me from the rising tide of melancholia.“No, just tea.” “I’d prefer coffee.” It was hard not to laugh. 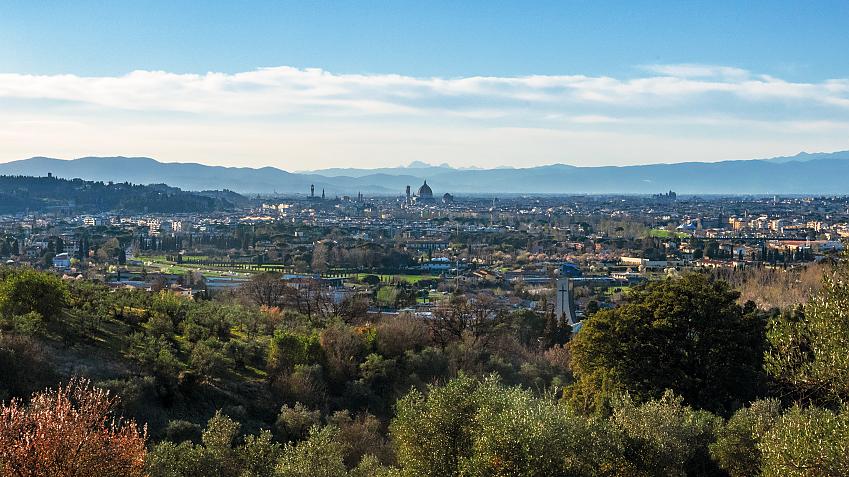 Breakfast was a sketchy descent, followed by a lung-busting gravel climb. An edible breakfast was still four miles away, and I cursed the Sam who’d planned an hour’s worth of climbing first thing.

We stocked up on breakfast and lunch in Radda-in-Chianti, then followed the SP72, a quiet road through rows of vines and olive groves that climbs towards a small village at Badia a Montemuro. Up to this point, we’d largely climbed on tarmac, but taking a track to Monte San Michele (892m) saw us
up through the conifers to a summit sadly marked by a TV aerial.

After a brief lunch and snooze in the rare sun, we started descending to Greve-in-Chianti. Forest tracks merged into swooping switchbacks along the strade bianche, and we had to take care not to overcook the corners and fly off into the vineyards! 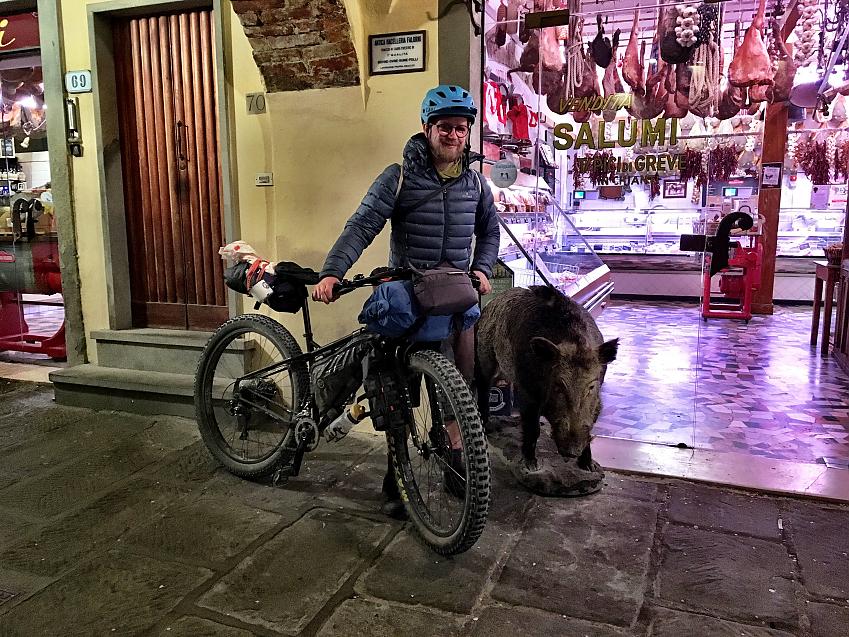 Sam with his fully loaded Surly

Three kilometres and 600 metres lower, we rolled into Greve, tired, elated and just in time for some rain. We whiled away the hours in Greve’s butchery with a glass of Chianti and a card game of scopa.

The rain stopped. The evening, however, was chilly. Ned and I began the ride back into the hills looking for a place to stay. Cycling up cypresslined avenues in the dark, ever climbing, we encountered a gate across our intended path. Cursing the owner, we debated long and hard about jumping the gate, but visions of carabineri (Italian police) directed us to seek shelter and camp high on the hills along a goat track.

“I hope it doesn’t rain,” muttered Ned. It didn’t. At our altitude, it snowed.

In the middle of the night, the clouds cleared, the mercury dropped, and our bivi bags began crusting over. Looking up to the sky, the stars glistened like the drops of ice covering our shelters. Our lightweight sleeping bags weren’t warm enough... 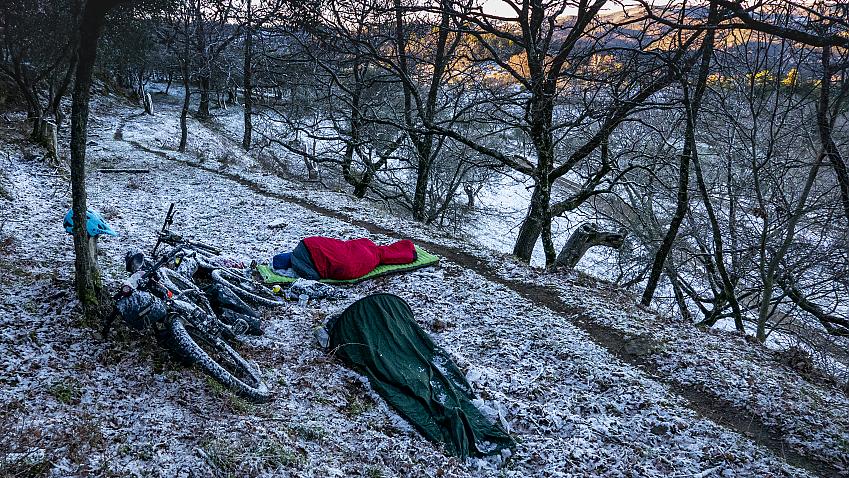 At altitude, it didn't rain, it snowed. Photo Sam Jones

Out of the woods

Next morning we packed up in sullen silence. The only sound was that of a barking Pastore Maremmano – a fierce Tuscan sheepdog that routinely slays wolves and chases off bears. The barking drew the owner’s attention to us. He took pity on our frozen forms and beckoned us in for breakfast in his farm. His huge guard dog was now merely suspicious.

Leaving the farm, the terrain was unrideable – and not just because of the snow. At times, we both had to manhandle our bikes up near-vertical slopes. Reaching the summit, the trail followed a wooded ridge before helter-skeltering down through a rock garden muddied by melting snow.

Tough up followed tough down followed by tough up. The night’s hardship was soon forgotten as we got stuck into some serious mountain biking in the first real sunshine we’d enjoyed on the trip. I’d planned several summits for our final day on the trail, but as we lunched, lazed, and dried our sleeping bags on the Parco di Fonte Santa, we reappraised our ambitions. We had to get Ned’s hire bike back before 6pm.

We came down off our final hill on a technical descent that would have been murder to ascend. In the distance, we could see the Piazza del Duomo and Giotto’s tower – “The lily of Florence blossoming in stone”, as the poet Henry Wadsworth Longfellow described it. Turning our backs on the silence of the woods, we rode reluctantly into the hustle and bustle of the city.

Writing up this trip five months later, I still don’t think I’ve come to terms with my loss. It was a strange time for a cycling journey, but I’m glad for the bike, my friend, and the adventure that gave me a break from grief and a glimpse of life. 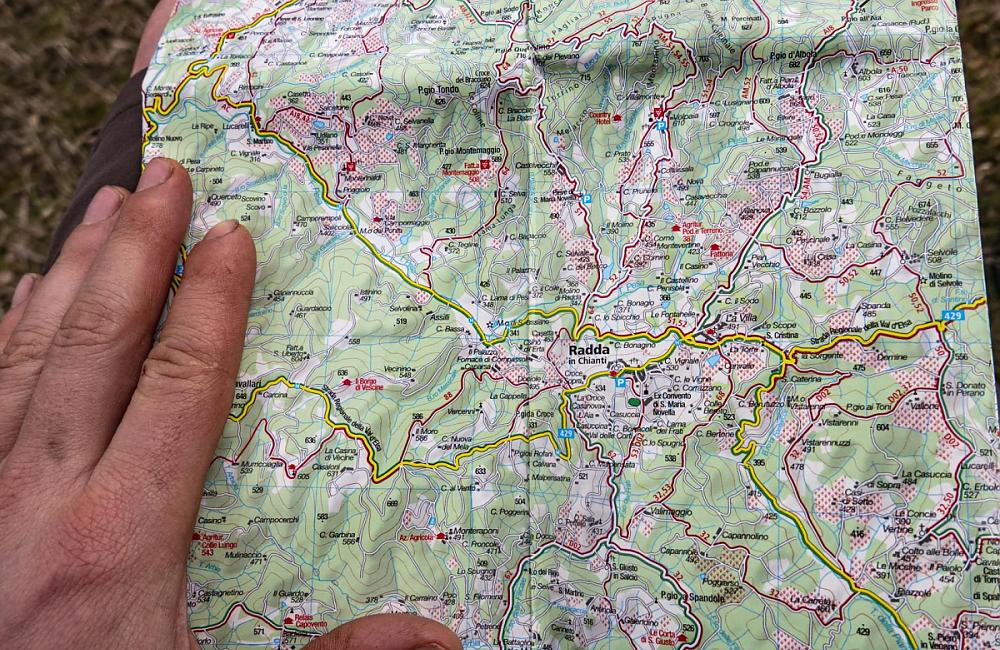 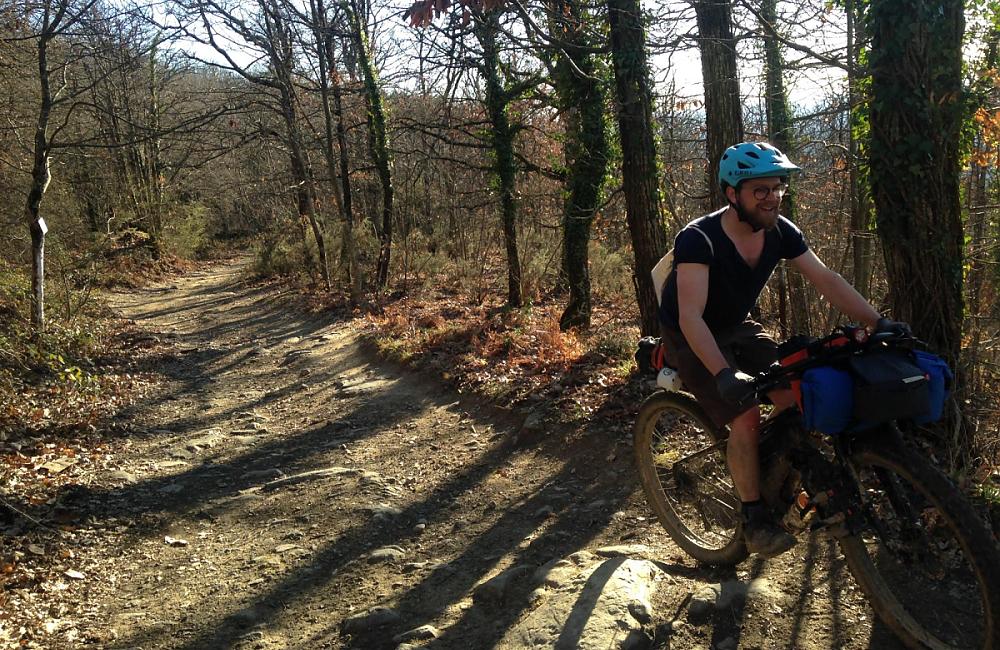 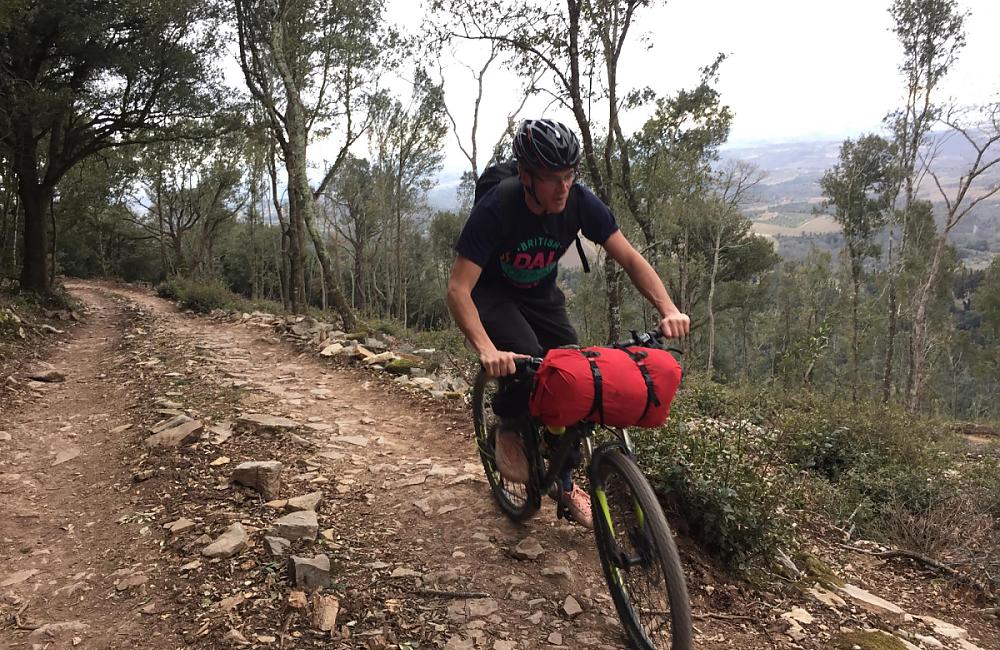 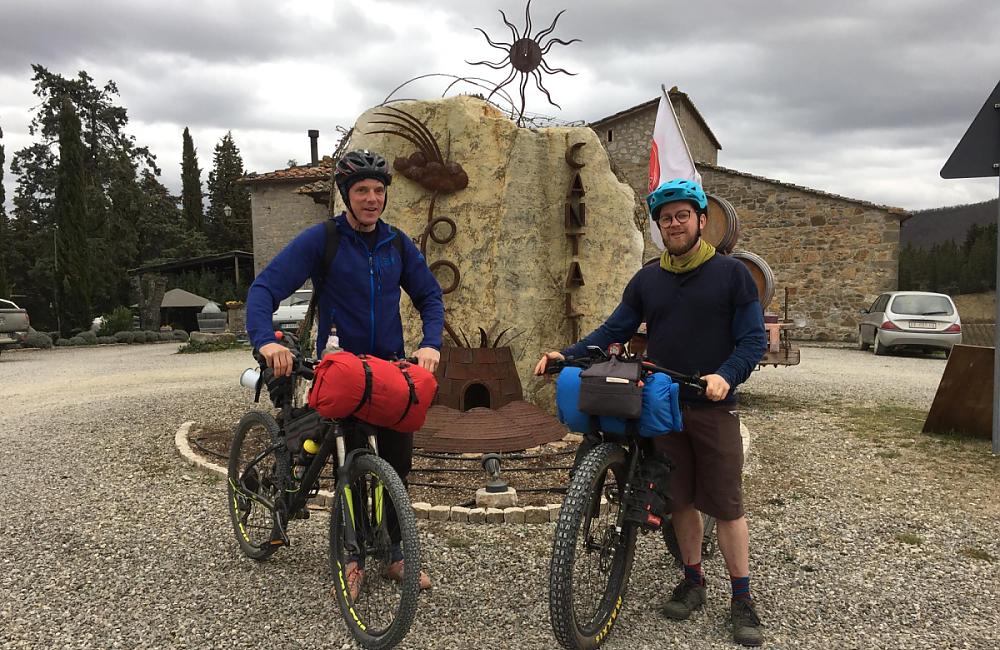 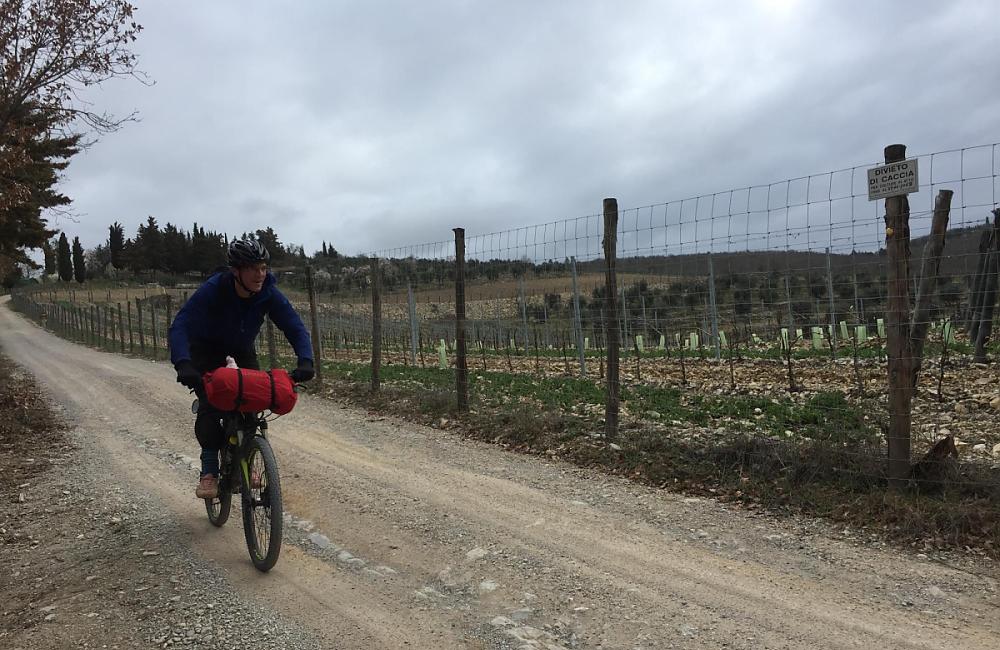 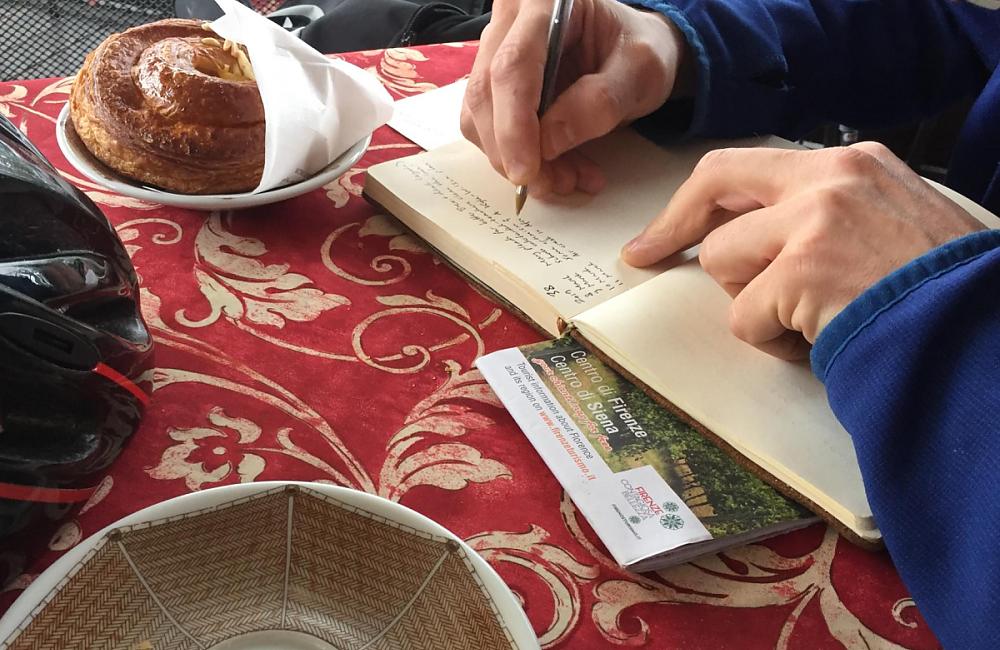 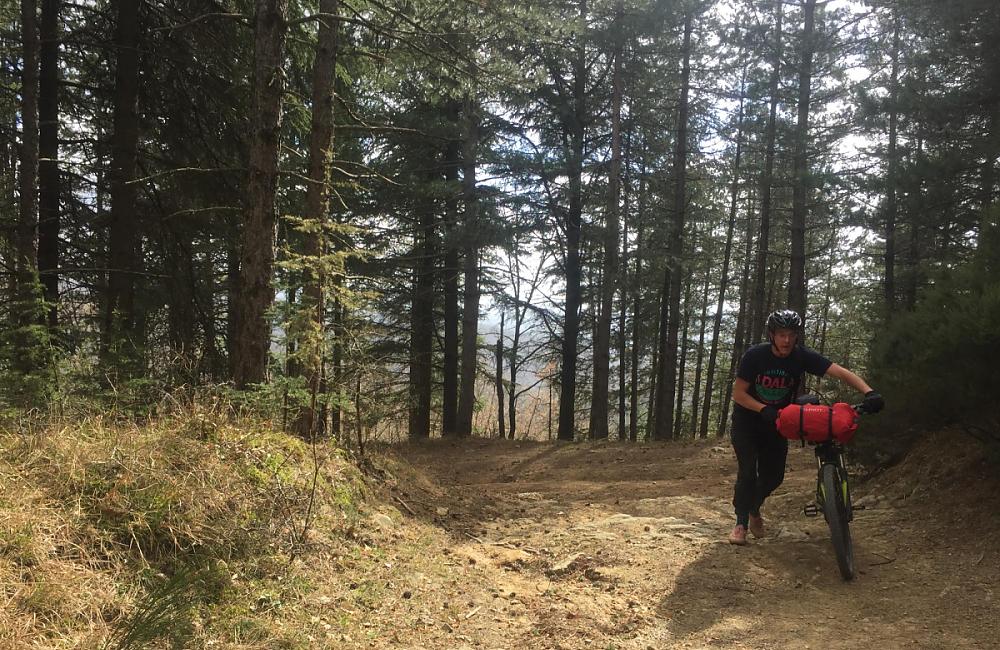 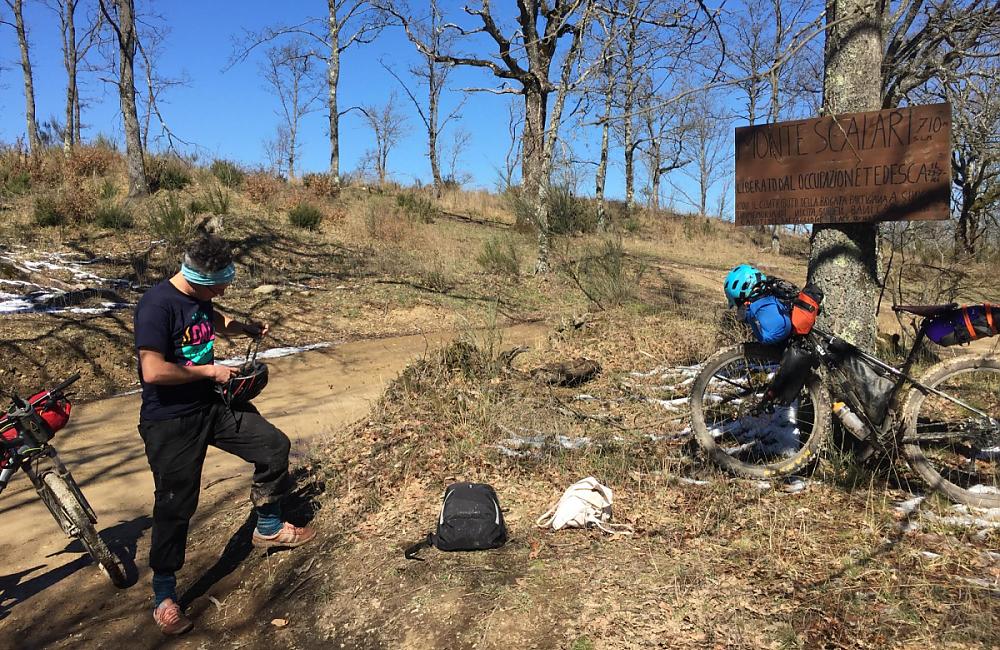 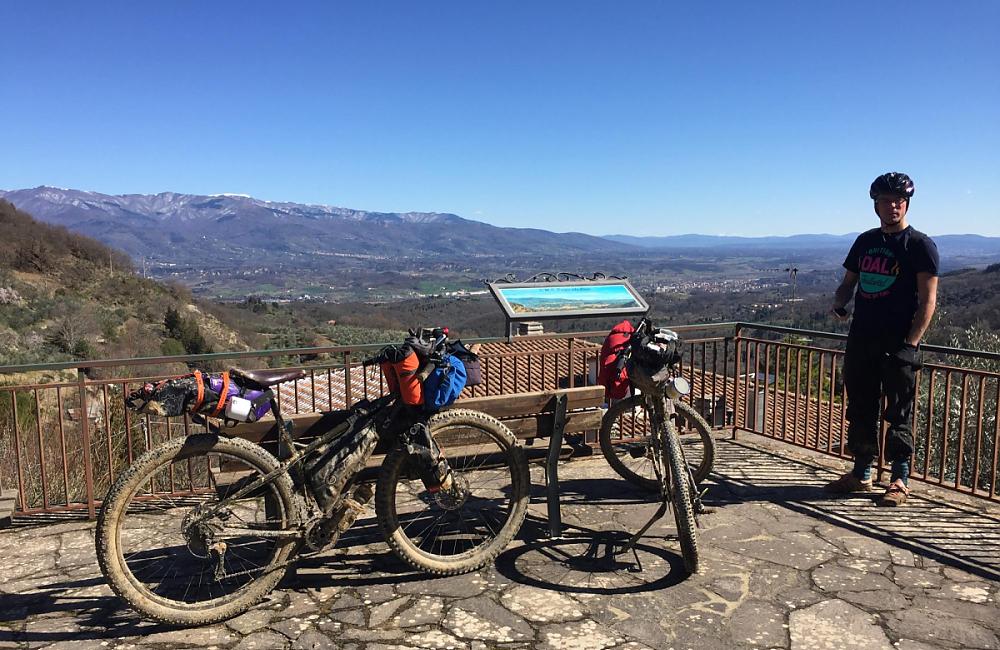 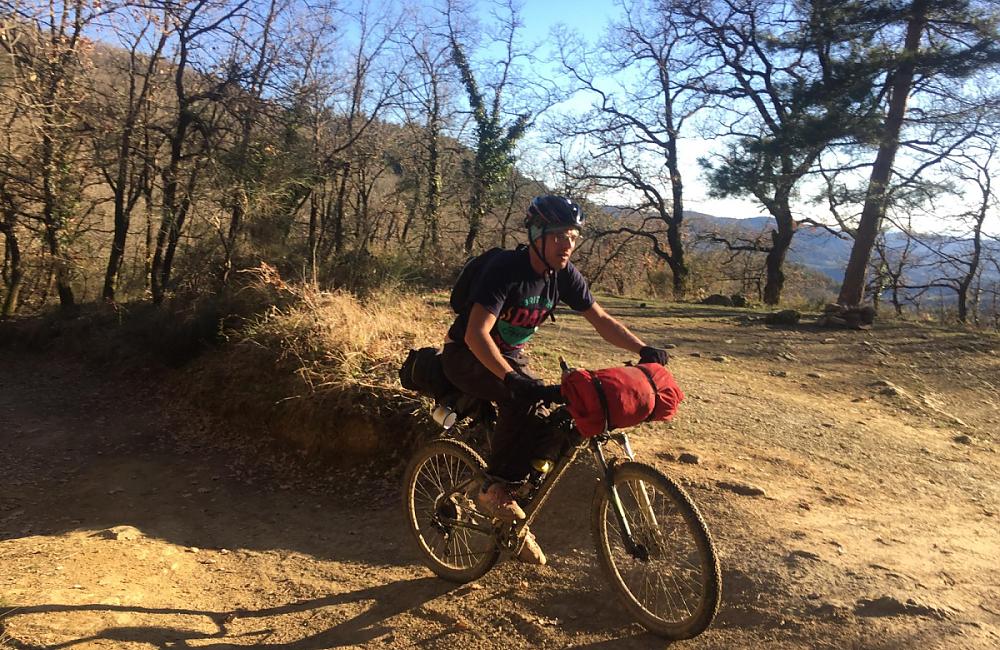 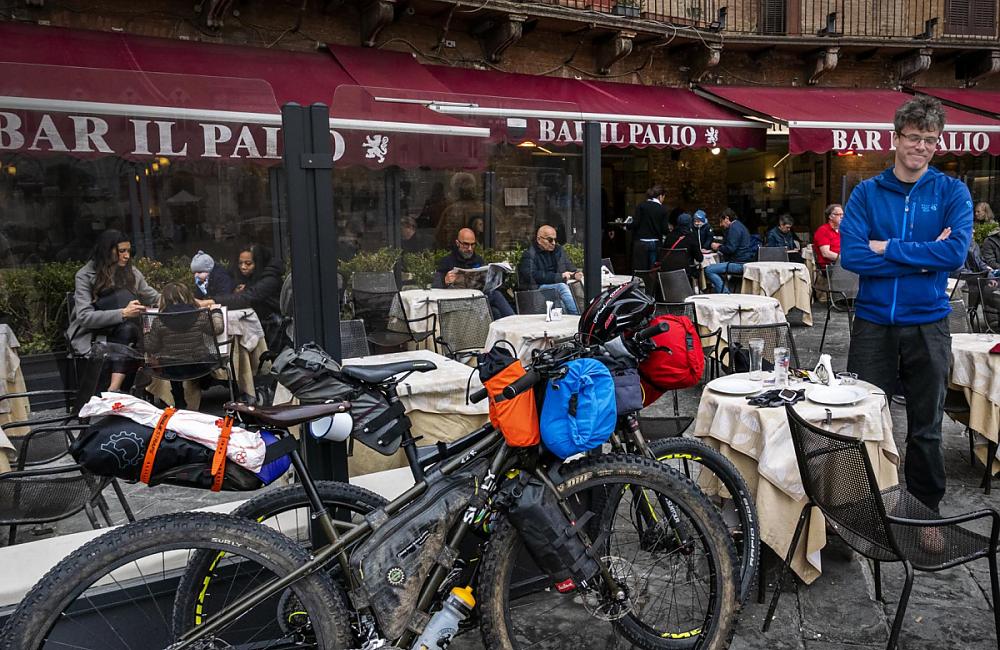 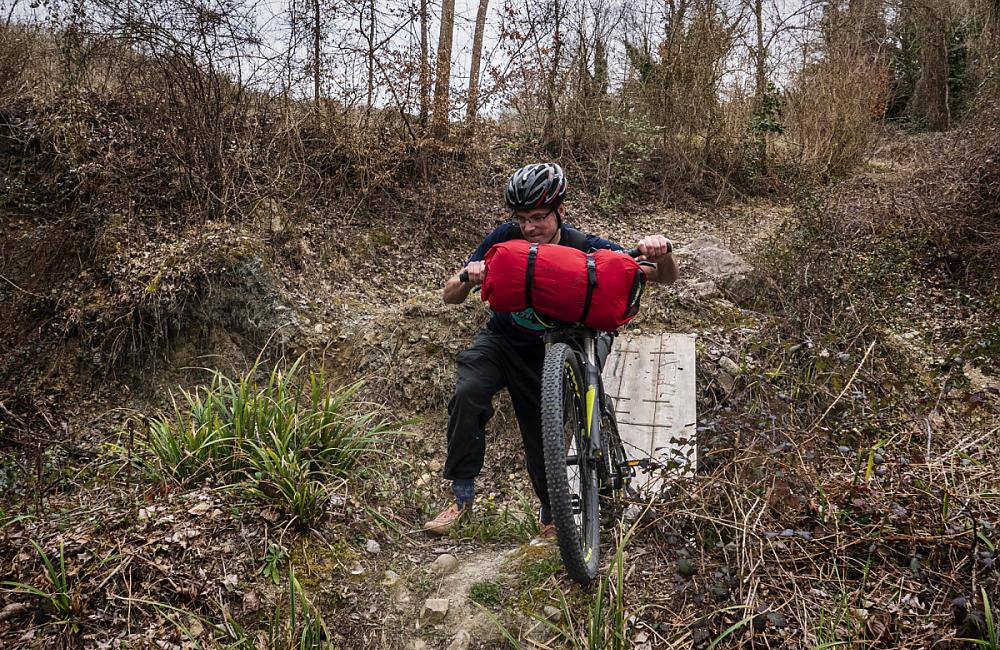 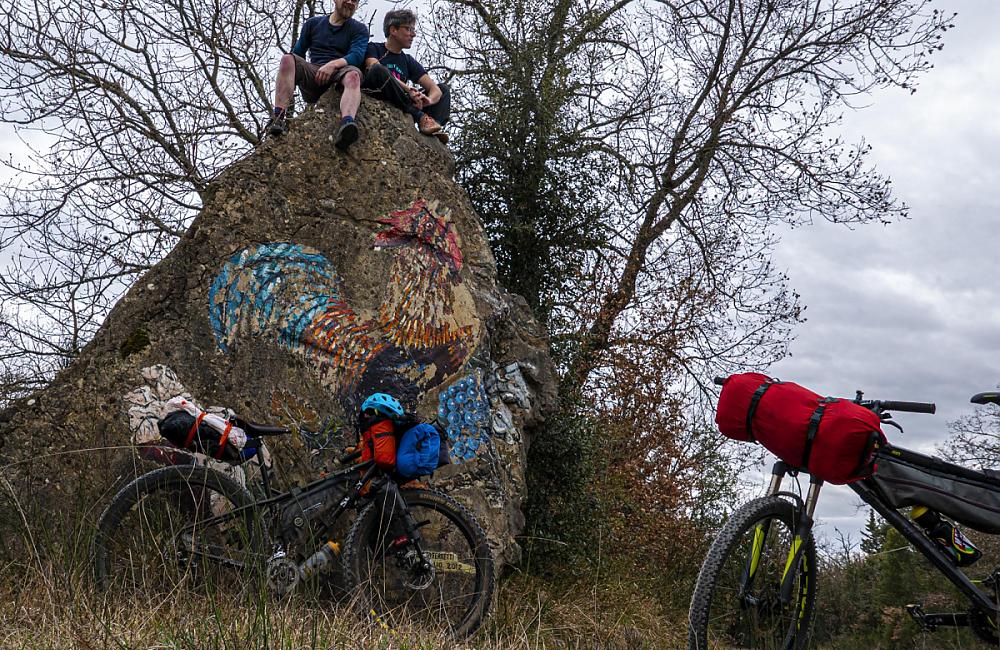 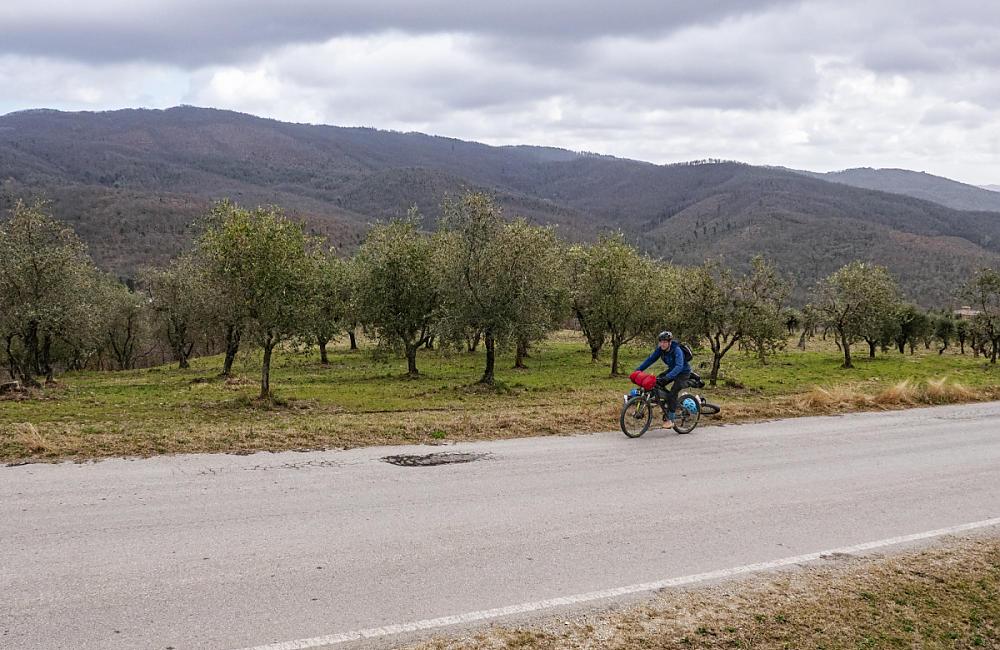 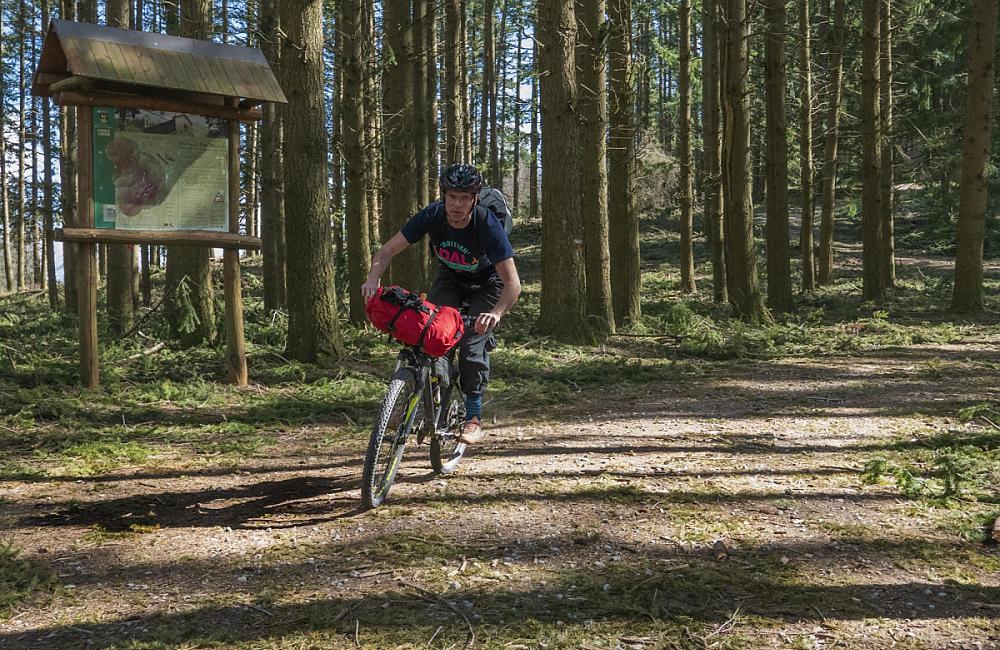 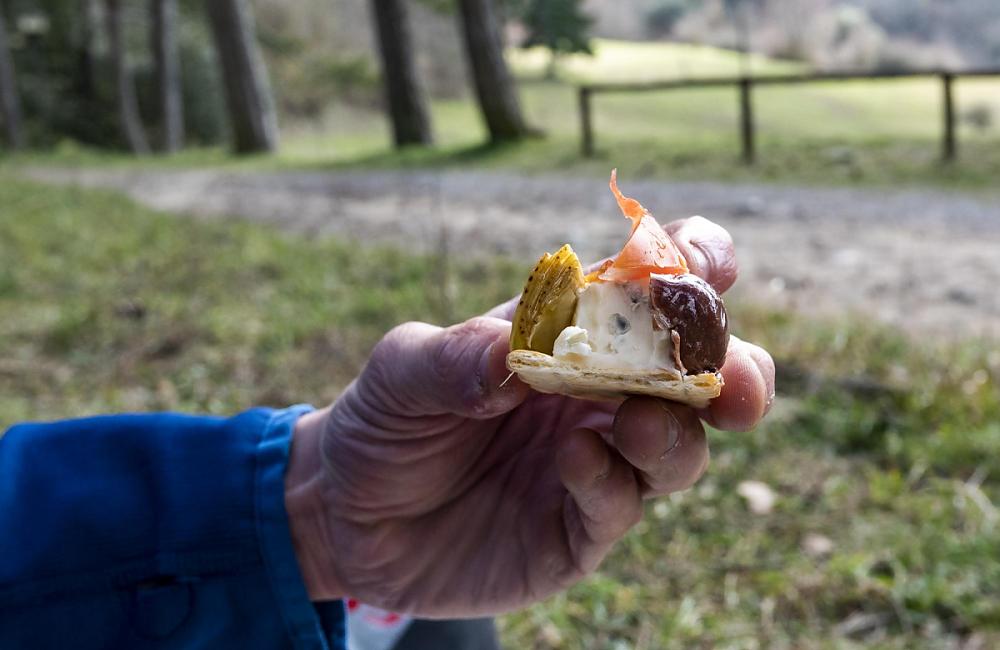 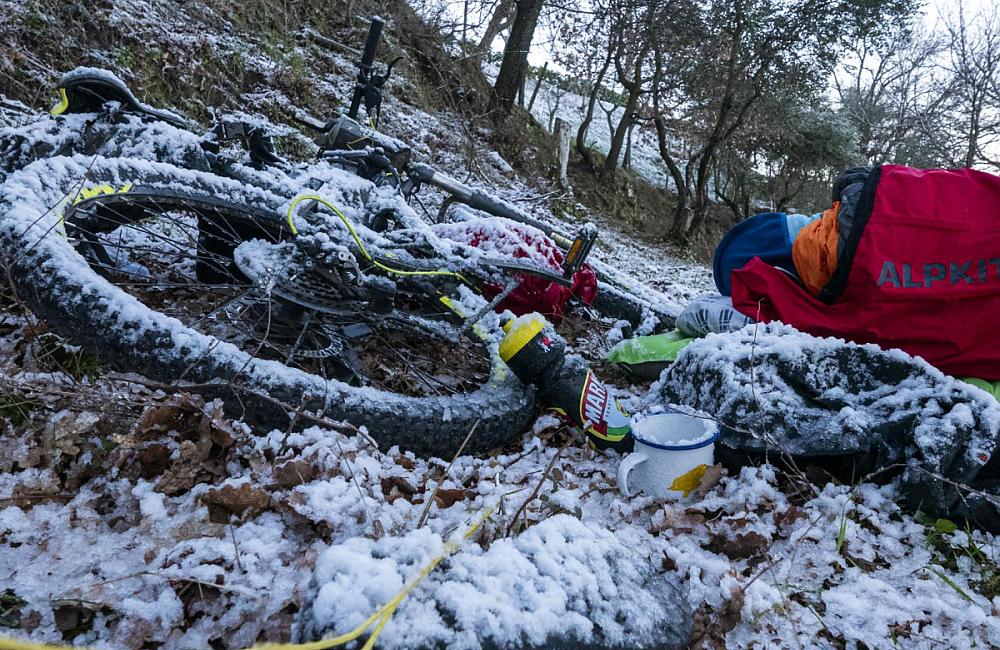 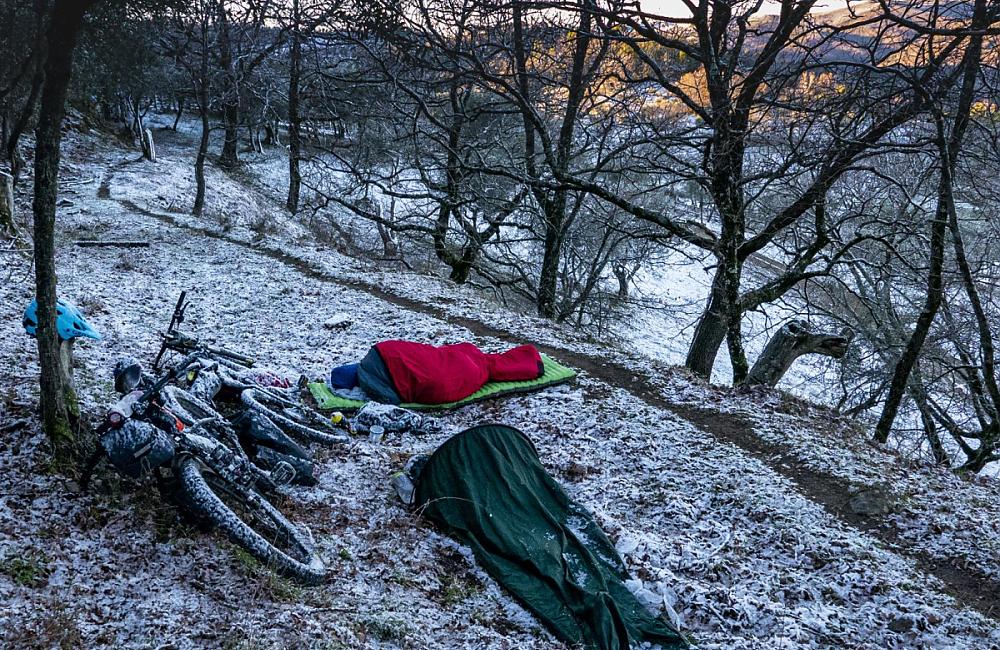 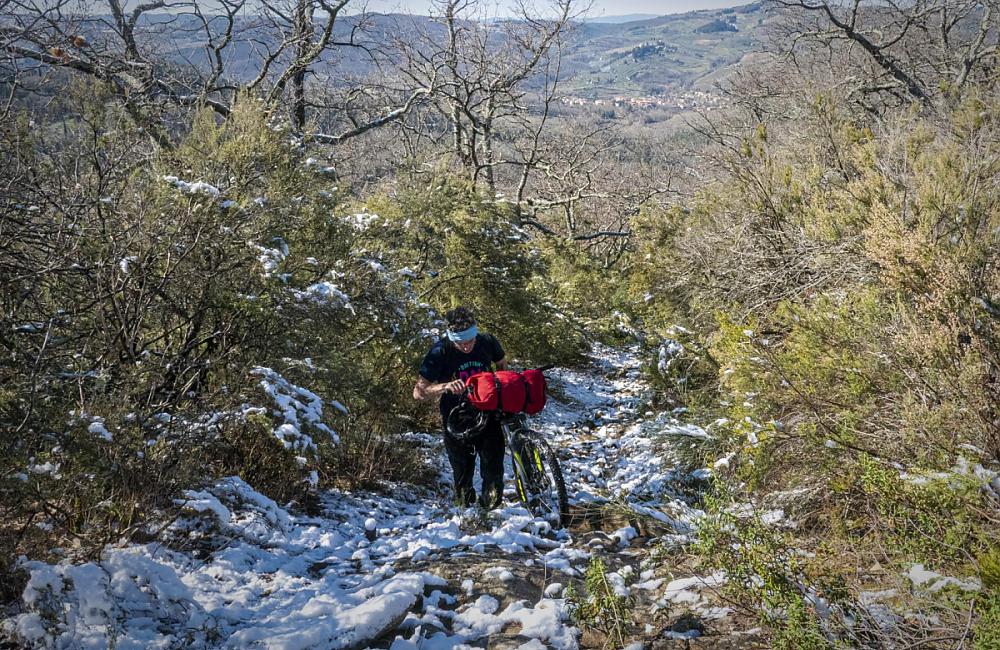 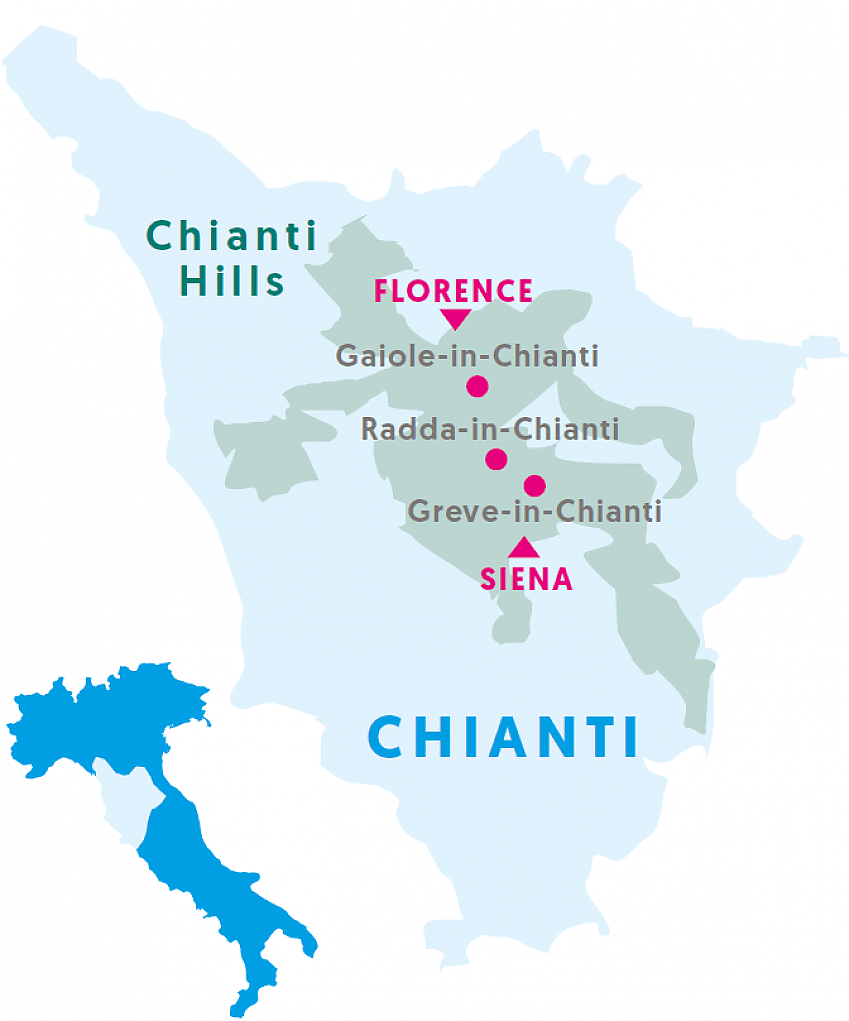 Fly to either Pisa or Florence, then start your route at either Florence or Siena. If you don’t fancy flying with your bike, hire one in Florence via florencebybike.it like Ned did. Alternatively, take the train. For advice, see seat61.com/Italy.

In Italy you pay a €3.50 bike supplement on regional trains. Most villages have a bar, and all towns a little supermarket, so you only need a day’s supplies. Just be sure to bring a corkscrew and leave space for a bottle of Chianti for your evening stops!

Route: We loosely followed Il Sentiero del Chianti from Siena to Florence but chose off-road climbs and descents using ridewithgps.com and a map. We passed through Gaiole-in-Chianti, Radda-in-Chianti, and Greve-in-Chianti.

Conditions: Mixed in March: hot, cold, sunny, overcast, rain, and snow! Trails largely dry until the snowfall when they were mucky as hell.

Accommodation: Bivvying in the woods.

I’m glad I had: an understanding friend and a bivi with a hood!

Next time I would: swap my front tyre for a less aggressive tread, spend more time visiting the vineyards, and hopefully go under happier circumstances.

Why you should try wild camping View