One of the most accomplished cycling illustrators of his time, Frank Patterson documented the golden days of the British countryside
By Sheila Hanlon
Thursday, 17 June 2021

Frank Patterson was one of Britain’s most accomplished and prolific illustrators of cycling scenes. His career spanned over half a century, from the 1890s to 1950s: the golden age of cycling. His pen and ink drawings from high wheelers leaned against pub walls, to cyclists on countryside tours document a lost world and a pivotal part of Cycling UK’s heritage. Historian Sheila Hanlon delves deeper

Patterson was born in 1871 to a seafaring Portsmouth family. Instead of following his father into the navy, he attended The Portsmouth Art School. Upon graduating he set out by foot to seek his fortune in London, a 75 mile walk away. Patterson struggled to find employment or recognition as an artist. He fell on hard times, eventually joining the London and Scottish Regiments of the army from 1890-92.

The young artist eventually discovered that his drawings had commercial value. One of his early successes was illustrating several of his father’s sea stories for Boys Own Paper. His first job was home and furniture illustrations for trade publications such as The Book of the Home and The House. He also picked up occasional work for books and magazines, such as Boer War sketches for The Illustrated London News. 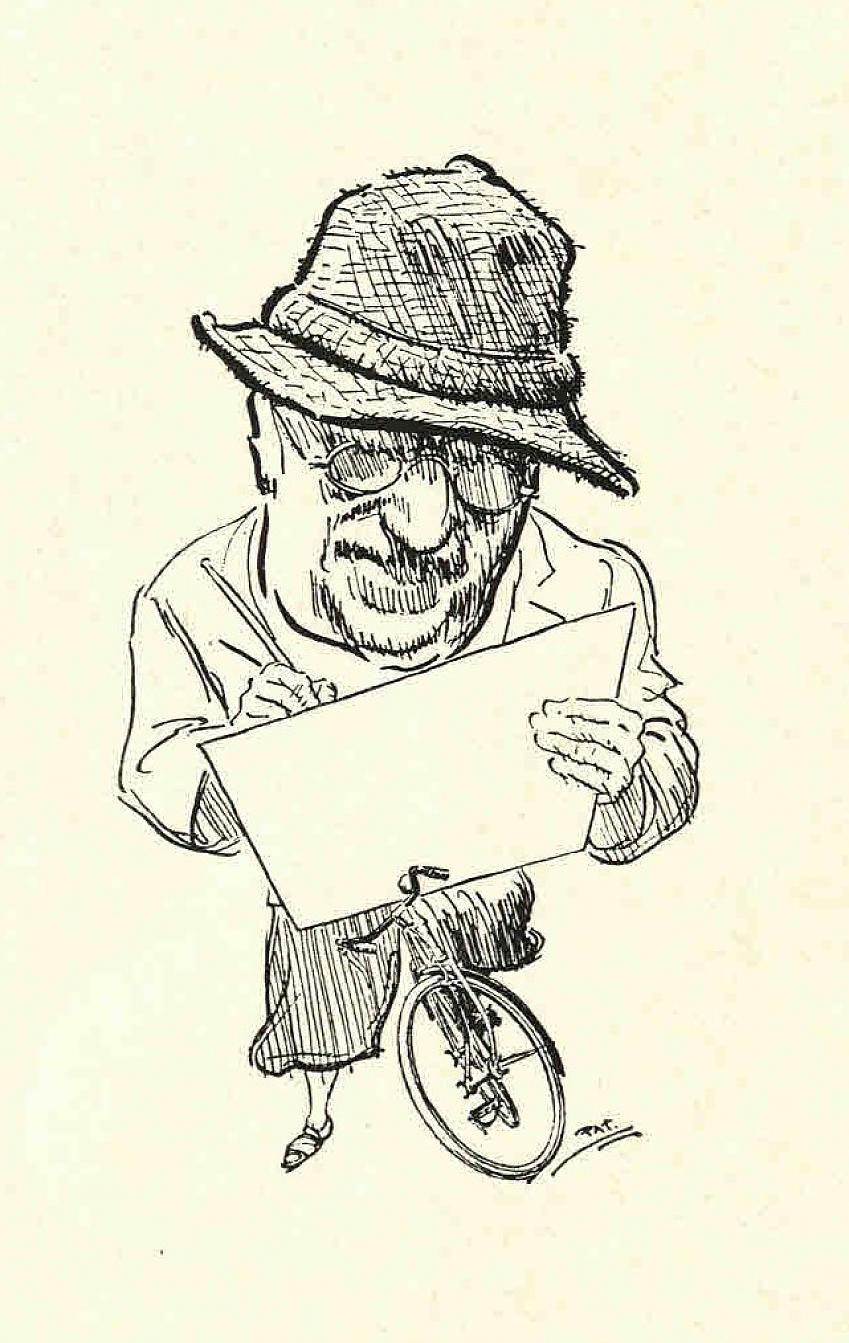 Cycling magazine published one of Patterson’s illustrations in 1893. Temple Press, who owned a number of titles including Cycling, subsequently contracted him for ten illustrations per week. Patterson’s first drawing for The CTC Gazette appeared in 1925. Before long, he was recognised as one of the most pre-eminent cycle illustrators of his day.

Patterson learned to cycle as an art student. One of his friends owned a penny-farthing and rode it home to Poole once a month, The Frank Patterson Appreciation Society Newsletter, June 1991 reported “Once Pat endeavoured to keep him company on an ancient trike, but fell many miles behind, having to seek new energy at a wayside pub.” Patterson’s older brother also had an Ordinary.

The cycle craze of the 1890s was in full swing when Patterson moved to London. He took up cycling and explored the countryside on solo tours. Naturally, Patterson drew scenes from his adventures a-wheel.

A serious knee injury at age 38 ended his cycling days. The accident did not, however, stop Patterson’s romance with cycling and the countryside. He began to draw from photographs and postcards, many of which were sent to him by friends or fans. Paterson interpreted the images in his signature style, adding in cyclists to complete the scenes. He retained his cyclist’s eye, conveying a feeling of riding through his landscapes. 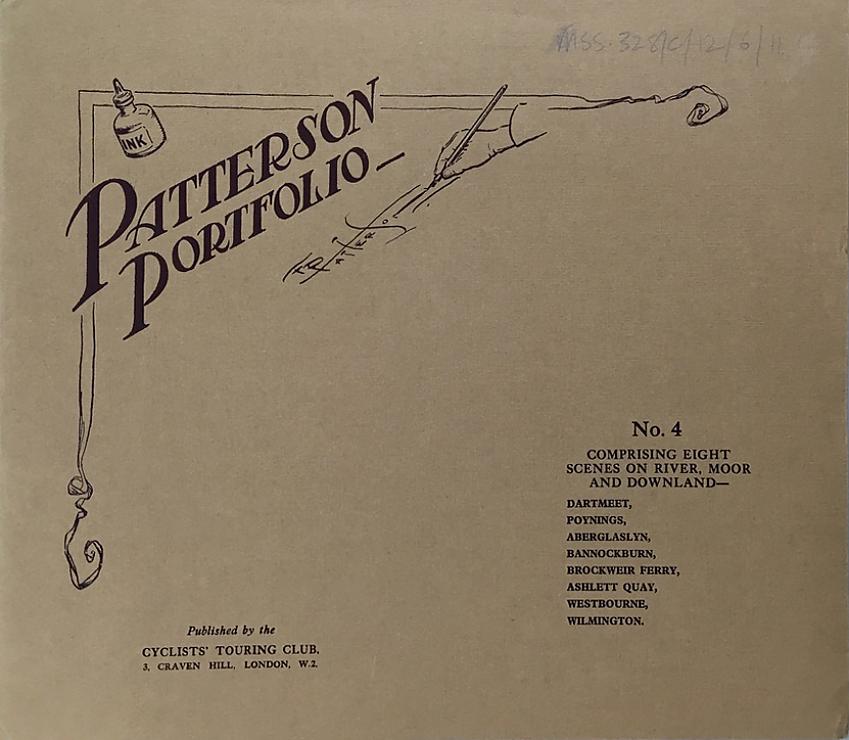 Artist Harry Sheldon wrote to the Frank Patterson Appreciation Society Newsletter, 27 March 1994 that as a young artist he was given several copies of Cycling so that he could study Patterson’s techniques. Sheldon’s cyclists didn’t look like they were sitting on their bikes. “That did the trick,” Sheldon wrote, “I had no problems after that.” Several years later, Sheldon met Patterson at the Midland Hotel, Manchester.  He recalled, “we had a long chat about drawing bicycles.”

During World War II, Patterson was recognised for his role in maintaining morale among soldiers. He received the Bidlake Memorial Prize for “his joyous delineation of the pastime of cycling for 51 years, and the pleasure his work has given, in particular to cyclists serving their country the world over during 1944.”

Temple Press’s studio manager Horace Button praised Patterson’s “Meticulous treatment of the bicycle, with all its difficult ellipses – artistry and mechanical efficiency combined” in his introduction to The Patterson Book, published 1948. CTC Historian William Oakley called Patterson “a grand master of pen-and-ink line drawing…unrivalled in capturing the unique atmosphere of a cycling scene.”

Patterson’s style is instantly recognisable. He used a Gillott 303 with a goose quill to create his pen and ink drawings. Patterson called his technique “slapping in the pork.” Lines of varying width, cross hatching and shading build up landscape, action and atmosphere. The resulting effect mimicked the etched wood line-cut prints commonly used in press illustrations, but gave Patterson more creative freedom.

Patterson covered every county in England plus parts of Scotland, Wales, Ireland and the continent. Scenes range from rolling hills of the Chilterns to jagged Highland mountain peaks to overgrown Kentish lanes. Wide perspectives stretch over vast horizons or follow narrow roads into the distance. More intimate perspectives might detail a stone bridge or village high street.

Humour infuses many of the images. A night scene entitled “That Eerie Sensation of Being Followed” shows trees coming to life on a spooky county lane. A whimsical winter sketch depicts a dandy rider on a draisienne overflowing with luggage and a Christmas goose. 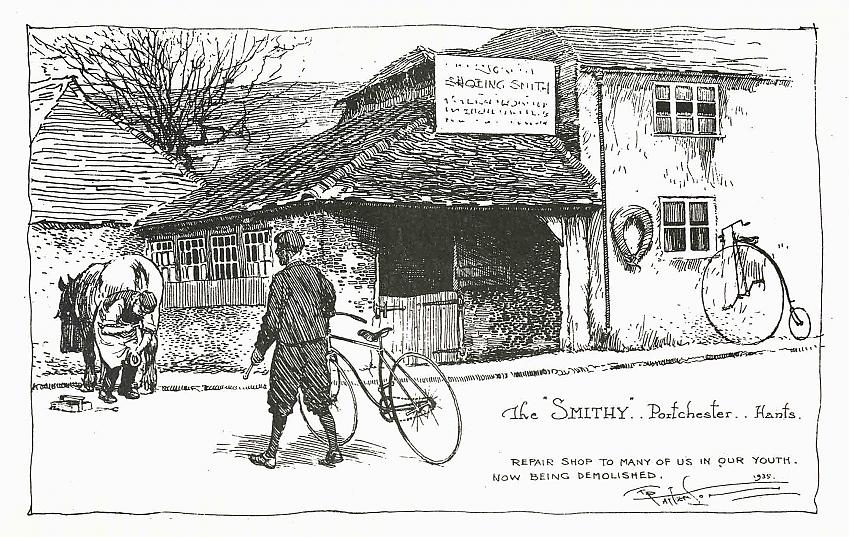 The Smithy Repair Shop at Portchester

Pubs, cyclists’ rests and historic buildings featured in many of his drawings. The famous Angel Inn at Thames Ditton is captured in its Victorian heyday surrounded by stylish cyclists. CTC winged wheel signs are visible on many of his inns. Other nostalgic subjects include the Old Post Office at Cropthorne-on-Avon, The Smithy Repair Shop at Portchester and countless village churches.

Patterson found inspiration in literature about the British countryside. Anglo-French writer and poet Hilaire Belloc, who also lived in Sussex, is frequently quoted on Patterson drawings. Alexander Pope is referenced in a sketch of a pipe-smoking cyclist reclining by a tree while a scorcher speeds, captioned “Some place the bliss in action, some in ease, Those call it pleasure, and contentment these.” Patterson is often said to have embodied the spirit of travel writer William Cobbett’s 1830 book Rural Rides.

Not everyone admired Patterson’s style. His critics called his work syrupy, unrealistic and commercial. The Frank Patterson Appreciation Society Newsletter, September 1988 asked, “Why is it that ‘Pat’ so often got the name of the places he drew wrong? Was it because he interpreted someone’s handwriting wrong, or was it because he just couldn’t spell.” For his audience of cycling enthusiasts, however, none of these critiques mattered. For them, Patterson captured the magic of the open road.

In 1898, Patterson and his second wife Emily leased an Elizabethan farmhouse near Billingshurst, West Sussex. The rent was only 9d, but the house was completely dilapidated. With the help of a local builder it soon became a comfy home with an open hearth at its heart. The house needed a name, so they called it Pear Tree Farm. In 1902 the couple purchased the property for £5. They raised their children Peggy, Molly, Andre and George on the farm and made it their lifelong home. 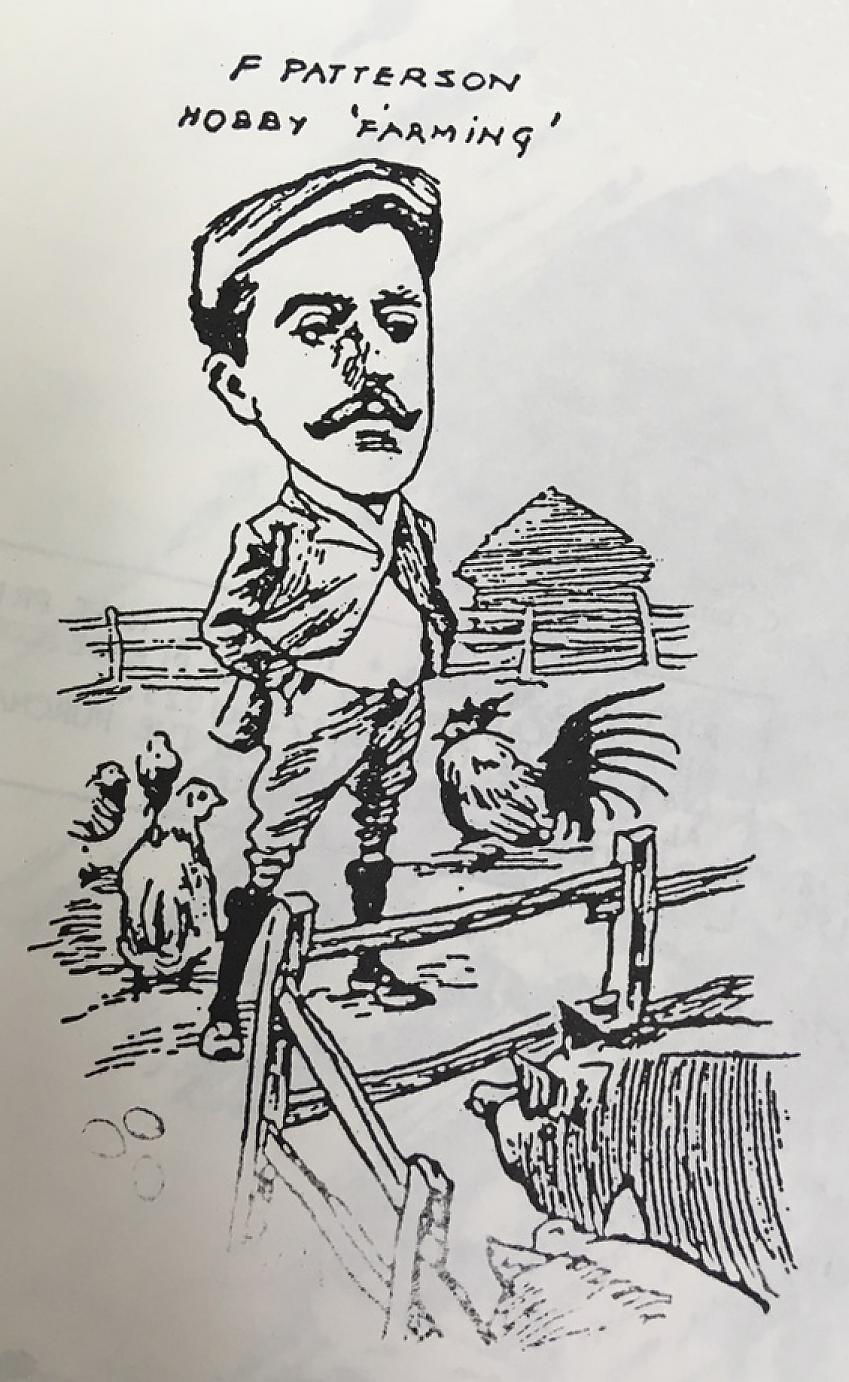 Patterson sketched himself as a farmer

Patterson was a recluse, especially in his later years. Pear Tree Farm became his full time studio. He rarely went into town and avoided London at all cost. He dressed the part of a local farmer in tweeds, boots, gaiters and a hat. His dogs were often by his side and a gun in his hand. He sketched himself as a farmer and photos show him in this persona. Paterson remained a mystery to his neighbours who would have been surprised to discover an artist living among them.

CTC President and Cycling editor George Herbert Stancer was a regular guest at Pear Tree Farm. After a 1940 stay, he wrote in Cycling that Patterson was the magazine’s “greatest contributor.”

Paterson died in 1952 at the age of 81. He continued to draw until his final years. During his career he created over 26,000 images and illustrated hundreds of books. He claimed never to have missed a deadline. His ashes were spread at his beloved Pear Tree Farm.

On 14 September 1974, a plaque honouring Patterson was erected at CTC/Cycling UK Headquarters. It reads: “Dedicated to the memory of Frank Patterson (1871-1952) of Pear Tree Farm, Billingshurst, who for over fifty years depicted the spirit of cycling in a manner unequalled by any other artist.” 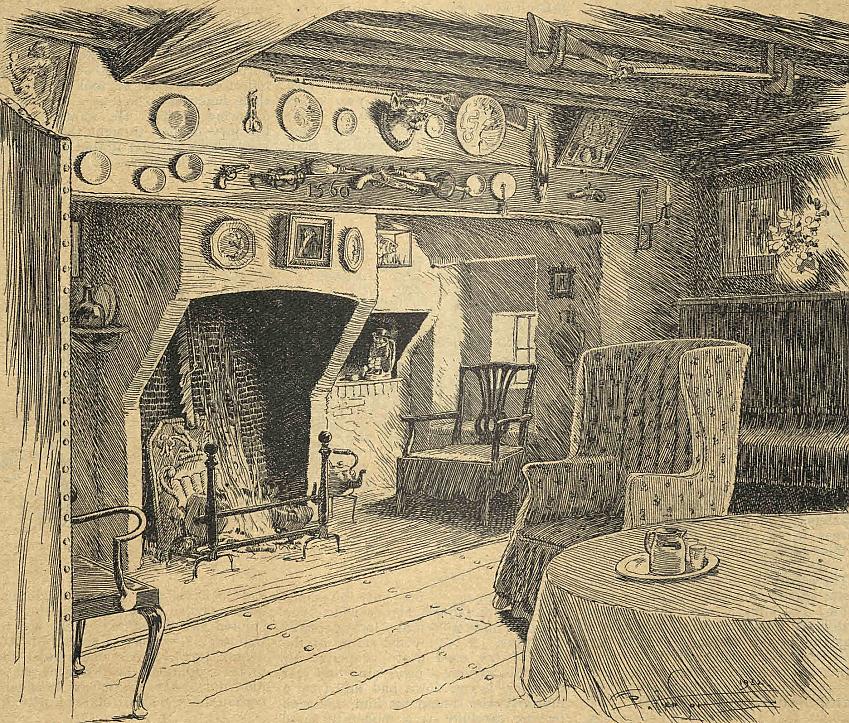 There have been several exhibitions of Patterson’s work including one held near Billinghurst in collaboration with Sotheby’s to mark the 120th anniversary of his death in 1991. It included 115 original drawings, a wood cut of a draisienne and a selection of his pens.

Patterson’s work has been reproduced in a number of books and catalogues. The Art of Frank Patterson, published by the CTC in 1979, contains over 150 examples of his work. The club also produced folders of Patterson prints for purchase. The National Cycle Archive at the Modern Records Centre, University of Warwick holds over 500 Patterson illustrations, plus papers related to his life and legacy.

Frank Patterson was not only one of the most accomplished cycle illustrators of his time, but a talented artist who documented the golden days of the British countryside.

The history of the Cape Wrath Fellowship View