A history of Cycling UK's birthdays, jubilees and centennial

A history of Cycling UK's birthdays, jubilees and centennial

On 5 August Cycling UK turns 142 years old. This makes Cycling UK (which was known in 1878 as the Bicycle Touring Club, then the Cyclists' Touring Club), the oldest transport organisation in the world. Cycling UK historian Sheila Hanlon looks back over how the organisation has celebrated anniversaries, jubilees and centennials

The idea of a cycle touring club gained popularity in 1877 when Bicycle News published a call for collaborators from Stanley Cotterell to help start such an organisation. A meeting was proposed for 5 August 1878 at Harrogate, Yorkshire. Cotterell rode his penny-farthing 200 miles from West Bromwich to the rally, where about 50 other cyclists joined him. The meeting was a success and the Bicycle Touring Club (BTC) was officially founded.

By its first birthday the BTC boasted 718 members, an informative newsletter and a council led by Cotterell as President. By 1888, it had 20,000 members. The club had changed its name to the Cyclists’ Touring Club (CTC) to represent a wider spectrum of cyclists including lady tricyclists. CTC winged wheel signs were widely recognised as the club’s endorsement on hotels and services, while CTC danger boards warned of hazards ahead.

The CTC reached majority age, 21, in 1899. Thanks to the 1890s safety cycling craze, membership numbers hit 60,000. A CTC Majority Year Fireworks Display took place at The Crystal Palace. A badge embroidered with a winged wheel firework commemorated the event. No CTC birthday would be complete without rides. A.W. Rumney arranged a “Majority Tour” for riders in the Lake District.

A lavish banquet at the Connaught Rooms, Covent Garden launched the 50th birthday festivities. In his keynote address to the sold out crowd of 250 attendees, guest of honour Lord Birkenhead, Conservative peer and sportsman, recalled learning to ride a boneshaker in his youth. He wished the CTC a prosperous future, noting,

“May your members continue to explore the sweet country lanes of England; may they continue to inspire in the girls and boys of our stock the athletic spirit of keenness which will indefinitely reward them by acquainting them with the rural beauties of incomparably the greatest country in the world.”

Toasts to the club were made by Ramsay Macdonald (then an MP), Sir John Foster Fraser (world cyclist) and Sir James Percy (former Pickwick Bicycle Club president). Messages were read from King George V and founding father Cotterell. Musical entertainment filled the remainder of the evening.

CTC Golden Jubilee initiatives were vast and varied. A Golden Jubilee Rally took place in Harrogate in August. The first veterans’ century ride for men aged 50 and over was held. James T Lightwood was commissioned to write a history of the CTC, Romance of the Cyclists’ Touring Club.

Relay across the UK

The most celebrated CTC event of 1928 was the Golden Jubilee Relay. The  two-week relay covered 2,052 miles across the UK. Riders visited every major metropolis south of Aberdeen collecting signatures from local dignitaries to present to the Prince of Wales, CTC life member.

The first team left Mansion House, London at 5:45AM 11 June. The relay followed the Thames inland then continued North to Dundee, West to Glasgow and South to Bolton in week one.  Week two covered Lancashire, the West Midlands, part of Wales, Somerset, Dorset, Sussex, Kent and Essex, finishing off at Marlborough House, London on 23 June.

Women played their part. Miss M G Baggs cycled the hilly 35-mile section from Weston-super-Mare to Bath. In all, 500 signatures were collected and immense press and public attention was generated.

Harrogate was the hub of the CTC’s 60th anniversary. The club’s early pioneers were recognised at a Diamond Jubilee Dinner. Cotterell took the seat of honour. Mrs Jeanie Welford, wife of the club’s original secretary and the club’s first female member, joined him on the head table. The Mayor of Harrogate congratulated the CTC on its longevity, adding “Cycling is a wonderful pursuit, conducive to good health and a long life—provided you keep off the main roads.”

Thousands of cyclists attended the CTC’s Diamond Jubilee Rally in Harrogate that September. District Associations got into the spirit with small rallies aimed at widening participation. Sheffield’s gymkhana attracted 500 riders and included tandem and slow races. The North Metropolitan DA in London held a rally, bicycle polo tournament and novelty pillow fight at Alexandra Palace. The Canterbury and Thanet sections held a 24-hour, 200 mile circular ride through Kent on a rainy October weekend in honour of the jubilee.

As icing on the cake, in 1938 Cotterell was inaugurated into The Golden Book of Cycling for his service to cyclists. 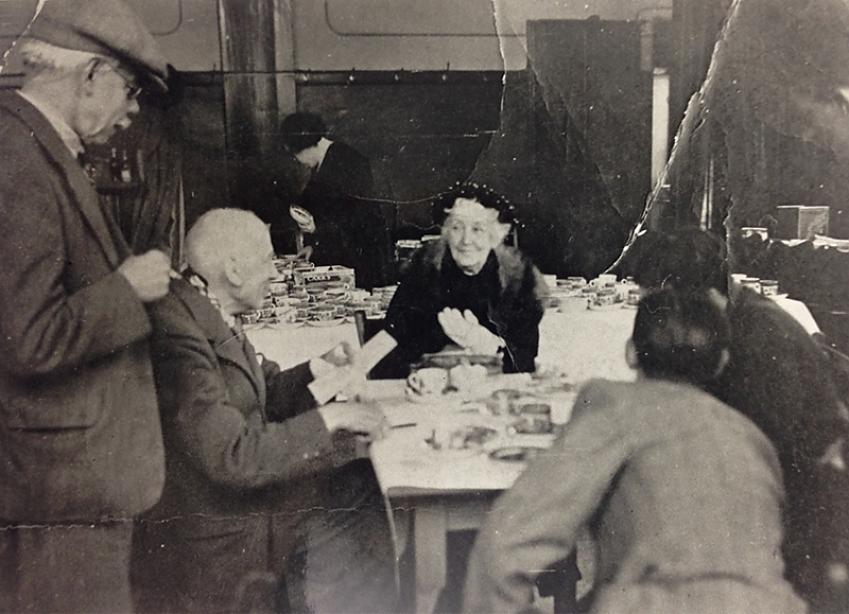 The highlight of 1948 was the York Rally, a joint celebration of the 70th anniversary of the CTC and the 50th year of the Alliance Internationale de Tourisme (AIT).

An estimated 13,000 cyclists from 16 countries were expected at the York Rally, August 13-15. The CTC Gazette promised the “international rally at York will be the greatest event of its kind since the invention of the bicycle.” Accommodation was provided in huts at Tholthorpe or campsites at Knavesmire at a cost of 2s or 1s respectively. The weather, in true British fashion, was not in the campers’ favour. The Yorkshire Post reported that, “Despite heavy storms which have transformed parts of Knavesmire into a quagmire, several hundred cyclists from the British Isles and the Continent were not downhearted when they assembled at York.”

The York Rally was a packed event. Saturday featured cycling competitions, a mass rally, speeches broadcast on the BBC Northern Home Service, bicycle polo and a film screening. A grand dinner was held at the Station Hotel to thank the City of York for hosting.

Sunday began with a welcome address by the Archbishop of York and cyclists’ service in the Minster, followed by a procession through the city to Knavesmire for a cycling demonstration, Renown comedian, sports commentator and racing cyclist Stainless Stephen MC’ed the event. 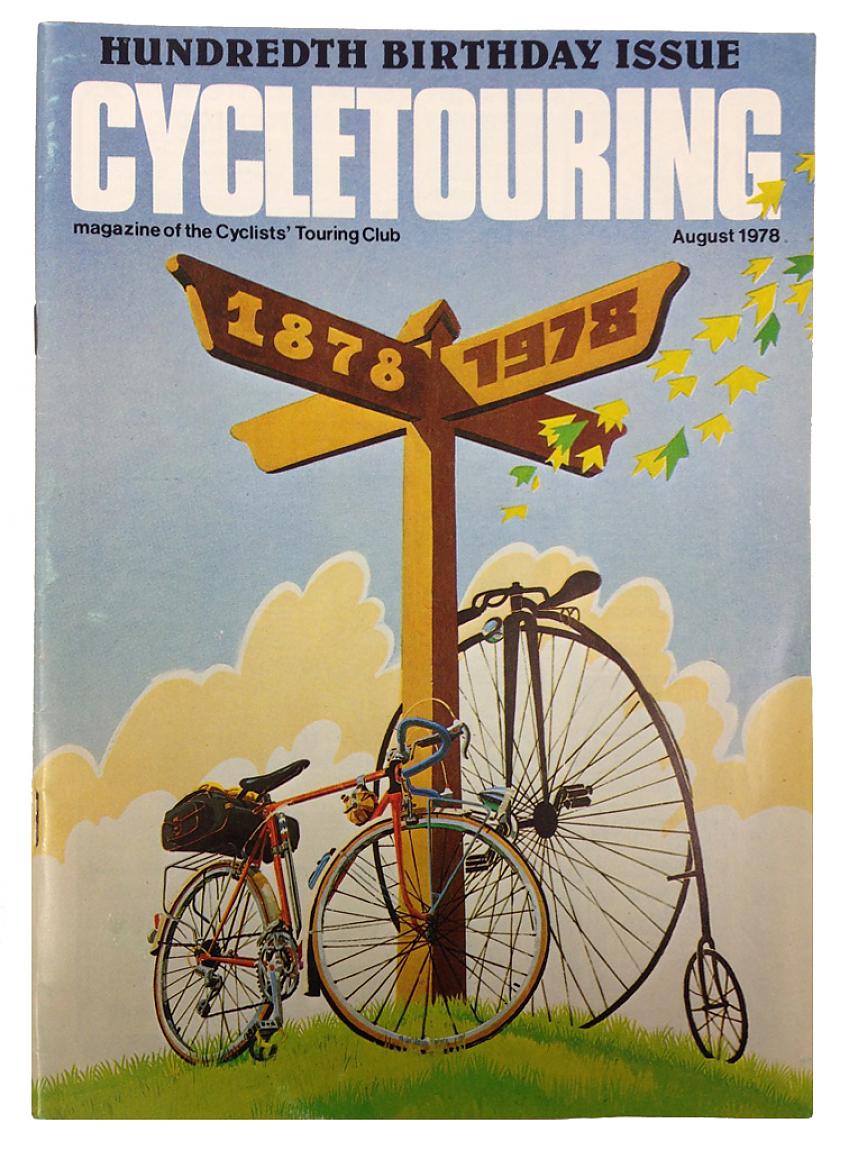 The August issue of the Cycletouring captured the proud centennial spirit of 1978. It featured congratulations from around the world, a pictorial tribute to the club’s founders and event listings galore.

William Oakley published a history of the CTC’s first century, Winged Wheel. CTC members retraced Cotterell’s 1878 penny-farthing ride to Harrogate and the 125th AGM was held in Edinburgh in his honour. A Centenary Relay Ride across Wales, Ireland, Scotland and England involved 500 members.

CTC Birthday Rides took place, a tradition started in 1970 in anticipation of the centennial and which continues today. Four CTC centennial stamps were issued showing the evolution of the bicycle. The 1978 CTC floral competition saw impressive displays planted in public gardens and parks across the UK including the one shown at Figges Marsh, Mitcham. That’s photographer David Magee’s bike in the photo. 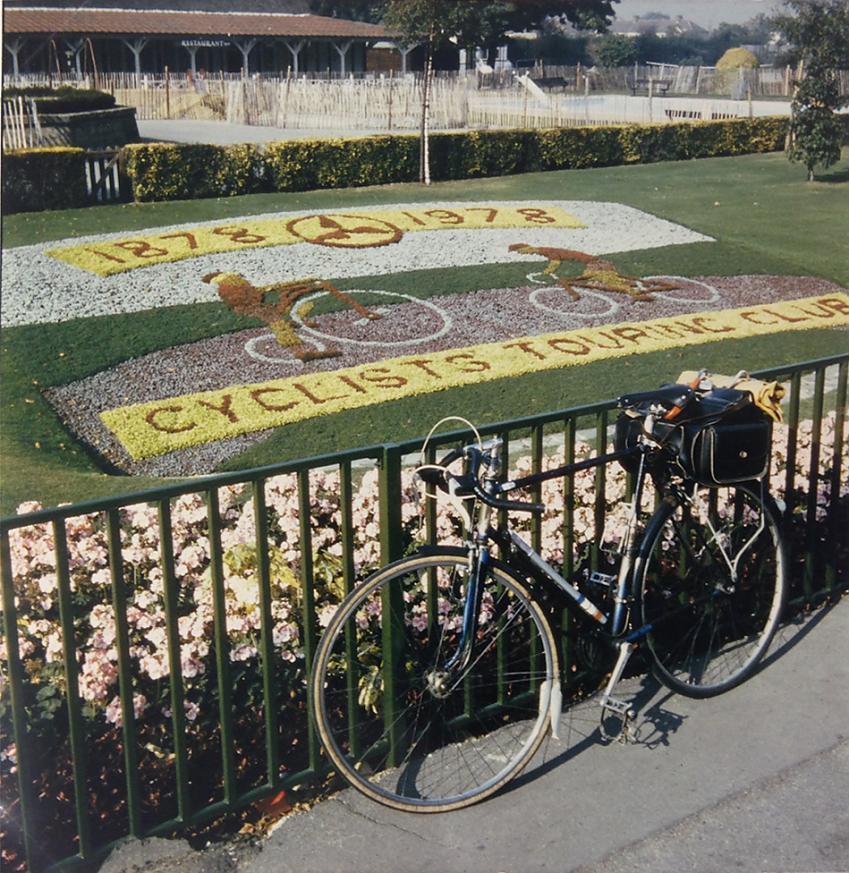 Just in time for its 100th birthday, the CTC surpassed 30,000 members – a triumph after years of waning membership numbers.

The CTC’s most recent big birthday was its 125th.  A full calendar of events celebrated the club’s longevity and service to cyclists including a busy York Rally in June and Birthday Rides and Tea in Dorset complete with literary themed “Hardy Rides.” The Queen sent the club a letter of congratulations. Commemorative 125th birthday memorabilia ranged from shirts to beer mugs.

Dan Joyce, editor of Cycle noted in an editorial on the club’s legacy since 1878 that, “Many things have changed in the 125 years that followed. Cycling isn’t one of them.”

Cycling UK celebrated its 140th birthday in 2018 and is approaching its sesquicentennial in 2028. A clipping in the CTC Jubilee Scrapbook, 1928 seems just as relevant today as it did nearly a century ago. “The CTC did a great deal of valuable work,” The Northern Daily reported, “in breaking down the early prejudices against cyclists; arranging accommodation for them at country inns; and in other ways protecting their interests. The organisation has far more than justified its long existence.”

That spirit lives on in Cycling UK – here’s to another 142 years of cycling advocacy, innovation and support.