This roughly figure of eight route takes you south and east of Wroxham, skirting the Broads that you can walk to the edge of from several points. It’s mainly a very quiet road loop that can be done on any bike, but we have included a couple of short farm track sections which will need care - or bypassing - on narrow tyres.

The short loop includes an award-winning brewery, several pubs and beautiful churches including a dramatic ruin, as well as stunning thatched cottages and barns in picture-perfect villages. There’s also the opportunity to cross the River Bure to Horning when the small ferry is running which allows you to join our Barton Turf route north of the Broads. Either way it gives you a fantastic taste of this unique and charming landscape with its easy rolling roads and rich wildlife and history.

Have a look at the other routes: Norwich railway ramble and Barton Turf. 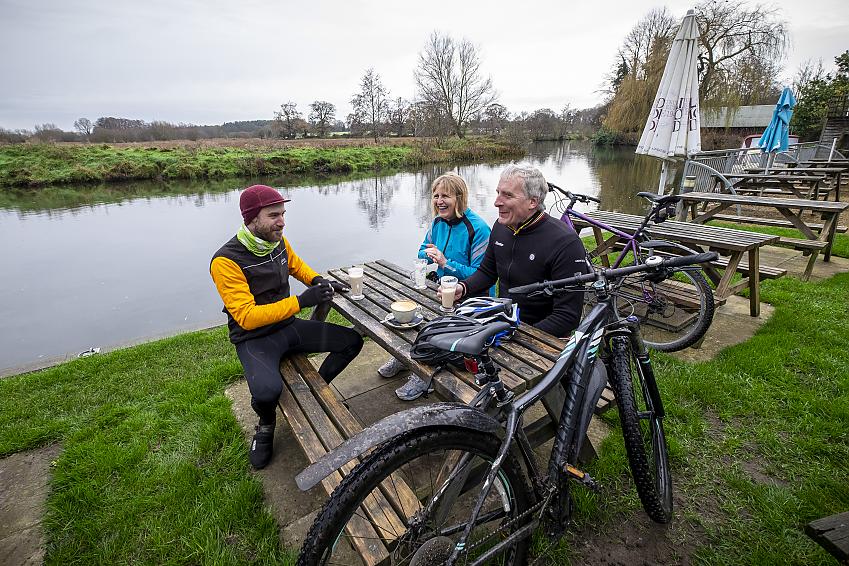 The route rolls out of Wroxham to the south, so you’ll need to cross over the bridge from Hoveton. This can be busy, so you can push along the separate foot section if you prefer.

You turn south off the main road as soon as possible, rolling through leafy suburbs for a few hundred metres before popping out into the countryside parallel to Wroxham Broad. Heading south on the B1140, more adventurous riders can take the left fork onto the farm track that cuts off the corner of the road route.

Either way, you wind along the Vicarage Road to the north end of Salhouse village where there’s a car park with public toilets. From here, a broad footpath takes you north through woods to the beautiful Salhouse Broad.

Back on your bike it’s just over a kilometre to Woodbastwick where the first thing you’ll see is the thatched Fur and Feather pub next to Woodforde Brewery. Here, you can take a guided tour to see the production of CAMRA 'Super Champion Beer of Britain' award winners - Wherry Bitter and Norfolk Nog - as well as other local themed tipples.

The brewery also hosts events such as a classic car show and the ‘Big Dray Out’ festival if you time your visit right.

As you roll round past thatched houses, Woodbastwick’s lovely village green will reveal itself in front of you, the open grass triangle bordered by traditional thatched houses on all sides – even the well with its old water pump is thatched. It’s no longer plumbed in though so don’t plan on filling your water bottles here.

The large flint cobbled and steep thatch roofed church of St Fabian and St Sebastian mostly dates from a Victorian restoration by the same architect who designed the Albert Memorial in London. The basis of the church is 14th century though, and contains a carved wooden screen dating from the 13th century. 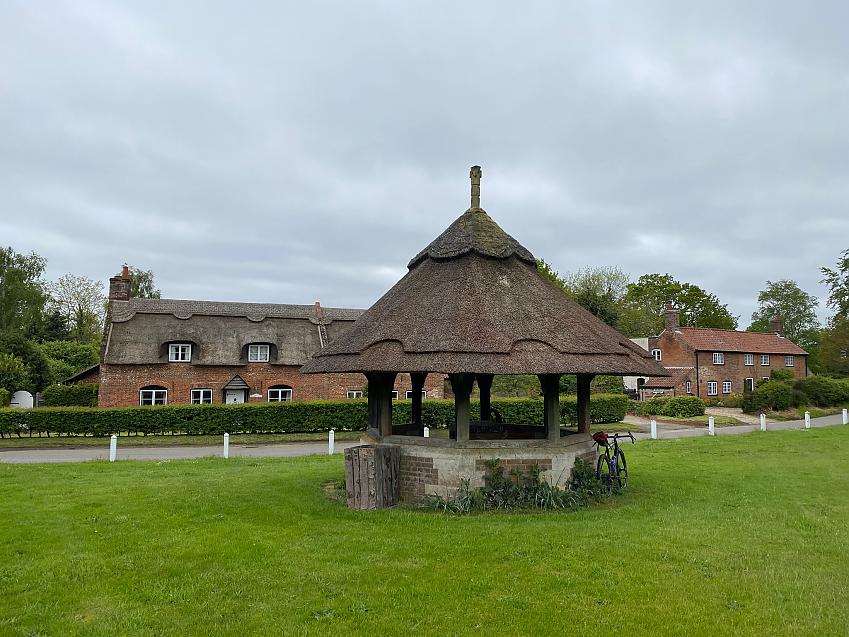 The next church on the route is even more dramatic in some ways, though. You can see the tower of All Saints church at Panxworth as you follow the narrow road south east from Woodbastwick, but as you swing round closer you’ll realise what’s odd about it.

While the square 14th century tower with its neat crenelations on top is perfectly preserved, there’s no church behind it and that seems to have been the case for at least 500 years.

It still has a small graveyard and war memorial, as well as a noticeboard, and when surrounded by tall flowers (as it was when we visited) it’s a lovely - if unexpected - part of the Broad’s mysterious history. Be careful to stay clear at full moon though, as the churchless tower has reportedly been a magnet for satanists in the past. Maybe that’s why it was struck by lightning and had to be restored in 2005? 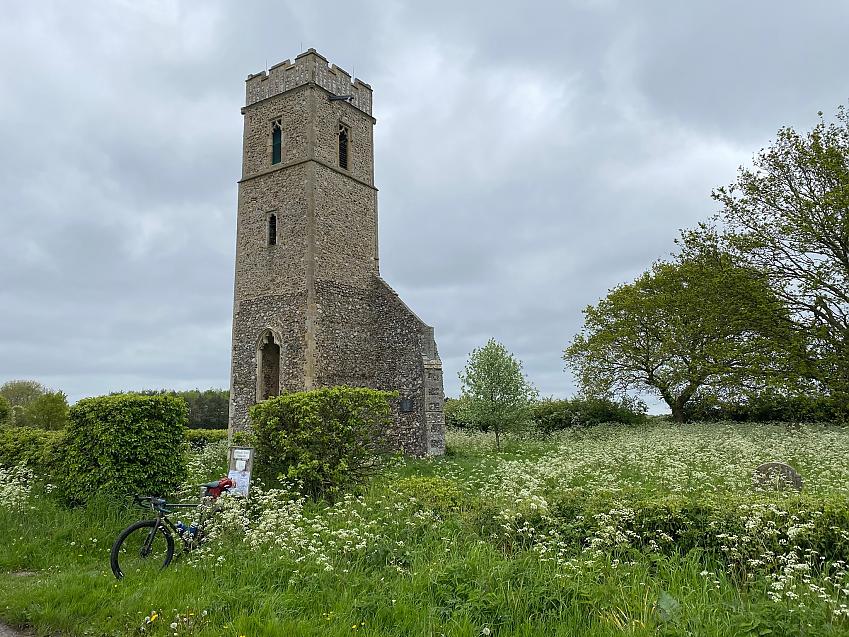 Heading north from the tower, you then turn east towards the village of Ranworth. Depending on your tyres and appetite for rougher tracks you can either stick to the road though the centre of the village or loop south and then east on an easy going, hedgerow-lined farm track. This takes you along the edge of South Walsham Broad which you can see glinting through the trees on a summer’s day.

Hooking round under the canopy of broad leaf branches don’t be surprised to see deer and hares prancing through the fields and be sure to stop and admire the traditional farmhouse and thatched barn of Leist’s Farm. When we passed, they were drying more reed sheafs for thatching under covers in the sun and inside the low-browed barn.

Back onto the road in the village, the Maltsters Inn has been quenching the thirsts of Ranworth locals and visitors since 1760. You can also park your bike and take the short pathway that snakes through woods filled with bird song to Malthouse Broad, where the thatched building of the Norfolk Wildlife Conservation Centre floats near the bank.

Cathedral of the Broads

Back in the saddle, you skirt the Broad on a back lane, past beautiful cottages before turning south under the watchful gaze of the massive tower of St Helen’s. Founded by the Saxons, the majority of the current flint cobble constructed building is from the 14th century. The interior is rich with mediaeval paintings and stained glass, and a 15th century illustrated manuscript is on display inside too.

The sheer size of the church and height of the tower - funded by wealthy local wool merchants - has also helped earn it the title of “Cathedral of the Broads’ and it was designated a World Heritage Site in 1962. 89 spiral steps and two ladders take you to the roof where you can see almost the entire broads, the Happisburgh lighthouse and the tower of Norwich Cathedral on a clear day.

Legend also says the ghost of a monk named Pacificus from nearby St Benet’s Abbey can be seen praying in the church or rowing across Ranworth Broad with his little dog, still intent on repairing the damage done to St Helen’s during Henry VIIIs reformation.

From Ranworth, you roll back towards Woodbastwick with a rare up and down (don’t worry, it’s only 10m of elevation) through the woods of the aptly named Hilly Holey and then at the T junction you have a choice.

The Ferry Road – perhaps unsurprisingly – takes you north to the River Bure at Horning. Here, if you’re lucky, the tiny ferry will take you and your bike across to Horning on the far side and you can join our Barton Turf route, or just take time to look around the marina or have a pint at one of the several pubs. Even in summer and holidays the ferry can be a bit erratic in its operating times though (checking on the Horning Ferry Facebook page seems to be the best bet) so you’re not guaranteed to get over the river.

The quiet lane across Bure Marshes is a real highlight of the route though, as is the busy riverside, so the diversion is well worth taking anyway. Just be prepared to get your feet wet if it’s been raining recently as it floods easily. 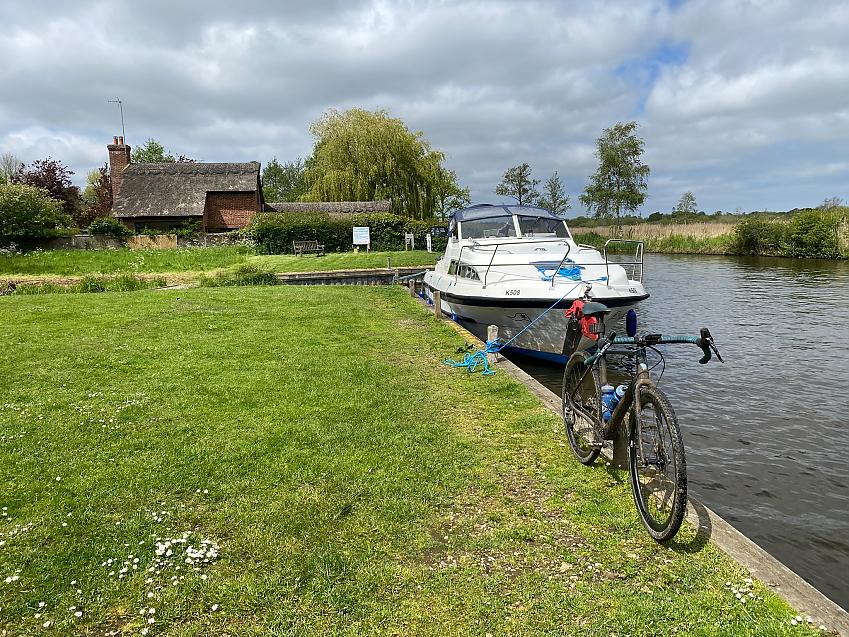 Back tracking to Woodbastwick, you’ve got the opportunity to try another award-winning brew at Woodforde’s before splitting off the outward leg and down through the linear village of Salhouse, with its eclectic mix of modern and mediaeval buildings. At the far end, turn left and past The Bell pub onto Bell Lane, which takes you due north past a solar farm and to the back way wiggle into Wroxham.