This route is ideal for a gravel, touring/hybrid bike or hardtail mountain bike, with quiet single-track roads guiding you along the River Dour, and wonderful old mill, before elevating you up into the rolling hills.

You will pass the local banger car racecourse, before pressing onwards to explore some quiet valleys and rougher tracks of your own, following byways and back-lanes to cross the Alkham Valley. After rising to the top of a hill once more, you are rewarded with a thrilling descent to finish the ride back at Kearsney Abbey, where refreshments and beautiful gardens await you to round off a wonderful day of exploring.

Have a look at the other routes: A Dover-Deal Sandwich and Samphire Hoe. 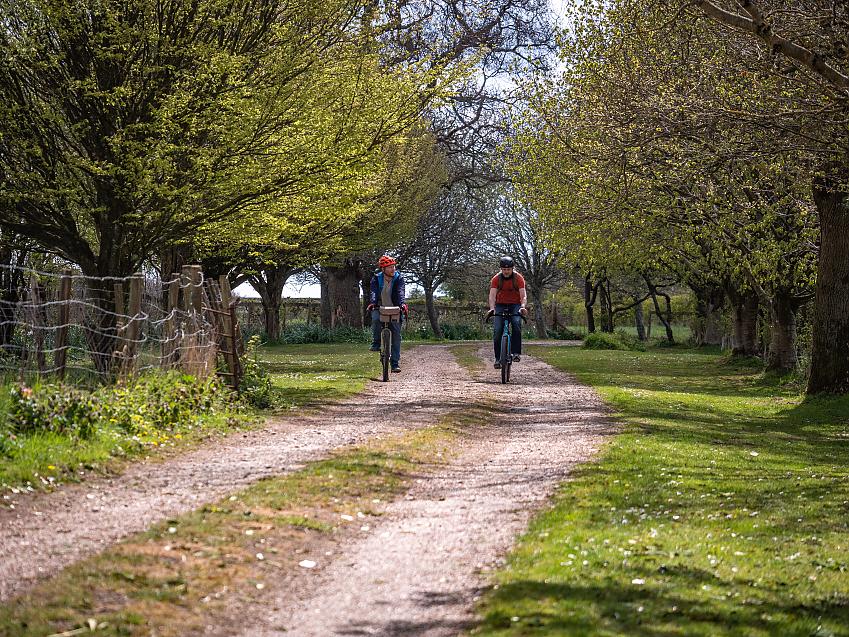 Our cycle route starts in the Alkham Valley, by Kearsney Abbey and Russell Gardens, the most popular historic parks in Dover, set in an Area of Outstanding Natural Beauty. The origins of both parks can be traced back to grand country houses and estates built for prominent local industrialists in the early 19th and 20th centuries, with carefully designed landscapes and planting to provide the lovely slopes, woods and lakes that you see today.

The name Kearsney is derived from the French cressonnière, a place where watercress grows, and the abbey can be traced back to the Norman Conquest, with the park’s existence being attributed to John Minet Fector. A local banker and merchant, he built a grand mansion on the site between 1820-1822 with ten acres of open parkland and lakes, with the River Dour flowing through the park, feeding two adjoining ornamental lakes. It provides a haven for waterfowl and contains trees such as beech, lime and yew as well as some heritage trees, including a Cedar of Lebanon which is believed to be one of the oldest specimens in the country, and a rare, semi-evergreen, Lucombe Oak.

Russell Gardens is laid out in a more formal style, and is Grade II Listed in the English Heritage Register of parks and gardens of special historic interest. It covers ten hectares with terraces, a 170m long canal pond, Palladian-style pergola bridges and a boathouse pavilion. Both parks are open every day of the year. 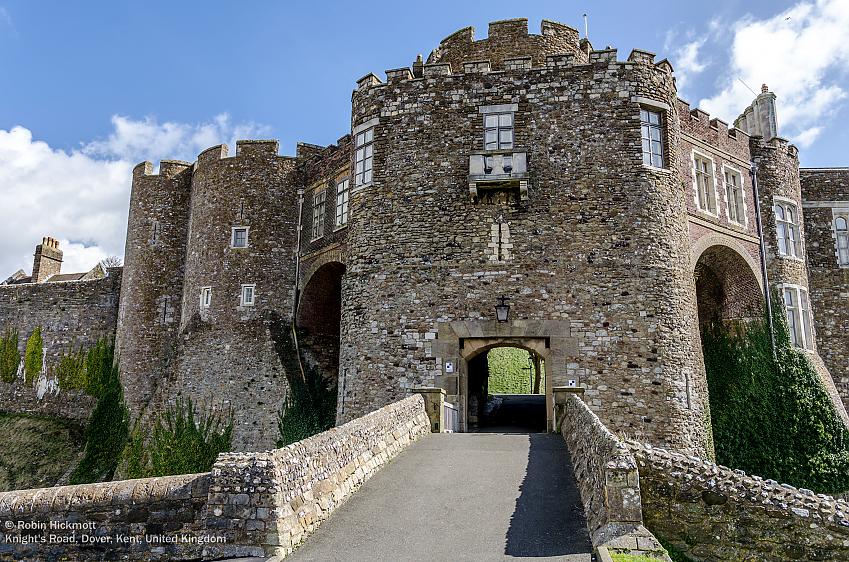 The cycle route leads you east from Kearsney Abbey, to the village of River, following the short River Dour, a chalk stream which flows from the neighbouring village of Temple Ewell, and is just 6.4 km long.

It originally had a wide estuary on the site of modern Dover, a natural harbour for the Bronze Age settlers and traders, but today it flows into the English channel at Willington dock in Dover Harbour, through a culvert.

One of only 200 chalk streams in the world, the River Dour is a rare habitat for flora and fauna, with exceptional water quality due to filtering through the chalk beds, and a stable temperature. It supports a rich mix of botanical and invertebrate life such as river water crowfoot and starwort plants and is one of the UK’s most important rivers for brown trout. 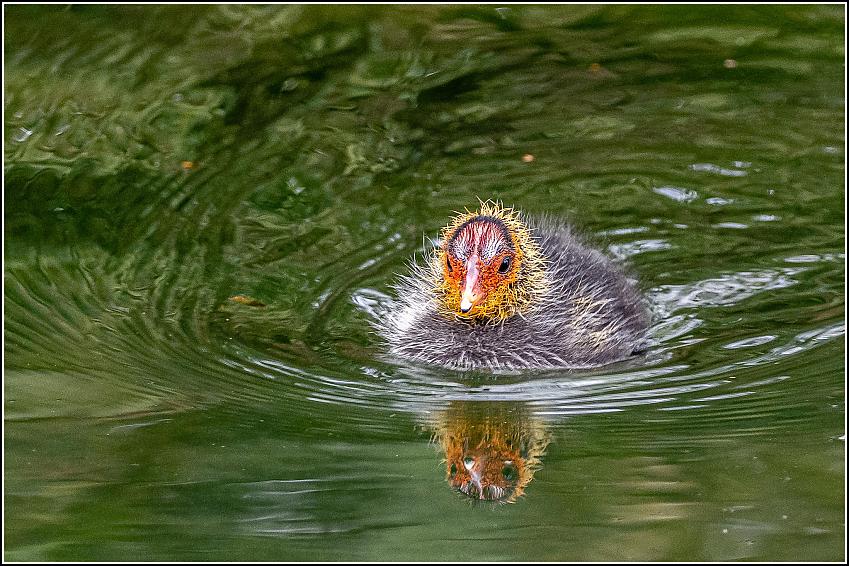 It’s not long before the route delivers you to another significant location along the River Dour, Crabble Corn Mill; now a working museum, demonstrating Georgian and Victorian engineering excellence using the power of water. The six floors of exhibits and milling machinery show the process of turning wheat into flour, and you can even buy the flour as the mill still works today.

The current structure was built in 1812 alongside an existing mill which was later demolished, and records show that there has been a mill on this site since at least 1227. Today the mill is owned, operated and maintained by Crabble Corn Mill Trust, rescued from demolition and opened to the public in 1990.

It is human griding power required next though, with a steady climb along Crabble Lane, past the local sports grounds and stadium, with nearly 100 metres of ascent in just one kilometre!

After skirting around an industrial estate, the route follows a small single track road, passing Nemo Down, a small nature reserve offering a stark contrast to the industrial estate virtually next door. This idyllic hillside offers great scenery as well as an abundance of wonderful flora and wildlife such as buzzards, which you may spot as you make your way to the end of the road.

Here, you pass a rather different attraction: the Dover Raceway. This banger car racing circuit offers a popular spectacle, with a relaxed atmosphere and great entertainment.

Your route is quickly back into nature though, heading off-road along a quiet and peaceful grassy byway track that follows the valley bottom through farmland. Just off the route, tucked away by Capel Church farm, is the beautiful St Mary’s church, and in the other direction, St Radegund's Abbey, once a medieval monastic house, now a working farm, where the ruins of the Abbey are visible from the road. Both make an interesting detour, while the route offers an exciting descent to the village of Alkham – although if it’s damp or your tyres are slick, you may prefer the to take the road directly to the village. 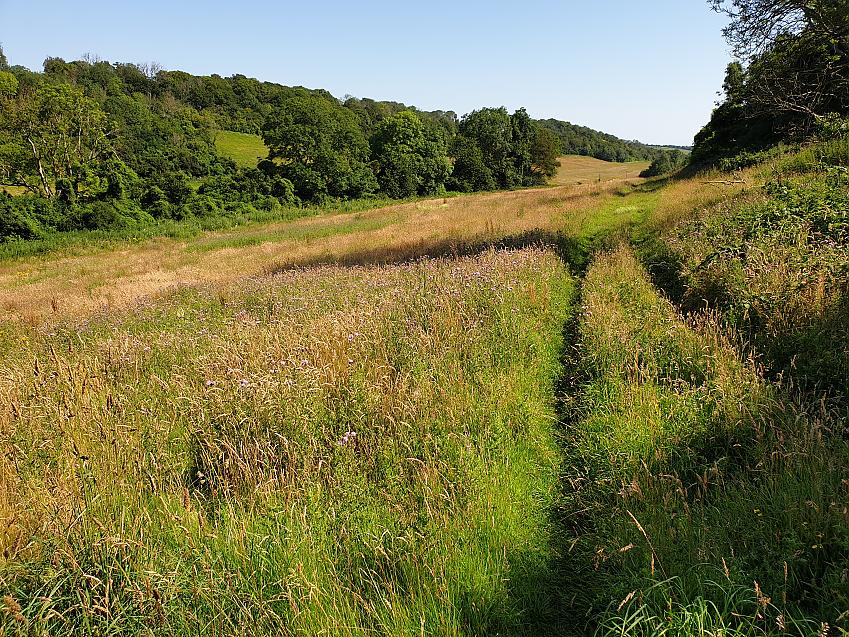 Alkham is home to a fabulous 5-star hotel and countryside restaurant, The Marquis of Granby, where you can indulge in some fine refreshments, and visit the magnificent medieval church of St Anthony just out the back, set on a hillside overlooking the village.

It is thought that there was once a pagan temple, replaced by the church after the arrival of St Augustine, dating back to around the 12th Century, although it is also bang up-to-date and can claim to have been the first carbon-neutral church in Kent, with solar panels installed (out of sight) on the roof in 2012. The church is usually open to visitors during the day and hosts a tomb slab with a 13th Century Latin inscription inside - thought to be among the oldest in Kent.

Leaving the village there is the option of tackling the climb up Warren Lane, known to be one of Kent’s most brutal hill climbs, but you can opt for an easier ascent along the single-track Slip Lane which winds its way more gradually up through the valley. You could continue along this smooth surface if you wish, but if you like a bit of a challenge, the route dives off-road once more to climb a byway, to Chalksole Green. Back on a good and level surface this quiet road winds around some lovely hamlets and small vineyards to the village of Ewell Minnis, where you once again join the rough stuff.

Following along the ridge of the hill, along a quiet track, the route only has one way to go to the finish now, and that’s down, plunging into the shadow of the trees. The route heads steeply down the hillside for an exhilarating descent and ends by bursting back out into the light and bustling valley bottom at the doorstep of Kearsney Abbey.

Now you can enjoy some well-earned refreshments and beautiful scenery whilst you reflect on the history, nature and architecture that all hide within this intriguing valley.