Samphire Hoe is open from 7:00 am until dusk and has pay and display parking. Day fishing permits are available from the tea kiosk.

This route is suitable for any type of bike, including a road bike, as it follows a hard and well surfaced cycle path along the tops of the cliff, to the edge of Folkstone. With a good all-weather track and an out-and-back ride to provide easy navigation, once the climb up through the tunnel at the start is done, it is easy riding, so suitable for novice riders.

The route turns around at the Battle of Britain memorial, to provide a thought-provoking rest stop, before returning back along the coast. There is also an option at the start or finish to add a short, easy loop around the Samphire Hoe Country Park, along a cycle track, to enjoy the wildlife and plants found there too.

Have a look at the other routes: Kearsney and Alkham and a Dover-Deal Sandwich. 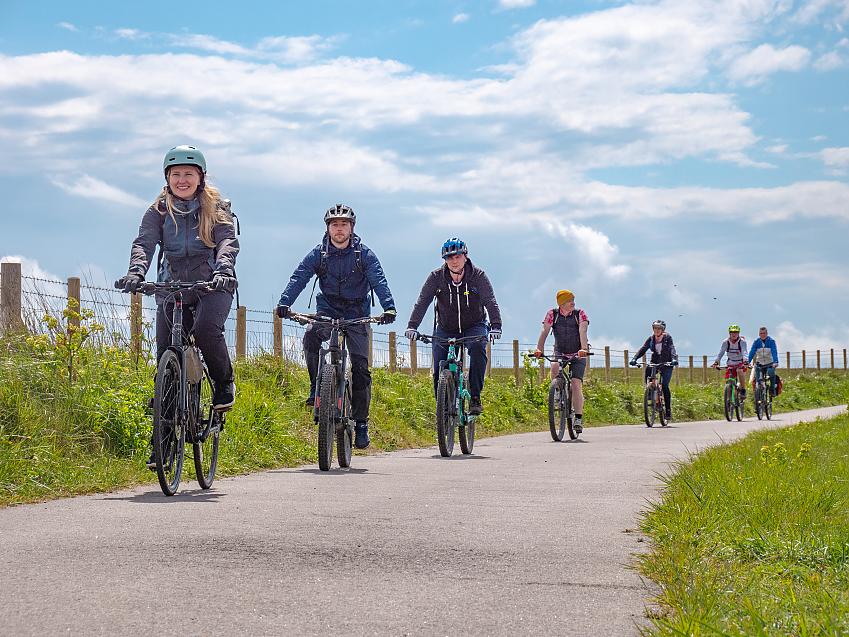 The route starts in Samphire Hoe nature reserve, located at the base of the White Cliffs two miles west of Dover, which was created in 1997 by using 4.9 million cubic metres of chalk marl excavated from the creation of the Channel Tunnel.

It was designed as a place for both people to enjoy and wildlife to thrive; popular with anglers and walkers, as well as being home to a huge variety of wildlife and a number of nationally rare plant species including the Early Spider Orchid. There is an optional gentle cycle route here of 2.3km that loops around the perimeter of the park and along the sea wall, which is worth a spin.

To start our route, join a track out of the back of the car park which leads you left below the stunning cliffs, skirting around the back of the park and past some lakes, before heading to the sea wall. You now follow the smooth concrete surface which makes easy work of the return leg as you follow the sea wall, gliding past the many anglers that come here to fish from up high on this wall.

Beware that in bad weather high waves may mean that the sea wall access has to be restricted. At the end, with stunning views of Shakespeare Cliff, you make your way up a zig-zag path and should now be nicely warmed up and ready to enter the (4.8 metre) tall tunnel. You should take the footpath through the tunnel, and it is recommended that cyclists walk, as you make your way upwards for a few hundred metres to the light at the end of the tunnel.

Having left the peaceful haven behind you, at the top your senses go into overload with the bright sunlight and roar of A20 road. 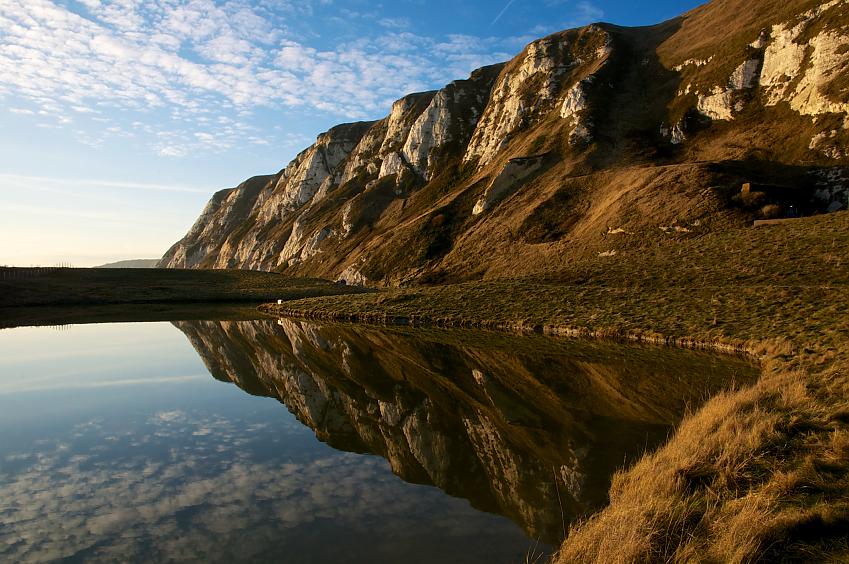 Turning left, you follow National Cycle Network route 2, which runs parallel to the road briefly before it peels away for a gentle climb and into quieter surroundings. The North Downs Way trail along the top of the cliff top is not accessible by bike, so Houghton Battery that sits atop here has to be visited by foot. However, following this well surfaced cycle path will see you pass right by to the large concrete Sound Mirror on Abbott’s Cliff.

This large concrete structure has a dished face that looks out to sea, towards France, and was used to reflect sound via the concave profile, concentrating and amplifying the sound to a focal point. This forerunner of radar, invented in 1915 by an English acoustic pioneer, Dr William Sansome Tucker, was able to detect enemy aircraft around 15 miles away, providing the British army an extra 15 minutes of preparation time. Operators used a stethoscope, stationed near to the sound mirror, and required specialist training to identify the different sounds, and it was so complex that they would only listen for around just 40 minutes at a time.

Although you won’t hear much from it now, you can still sit and appreciate the innovation, and the view isn’t bad either. 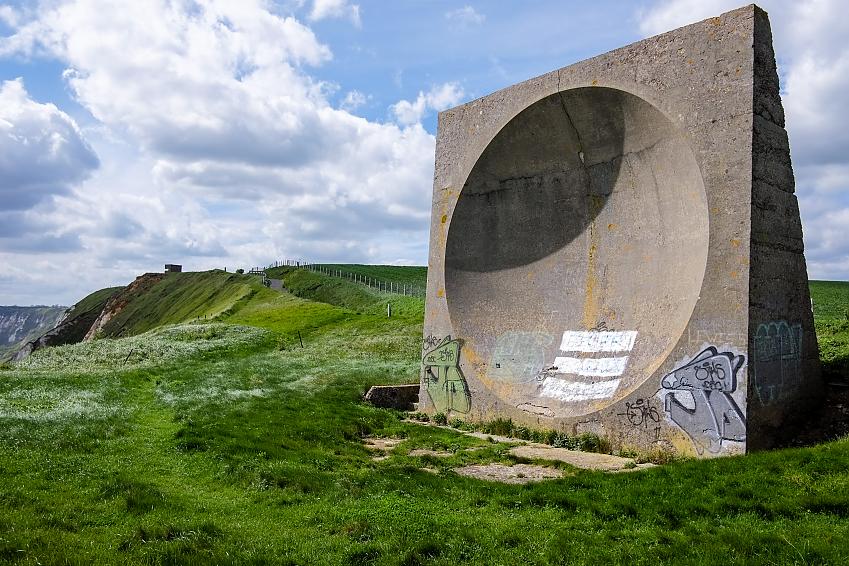 The route briefly joins alongside the New Dover road, on a shared cycle and footpath, before peeling off to join the Old Dover Road, passing between a line of houses and the fabulous view along the cliff top.

The Clifftop Café just along here has a wonderful spot, clinging to the side of the cliff, with amazing panoramic views to enjoy along with your refreshments. On the move again, you follow the Old Dover Road back to re-join the New Dover Road, which immediately delivers you to the Battle of Britain Memorial site, close to the outskirts of Folkstone. Located high up on the White Cliffs at Chapel-le-Ferne, the site commands wonderful and far-reaching view out to sea and makes the ideal location for this monument to the aircrew who flew in the Battle of Britain, 10 July to 31 October 1940.

A central statue of a seated airman looks out to sea, to where the Luftwaffe would have appeared in 1940, surrounded by the badges of all the Allied squadrons and other units that took part in the Battle. The Memorial Wall contains the names of all the aircrew known to have flown during the Battle of Britain, listed in alphabetical order, without rank or decoration, to highlight and respect everyone who contributed to the RAF’s victory.

You can spend a long time here reading all the information boards, admiring the replica aircraft, enjoying the view, and hopefully the planes flying overhead too. Be sure to visit The Wing - the Battle of Britain Memorial Trust’s visitor centre building. Opened in 2015, it is shaped to look like the wings of a Spitfire plane, complete with its famous uplift. Cycle parking is available outside, and inside you can visit The Scramble Experience, a hands-on attraction that uses audio-visual effects and video wall to show something of what was experienced in the summer and early autumn of 1940. Up on the first floor an open balcony reveals more superb views across the Channel to France, and the Cockpit Café cooks up some good refreshments. 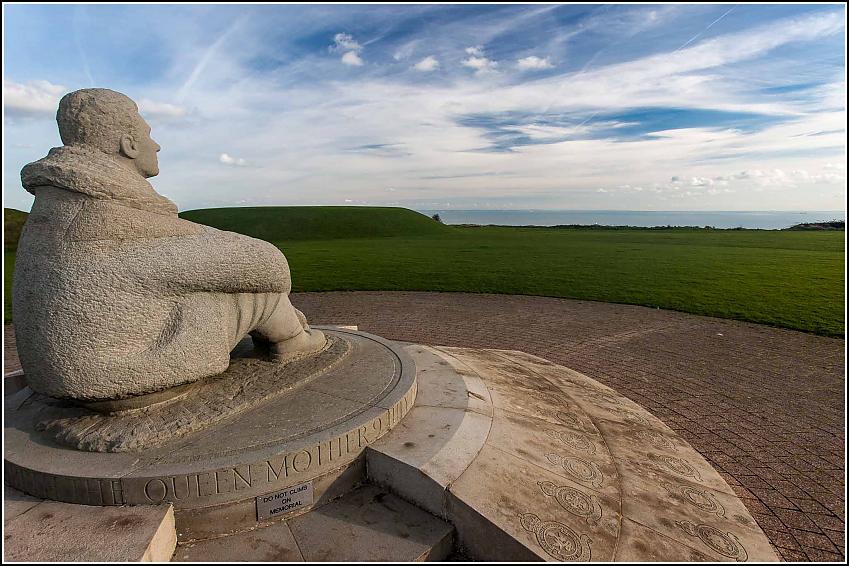 Note: Another place of aviation interest nearby, but off of the route, is The Kent Battle of Britain (aviation) Museum, which is just north of Folkstone, in Hawkinge. It is home to a large collection of WWII aviation artifacts and memorabilia, and worth the trip to learn and appreciate “how so much is owed by so many, to so few” regarding the air force personnel.

Now it is your time to return, and with the knowledge of where to go, a good track, gravity and hopefully the wind on your back too, the journey should be swift, possibly allowing you time to stop off and visit the Citadel Battery, if you so wish. Located just west of the main fortifications on the Western Heights it lies outside of the defensive ditch system which surrounds the Western Outworks and Citadel and was a later addition to the area's defences. Construction began in 1898 and was completed in around 1901 with three 9.2" Breech Loading guns mounted in the large concrete emplacements.

The battery remained armed throughout the beginning of the 20th Century and was manned during WW2, with magazines for the guns located in vaulted rooms directly below the guns, although the entrances have now been filled with earth.

The Citadel was most recently used as the Dover Immigration Removal Centre, and so was off-limits until at least November 2015 when the centre was closed down. Many of the Citadel's original buildings remain preserved within.

Once back at Samphire Hoe you can enjoy some well-deserved refreshments at the café there or maybe you just might have time for that extra loop of the nature reserve that you missed at the start….