This southerly route rolls gently out through the quiet but genteel village of Overstrand, across the coastal Poppylands with their 360º vistas, to the seaside village of Mundesley with its much more lively feel, beautiful Blue Flag beach and rows of colourful huts.

You loop inland past a preserved windmill and huge mediaeval barn that’s now a bat sanctuary, into an area of dedicated ‘Quiet Lanes’. Then it’s a parade of ancient carving covered churches in similarly quaint villages with flower filled gardens and honesty boxes for handmade jam joining the dots back into Cromer.

This is one of three routes starting from the Cycling UK EXPERIENCE hub in Cromer.

Have a look at the other routes: Great Wood gravel ride and Cromer roamer. 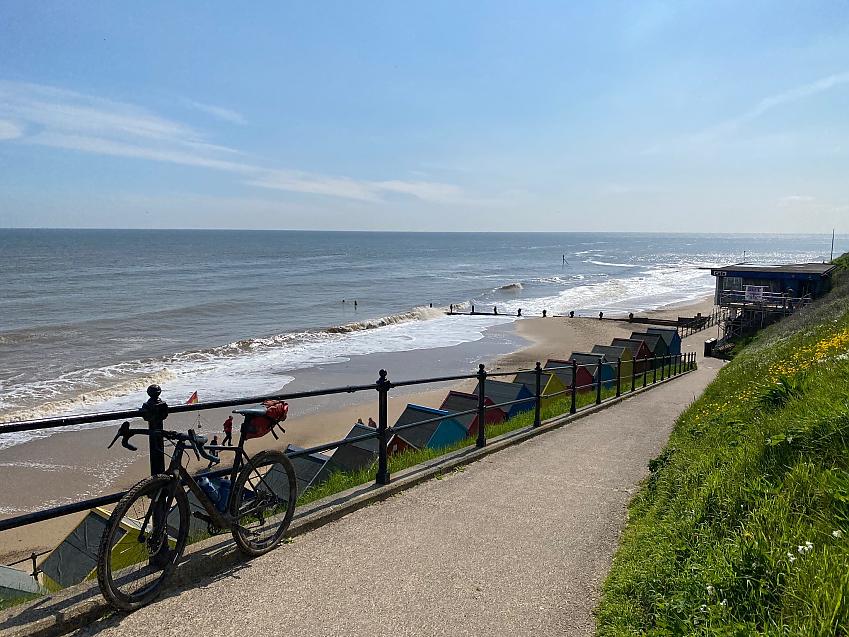 The village of millionaires

Overlooking Cromer Pier is a great way to start this tour of Cromer’s heyday. Be sure to take in the eclectic mix of buildings on the town’s back streets as you patiently filter out of town through the one way system.

Follow the curving coastal road as it climbs, south opening up views of the landscape to come. Try and spot the rare Bagot goats used as horned hedge strimmers on the coastal cliffs before you divert into Overstrand.

It might be known locally as the ‘village of millionaires’ and have several big houses and a Methodist church all designed by famous architect Sir Edwin Lutyens, but it’s definitely not Beverly Hills. Then again, we’d much rather visit a village with an information kiosk housed in an old red phone box that documents the fascinating history of the coast, than tangle with Ferraris on Rodeo Drive.

In the right season a riot of red bursts into life across the fields and hedgerows as you roll through the ‘Poppyland’ first made famous by Victorian writer Clement Scott, a renowned theatre critic who was nevertheless charmed by this part of Norfolk.

Avoid the temptation of the coastal path (we joined it by mistake and it’s awkwardly un-rideable) – instead, rejoin the coastal road through Sidestrand, where you’ll pass the remains of surveillance and gun emplacements from when the beaches of this part of the coast were a potential target for German invasion.

Beacon Hill is a reminder of even older conversations up and down the shore by signal fires, and also marks the start of a long, gentle descent into Mundesley. While riding isn’t allowed on the promenade, it’s well worth a push down and back up to see the gaudy beach huts and have a snack in the surf cafe while you look out over the pristine Blue Flag beach that extends as far as the eye can see in either direction.

With a butcher, green grocer, fishmonger, florist, craft and an art shop and regular convenient stores, inshore Mundesley is also well worth an explore. A skate park, surf school and a maritime exhibition that’s possibly the smallest museum in the UK offer the chance to learn entirely new skills or just a deeper appreciation of how important the sea is to this community and the whole Cromer area. 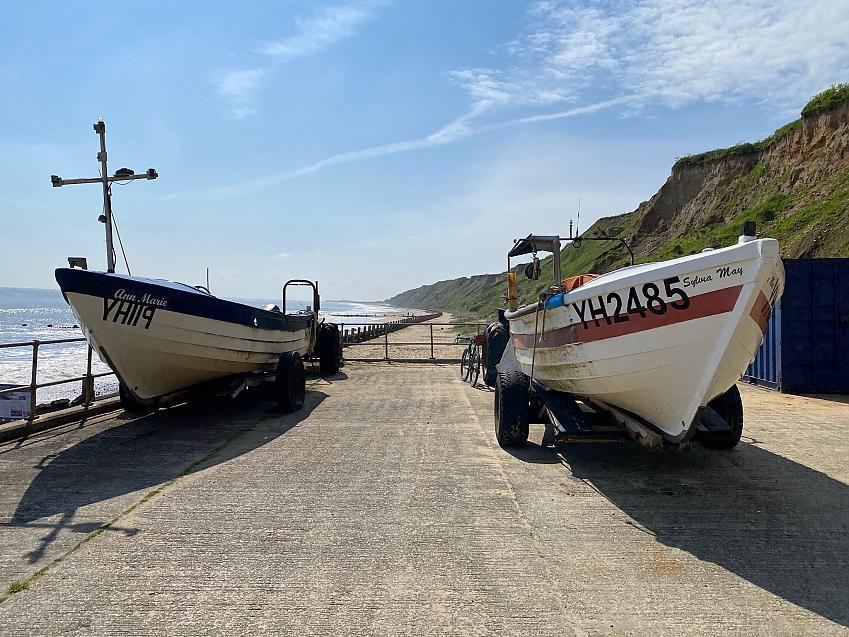 There are all sorts of short cuts inland at this point, but we think it’s well worth heading a little further south to pass one of the few surviving windmills in the area. A reminder of how rich an agricultural area this is and also underlining links to lowland Europe that you can find evidenced in the archaeology since the middle stone age.

Paston Tithe barn is an incredible highlight of the beautiful medieaval farm courtyard of Paston Hall and the ancient rafters under its vast thatched roof are now a home for rare bats. 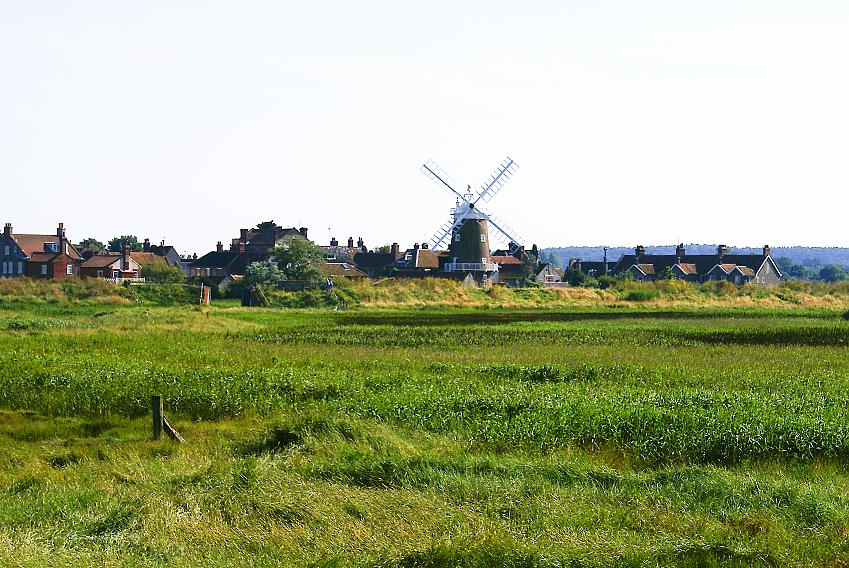 From Knapton, you’re joining the byways of the ‘Quiet lanes’ project, a joint initiative between the Norfolk Coast Partnership and the Countryside Agency. The idea is not just to create a wonderful web of cycling, walking and horse riding friendly routes, but also to reduce traffic and maintain the old world character of this charming rural area, and we’re delighted to see how well the scheme is working.

The flora and fauna filled lanes and hedgerows are the perfect way to join villages like Knapton, Trunch and Upper and Lower Southrepps – where it seems a Grade I conservation-listed medieaval church with exquisite carvings and paintings is the centrepiece of each beautifully kept cottage collection, and the farm houses between are no less picture perfect.

Rich woodland and a gentle rise and fall topography deliver you quietly back into Cromer feeling more like you’ve been on a yoga retreat than a bike ride. 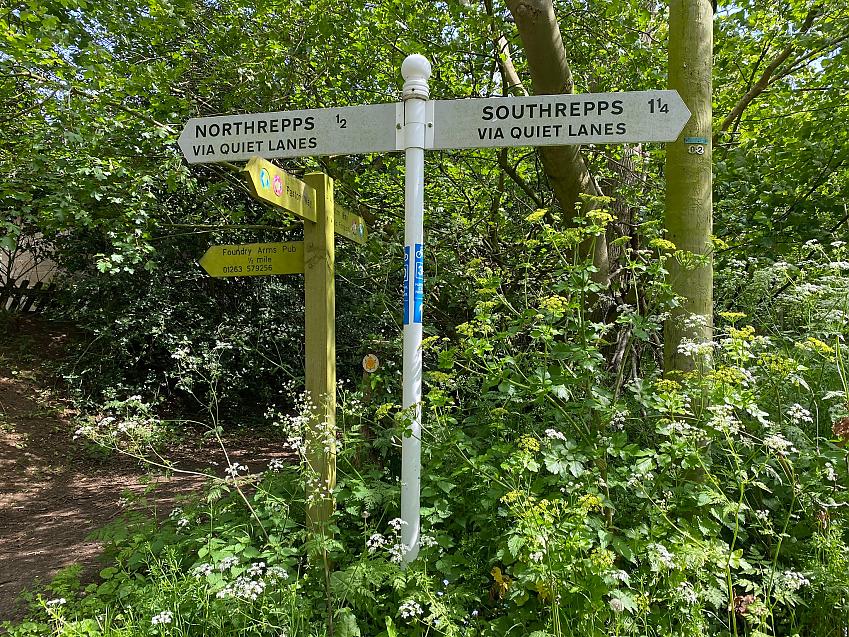