Our off-road loop takes you out through the woods, past Amazona Zoo, before looping south through the beautiful grounds of Felbrigg Hall.

You then switch from Tudor splendour to off-road adventure as deserted back lanes past mediaeval farms become gravel and grass bridleways swinging round up to the north again, where you’ll wind through the woods towards the kind of panoramic hilltop coastal view you’d never expect in Norfolk. There’s even a short but sweet technical descent before you contour back into Cromer on a mix of snaking singletrack, pasture side path and a scenic golf course.

This is one of three routes starting from the Cycling UK EXPERIENCE hub in Cromer.

Have a look at the other routes: Mundesley meander and Cromer roamer. 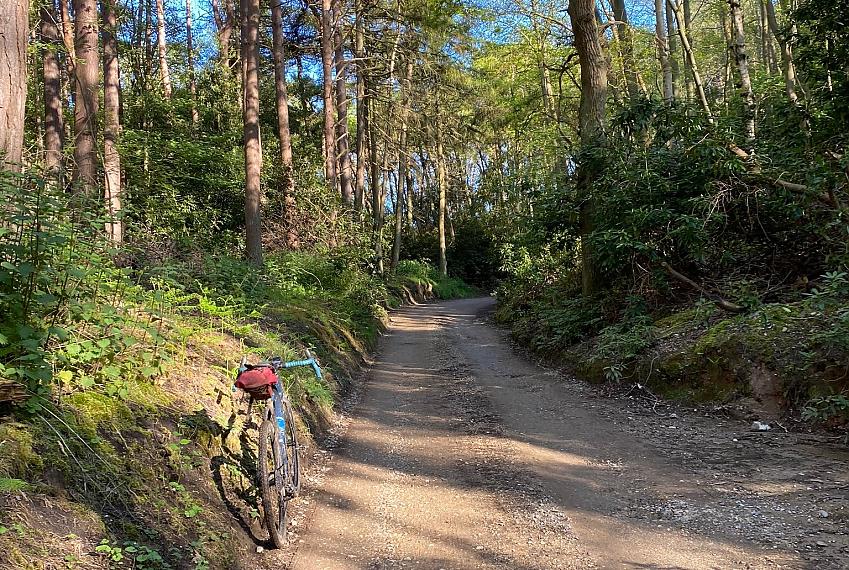 You might not think of the north coast of Norfolk as a great gravel riding destination, but we ended up adding so many extra highlights to the first draft of this off-road excursion it was even longer than our Cromer roamer road route. We’ve edited it back to just one stately home rather than a whole string of them though and it makes a great way to start exploring just how varied this area is.

Bear with us for the first kilometre of suburban and supermarket Cromer as you suddenly pop out into the shrub and grass common of Muckle Hill before riding past a surviving windmill alongside the railway. Down the hill, you turn left under the rising viaduct and the right past East Runton village green. This opening section of route is also the closing one, so from here you have a choice of direction clockwise (the way we’ll describe it) or counterclockwise.

Narrow bush-lined singletrack through pastures climbs into woodland above a caravan park, and then you’ll suddenly be climbing on a broad gravel track under a broadleaf tree canopy that you’d think could be anywhere in the UK, far apart from most people’s preconceptions of Norfolk.

Jinking along the road past mansions in huge gardens, you’ll cross the main road and head south towards Aylmerton. Keep an eye out for the church hidden behind a high wall on your left though, and turn left onto the farm track just past it rather than continuing into the village. This broad track can be a bit puddley even in summer, but there’s plenty of space to dodge around and you’ll soon be at the gatehouse lodge for Felbrigg Hall. Alternatively, heading straight on through Aylmerton makes a perfect short cut point that almost halves the overall distance if you don’t fancy the extra Tudor detour.

The estate road is one way for tourist traffic, but the National Cycle Network access is dual direction, so ignore any confused gestures but be prepared to give way over the speed bumps.

The reveal of the Tudor stately home is breathtaking though, and you can’t help feel a bit ‘Downton Abbey’ as you roll through the beautiful parkland to the walled garden tea room and car park beyond the gate at the far side. You’re still on estate road for another kilometre to the twin gatehouse cottages, which is blissful but means the short section of busy B road afterwards might come as a shock.

You turn off it after a few hundred meters downhill, but you might need to rummage around to find the entrance to the bridleway south. The dead straight track with its wooded right hand side is an aristocratic section of aggregate once you’re on it though. 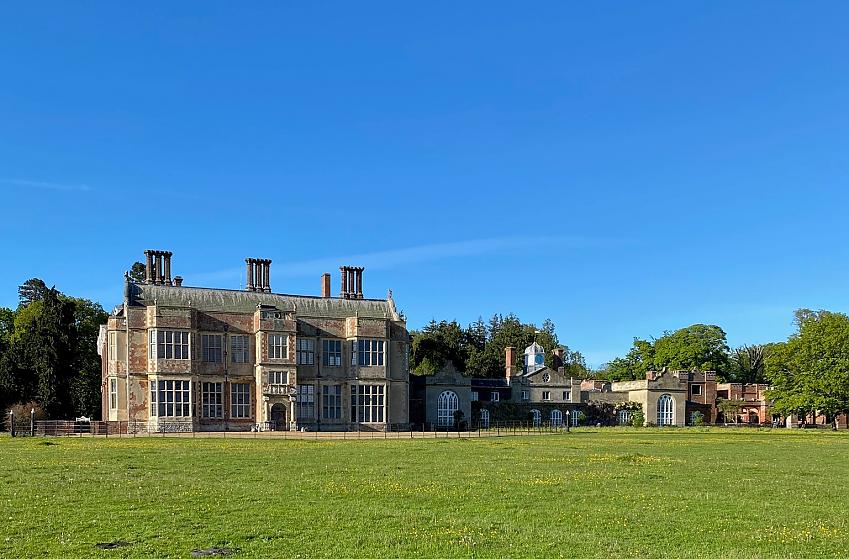 The small hamlet of Metton with its moated mediaeval farm house and plain church is as far south as our route goes, but it’s the obvious point to extend if you want to explore further.

As we said at the start, there’s a whole selection of stately homes to join up with deserted lanes and farm tracks including Thurgaton, Sustead, Barningham, Wolterton and Mannigton Halls, or the jewel in the local crown of grand houses: Bickling Estate. This National Trust-owned house is the birthplace of Anne Boleyn and contains a collection of early modern books within its stunning rooms. It sits at the centre of a huge park with a shop, two cafes plus walks and multi-use trails around a mausoleum and other follies in the grounds. Its position just north of Aylsham makes it the ideal point to continue south into the network of trails around the Wroxham EXPERIENCE hub.

Look out for deer and hares

To keep things reasonable while allowing for the slower average speed and distance on a mixed gravel route though, we carry on to Sustead linking tiny back roads and farm tracks back towards the crossroads, which is also where you’ll end up if you go straight on at Aylmerton as mentioned earlier. However you’ve got here, you head straight ahead on a broad farm track, where we suddenly found ourselves riding alongside galloping deer in the golden fields to the right, and following lolloping hares until they vanished into the woodland of Rounce’s covert.

You’ll need to pay a bit more attention to your steering and less to the idyllic pastoral landscape as you turn north onto double track though, as things can get lumpy under the grass. While the official GPS track takes you a hundred meters left along the main road at the top before doubling back into the woods, you can skip the dance with busy traffic by pushing up the verge a few metres to the right and then fighting your way through the bushes of an overgrown path to end up on the same bridleway.

From here, you’ll be focusing on following the skinny singletrack along the perimeter fence of a quarry, but make sure you don’t miss the detour to the viewpoint as you get to the north-east corner of the fence.

The panoramic view over Sheringham and the surrounding coast from the hilltop nature reserve was totally unexpected on the summer evening we did the recce ride, and created an indelible memory of just how beautiful and unexpectedly varied the Cromer area can be. Take care on the descent off the scarp though, as it’s tight and twisty, so probably better to walk if your riding skills are more road than mountain bike based. 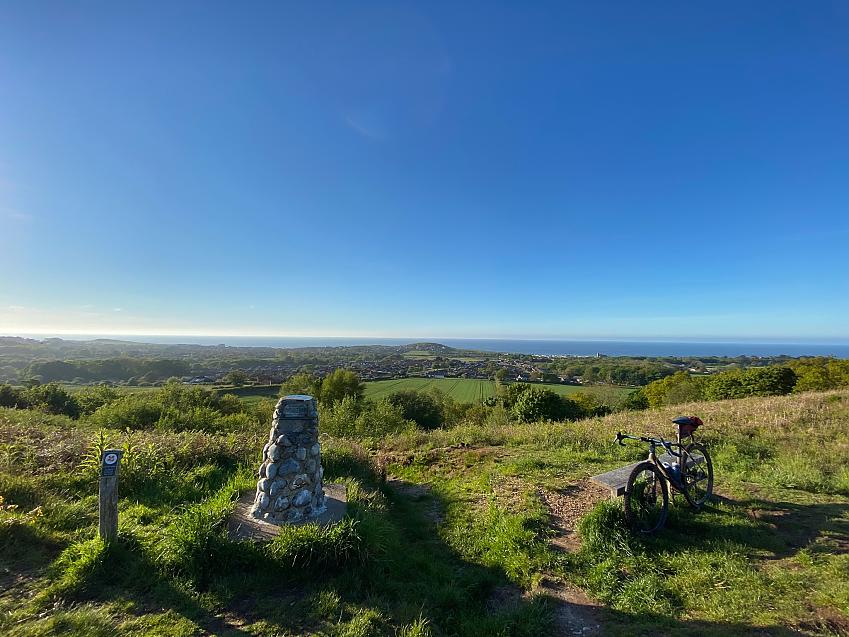 The rest of the ride is relatively sporting too, turning off around the base of the heath on a gravel road that soon becomes a fun singletrack run above the Shire Horse Centre of Beeston Regis.

Then it’s across the road and across the golf links with more scenic views of the West Runton coast, which regularly erodes enough to release another prehistoric find to join its famous mammoth and rhino rebirths. It’s the views that are extinct for a while though, as you squeeze along narrow shrub shouldered singletrack before the track rolls downhill and fires you out past the historic brick houses on the edge of East Runton.

From here, it’s back under the viaduct, retracing the start route back into Cromer to complete a surprising route option out of this most excellent riding hub.