Inspiring cyclists: Amazing Alan gets back on his bike after a stroke and rejoins Cycling UK

Alan was determined to return to cycling after a stroke. Photo by Alex Cuppleditch
By Julie Rand
Friday, 3 July 2020

Inspiring cyclists: Amazing Alan gets back on his bike after a stroke and rejoins Cycling UK

Former disabled time triallist Alan Davy stopped riding after suffering a stroke at 82. Now he's in the saddle again, with help from our Back on Your Bike offer

When 83-year-old Alan Davy lost his right leg below the knee in a motorcycle accident nearly 40 years ago, he thought that he would give cycling a go and started riding with his nearest Cycling UK group, Portsmouth CTC. Unfortunately, after an incredible cycling career that included taking part in time trials and setting up a Great Britain disabled cycling team, he had a stroke some 18 months ago, which put paid to all of that. However, not only has Alan recently started cycling again, he's also rejoined Cycling UK with our special summer Back on Your Bike offer. He tells us his remarkable life story:

"I have been a cyclist since 1983. I first joined the CTC, as Cycling UK was then known, and went on Portsmouth CTC's Sunday rides. Having lost my right leg in a motorcycle accident below the knee, it was quite a challenge for me.

My first run with them involved meeting them in Cosham and then doing a 30-mile ride to the New Forest for lunch! I remember thinking: "Have I overdone it, and am I gonna make it home?" However, I was befriended by a much younger regular rider who helped and encouraged me all the way back and I got home very tired. But that experience did not deter me. Quite the opposite, in fact, because the next Sunday, and for many more after that, I turned up for the Sunday runs.

Becoming a cyclist changed my life big time and I will never regret it, so much so that after three years with CTC, I joined Fareham Wheelers and again joined in their club runs. After a while, I entered a 10-mile time trial and that cautious entry took me into the world of time trialling.

Some competitors were obviously concerned when a guy with one leg passed them in the race!

Gradually I increased my entries and the distances attempted to 25, then 50 and eventually 100-mile races. My times for the events were never the the fastest but respectable in the circumstances, and some competitors were obviously concerned when a guy with one leg passed them in the race!

Then in 1990, I was contacted by Cycling Weekly about setting up a Great Britain disabled racing team. I rode to the meeting near Birmingham and met Nigel Capewell, who was the main instigator and had a serious arm injury from an accident as a police motorcyclist. A team of about 10 riders was formed and for the next four years we were funded to travel and race in the UK and Europe; that involved track and road racing.

The big one... but then a serious setback

I eventually returned to earth and continued for many years time trialling and distance riding but had a period of illness which lasted for about a year. Sensing that my days of competition were over, I sold my track and time trial bikes then decided to do a big final ride, from the farthest northern point in Scotland to my home in Lee-on-Solent, in Hampshire. The ride started on 6 June 1998 from Thurso, in the far north of Scotland.

I travelled by plane and train to the start with my bike and set out on my own, travelling 762 miles in as straight a line as possible down the backbone of Great Britain, riding for charity. It took me nine and a half days and I raised £1,100 for Leukaemia Busters, a Southampton-based charity. The only minor problem was a puncture in Stratford-upon-Avon. After that, and becoming better healthwise, I got another time trial bike and resumed racing until I was 82, when I had a slight stroke on the right side. 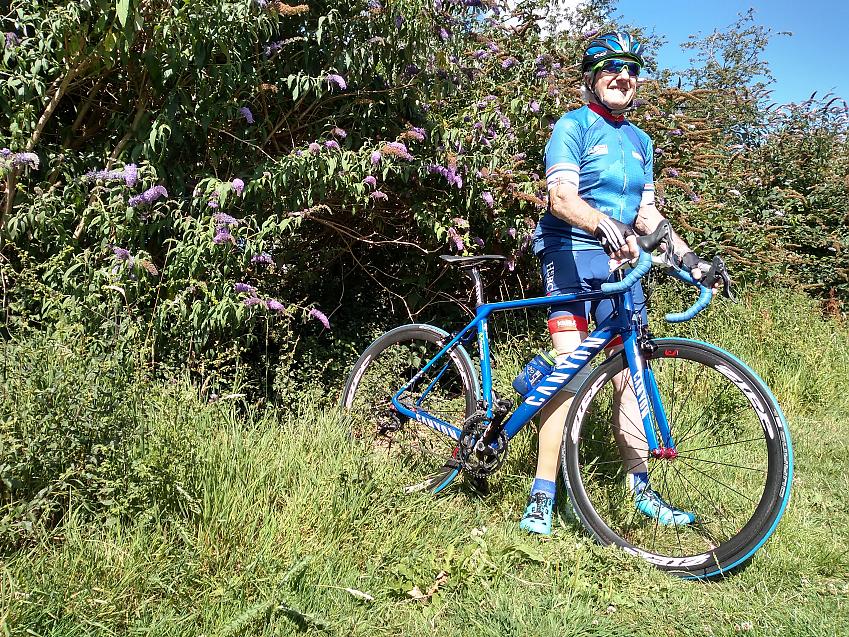 This knocked my confidence so I didn’t ride for 18 months – until a month ago that is, when I dusted down the road bike, found a quiet, mostly traffic-free route and said to myself 'Here goes, now or never!'. I took a deep breath and clipped in to my Canyon road bike, which I've had for three years, and pushed off.

I had a few wobbles but then my body clicked in and soon I was riding again! The route is approximately two and a half miles long and I have been riding it now for a short while, with only one slow tumble so far. I am feeling a lot more confident with each ride and am so proud and happy with myself. I haven't ventured on to regular roads yet, but who knows? I have now been riding two to three times a week, doing just eight miles at a time. Having been a keen rider for almost 40 years, I felt deprived of my sport so it's great to be back riding again.

I know things will never be the same but the joy of riding still kindles within me so I have rejoined Cycling UK on the Back on Your Bike scheme for only £15. As it's only for six months, I can see how I go before deciding whether or not to take out an annual membership again.

I was a Cycling UK member for many years and felt there was some protection and unity for me. I have rejoined for the same benefits and feel, as a stroke victim, I need these more than ever – although I will continue to ride solo for now as, having just got back to riding after an 18-month enforced layoff, I haven't got the speed or strength I used to have."

Along with the free  £10m third-party liability insurance and legal assistance plus the support of our 70,000 other members, Alan's Cycling UK Back on Your Bike membership will also give him:

If you've got an inspiring story to share like Alan's or if you've recently taken up cycling again, do let us know.