An army of Dr Bikes are rolling into towns around England to help fix some of the most common faults which can make cycling a potential write-off.

Cycling UK has launched its Dr Bike scheme as part of the Big Bike Revival, fixing bikes in the community for everyone, and at workplaces for employees.

Dr Bike events will be held around the country, enabling mechanics to check bikes are roadworthy and to carry out minor repairs. Where bikes need more advanced repairs, owners will be referred to retailers using the government’s £50 bike repair voucher scheme.

Cycling UK estimates that there are over 16 million unused bikes languishing in sheds and garages in the UK, many of which just require simple maintenance to start moving again, such as brake and gearing adjustments or a new saddle height.

Around 100 staff at Queen Elizabeth Hospital in Birmingham were able to access free bike-fixing sessions during their working day. The mechanic came to them with two members of Cannon Hill Cycle Club, setting up a Dr Bike clinic under a gazebo just outside the hospital’s main entrance.

The sessions were made possible through funding from the Department of Transport, which has extended its support to enable Cycling UK to focus not just on keyworkers, but to anyone whose bike is in need of repair.

The sessions took place every Friday in June between 7am and 7pm and were fully booked, demonstrating just how many health workers were opting to cycle to and from work during lockdown.

Nikki Hancock Nolan from the club, who was marking bikes and logging details for each service, said: “It was the first Dr Bike we have done at Cannon Hill, so it was a new venture for us. Cycling UK development officer for Birmingham, Vanessa Morris approached us about holding it and it went really well and was so rewarding.”

There were long days for Nikki and Mick Stanford who manned the stall throughout, though one other club member David King did assist them for a few hours at one point. “We got there just after 6am and got home at about 8.30pm. It was fairly constant throughout the four weeks and we managed to do a total of 109 bikes. We had everyone from porters to surgeons, but the workforce come from quite a wide area, so we were also trying to give some advice on route planning too.”

We had everyone from porters to surgeons, but the workforce come from quite a wide area, so we were also trying to give some advice on route planning too.

The pair saw first-hand the dedication of Birmingham’s health workers. “By the second week, public health advice had changed and we had to start wearing face masks,” she said. “It really hit home what NHS workers do, because we were in just masks and it definitely had an impact on what we were able to do and you think of anyone having to put on full PPE for their entire shift.”

The upside of the four-week stint, was that the duo got to recognise the impact their help had made in enabling people to feel safe travelling to work. Nikki said: “As we were in the same place for four weeks we would see some of the people whose bikes we had fixed coming back for their shift the next week and they brought us gifts to say thank you which was very nice.”

Nikki has been a member of the Cannon Hill club for two years and is a ride leader, having learnt to cycle as an adult.

One happy keyworker said: “I took my bike to the bike clinic outside the atrium and they are refurbing my bike for free! Such a gift, felt so privileged and lucky.”

Many more organisations in Birmingham will be running further Dr Bike sessions in the coming weeks. Among them are New Roots Bike Project in Ladywood, Birmingham - a Cycling UK affiliated club who upcycle bikes for homeless or disadvantaged people.

New Roots Bike Project previously worked with Cannon Hill Club during the first phase of the Big Bike Revival by supporting health workers, and are keen to continue doing so, as well as opening up bike checks to anyone who needs one. 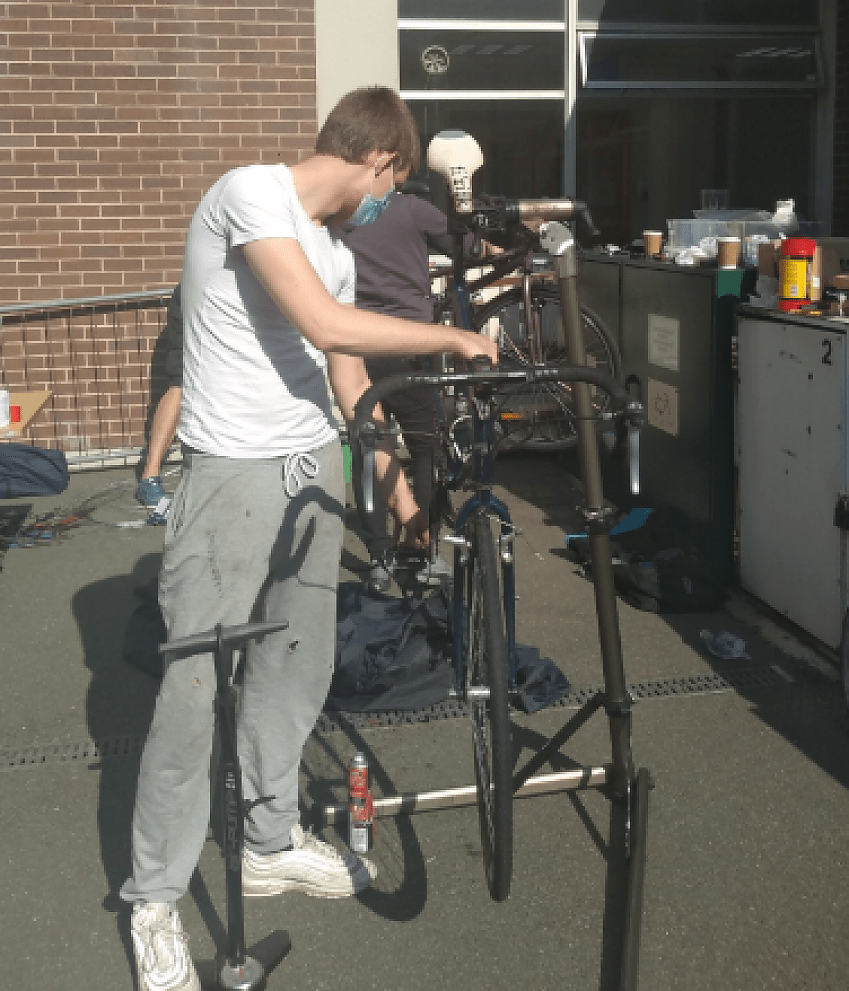 Steve Potter, is senior support worker for New Roots. Since 2017, New Roots have been providing recycled bikes and organising led rides for clients in supervised housing and hostels in the city through the Big Bike Revival.

Steve said: “We have carried on delivering Big Bike Revival all the way through this year, although the delivery model has had to change. When lockdown began, everything came to a grinding halt, We can’t use our workshop space at the moment, so we’ve been using the office car park. We’ve been fixing bikes about three days a week, first for key workers and now for anyone. We have been very busy, the phone never stops.”

As well as supporting those who have experienced homelessness, the charity also works with lots of refugees and low-income households, Steve explained. “For a lot of people, access to a bike is access to freedom. Bus fares and cars are expensive so a bike is a great way of getting around. Cycling is also very beneficial for our mental health.”

Community clubs, independent bike shops, recycling centres and social enterprises are among the partners helping Cycling UK to deliver the scheme. The next phase of applications for funding to deliver Dr Bike service in the community or at workplaces has recently opened.

If you're an Independent bike mechanic, part of a workshop team or running non-profit cycling projects, can find out more about applying.

The programme operates until the middle of January.

Find a delivery partner near you

Cycling provision is more than a proposition in Birmingham, it’s a matter of social justice View

Weekender route: Brum for beginners View
Cycling UK continues to support the UK to cycle
This remains true during this difficult period with the ongoing threat of coronavirus Covid-19
Read our latest advice on cycling