Bike friends are the best friends

Bike friends are the best friends

A two-wheeled meeting at the school gates led to a lifetime of friendship and adventure for Dilys and Lindsi.

Dilys and Lindsi have a special friendship that has lasted for more than three decades and it all started at the school gates. They were the only mums cycling to school with their children and were instantly drawn to each other.

Through various phases of their lives, from heading out together on rides, cycling with their children to school to graduation ceremonies, they’ve experienced life in all its richness thanks to their love of cycling.

Dilys was always a bit 'out-there', making her own decisions and carving her own path, without needing permission or support from anyone. In the late 70's, when she was a law student, a particular young man on a bike caught her fancy triggering Dilys to determine to master the chic simplicity of riding.

Despite never having owned a bike as a child, Dilys was not deterred and took it upon herself to learn everything she could about cycling, including how to ride. She bought a book, visited the only bike shop in her town and invested in a drop handlebar Falcon Black Diamond, a name that still thrills her nearly 50 years on.

Alone each evening after work, she took her new machine to some rough, steep grassland away from prying eyes, and successfully taught herself to cycle.

But this is no girl-meets-boy love story, this is a chronicle of female friendship and independence. Mr bike-riding-law-student never gets a second mention: once Dilys discovered the freedom and joy of riding, she was off. 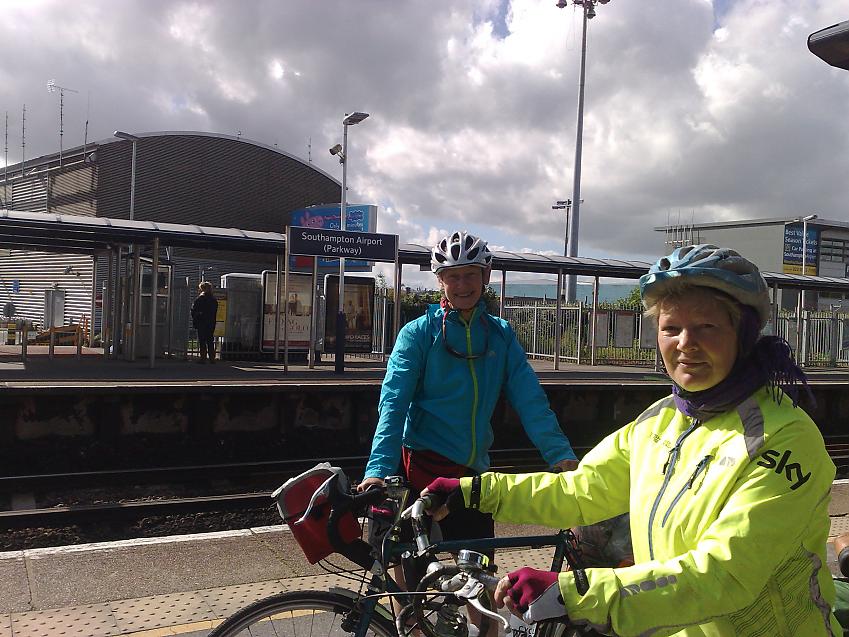 It all starts and ends here

It was rarer for women to ride to school on their bikes when they first met, so when Dilys spotted Lindsi at the school gates, the only other mum with a bike, the two instantly became friends. Their friendship blossomed in the primary school years of four of their children, during which they enjoyed trips to the swimming pool and cycling home across the common together after dark, sipping hot chocolate from flasks, with damp heads, wind-nipped cheeks and tired but happy kids.

The two women heightened their sense of mischievousness, often collecting each other's children from school to save the other from getting a telling-off from the teacher for being late again.

Far from their love of biking dwindling after these golden years, Dilys and Lindsi found a new lease of life in middle age. When the children had flown the nest, they had the freedom to take on braver and more exhilarating cycling adventures, starting with a 1,000 mile wild camping trip from Scotland´s Orkney Islands.

The women had a combined age of 120 when they set off on this three and a half week adventure that would see them bunking in abandoned caravans, sleeping in churchyards, climbing the wrong mountains and scoffing whole packets of chocolate biscuits like naughty school girls. 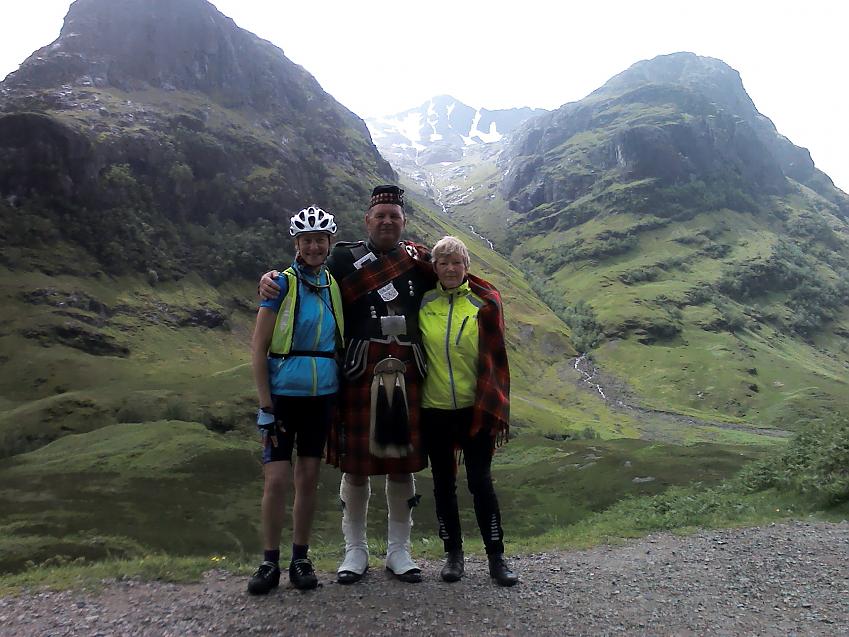 Taking in the sights at Glen Coe

Trying her upmost to be a responsible adult, Dilys tells this story of committing to be at her grown-up daughter´s ceremonial presentation at the Royal Military Academy in Surrey, which fell in the middle of the cycling trip.

“I´d booked a morning train to London from Chester with strict instructions to arrive in the best bib and tucker for 6pm. Shortly before midnight, after cycling seventy miles, we found a churchyard a few miles outside of Chester and camped there to ensure being on the morning train. Everything went to plan and, as I waved farewell to Lindsi (to return a day later and resume our trip), I mused on the only other passengers in my carriage sporting blue and while scarves.

I asked if they were having a day out and was told they were going to the match .... in Liverpool!  I had just cycled 70miles around Liverpool to Chester so alarm bells started and the guard confirmed my fears - I had not heard the platform announcement that the London train was delayed as I had already boarded it. I left the train ten miles north of where I boarded and waited an hour for another London-bound train, calling my husband with the news. We reached Sandhurst at 6pm to see our daughter in immaculate attire anxiously searching faces until she spotted me in my three days old cycling shorts smelling as though I had slept in a churchyard.  Before she could open her mouth, I stopped her with 'Don´t even say it - you have no idea what I have gone through to be here.....'

The ride from the Orkneys was to be the first of several annual adventures. The following year they took trains to Florence and Siena, cycling across the cities of Pisa, Florence, Paris and London in one 24hr period. And the trips have continued for nearly a decade.

Despite dramas and calamities, both Lindsi and Dilys agree that their husbands and children were supportive and quietly proud of their adventures. Dilys's husband even hung a map in the kitchen, pinning their locations in real-time for the whole family to follow. And their legacy has continued as they passed the cycling bug onto all seven of their children, who are now in their 30s and 40s, all of them cyclists.

Cycling has united these two women and provided many beautiful memories together, creating a friendship that can withstand the passing of time. Often, as people reach different stages of life, they find a shared bond with someone can weaken, meaning they drift apart. Dilys and Lindsi share a constant, the bicycle, and via this beautiful machine they remain connected and united, no matter where the ebbs and flows of life take them.

And whilst their story continues, this article ends with the words of Dilys as she ponders on how cycling has enriched the past 50 years of her life: “Cycling has been my life's passion, without a doubt. It has given me freedom, confidence, energy and adventure.”

Ways to encourage your friends to cycle View

Women's cycling advice View
Cycling UK continues to support the UK to cycle
This remains true during this difficult period with the ongoing threat of coronavirus Covid-19
Read our latest advice on cycling
Join Cycling UK to help us change lives and communities through cycling
Membership gives you peace of mind insurance, discounts in cycle shops, rides & routes
Join now