The offending sticker on the back of a bus
By RhiaFavero
Thursday, 26 June 2014

After months of letters sent back and forth between cycling organisations and Transport for London (TfL), a positive meeting was held this week to discuss how to improve the notorious and omnipresent ‘Cyclists Stay Back’ stickers.

The stickers were intended for vehicles with blind spots, in particular lorries weighing 3.5t and over, but they have appeared on vehicles that do not have significant blind spots like taxis, vans and buses.

CTC is concerned that the design of the stickers and displaying them on vehicles without significant blind spots is having an adverse impact on driver behaviour.

The wording ‘cyclists stay back’, which implies that it is the cyclist’s responsibility to stay behind all vehicles at all times, has led to incidents where drivers have accused cyclists of behaving contrary to the rules of the road.

Overtaking on the left side is perfectly lawful where traffic is slow-moving or stopped. If there is no chance for that traffic to turn left, then it can be the safer option. What’s more, telling cyclists not to pass on the left side of the road makes no sense, given that most cycle lanes are located there.

In a letter sent to TfL in February this year, a consortium of cycling organisations, including CTC, LCC, RoadPeace, the Road Danger Reduction Forum, the Borough Cycling Officers Group, and the Association of Bikeability Schemes, requested that TfL instruct bus, van and taxi operators to remove the signs and re-word the signs remaining on HGVs.

TfL responded by saying it would be too expensive to remove the stickers from these vehicles, but that it was willing to take a second look at the sticker design.

The cycling and road safety organisations had prepared for a confrontation with TfL at the meeting on June 25 but were pleasantly surprised at TfL’s willingness to cooperate.

These stickers were intended as a warning to cyclists of the dangers of cycling alongside large vehicles, not as a prohibition. The new design, which we expect to see in London by the end of the summer, will better reflect this message."

TfL officials acknowledged that something must be done about the many vehicles displaying the stickers unnecessarily, but said they do not have the power to order operators not party to the TfL-led Fleet Operator Recognition Scheme (FORS) to remove them.

TfL have, however, already sent instructions to all FORS members on the correct usage of the stickers and have agreed to make the instructions available on the TfL website. Anyone wanting to let an operator know the correct way to display the stickers will be able, in future, to direct them to this area of the website.

TfL also agreed to redesign the stickers following consultation with cycling organisations. The stickers will be re-issued to operators by the end of the summer, along with instructions on how to correctly display them.

The stickers will remain on buses, but with different wording to those on HGVs. The bus stickers will politely request that cyclists let a bus pull in to a bus stop rather than ordering cyclists never to pass buses on the inside. 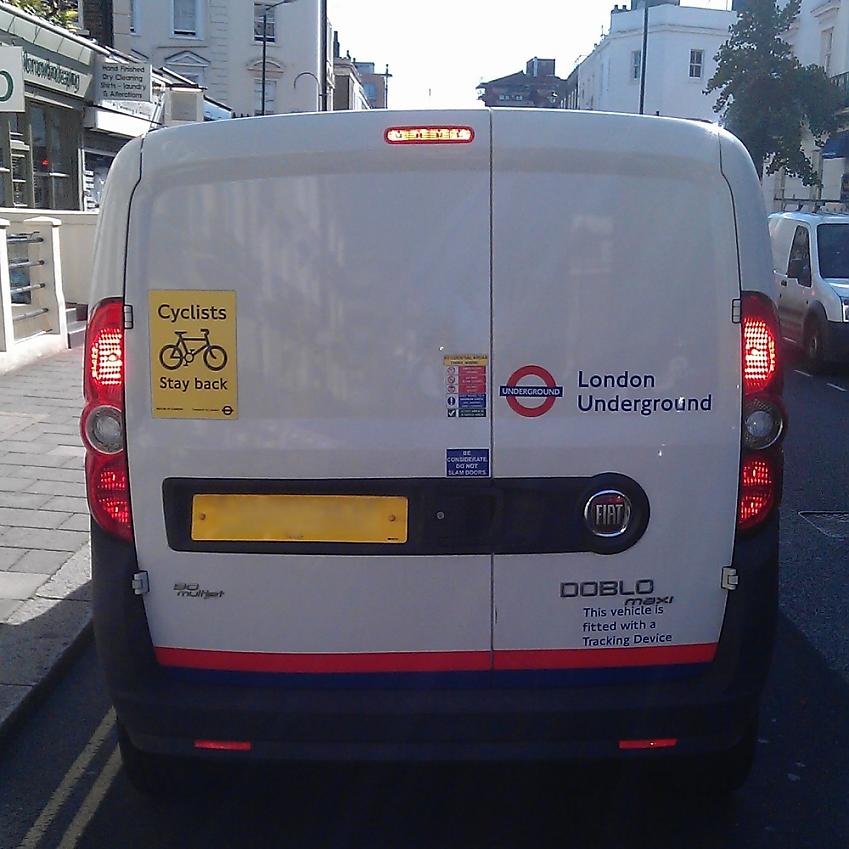 Some good news. These signs

Some good news. These signs were a bit anti-cyclist. They seemed to be blaming cyclist behaviour (undertaking stationery/slow-moving traffic) as the prime cause of cyclist injuries/deaths, instead of accepting responsibility to reduce the HGV/bus blind-spots that are not so dangerously unsafe for other road users.

Another similarly notorious sticker is the 'if you can't see my mirrors, I can't see you', again trying to pass the responsibility for safely driving a large vehicle onto other road users.

All credit to the CTC for

All credit to the CTC for helping to challenge these offensive notices. Now, what about "Cyclists Dismount"?

Ah yes, the old 'Cyclists Dismount' chestnut - see http://www.cyclestreets.net/location/11500/.
CTC has been banging on at the Department for Transport (DfT) to abolish this sign for many a year!

The good news is that, when DfT was revising the traffic signing regs in 2011 (the snappily named Traffic Signs Regulations and General Directions, TSRGD), they did agree that traffic sign 966 (or, "the sign to diagram 966", to use the correct jargon) should be amended to say "Cyclists rejoin carriageway" (see https://www.gov.uk/government/uploads/system/uploads/attachment_data/fil... para 101).

However they still retained "Cyclists Dismount" as a permitted variant for sign 966. And they certainly haven't gone so far as to tell local authorities to take down existing examples of the old 966 sign (if only! )

The frustrating thing was that the 1996 'Cycle Friendly Infrastructure' guidance did advise that this sign should be "progressively removed". But it was only guidance...

Still, the fact that it has been relegated to a permitted variant is a start. Even better news is contained in Chapter 1 of the consultation draft of Transport for London's new London Cycling Design Standards (https://consultations.tfl.gov.uk/cycling/draft-london-cycling-design-sta...). Paragraph 9 says, "Chicanes and ‘cyclist dismount’ signs must be
avoided." And paragraph 12 goes further still:

***
"The ‘Cyclists dismount’ sign is the infallible mark of a faulty cycle route. No-one wants to get off and walk. Either the sign will be disobeyed, or the route will simply not be used. If a route cannot be done without these signs, it should not be done at all."
***

Now we just need to get DfT to write something similar into some national design standards...!

In Sheffield we have

In Sheffield we have "Cyclists Give Way to Pedestrians" signs in shared use areas and I believe the council has applied for DfT approval for this sign.