The offending sticker on the back of a bus
By Roger Geffen
Friday, 9 May 2014

CTC has joined the London Cycling Campaign (LCC) and other cycling and road safety groups in reiterating our call for Transport for London (TfL) to halt the use by van, taxi and bus operators of a warning sticker telling cyclists to 'Stay Back'.

CTC and its allies have therefore send a further joint letter to TfL, clarifying some apparent misunderstandings about the nature of our concerns, and reiterating our request for a dialogue.

Evidence of the problem

Specifically, Leon Daniels's letter to CTC and its allies questions whether we have evidence that the sticker is causing adverse changes to the behaviour of lorry drivers. Our response therefore emphasises our wider concern that the mis-use of the sticker could also prompt a worsening of behaviour by drivers of vans, taxis and other vehicles which display these stickers. The design of the stickers, and the way they are being misused, is effectively making out that cyclists themselves are responsible for staying behind all vehicles in all circumstances, i.e. not just to avoid overtaking on the left hand side of lorries.

We specifically note the case of an inquest where lawyers acting for the driver pointed out that the vehicle involved had a "stay back" sign on it, implying that the deceased cyclist was therefore in some way at fault.

Since our letter was sent, CTC has also heard of a case where a cyclist was cut up (apparently deliberately) by a lorry driver who overtook rapidly before turning left across his path. When the cyclist remonstrated, the driver responded with abuse. The cyclist then called the driver's company (using the "How's my driving?" phone number on the back), only to be told: "Didn't you see the lorry's 'Stay Back' sticker?"

Why we are concerned

Our response notes that the laws in cycle-friendly countries like Denmark and the Netherlands make it clearly the driver's responsibility to look out for cyclists on their inside before turning across their path.  Moreover the Government has just announced changes to traffic rules which could result in cyclists and pedestrians travelling straight ahead at junctions having greater priority over drivers turning across their path.  This could be hugely beneficial to the safety of protected cycle tracks in the UK, as long as British drivers become accustomed to looking out for cyclists (and pedestrians) on their inside, in the same way as is normal in Denmark and the Netherlands.

By giving the opposite message, these stickers could be entirely counter-productive to the efforts of Transport for London itself, and other councils around the UK, to adopt continental design principles.  Hence the gravity of the concerns expressed by CTC and its allies.

The sticker, originally designed by TfL for the backs of lorries, has been distributed through the TfL-led 'Fleet Operator Recognition Scheme' (FORS).  CTC and the other signatories to the letter agree that 'Stay Back' is appropriate advice to cyclists when approaching a poorly designed HGV from behind on the left hand side. However, it is wrong to give drivers the impression that they are legally at fault for doing so.

In Britain, cyclists' ability to cycle safely on the inside of motor vehicles at the approach to junctions (including on segregated cycle tracks) is not supported either in law or by normal UK driver behaviour. Hence cyclists are best advised either to overtake on the outside, or to stay back.

The main objection to the 'Stay Back' message, though, is its use on small vans, buses and taxis. The drivers of those vehicles all have adequate vision of the road around them and should have no difficulty being careful around cyclists and pedestrians.

Giving drivers the impression that cyclists are at fault if they're on the inside of a motor vehicle is contrary to the changes in driver awareness and behaviour we need for people of all ages and abilities to feel they can cycle safety and conveniently, including those without the confidence to move out into the road to overtake stationary or slow-moving traffic.

Charlie Lloyd, LCC's road danger reduction campaigner said: "Many people have contacted us to say these stickers are offensive and misleading.

"Even on large HGVs the 'Stay Back' message is inappropriate. We want lorries to have a warning sign appropriate to the danger which occurs when a large vehicle turns left or right.

Overtaking on the left side is perfectly lawful where traffic is slow moving or stopped. If there is no chance for that traffic to turn left then it can be the safer option. Most cycle lanes are on the left side of the road, the Highway Code warns drivers not turn left across the path of cyclists on the left side. 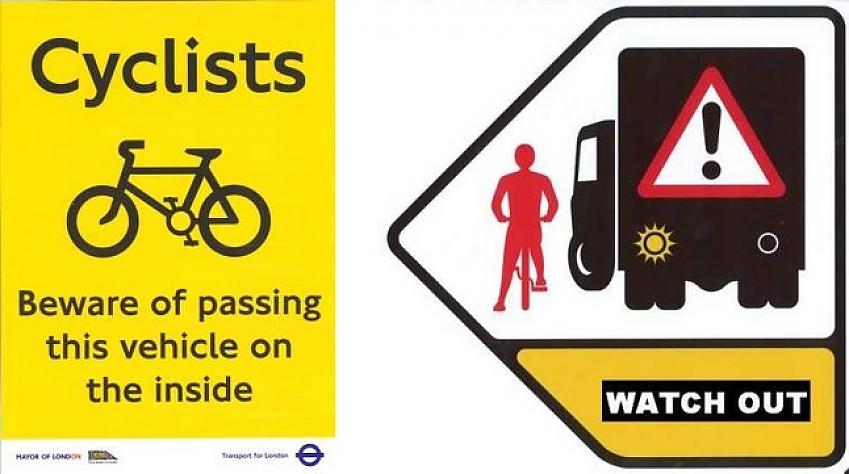 These (above) are the type of sticker we would like to see. The message is clear the danger is when large lorries are turning left. The wording on the left was agreed with LCC in 2006; the image on the right won a national design competition for an easily understood image. 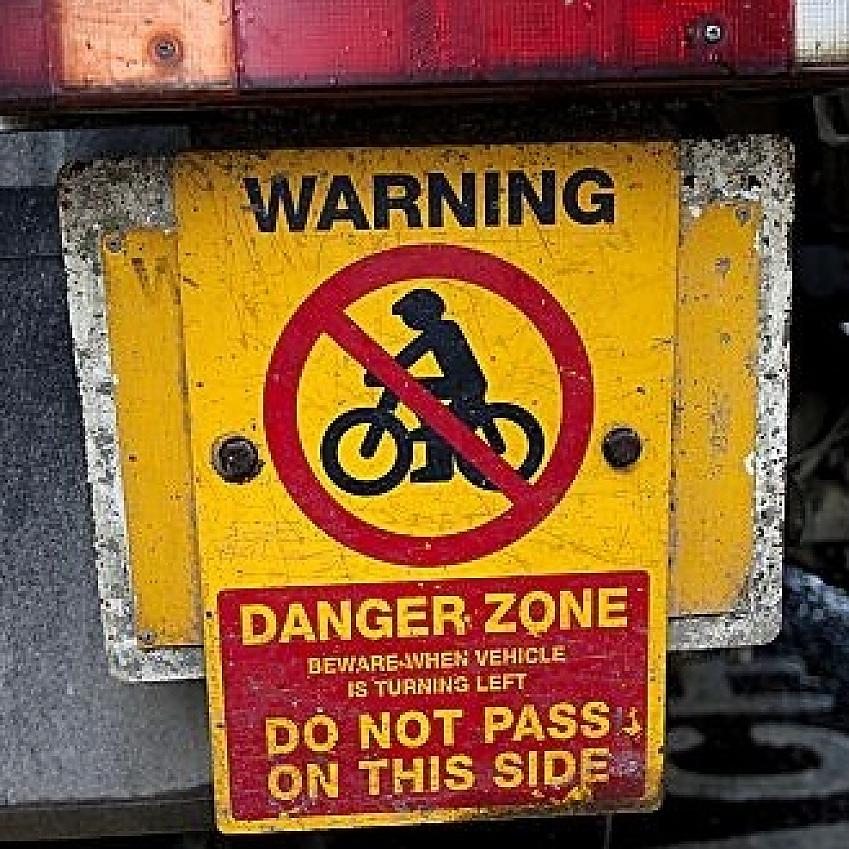 This notice gives the false impression that it is illegal to pass vehicles on the left side of the road. A driver seeing this sign many times a day will be tempted to think any cyclist on the left is a law breaker. The driver may not take as much care as he/she should.

Such a sign could lead to drivers blaming cyclists in the case of a collision even though there is a clear duty of care for motor vehicles to look out and not turn across the path of cyclists at junctions. 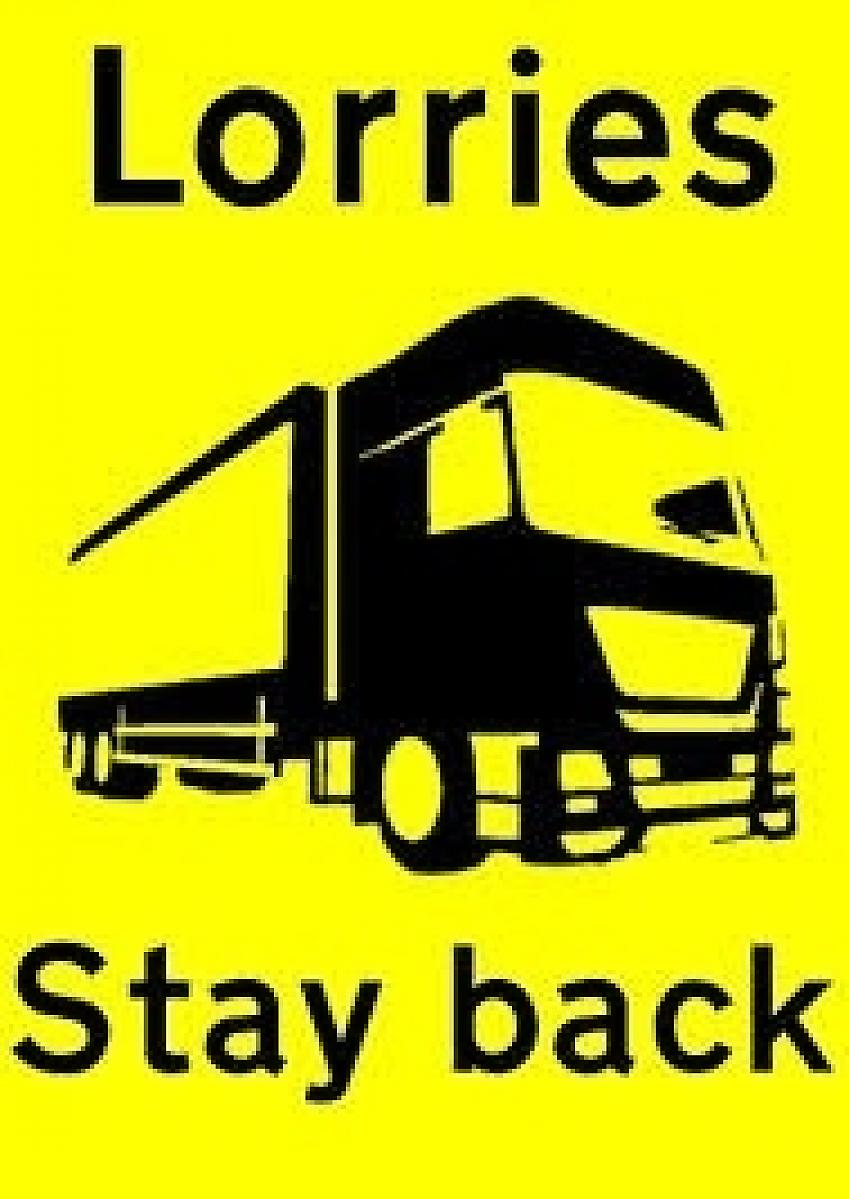 Graphic designer Riccardo Pelc has produced an alternate sticker for cyclists to wear on their backs. The image is available in A4 or A5, prices being £5 for the A5 and £8 for the A4. For information please email him at inpassion.prints@gmail.com

Initial letter from cycling and road safety groups to TfL

Whilst I am outside TfL's

Whilst I am outside TfL's region, from the various reports I have the distinct impression that TfL is working to get rid of cyclists from their streets rather than to encourage cycling. which is staggeringly dumb, particularly given the air quality problems the capital is experiencing and are soon going to cost all Uk taxpayers a lot of money as the Eu takes the UK to court over the pollution issues we have failed to act on.

We could have safer cycling and cleaner air if TfL would embrace cyclists and work towards providing better facilities and safer infrastructure. Instead if splashes blue paint of existing roads (cheap and ineffective) and prints up loads of stickers that pass yet again suggest the victim is at fault.

The worst example I've seen was on the back of a Nissan Navara or similarly styled pick-up truck; unbelievable.

Better public awareness of Highway Code rules 182 and 183 regarding turning left from a major road to minor road would help.

Turning left
182
Use your mirrors and give a left-turn signal well before you turn left. Do not overtake just before you turn left and watch out for traffic coming up on your left before you make the turn, especially if driving a large vehicle. Cyclists, motorcyclists and other road users in particular may be hidden from your view.

keep as close to the left as is safe and practicable
give way to any vehicles using a bus lane, cycle lane or tramway from either direction.