Eid by bike - celebrate the Muslim festival by donating food

Eid by bike - celebrate the Muslim festival by donating food

Most of us know all about celebrating traditional festivals such as Christmas, Easter and Father's Day but as Cycling UK's membership and volunteer network diversify, we're looking at celebratory days from other cultures and customs.

Earlier this month, we talked about the Buddhist festival of Dharma Day which took place on Sunday 5 July, the day of the full moon, and marks the beginning of Bhudda's teachings - we encouraged cyclists to visit places of quiet contemplation to mark the occasion.

Now, we are looking forward to Eid al-Adha, which is considered the holier of the two Islamic festivals of Eid, and this year begins on Friday 31 July and continues until the evening of Sunday 2 August. It will be celebrated by the UK's 2.6 million Muslims. Eid al-Adha falls on the tenth day of Dhu al-Hijjah, the twelfth month of the Islamic Hijri calendar, which is determined by the lunar cycle so moves forward every year to coincide with when the new moon is first visible, making it hard to predict in the Gregorian calendar.

The first festival, Eid al-Fitr, took place on 23-34 May and marked the end of Ramadan, the Muslim season of fasting. Eid al-Adha on the other hand marks the occasion when the prophet Ibrahim (known to Christians as Abraham) offered his son in sacrifice to God before Allah provided a lamb to be sacrificed in his place instead. Traditionally, an animal is sacrificed and divided between the poor and immediate family and relations. Some people give money instead to charity to enable poorer families to enjoy a feast. There is also often an exchange of gifts and food is shared between family and friends.

How will it be celebrated?

With many coronavirus restrictions still in place, we asked some of our Muslim cycling groups how they were planning to celebrate Eid al-Adha this year.

Dr Anas Rana of Cycling UK affiliated group Ahmadiyya Cycling Club (ACC) says they are planning to deliver food prepared by the Muslim community at mosques in East London and Morden in South London by bike to the homeless in the middle of Eid on Saturday 1 August. The club is an off-shoot of charity the Ahmadiyya Muslim Youth Association UK (AMYA), the largest Muslim youth group in the UK, and Anas, a cancer researcher by profession, is the volunteer director of its department for Charities and Welfare. ACC regularly organises long distance rides such as Glasgow and Paris to London with and for charitable causes such as the British Heart Foundation, Cancer Research UK and Humanity First. It was founded in 2014 andis aimed at Muslim men and boys aged between 15 and 40. 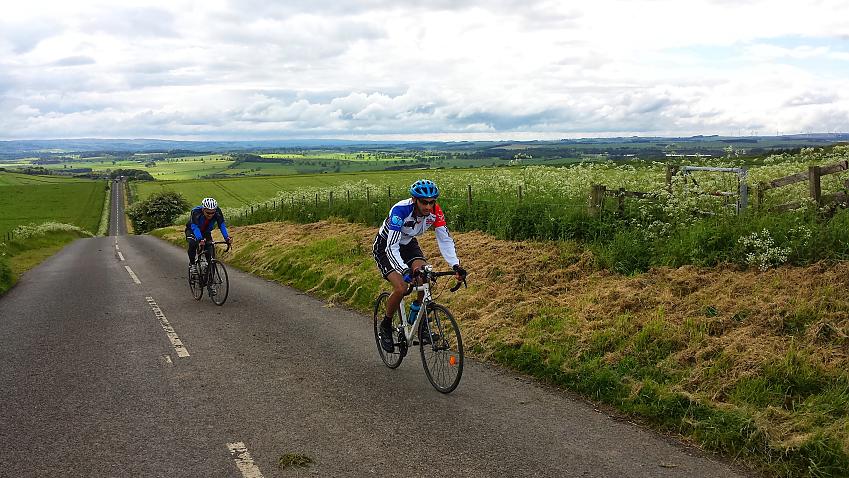 Anas says there is a lot of enthusiasm amongst the community for cycling, so much so that there are now three different groups riding regularly and catering for different sectors, including a women’s group and one for the elderly.

Ahmadiyya Cycling Club has around 30-40 members turning out for regular group rides and they are mainly based in and around London and the Surrey Hills. While the focus is mainly on road riding, some of the group also enjoy mountain biking. Although mostly a social cycling club, the spirit can be competitive, with riders pitting themselves against each other on the iconic Box Hill Zig Zag climb!

Every year, a group of around ten cyclists also makes its way by bike to the faith's base in Farnham in Surrey from their branch in Frankfurt. Follow their exploits on Twitter @AhmadiCyclingC and on Instagram at ahmadicyclingclub.

'Love for All Hatred for None'

As part of its commitment to integration and helping others, AMYA has a long history of raising large sums of money for British charities. The organisation lives by the motto 'Love For All Hatred For None'; its purpose is to revive the 'true Islamic values' of Loyalty, Freedom, Equality, Respect and Peace by breaking down barriers and building trust, thereby enabling a better understanding of Islamic beliefs and their role in modern life.

Founded in India in 1889, and established in the UK since 1913, the Ahmadiyya Muslim community built London's first mosque in Putney in 1926 and now has 100 branches across the UK, including the Baitul Futuh mosque in south London, the largest in Western Europe. The aim is to serve humanity while upholding the tenets of Islam in a peaceful and charitable way. 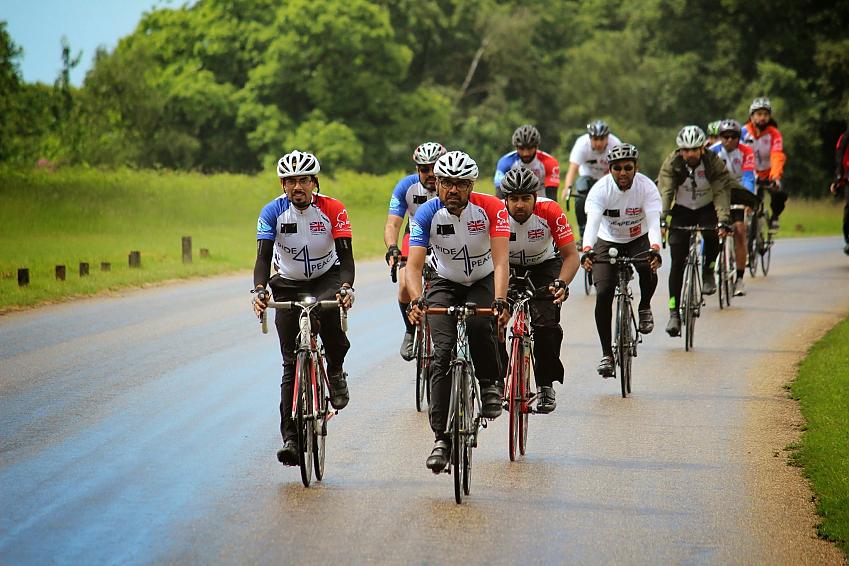 This Eid, the focus for AMYA will be on supporting the pandemic effort by distributing food and essential hampers to the homeless and key workers in major cities across Britain. Rather than gathering together at mosques to pray and share food, as would be the norm, Ahmadiyya Muslim communities will be tasked with distributing aid to the needy. So far this year already, AMYA has helped 13,390 households, 24 charities and food banks, 21 local councils and delivered 205,228 items of PPE on behalf of the government to NHS staff. Additionally, in 2019-2020 it has also donated 7,700kg of food and 4,100kg of clothes, made 4,000 welfare visits, donated 750 units of blood, planted 37,000 trees and done much more besides. 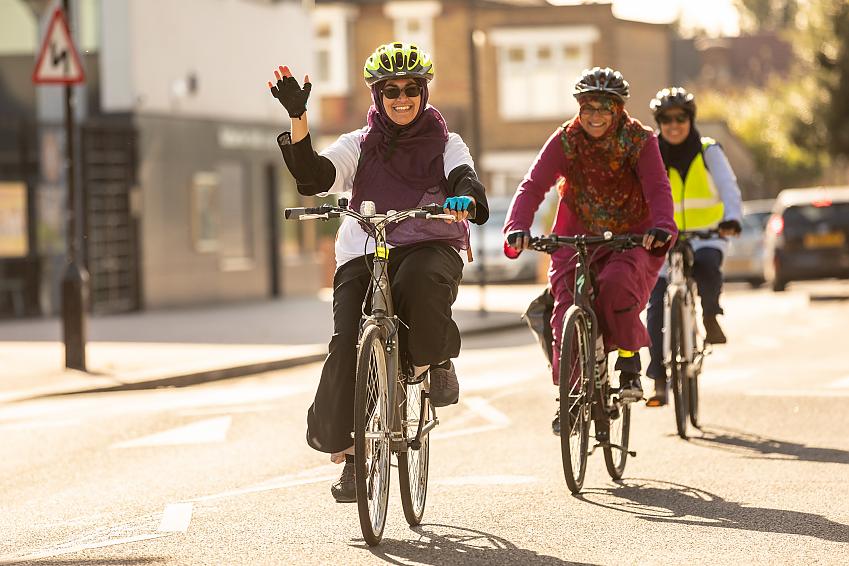 Cycle Sisters have been supporting each other during the pandemic. Photo by Jenna Selby Waltham Forest Council

Meanwhile, another Cycling UK affiliated group, Cycle Sisters, which is aimed primarily at Muslim women, will not be doing anything specific for Eid al-Adha this year due to the season falling in the school holidays, when many of its riders would be unable to meet up anyway. However, usually over Eid their WhatsApp group is very active and sends each other Eid greetings and prayers. Some of the group might also do family rides, and last year, the group's found Sarah Javaid delivered all her family Eid presents by bike. And one year rider Nailla Majid received a bike as an Eid present from her husband!

Cycle Sisters have also been supporting each other through the pandemic with bike buddies, Zoom calls, a Destination of the Week and lots of tips on their own YouTube channel.

Cycle Sisters trustee Emma Pajarillaga, who was included in Cycling UK’s 100 Women in Cycling list last year, is the lead for Good Deeds on Bikes, part of the Walthamstow-based Hornbeam Café and Centre. They are not doing anything specific for Eid but have, however, been doing some fantastic work to get shopping and hot food by bike to people isolating at home since the start of lockdown, on top of their food rescue work.

Why not celebrate Eid al-Adha this year too by making a food delivery by bike to a homeless charity, local foodbank or someone in need then share your photos and stories with Cycling UK using #eidbybike? If there is nothing suitable local to you, perhaps have a socially distanced picnic ride with your group, friends or family instead?

If you are a volunteer registered with Cycling UK's, you can find it as a task on our volunteer platform Assemble.

Cycling in Surrey View
You too can champion cycling in the UK
Give your support today to help Cycling UK’s charitable work tomorrow. We double every pound you give through other sources to help change lives and communities through cycling.
Volunteer now
Cycling UK continues to support the UK to cycle
This remains true during this difficult period with the ongoing threat of coronavirus Covid-19
Read our latest advice on cycling