St Albans cycle campaigners Tom Spaven and Doug Nevell have been rewarded for their outstanding work with Cycling UK Certificates of Merit.

The awards were presented by Julian Daly, cyclist and Leader of St Albans City and District Council, at the Cyclenation-Cycling UK Campaigners Conference in St Albans.

Tom Spaven was a founder member of the St Albans Cycle Campaign in 1998 and membership secretary for many years. His extensive knowledge of local cycling and cyclists has been highly appreciated by the cycle campaign members and the wider community in St Albans City and district.

Doug Nevell has been an inspiration to many local cyclists and ride leaders, as well as an influential cycle campaigner. He has been a major contributor to the St Albans Cycle Campaign (STACC), particularly in liaising on access issues and in campaigning on cycle parking in new developments.

Both Tom and Doug were extremely moved to have been nominated for the Cycling UK awards and were delighted to be presented with them at the conference – which was held as part of Sustainable St Albans Week and attended by over 100 cycling campaigners, planners, local authorities and representatives of other cycling groups.

Rona Wightman, STACC Secretary and South Herts CTC ride leader, said: “I am so glad we nominated Tom and Doug. They have been such a big influence and inspiration in local cycle touring and campaigning, and it was so good to let them see how much they are admired and appreciated. They are both very modest, but it has meant a lot to them.”

In addition to being a founder member of STACC 18 years ago, Tom became membership secretary – a role he only retired from fairly recently. His caring attitude and attention to detail were major assets to the growing campaign group.

Tom and Doug have been such a big influence and inspiration in local cycle touring and campaigning, and it was so good to let them see how much they are admired and appreciated. They are both very modest, but it has meant a lot to them.”

One of his unique touches was to obtain copies of the Department of Transport Highway Code for Young People booklet and see that younger members received a copy on their sixth birthday.

Tom is very practical – his involvement with a local school’s Bike Day turned into a complete refurbishment of the bicycle obstacle course apparatus. He created a display system for events that can be transported by bicycle and also invented the ‘dangle board’ which brings cycle campaign publicity to city centre cycle parking.

His award citation read: “Tom seems to know everyone in cycling across all sectors, which has undoubtedly been a factor in the willingness of local clubs and cycling groups to work together and support each other with mutual respect.”

Doug is an exceptional ride leader, and a stalwart campaigner for cycling and the environment.

He stepped down from the STACC committee in 2014, earning this tribute from the group’s chair, John Metcalf: “Doug’s work on planning applications, ride leadership, encyclopaedic knowledge of the local highways, byways and back-doubles, and his thoughtful contributions to many meetings have greatly advanced cycling and cycle campaigning in the district.”

Doug (pictured below receiving his award) introduced many people to the delights of cycling and the countryside around them and is held in high esteem by other ride leaders who have learnt routes and ride management from riding with him.

Local riders Derek and Audrey Pawsey, members of the St Albans Forty Plus Group, got to know Doug really well when joining one of his legendary ‘M25’ rides – a week-long tour in a big loop around London using hidden lanes and magical back routes.

They said: “Eyebrows are still raised when we mention to friends and acquaintances that we have cycled round the M25! The route had been planned down to the minutest detail and took us along lanes and tracks we would never have known existed.

“Doug had arranged for us to cross the Thames by the Tilbury Ferry, but when we got there we discovered that one of the two boats was out of action and the other had sunk that morning! The replacement bus service refused to take our bikes – especially our tandem – and so, resourceful as ever, Doug had soon organised a van to transport us over to Tilbury.

“Unfortunately the van couldn’t take all of the riders, so most of us had to go via the replacement bus service – which turned out to be using scheduled bus services complete with changes. However, we did just manage to get to our B&B before nightfall. What an experience!” 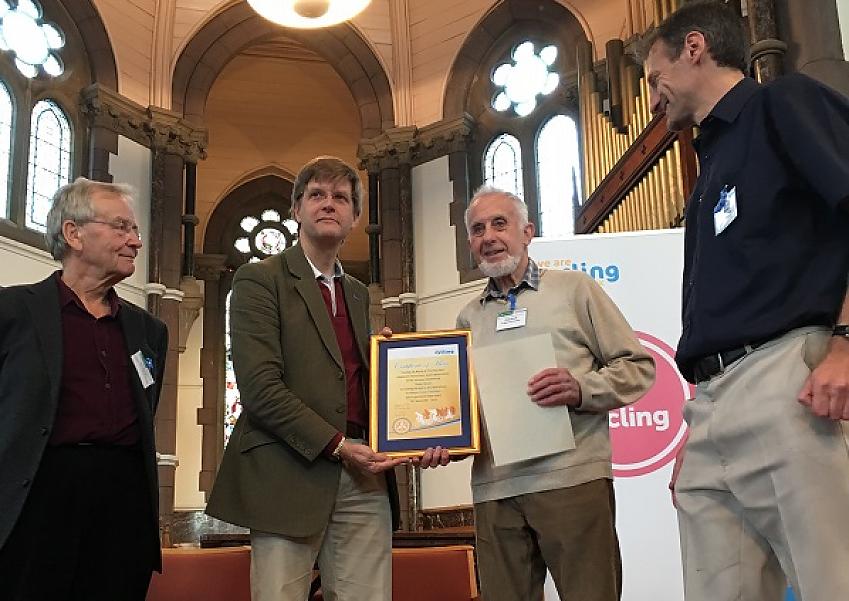