Surprise cycling trip opens up a world of joy for Bob

Bob Blackman and his brother John get pedalling thanks to Alice Holt Inclusive Cycling
By Tony Upfold
Tuesday, 4 October 2016

Surprise cycling trip opens up a world of joy for Bob

A 70-year-old Surrey man who has been registered blind since birth realised a lifetime’s dream when he went cycling for the first time – thanks to a surprise trip organised by his elder brother.

Bob Blackman was taken by brother John to Alice Holt Inclusive Cycling, a centre run by volunteers who are members of Cycling UK.

The pair pedalled a specially-adapted trike around a hilly, wooded three-mile circuit, with Bob sitting at the front holding on to a fixed handlebar and John steering behind.

Bob, who lives in nearby Wrecclesham, just outside Farnham, had been to Alice Holt Forest with his family before and imagined how nice it would be to join his grandchildren as they enjoyed themselves on their bikes.

But he had no idea such a thought could become a real possibility thanks to Alice Holt Inclusive Cycling, a centre which is affiliated to Cycling UK and works for the benefit of people with disabilities who wish to enjoy cycling in a safe environment.

Bob said: “My brother John is full of surprises. I happened to mention to him that I would love to do a cycle ride through the glades and he made my dream come true.

“I thought the best that could happen was sitting on the back of a tandem. But John did some research and spoke to the volunteers at Alice Holt Inclusive Cycling, who came up with the perfect cycle for me to ride.

“I have a tiny bit of vision, but very little – and nothing in sunshine. But sitting at the front of the trike I had the feeling of actually cycling for myself. I could feel the breeze in my face, had the sensation of tipping as we went round corners, could tell when we were going past trees.

“I admit I felt like a big kid. I even shouted ‘wheeee!’ as we went downhill at the start of the ride. It was absolutely fantastic.”

Sitting at the front of the trike I had the feeling of actually cycling for myself. I could feel the breeze in my face, had the sensation of tipping as we went round corners, could tell when we were going past trees. It was absolutely fantastic.”

John (74), who lives in Alton, Hampshire, said: “I’ve been out to Alice Holt cycling with my grandson before and told my brother. He said how much he loved the idea of riding through the forest but had never had the chance, so I thought I’d arrange a surprise visit.

“I picked up Bob from his house in the morning. He had no idea what we were going to do. He has been to Alice Holt before but it was always with his grandchildren riding around on their bikes, while he just waited around.

“This time he was able to cycle for himself for the first time and he loved it. The three-mile circuit was good exercise – we even had to get off and push the trike up one hill, so I’m glad we were both able to pedal!”

Bob now intends to do more cycling at Alice Holt with his son-in-law Rob Warren, daughter Maria and grandchildren Sam (12), Aaron (11) and James (8).

He added: “I always had a dream of going out cycling in the glades with my family – and now I can. It has opened up a world of joy for me.”

Alice Holt Inclusive Cycling runs sessions every Thursday morning all year round, with 16 adapted cycles that can cater for a vast range of disabilities, as well as a dozen two-wheelers for use by carers and some clients.

John said: “I must thank the Cycling UK volunteers who run the centre. They give up their time to help others and do a truly marvellous job, allowing people to do things they couldn’t otherwise do and make their dreams come true.”

Peter, who lives in Farnham, said: “Bob was utterly exhilarated after his ride and that’s the kind of reaction which makes this job so rewarding every week.

“The beauty of cycling is that it’s truly a multi-disability sport. The Alice Holt fleet has a wide range of adapted cycles to make cycling accessible to everyone.”

“As an organisation we have been promoting cycling and protecting cyclists for 138 years. The only surprise is that it took until 2012 before we became a charity when you consider how cycling can be a life-changing force for good to so many individuals and communities, and it is our work the length and breadth of the UK that encourages and enables people like Bob to discover those benefits. We call it the gift of cycling.

“Cycling UK’s inclusive cycling network is all about creating awareness of cycling as a great way to get about and to keep fit, no matter what age you are, your cycling ability or any other challenges you face.”

Alice Holt Inclusive Cycling sessions take place every Thursday from 9.30am-12.30pm. The cost is £2.50 per session, with carers riding for free. Peter and his team can also arrange, by prior appointment, special days or events for groups or charities who wish to have exclusive use of the fleet of adapted bikes. 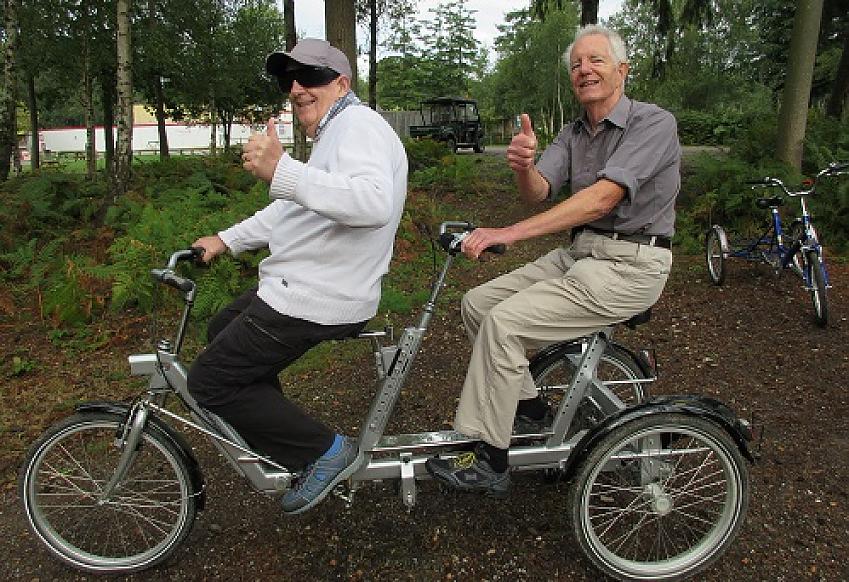 Peter Jeans - Winner View
Cycling UK continues to support the UK to cycle
This remains true during this difficult period with the ongoing threat of coronavirus Covid-19
Read our latest advice on cycling
Join Cycling UK to help us change lives and communities through cycling
Membership gives you peace of mind insurance, discounts in cycle shops, rides & routes
Join now