Penny Coombe is an archaeologist who cycled along the Hadrian's Wall cycle route, as part of her plan to circumnavigate the edges of the Roman Empire by bike.

Not many days start with a mug of coffee made on the camping stove, a peanut chocolate bar and the odd scone, but they usually turn out pretty well – or at least well fuelled! So began the final day of my cycle along Hadrian’s Wall. In 2016, I had decided to circumnavigate the edges of the Roman Empire by bike with a trip from the Dutch coast to Vienna along the Rhine and Danube, so this section along Hadrian's Wall would see me across what formed the northern boundary of the Roman world in the UK for a couple of centuries.

As the morning sun evaporated the last of the night’s rain from my tent, I felt excited for the day’s cycling, but also increasingly like I did not want the trip to end. Over the previous few days, I had pedalled from Arbeia Roman fort at South Shields, through Newcastle, past the stonework of the Wall itself and several Roman forts and milecastles, to Carlisle.

After a short train ride to the southern tip of the route at Ravenglass, I had made my way north along the Cumbrian coast to join a small team undertaking archaeological fieldwork at Beckfoot. Finally, there I was, drying off the tent in the morning sun, before the last leg to Carlisle again, to finish my slightly circuitous route.

My circumnavigation of the former edge of the Empire started primarily as a way of visiting Roman sites sequentially within their geographic contexts.

As well as being an avid cyclist, I am an archaeology PhD student, working on a thesis about Roman sculpture in Britain and Germany. Interested in cultural boundaries, my circumnavigation of the former edge of the Empire started primarily as a way of visiting Roman sites sequentially within their geographic contexts.

A secondary research objective emerged in the course of the Rhine/Danube ride: that of appreciating modern cultural change across a large area through sampling delicious, regional baked goods, from northern Dutch apple cake, to the ‘Donauwelle’ incorporating cherries from the German Black Forest, and apricot-heavy treats in the Austrian Wachau.

As the biographer of Emperor Hadrian wrote, he ‘was the first to build a wall, 80 miles long, to separate the Romans from the barbarians.’ The purpose of Hadrian’s Wall has long been debated by archaeologists and historians: was it purely defensive, packed with troops at mile intervals, to protect the Roman world from raids by tribes to the north? A statement of dominance by an imperial power? A functional boundary at which taxes were levied? A mixture of all of these and more? As I panted up to the highest point of the route near Haltwhistle, and the sudden sharp hill near Vindolanda, such questions took my mind off the gradient, though few answers were forthcoming. 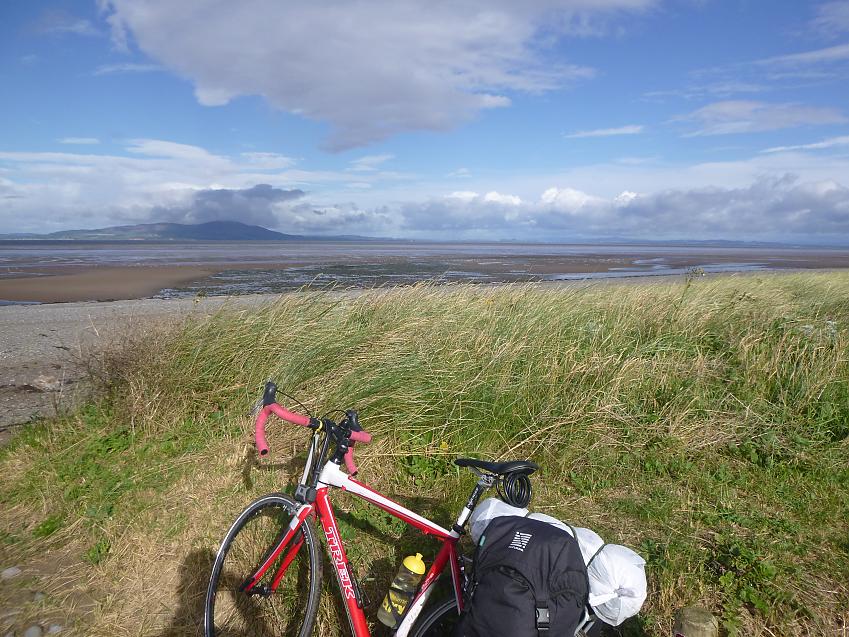 Unlike the Hadrian’s Wall walking path, which is right next to the masonry in many places, the cycle route runs about a mile to the south, and of course is longer than the Wall itself since it also includes a stretch of the Cumbrian coast. This, however, brings a cyclist alongside hedgerows plump with seasonal blackberries and past major Roman sites like Vindolanda, famous for the fantastic preservation of organic archaeological artefacts such as shoes, and only a short way from the forts of Housesteads, Chesters, and Birdoswald, and the Roman town of Corbridge.

The ancient structures exist in many places well above knee high, and the interpretations and museums bring the remains to life. At Vindolanda, I loved reading a slender Roman writing tablet made of wood, on which a soldier had asked his commander for a weekend off to go and have fun at Corbridge.

In the crypt of Hexham Abbey, it was fun to spot Roman inscriptions or carvings, reused, sometimes upside down, in building the Christian church. 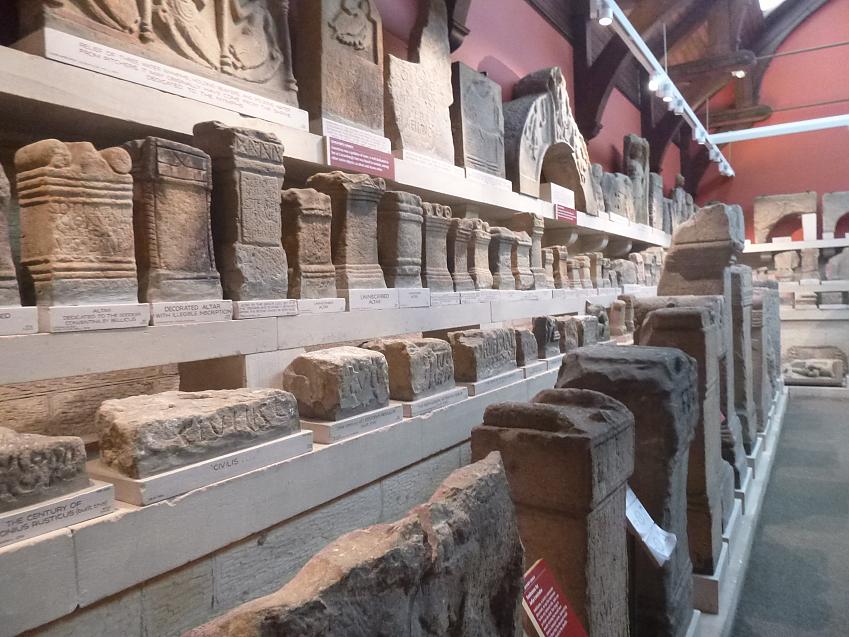 While the finds of jewellery and tombstones of women, emphasised the family communities that grew up around these predominantly military outposts. One of the most interesting and finely carved of these stones was found at Arbeia fort, in South Shields. It shows a woman carved in a style more commonly seen in Syria, and records her husband’s despair at her death. She was called Regina, and was from a tribe native to modern Essex; but he came from Palmyra and lamented her passing both in Latin and in his native language on the memorial.

The Northumberland and Cumbrian countryside were also stars of the ride: blustery Whitehaven, where the dark waves were white-crested; purple storm clouds over the Lake District inland and at Allonby; verdant back routes out of Newcastle and along the railway by the North Tyne; and the glorious, silvery, shimmering flats of the RSPB reserve by the Solway Firth.

That final day saw me relish the open skies of Cumbria one last time, before rolling again into Carlisle. The next leg of my lap of the Empire will be slightly further afield, starting in Vienna and heading to the Black Sea. 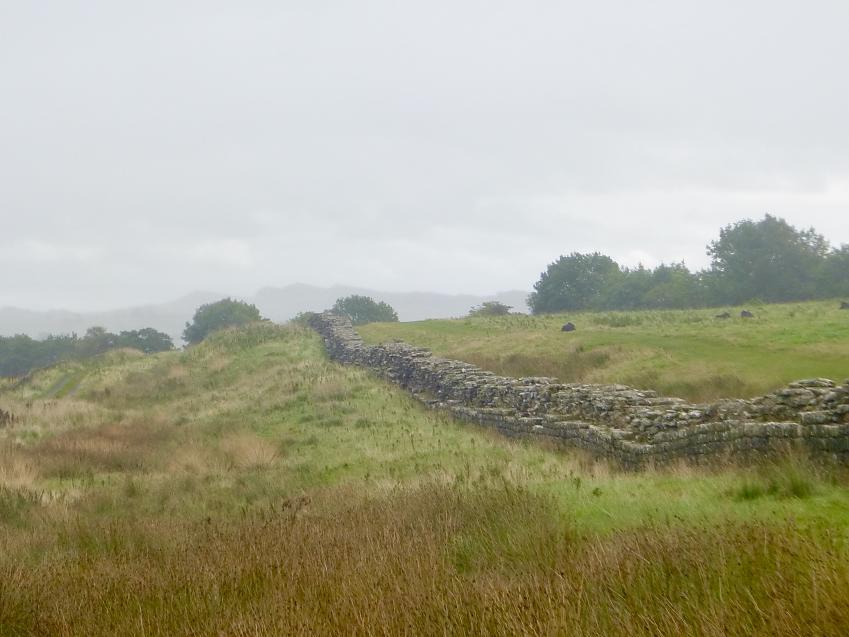 Distance: total 174 miles or 280km; c. 35 miles or 55km per day with lots of stops, and some archaeological fieldwork in the middle.

Route: Easy and signposted, following the Hadrian’s Cycleway, National Cycle Route no.72, from Arbeia Roman fort and Museum at South Shields to the Roman bath house at Ravenglass. The city centre of Newcastle gives way to rolling hills by Hadrian’s Wall itself, and on to the flat, coastal views from Cumbria towards the Isle of Man and Scotland.

Conditions: In September, the weather was a mixture of rain showers and sunny spells. Tarmac roads made the cycling straightforward.

Accommodation: A combination of camping, self-catering, and hotels.

I’m glad I had… My waterproof jacket, a good flask for coffee to warm up while wandering around Roman sites, and a small jar for collecting hedgerow blackberries!

History enthusiasts will love this route, though there is something for everyone.

At Vindolanda, Roman archaeological treasures are pulled from the water-logged conditions during excavations each summer and displayed in the site museum.

Roman forts and milecastles all along the UNESCO World Heritage Site of Hadrian’s Wall give a taste of military life. Arbeia Roman Fort is worth a stop, while Corbridge town was the place for soldiers to take time off.

The market towns of Hexham and Carlisle are also packed with medieval history (and great tea and cake stops!), while Haltwhistle is famous for being at the geographic centre of Britain.

The evocative ruins of Lanercost Priory bear witness to protracted battles between the Scots and the English, and all around is Border Reiver country. To the west, the coast of the Solway Firth is an Area of Outstanding Natural Beauty and RSPB reserve, while the hills of the Lake District form an impressive backdrop inland.

Great Rides: Natalie Wilson's 5000 mile coastal ride around Great Britain View
Cycling UK continues to support the UK to cycle
This remains true during this difficult period with the ongoing threat of coronavirus Covid-19
Read our latest advice on cycling