The original AGM planned for November 2020 had been postponed due to the Covid pandemic.

Current Secretary Chris Cooper agreed to chair the meeting in Phil Bridger’s absence. The most important tasks for the meeting were to elect a new committee and to approve the Treasurers Report in order that this could be returned to CUK by the deadline in May. Chris proposed we eschew the standard format and go straight to these items first. There was general agreement with this.

The current committee have mostly decided to stand down from their posts.

Thanks were offered to all the current serving members of the committee for their work over the past few years.

The minutes were unanimously approved.

Andy Cox presented the Treasurers Report for the period 1/10/2019 to 31/03/2021. Andy explained that CUK have changed the year end for reporting to be in line with the financial year.

The Club has a small surplus. Overheads for the Club are minimal. These usually entail hire of a hall for the AGM but his had been cancelled due to the pandemic. There is also annual payment for a five year lease on the Club’s website domain name. There was discussion regarding the website. The Club is now using the CUK website to host its member group page and this has proved successful with no cost to the club. It was generally agreed that we allow the current domain name to lapse at the end of the five year period.

It was raised as to whether there was any requirement for the Club to keep a surplus. Andy explained that there is not.

There is an amount of money which was paid to the club by CUK to facilitate a First Responder training course about what to do at accidents. Unfortunately, this had had to be cancelled due the Covid pandemic. CUK have stated that the club can continue to hold this money for future use for a similar event. There was general agreement amongst all present that we like to put this event on again when possible.

The financial report is due to be returned to CUK by 14/5/21. Miles Goff and Andy Cox will collaborate on this as part of handing over the Treasurer’s role.

It was proposed that the Club bank account signatories be changed to reflect the changes in the committee members. The new signatories should be the Treasurer, Miles Goff; the chair, Pauline Smith & the Secretary, Peter Herron. This was unanimously agreed.

Chris Cooper explained that there was no requirement for a report to be submitted to CUK so he gave a brief overview of the period since our last AGM in November 2019.

There had been the tragic accident of Richard Bland on 18/12/2019 during a group ride. This had been very traumatic for those present. No one in the group was aware of any physical contact between Richard and another rider immediately before he fell from his cycle and so it is not clear what caused the accident. He very sadly died a few days later in hospital. There had been good attendance at his funeral. He was a very experienced rider with a lifelong involvement in cycling in many clubs.

In response to this tragic event the Club had organised a First Responder training event which was due to happen in March 2020 but had unfortunately had to be cancelled due to Covid. It is hoped to revisit holding this event in the future.

Last year there had been 50 club rides before the pandemic prevented any more. There were a further 12 rides when the lock down eased, held in ‘bubbles’ of six people. Over all 81 different individuals had ridden with the club.

Club rides are due to resume on 17 May 21 after a long absence, to coincide with the Government’s easing of restrictions which will allow indoor use of cafes.

Guidelines had been drawn up for ride etiquette which were thought to be important for safety and useful to explain to new members.

Chris discussed Peterborough Cycle Forum which is regularly attend by himself, Andy Cox, Richard Donoyou and Paula Fye. The Forum had had input into several issues that would affect the Club. These included the dualling of the A47 between Sutton and Wansford, which the Forum is lobbying for good cycle infrastructure which would finally provide safe cycle access across the A1 to Wansford. The Forum had also lobbied hard to get improvements to the road scheme at Alwalton, which is used on many Club rides. Unfortunately, they had failed to get good infrastructure on this scheme which has significantly made things more dangerous for cyclists. They had successfully lobbied for improvement of the cycle path link between Orton Goldhay and Forli Strada. This is currently in progress. This is now regularly used on Club rides.

Chris informed the meeting that Peterborough City Council has adopted the national LTN 1/20 Cycle Infrastructure and Design guidance following proposal by Councillor Nicola Day. This is the definitive guide to best practice in cycle infrastructure and if the Council do follow it properly it bodes well for the future.

Thanks were given to the outgoing committee for all their work.

The First Responders course was discussed. There was general agreement that this would be run when possible. As discussed in the Treasurer's Report there is money in Club account to fund this event. 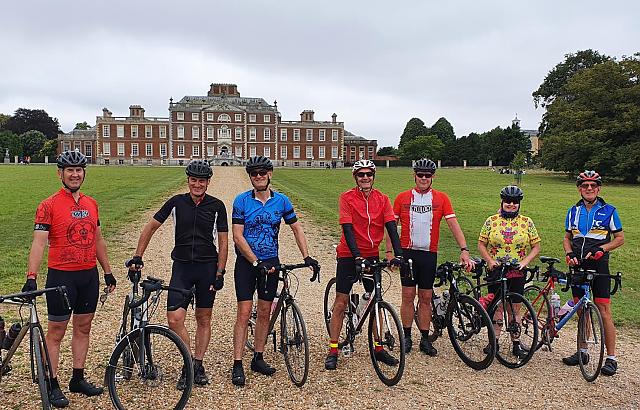