You can join the club at https://www.centcols.org/en
By Anonymous
Tuesday, 3 November 2020

Prior to lockdown, Jeremy Chandler spent a week with the Club des Cent Cols on the mountainous Isle of Beauty.

As its name suggests, the Club des Cent Cols is a French cycling club for those who love the romance of the high peaks. To join as a full member, you must have climbed at least 100 mountain passes (‘cent cols’). I signed up a for a week’s holiday with the club with some trepidation. Would I be able to keep up with those wiry Frenchmen and women on Corsica’s 10% slopes? And would I be able to understand a word that was going on?

I needn’t have worried. There were wonderful days of riding, for the most part in perfect cycling weather. Most days we cycled in small groups, through groves of olives, vines and orange trees. On the climbs, there was a constant fragrance  from the Corsican maquis: lavender; sweet smelling cistus; and the slightly curry-like perfume of immortelle flowers. 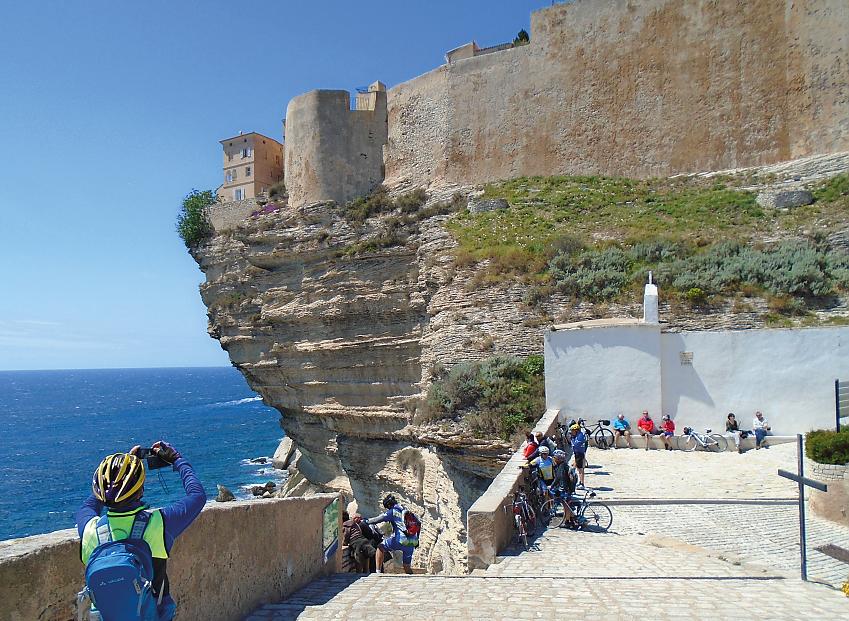 Of course, there were some bad moments too. On the second day I had a silly fall on the flat: a moment’s inattention, one hand off the bars, some gravel under the front wheel, and down I went. I received lots of tender attention from the  other club members.

Two days later, we had a monster of a day crossing the Col de Bavella, which is one of the most celebrated in Corsica. On the descent we were buffeted by icy winds, which sent the bike ricocheting across the road. I have rarely, if ever, felt so cold.

For the most part, however, it was blissful. There were amazing landscapes with villages perched impossibly over the valleys, some spectacular descents from the high hills down to the sea, and convivial company from the other CCC members, both on the rides and in the evenings.