For Cycle magazine's April/May issue, Rob Ainsley spoke to some of those empowered by pedalling and the Cycling UK groups and members who helped get them there.

We’d probably all say cycling has changed our life. The first taste of independence going to school. The big tour that opened our eyes to the world. Or maybe rediscovering leisure cycling as an adult, and the pleasure of club or social rides. But for some people, the changes go beyond that. It’s given them their life back, they say. Whether their challenges were physical, mental, economic, cultural or social, they’ve been empowered to cope with them thanks to getting on a bike.

Ross Brogan is an example. Last year he was working in Inverness in the hospitality industry but, living several miles outside the city, found transport a struggle. A car was beyond his budget, while travelling home long after the buses stopped running involved a £10 taxi fare – a significant chunk of his earnings.

Getting a hybrid from the local bike shop not only solved his transport problems but brought benefits for his family too. “I started cycling to the shops,” he says, where the money he saved on travel meant he could afford to buy healthier food for his baby. 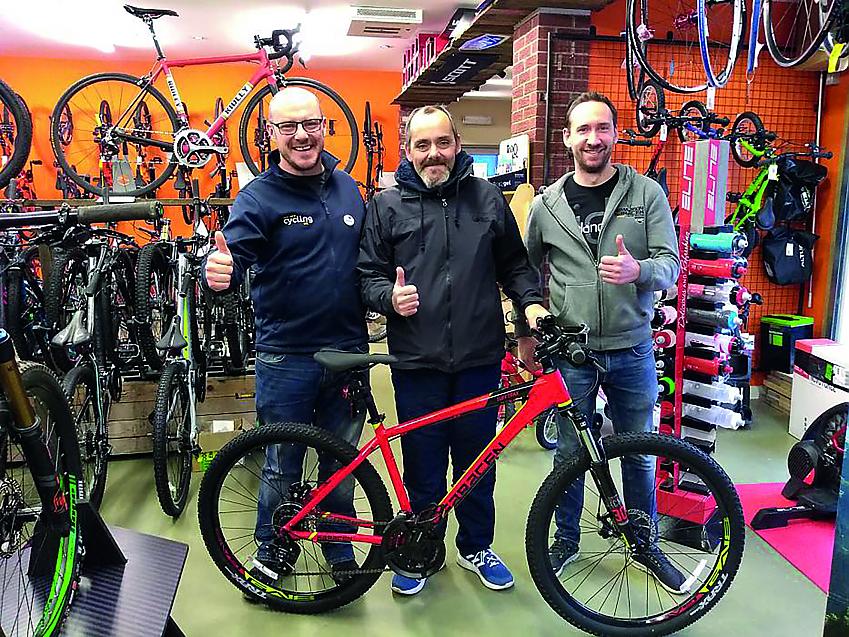 Steve McLean (centre) "I used to be stuck in the house for 10 years. It makes a lot of difference."

Ross was one of the first success stories of WheelNess, a Cycling UK project set up in summer 2018 in Inverness. It provides free access to bikes for people who could benefit from them but who can’t access them – often people on low incomes, or with physical or mental health conditions.

WheelNess works with several partners, such as NHS Highlands, to find people who might otherwise be off the cycling radar: local GPs, for instance, can direct patients their way.

Others come to WheelNess through word of mouth, such as Steven McLean. After he was badly injured while stationed in Belize, PTSD (posttraumatic stress disorder) meant Steven would leave home only to get his medication from the pharmacy, for fear of street encounters. WheelNess helped him find a bike, taking him to the shop he couldn’t otherwise face travelling to, as well as providing advice and contacts. Now he can better get through daily life thanks to being back in control: on a bike you’re in your own bubble, able to move in and out of situations at your own pace.

“It’s great,” Steven says. “I was out on it all day. It’s really helped me. You’re getting some exercise, you’re getting the fresh air, you’re getting out and about, when you used to be stuck in a house for ten years. It makes a lot of difference.”

Getting a bike may only be the first step; follow-up support can be vital. Which is why WheelNess has two project managers who can advise the new bike users on good routes to work or the shops, or basic maintenance such as puncture repair. In under a year they’ve got more than 150 people onto bikes. If funding is confirmed to extend the project, that could run to hundreds more.

In the Scottish capital, another Cycling UK project transforming lives is Edinburgh All-ability Bike Centre (Edinburgh ABC). Its two locations in the city have a remarkable range of all-ability cycles that enable anyone to ride: tandems, trikes, wheelchair bikes, side-by-sides, handcycles… The key word is inclusive: whatever someone’s situation, ABC can find a bike for them. This support is free to access.

Anna MacLeod is one of many whose lives have been enhanced by ABC. She’d never learned to cycle as a child but, in her late sixties, went to a drop-in session on the recommendation of a friend. She expected to start on a trike but – following the “best piece of advice I’ve ever had” – she removed the pedals from a standard bike and started scooting along on that.

“I went to the local park to practise, along with all the toddlers,” laughs Anna. “But it made such a difference!”

Once she got the hang of balancing, on went the pedals, and (after further sessions at WheelNess up in Inverness) there was no stopping her. She enjoys regular leisure rides on her step-through hybrid with her husband around lochs and along canal towpaths, and is now looking forward to a biking holiday around the bulb fields of the Netherlands.

Susan Robertson, a teacher in Edinburgh, had always loved leisure riding. But when she was diagnosed with multiple sclerosis in 2004, she thought her cycling days were over. As the condition progressed, she became more reliant on the car and her mobility scooter.

“The idea of going out cycling just didn’t seem like something I would be able to do,” says Susan. “I did hear ‘all abilities’ and ‘all different sorts of cycles’, but I still thought that my legs probably wouldn’t manage it.”

But at ABC, “the volunteers were just superb. I was made so welcome. It was so encouraging. It was so supportive. They were friendly. They were helpful. Nothing was any trouble. I was able to try out whatever kind of bike I wanted.”

Susan’s now on a semi-recumbent threewheeler. She’s built up her distances: round the building, then once round the hockey pitch, then a few times, and now further afield on cycle paths, out with a volunteer companion.

“That was terrific, going down by the Water of Leith,” she says. “Places that I used to cycle. It felt so good to be part of the human race again!”

The sheer enabling power of the bike is being utilised by many independent groups and individuals around Britain. They refurbish old bikes, donating some to those in need, selling others to the public to finance their work. Resurrection Bikes in Harrogate is one example; there are others in London, Norwich, and elsewhere.

In York, Emma Frost is a one-woman operation doing the same sort of thing. In her spare time she gathers unwanted bikes and donates them, restored, to people who could do with one. A local homeless hostel uses them as pool bikes, for instance. Many homeless people are in work but cannot afford rent because of the unreliability of zero-hours contracts. Taking a bus out to the warehouse only to be told you’re not wanted that day can be a serious financial setback. At least on a bike it’s cost-free and you’ve had some exercise.

For asylum seekers, the situation is even worse: they are not allowed to work until they’re given refugee status. So the simple business of getting around town – to access benefits, get to school, visit a cheaper supermarket – can be economically out of the question. A bike can enable to them to do this, and help rebuild their life. “For the kids, it’s a way of fitting in, feeling normal, having that first bike like their friends at school. But for the adults, it’s life changing,” says Emma.

Around the country there are many other projects which have provided a literal revolution to people’s lives, helped by affiliation with Cycling UK, and sometimes part-funded by it. For instance, in Milton Country Park near Cambridge, You Can Bike Too – one of over 40 Cycling UK-affiliated lottery-funded Inclusive Cycle Centres – helps get all sorts of people active by getting them onto bikes in a safe, beautiful outdoor setting.

You Can Bike Too’s Sarah Harris tells me the story of Eric, a ten-year-old with various challenges who refused to leave his parents’ side. Within ten minutes of being introduced to a suitable bike he was off up the path, and after a few Facebook posts featuring his joyful discovery of cycling went mildly viral, money was raised to buy him a bike of his own.

Eric’s now mad keen about bikes, can’t wait to get out for his regular rides, and his mum is surprised and delighted at the transformation. “The positive impact is not easily measured except in his delight and eagerness to cycle as often as possible,” she says. “What a turnaround!”

“It’s amazing to see how much the bike can change lives,” says Sarah. “The simple fact of being outdoors makes so much difference. The freedom, the independence, the confidence.”

These words are echoed by Blaen Roberts of Liverpool. He runs LiverPedlaaPool, which aims to get young people onto bikes who might otherwise spend their time in less desirable pursuits – and surrounded by less desirable people. Blaen began the group’s “Knives Down, Bikes Up” campaign. He knows about the world of gangs and crime from his own past, but says that being on a bike helped him find his own direction.

Confident and eloquent, Blaen is media savvy and has a talent for organisation, both put to good use running PedlaaPool: he’s racked up thousands of followers on the group’s Facebook page, has set up a competitive mountain biking team, and has brought sponsors on board.

Cycling’s always been part of Blaen’s life (“helps me meditate, helps me stay focused”) but he’s bringing it to others too. “It’s more than the bike,” says Blaen. “It’s a lifestyle, it’s about freedom, and it’s had a big impact on their lives.”

Blaen’s big local rides at the end of the month attract over 300 riders, and LiverPedlaaPool aims to give them all access to bikes, tools, knowhow – and most importantly, the chance to develop friends and a personal culture free from knives and intimidation.

Some are developing new skills, on first-aid or mountain bike leadership courses, while a recent biking trip out to the snow-covered Welsh mountains was an eye-opener for those who had never been out of Liverpool. One spoke for most of them when he said it was “the best day of my life”. 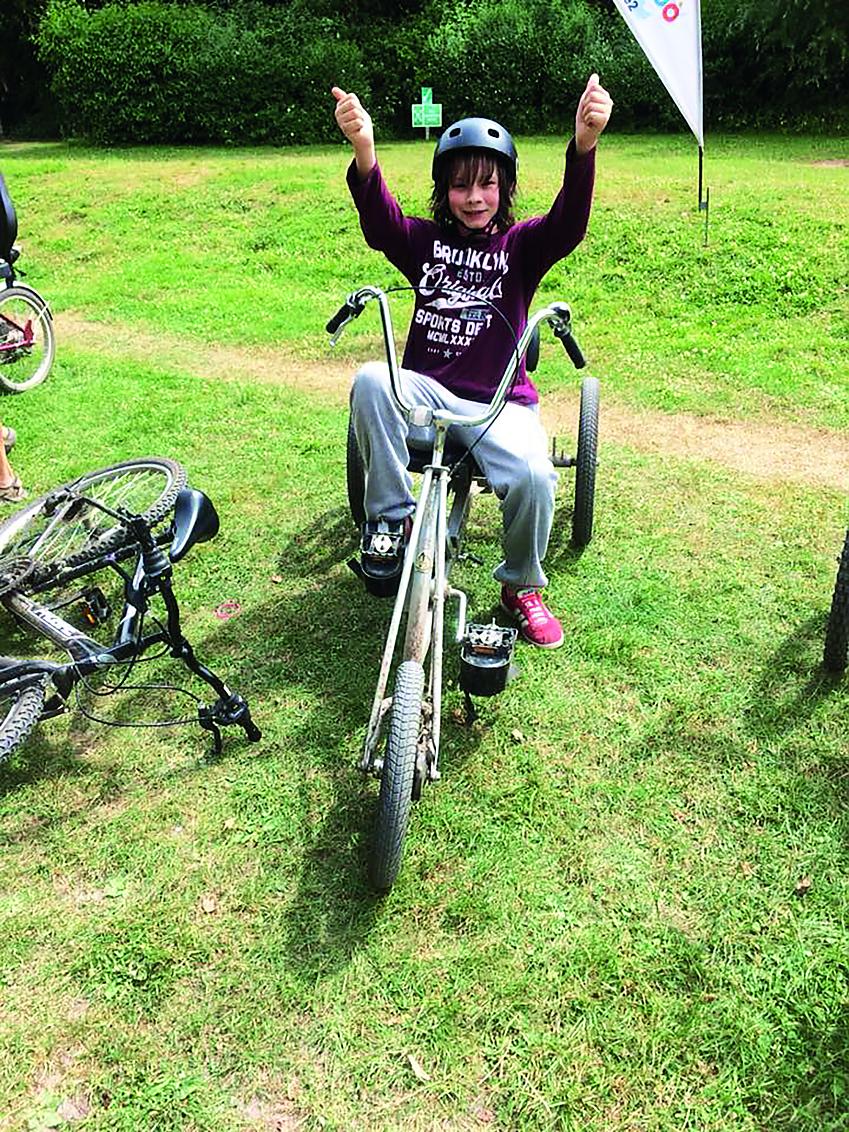 Cycling UK's mission to make cycling accessible to all

It’s a simple fact that lives are changed through cycling. Yet there are many barriers that hold people back from getting on a bike, whether that’s financial hardship or a lack of knowledge or skills, fear, disability, cultural background or health issues.

That’s why we’re working hard across the UK to develop projects to tackle those barriers. The result? Hundreds of thousands more people getting in the saddle. Across the country, Cycling UK Community Cycle Clubs are springing up to support people of all ages, backgrounds and abilities to continue cycling, like for example Balsall Heath CCC in Birmingham which saw its membership double from 60 to 125 in just 12 months.

Other projects like the Big Bike Revival, which has taken place across England for four years and in Scotland for three, have seen thousands of people connect – and reconnect – with cycling.

WheelNess, based in Inverness, encourages and supports people to cycle for everyday journeys.

Others, such as Play Together on Pedals, Edinburgh ABC, The Bothy, and Health Revolutions help the young, families, people with disabilities and those with health issues.

Many of the projects are run as partnerships, but ultimately we rely on you, our members to help us help others.