Growing up in Ireland with a horse-dealer mum, Saoirse Pottie had always spent time in nature and with animals. When she moved to the UK to study zoology, there was a gap in her life where horse riding used to be. She commuted by bike but needed a Eureka moment before really committing to a different kind of saddle.

Saoirse’s first bikepacking trip was spontaneous, and it drove home how cycling ticked all her boxes for adventure. In between seasonal jobs, and trying to save money, she couldn’t afford the flights to Amsterdam for a holiday so decided to try cycling there with a friend.

“We bought some highly unsuitable bikes off Gumtree for £45 each. A week later we were in Amsterdam. My mind was completely blown that we had cycled across four countries – I’d never cycled more than 5km before,” she said.

When Saoirse discovered that two close friends and former co-workers, Cass Stuttard and Emily Cowper-Coles, had also recently bought bikes, bikepacking together seemed like the perfect excuse to meet up. It spiralled. Since then they’ve gone on ever more ambitious rides together, with the Three Peaks Challenge just the latest.

So why this challenge, where hikers climb the three highest peaks of the UK – Snowdon (1,085m), Scafell Pike (978m) and Ben Nevis (1,345m) – with the added twist of cycling the 720km in between? Saoirse said that when researching the trip, they discovered they could beat the prevailing women’s record if they managed it in three days – and ‘three women, three peaks, three days’ had an irresistible symmetry to it. 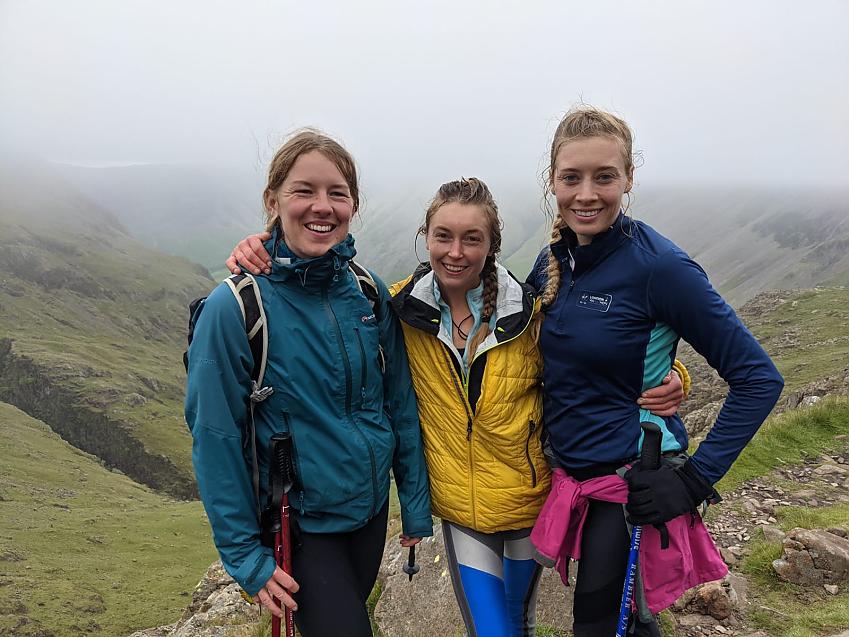 But there were going to be challenges, ranging from torrential rain and headwinds, to gear malfunction and the mental barriers that come with sleep deprivation. Did she ever feel like they weren’t going to make it?

“Strangely, no. The days leading up to the start of the challenge, I was so nervous I could barely eat and I was riddled with self-doubt. But once I was there, starting at the bottom of Snowdon, the concept felt simple – we just had to put one foot in front of the other and eventually we would make it to the end.”

The first hour back on your bike in the morning after having only slept for a few hours is tough, Saoirse said. “But getting to the start line is the hardest part, and if you’ve had the courage to do that then you’re already halfway there.”

When I asked her about her favourite terrain, Saoirse said off-road, going where cars can’t: “There are so many amazing trails to explore in the UK,” she added. And while she has always adventured with others, this year she wants to become more self-reliant.

“I have learned so much by pushing myself out of my comfort zone and I want to keep stretching those boundaries. So I have entered a couple of bikepacking events and races this year, with the goal of learning something new.”

She is also making plans to tour Africa, from Kilimanjaro to Cape Town, with fellow peaks adventurer Cass.

Bikepacking throughout the year

#12nightsoutin1year is Cycling UK’s yearlong bikepacking challenge, encouraging everyone to step out of their comfort zone and explore their local area with an overnight stay outdoors.

Saoirse is the January winner of the accompanying photo competition, with the winning snap taken during a group ride and camp-out she organised in the New Forest.