Born with no arms and one leg, Cycling UK member Paul Fogarty returned to cycling just over a year ago on a modified recumbent e-trike. Andrew Gubbins spoke to him

The first coronavirus lockdown in 2020 inspired many people to start cycling again, among them 40-year-old Paul Fogarty. “I had reached that stage where I was probably eating too much, spending all day sat at a desk, and not getting enough exercise,” he said. “I decided it was time to change this, but I had no idea if anyone could help me.”

Paul was born with no arms and one leg. He’s used a prosthetic leg since the age of three to walk and to help maintain his independence. He had cycled before: he used an upright trike to get to secondary school and, after turning 18, to the pub when socialising with friends. But he no longer had that.

His search for a replacement was spurred by an old friend, Tom Yendell, a foot and mouth artist. Tom had posted some pictures on Facebook of him riding an adapted trike. “If Tom can ride a trike, I must be able to,” Paul told himself. He started doing research online. The most promising option was right on his Telford doorstep: Quest, based just five miles away in Shifnal.

“When I came across Quest, I could not believe my luck,” Paul said. “I immediately gave them a call and arranged to meet with managing director Rob Henshaw.”

Following an initial assessment, Rob and his colleagues sat down and started by breaking Paul’s needs into five areas: pedalling, steering, braking, gearing, and safety. For the base model, they settled on an ICE Adventure recumbent trike with Shimano STEPS electric assistance.

“The electric motor uses sensor inputs from each side,” Rob explained, “so we had to counter that by asking Paul to wear a shoe with a cleat on his good side. That way he can put power through the cranks on the down and up stroke, which tricks the system into thinking there are two legs at work. 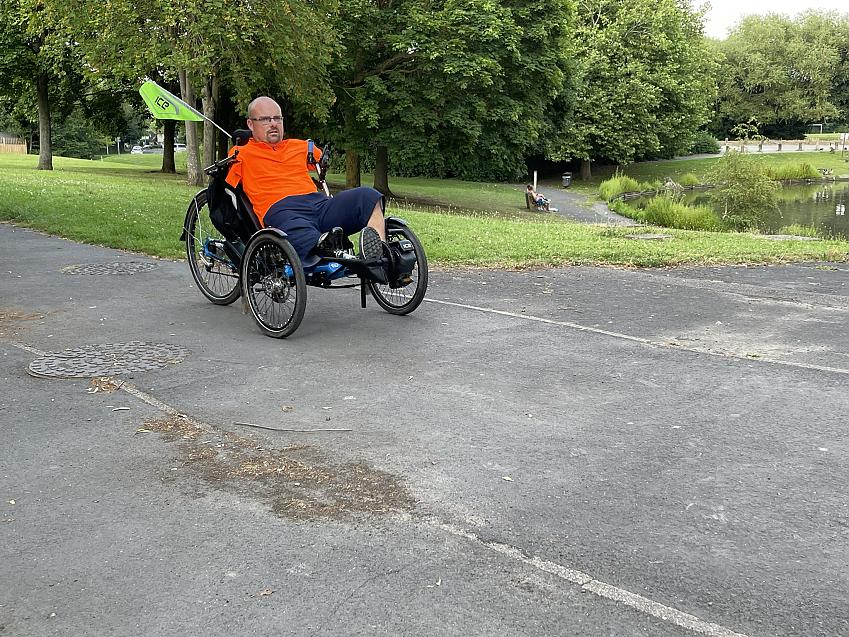 “We initially set up a harness that fitted around Paul’s shoulders, with loops around the steering uprights to enable him to steer by twisting his shoulders. It wasn’t great but it allowed us to show Paul that things were possible. We later used an articulated camera-mount system to try and ascertain the rough positioning of the steering uprights so that we could then fabricate something. Once we had some uprights by Paul’s shoulders, we could then look at controls such as braking and gear changing.

“The gearing is automatic with a manual override operated by Shimano Di2 buttons as Paul has sufficient dexterity to push these. When it came to the braking system, we agreed not to have too many functions on the same side of the body as this would ensure braking could be more spontaneous and not be confused with steering and gear functions. Paul signals his manoeuvres through a wireless control operating LED indicators.”

Paul took delivery of his finished trike at the end of 2020. “I cannot explain the feeling of freedom I now have thanks to Rob and the amazing guys at Quest,” he said. “I have already done over 1,500 miles, including the Royal British Legion Poppy Ride, where I raised over £1,000.

“The end result is more than I could have ever hoped for. If anyone thinks cycling is not possible, I would urge them to speak to Rob. If I can do it, anyone can”.

An ICE Adventure trike with Shimano STEPS E6100 electric assistance costs from about £6,800, without other modifications.

Contact Quest for more information on the full range of adaptive cycles as well as advice on funding or to arrange an assessment.