Last year, 54-year-old Marcia set the women’s record for LEJOGLE – Land’s End to John o’ Groats and back. She spoke to Dan Joyce

Lots of people have cycled more during the pandemic. Marcia Roberts went further: she rode 1,742 miles from Land’s End to John o’ Groats and back again. She became the first woman to set a record for LEJOGLE: 11 days, 13 hours and 13 minutes.

In a sense, coronavirus was the spur. She’d spent the previous winter training for a 1,890km bikepacking event, The Race Around the Netherlands. When that was cancelled, Marcia looked for a UK-based challenge.

“I thought about doing Land’s End to John o’ Groats,” she said. “But I’d never get the record because I couldn’t possibly beat Lynne Biddulph (who did it in 52 hours, 45 minutes and 11 seconds). So I thought: what about going there and back?”

Marcia contacted Guinness World Records, who confirmed that the women’s LEJOGLE record was up for grabs. Oddly, given the lack of a time to beat, they set her a target of seven days. That’s not that much longer than the men’s record and overlooked the fact that she was riding unsupported, staying in Travelodges and Premier Inns. (“Because you can get into them 24 hours a day – and they let you take a bike in.”) 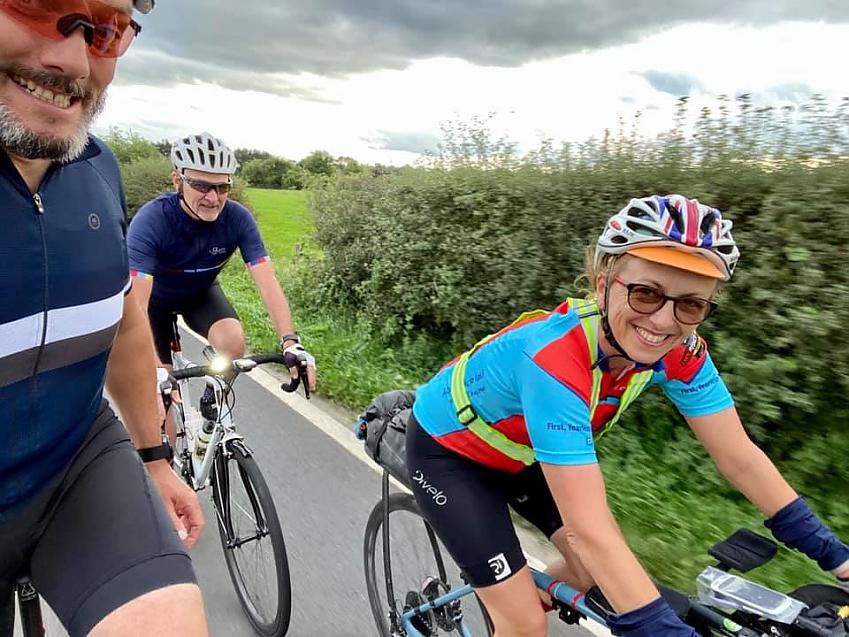 Marcia initially set herself a target of ten days

“I had some choice words. They came back with eight and a half days,” she said. “I had to change my route to include a lot of main roads. Not just because they’re more direct but because they’re faster. You don’t stop on them so much.”

Marcia planned to ride four legs a day, each three and a half hours long. As an experienced audax cyclist, she knew she could do 50 miles in that time. Four legs would mean 200 miles a day – enough to meet Guinness’s schedule.

I reached the top at sunset. It was incredible. My husband Del was waiting for me and there was no way I was just riding away from it. We stood there for about 20 minutes and watched the sun go down

“That was the plan,” she said. “It worked well the first two days… Then Storm Francis hit. The actual storm just made me really wet and a bit fed up. But it was a low point because it caused so many additional problems.”

Chief among them were saddle sores. Her navigation also suffered: her Garmin wouldn’t work in torrential rain so she put it in a plastic bag, which steamed up, as did her glasses. She couldn’t follow her Garmin’s pink route line. 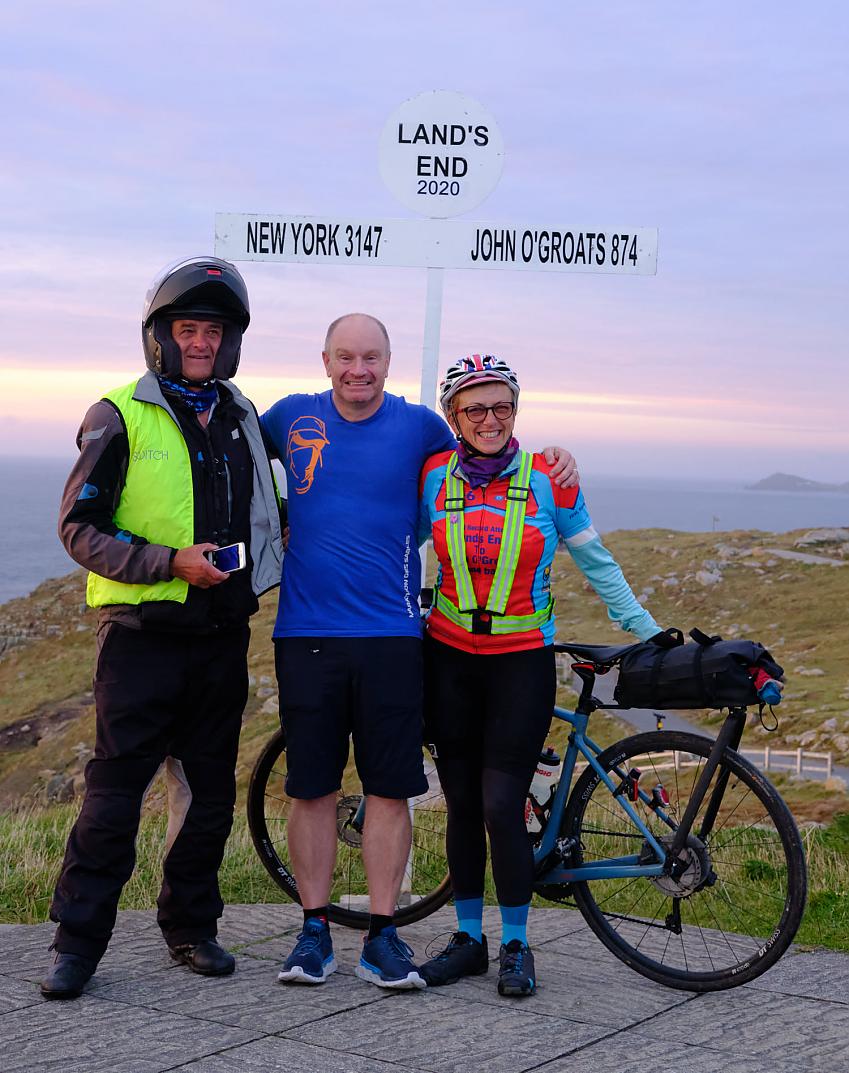 With husband Del and support biker at Lands End

“When I got to Penrith, for example, I went round in circles. People were following my dot and going, ‘Where the hell is she? Why’s she back there again?’”

They were writing on the Facebook page Marcia set up for her LEJOGLE ride. The comments were her main source of motivation. “Whenever I sat down to have a cup of tea, I would glance at them – and it was amazing. Once you’ve got that support behind you, you can’t stop. You just can’t.” 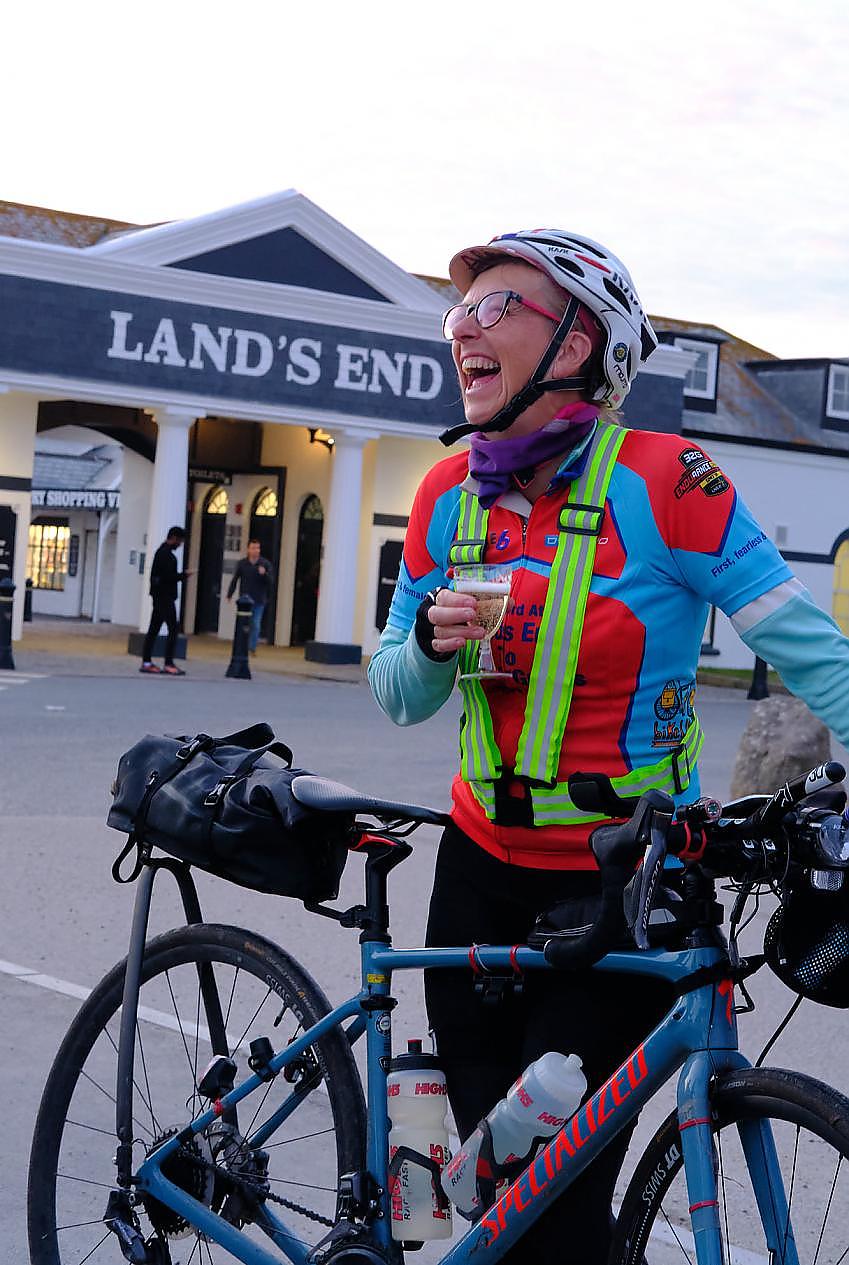 At the finish line with a well-earned glass of bubbly

Like any long ride, there were high points as well as lows. “Between Loch Lomond and Glencoe, you go over the Black Mount,” she said. “I reached the top at sunset. It was incredible. My husband Del was waiting for me and there was no way I was just riding away from it. We stood there for about 20 minutes and watched the sun go down.”

While Marcia waits for Guinness to ratify her record, she is setting her sights on other long rides. In particular, she wants to the ride the 2021 Race Around the Netherlands in May. “I may have another go at the eight-and-a-half day LEJOGLE, if I can get support,” she said. “I’m also planning to do the North Coast 500 with a friend in August. For pleasure… but we’re still going to do a silly amount of miles a day.”

To enable other cyclists to join her in spirit, Marcia set up a virtual LEJOGLE – an idea she’ll use again for a coast-to-coast European challenge she has planned for 2021.

You can check out her blog to stay up to date with her adventures.

Her LEJOGLE ride raised thousands for the mental health charity Solent Mind via her JustGiving page.

Staycation inspiration: Scotland View
Join our 70,000 strong membership and together we can make a better world by bike Join
Cycling UK continues to support the UK to cycle
This remains true during this difficult period with the ongoing threat of coronavirus Covid-19
Read our latest advice on cycling