How e-cargo delivery businesses are changing the logistics industry

Farr Out Deliveries in Edinburgh was set up during the pandemic

How e-cargo delivery businesses are changing the logistics industry

E-cargo bikes are cleaner, greener, and often quicker than vans. Antony De Heveningham, transport consultant and one of the directors of Cargodale, considers their uses

It was April 2020, as the UK’s first lockdown was starting, I had an excited phone call from my friend Beate. “I’ve hired an electric cargo bike, she’s called Bertha, and we’re going to use her to deliver stuff from the market to people who are shielding. Do you want to help?”

Fast forward 15 months, and we’re running a fully-fledged bike delivery service in a quiet, extremely hilly corner of West Yorkshire. Cargodale, as we christened our project, has grown, and now has six e-cargo bikes serving an eclectic list of local businesses, delivering everything from cheese to CBD oil.

Although to start with all the riders were volunteers, we’ve registered the company as a living wage employer and started offering paid shifts to folk who’ve seen their usual work dry up during the pandemic. And we’ve shown that e-cargo bikes (and their riders) are capable of dealing with one-in-four hills, rain, wind, and snow. 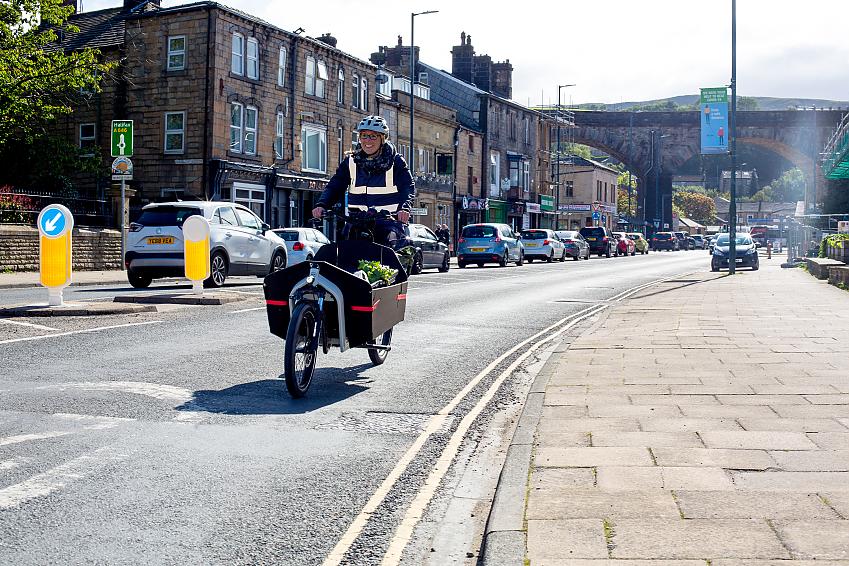 Other people are doing the same thing as Cargodale in their own towns. From Edinburgh to Exeter, cargo bike delivery services have sprung into action. The pandemic may have been the catalyst but there’s also a widespread feeling that the delivery industry needs a radical rethink of its environmental and ethical approach. There are also giant leaps being made by companies like Pedal & Post and Pedal Me to establish cargo bike delivery as part of the UK’s logistics industry.

“We’re trying to become the de facto local delivery company in Edinburgh,” says Colin McGregor, a rider for Farr Out Deliveries, an upstart startup whose fun hipster image belies serious ambitions. “Every week we deliver beer, books, garden tools, fresh bakes, chocolate, coffee, clothing, handbags, art supplies, plants...The response has been really good. We have a core group of businesses that now use us as their sole local delivery provider, and that group continues to grow every week. Customers have been incredibly receptive to receiving goods by bike. I doubt many people run out to take a picture of a parcel being delivered by van!”

Farr Out was started by friends Alex Fitzhowle, Frazer Martin and David Farr Squire, after the pandemic brought their previous employment to a sudden halt. Initially using bikes loaned from social enterprises, they now deliver for over 30 local businesses, ‘predominantly food-based’, but with some interesting sidelines.

“We set out to showcase what the bikes can do,” elaborates founder David. “We deliver for a local tool library, which means ladders and big chop saws. We’ve carried sofas, office furniture, someone’s concert-sized electric piano. We walked into the pub one evening and there was a massive plastic gorilla. We thought: ‘We need to carry that around!’”

Underpinning all the Instagram-friendly shenanigans is a genuine desire to make their city a better place. As Colin puts it: “Even if we disregard the obvious environmental and traffic reduction benefits, there’s no quicker or more efficient way to deliver goods in Edinburgh than by cargo bike.”

Cargo bike deliveries and cities might seem like a natural fit but they’re starting to be used in rural areas too – such as Shropshire, home to Islabikes. The company recently started trialling cargo bike delivery for local businesses in Ludlow.

“The response has been really positive,” says MD Tim Goodall. “We’ve almost been overwhelmed. At the moment we’re delivering for one business and one charity, but have at least half a dozen more businesses interested.”

The trial may be small scale at present but that hasn’t reduced Tim and his team’s enthusiasm. “We set out wanting to make it wash its own face, but in the course of doing it we started feeling that we just had to make it happen regardless. The benefits aren’t just monetary – it might be the delivery driver smiling at someone who hasn’t been outside for the last two days. You don’t get that if someone’s inside a steel box.”

My own experience in Calderdale is that the less urbanised the area, the more difficult it is to make a viable business. That doesn’t mean it can’t be done. The e-assist technology on modern cargo bikes makes it possible to cover longer and hillier routes, and in many places in the UK there’s a growing desire to source and shop locally, meaning shorter supply chains and a more accessible customer base. We’ve even delivered veg boxes where all the produce is grown within a few miles of our HQ. 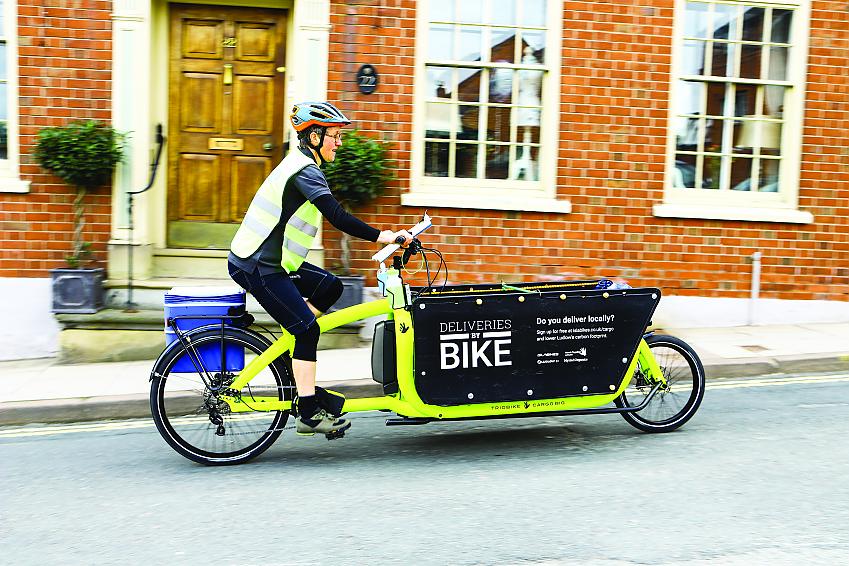 Isla Rowntree, former MD of Islabikes, on her rounds in Ludlow

Starting up, starting over

The versatility of e-cargo bikes is highlighted by another lockdown startup, Colchester E-Cargo Bike. Founder Lee Pugh must be one of the most cheerful people in cargo bike delivery, partly because of the way that riding has transformed his life. “I used to be a live events manager in touring and theatre,” he says. “After a few months of lockdown I was unemployed, fat and miserable. I got involved in a bike project which had just got an e-cargo bike, and as soon as I saw it I was smitten.”

Lee now heads up a small team that delivers for a diverse range of local businesses. They’ve also managed to land other work, thanks to Colchester’s participation in e-scooter trials. “There have been 325 Spin scooters in Colchester since February,” he says. “They were carrying spare batteries for them in a diesel van, so I said: ‘We could be doing this for you’. After the first weekend of trials they asked to extend by two months. We keep an eye out for scooters in distress, and as long as we’re not doing a time-critical delivery, we’ll sort it out.”

Lee has been supported along the way by more established companies. “I did a City and Guilds course with Pedal Me when I’d been riding for about six weeks, and in just half a day I came away with half a dozen tips and techniques that were really useful. I can fire Pedal & Post or Pedal Me a message and they’ll respond.”

Part of the reason for this helpful attitude may be that it wasn’t so long ago that these major players were small startups. Christopher Benton, founder of Oxford’s Pedal & Post, recounts how his business started ‘almost by accident’. “I used to have a huge Dutch transport bike that had been converted to a coffee trike,” he says. “I couldn’t always get my gas, food and water to events in one go. No taxi driver wanted to take me, and I don’t drive, so I had to find another way. I ended up using a cargo bike. A few other businesses saw what I was up to and a local bakery asked if we could do deliveries for them into the city.”

From there the business has grown and it now has 15 employees and around 120 clients, including big names like Yodel, Riverford, and the NHS. But it hasn’t been a completely smooth road: at the start of the first lockdown, Pedal & Post saw much of its work dry up entirely. The company made the bold decision to keep all its staff off furlough and set up an online grocery delivery service, enabling the company to bridge the gap and land new work, such as couriering samples for the Oxford vaccine trials. “We felt it was the business’s role to bear the burden of the pandemic, and as our team is loyal to us, we should be loyal to them.” 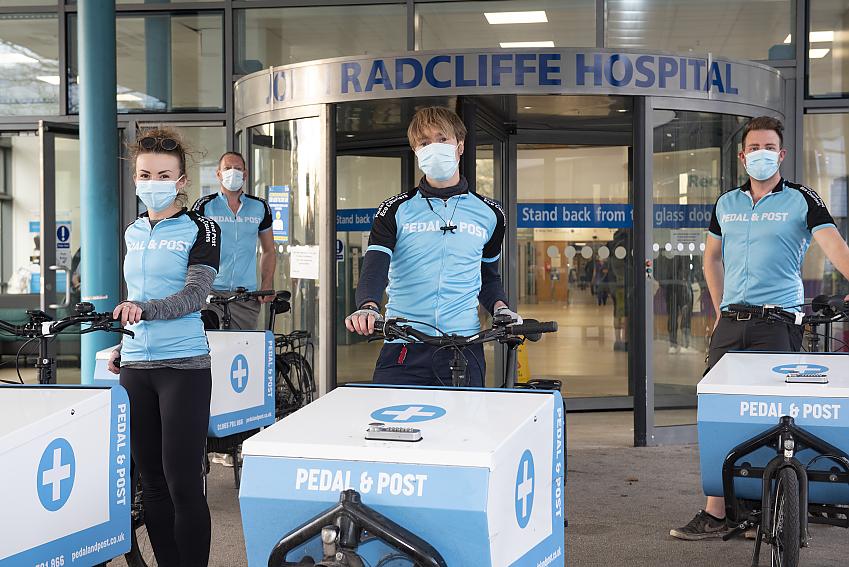 This people-first attitude is shared by other cargo bike delivery companies. “Our company is based on cooperative ideals. We pay everyone who rides above the living wage,” says David from Farr Out. “When people tell us they like what we’re doing but we’re too expensive, that’s difficult, because we’re doing things the right way and we know that some of our competitors aren’t.”

The higher cost from rejecting gig economics is just one barrier to businesses taking up cargo bike delivery. I’ve also encountered some understandable scepticism about sending a bike to do a van’s job. But while bikes might not be able to match the payload of a van, they’re undeniably more efficient. A recent report from the University of Westminster found that cargo bikes in London were on average 60% faster than vans, while emitting 90% less CO2. Moreover, vans tend to be used inefficiently. A 2013 briefing paper from Transport for London noted: “Vans are relatively poorly-utilised – 39% are less than one-quarter full, with an average payload of just 300kg.” The payload of one of Pedal & Post’s Iceni trikes is 250kg, bringing motor and pedal power onto a much more level playing field. In Tim Goodall’s words: “It’s like businesses have to see it to believe it.”

Dim perceptions of cargo bike delivery are just one barrier to startup delivery businesses. “Suitable e-bikes are expensive and in short supply,” says Colin from Farr Out. “We’ve had to rely on grants and personal loans to get us to this stage. Grants are few and far between and we have found ourselves missing out on funding.”

There’s a consensus among the couriers I talk to that cargo bikes need to be subsidised in the same way as other electric vehicles. Thankfully that finally seems to be happening with July 2021’s announcement of a new grant scheme from the Energy Saving Trust, albeit only for businesses in England.

Cargo bikes for all

There’s also a risk that, with the focus on cargo bikes making deliveries, their other potential uses could be overlooked. Naomi Arnold is coordinator for Edinburgh-based Cargo Bike Movement, a social enterprise that aims to bring cargo bikes to school runs and everyday life through training and grant schemes.

Naomi welcomes the boom in cargo bike delivery (Cargo Bike Movement was an early supporter of Farr Out Deliveries), but she believes their applications are much wider. “At the moment, it seems like every news article on cargo bikes has exactly the same photo – a young male doing a delivery in a busy urban environment. It’s really important that people see people who look like them on cargo bikes. Cargo bikes can be great for the back and forth journeys that are typically made by women. They can create a level of freedom and independence that’s hard to match.”

Naomi believes that hands-on experience with cargo bikes in a safe environment is crucial to sell their benefits. “Typically the volunteers we get are able-bodied people who already ride bikes. But they’re all still a bit nervous. There needs to be free training and it needs to be accessible, otherwise it’s just not going to become normalised.”

There’s plenty of scope for crossover between delivery services and private cargo bike use. At Cargodale we’ve prompted local residents to take the plunge and buy their own cargo bikes by giving demo sessions. And with more cargo bikes on the road, there’s more chance that they’ll stop being perceived as a novelty or ‘a London thing’, and go on to be seen for what they are: a fantastically versatile and efficient way of moving stuff around.

A look at some of the bikes used by courier companies in this article. They all have different strengths and ideal applications. Range isn’t fixed: it depends on how hilly your route is, payload weight, and the level of assist used. 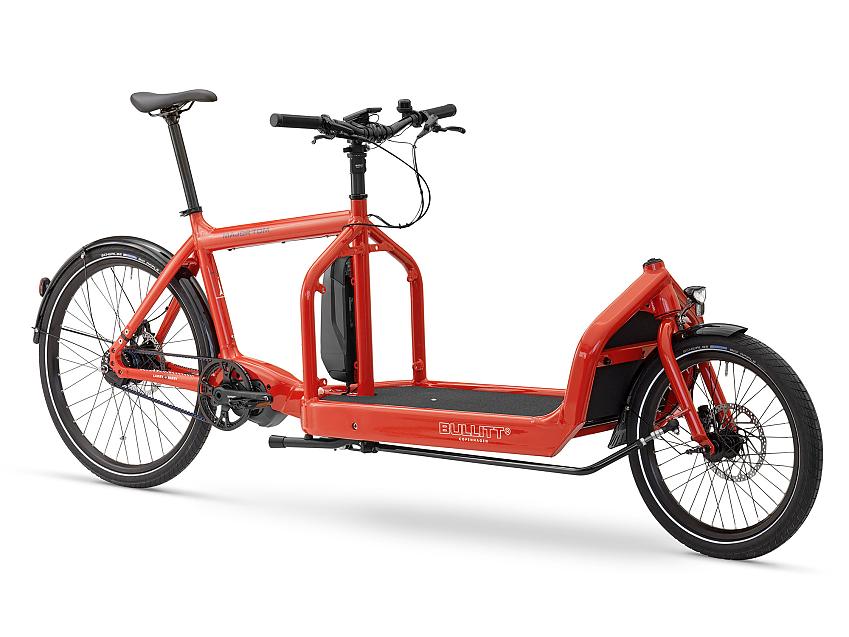 Weak points: Not as roomy as some. 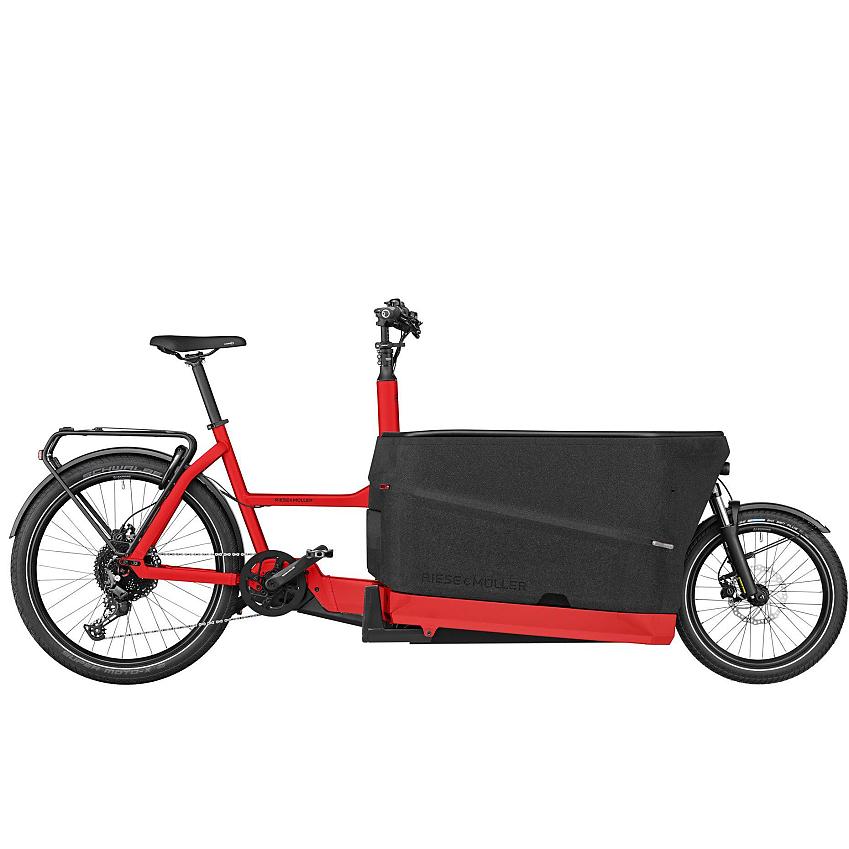 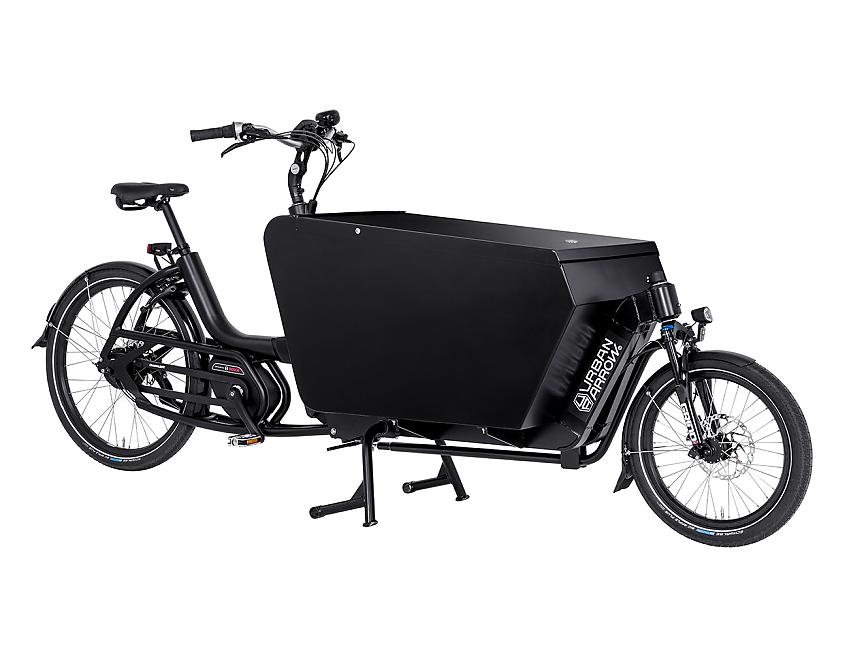 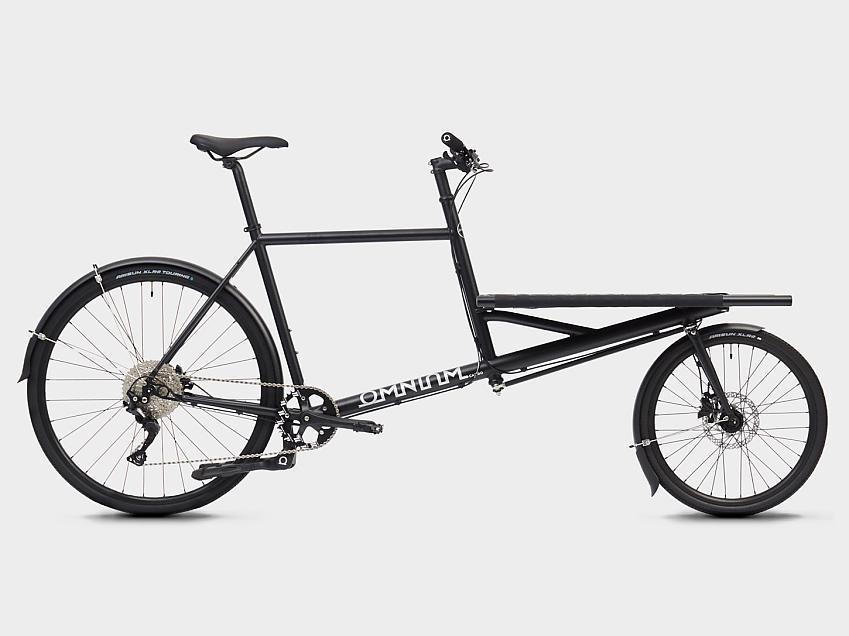 Range: As far as your legs can carry you! 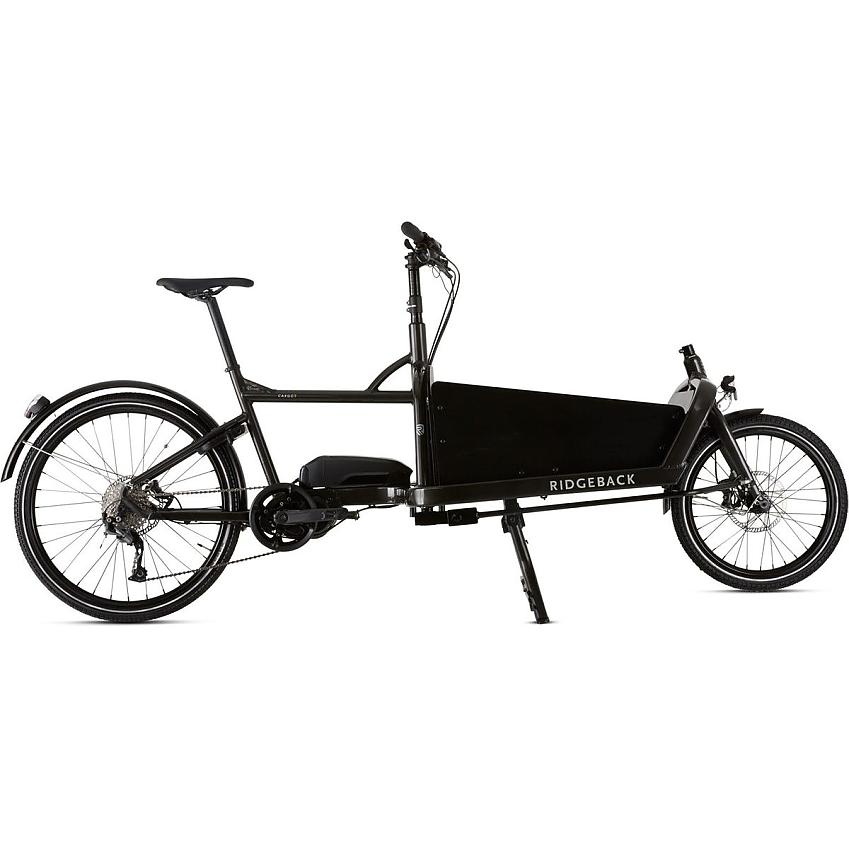