A trailer can turn almost any cycle into a cargo bike. Richard Peace puts four through their paces.

Do you regularly find your panniers full to overflowing and wish you could get more on your bike? Maybe it’s time to think about a cargo trailer. They do many of the things cargo bikes can do at a fraction of the cost. And, of course, they can be used with multiple bikes. They are versatile, load-carrying solutions.

I picked four very different cargo trailers to show the wide variety of designs and uses. They aren’t just for getting a bit of extra shopping on the bike, extremely useful though that is. They can be truly transformative, allowing you to take sizeable and heavy loads; some will even accommodate a fridge, for example. Single-wheel models, meanwhile, are suitable for use off-road.

Any bike towing a loaded trailer needs to have good brakes to deal with the extra weight. The heavier the load and the hillier the terrain, the lower the gears you’ll want. If you tow a trailer during the hours of darkness, it is required by law to have a red rear light and a triangular red rear reflector. 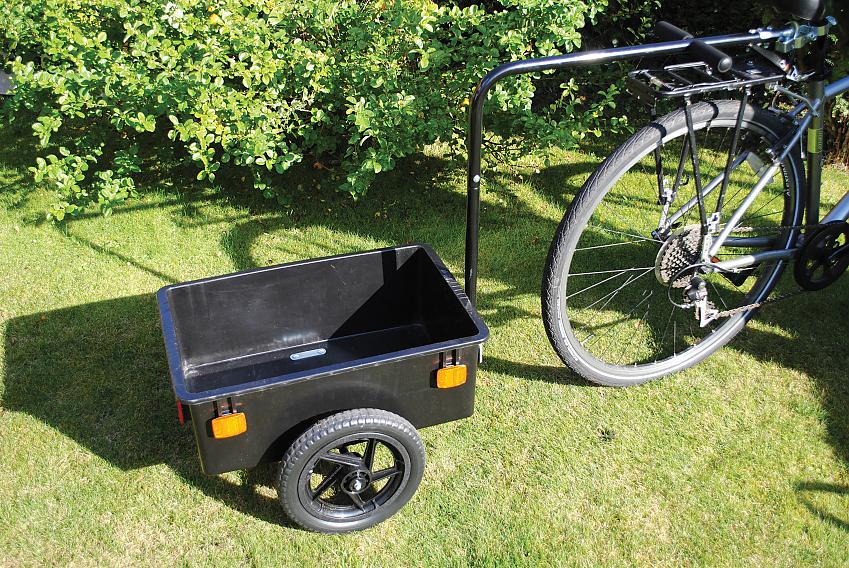 The HBS Mini biycle trailer is a  simple box trailer (54×35× 20cm internal) that is fine for shopping and the like. The minitowball seatpost hitch works well; just undo the securing nut and push the lever back to unhitch. It did rattle on the bike, until I added some glue and rubber.

Off the bike, it’s easily wheeled around as the towbar doubles as handle, though it lacks a kickstand for upright parking. Build quality is basic and you are relying on the strength of the plastic box for axle and towbar mounting.

You need a bit of mechanical logic to assemble the unit as the print instructions are tiny and don’t quite match all of the parts you need to assemble. 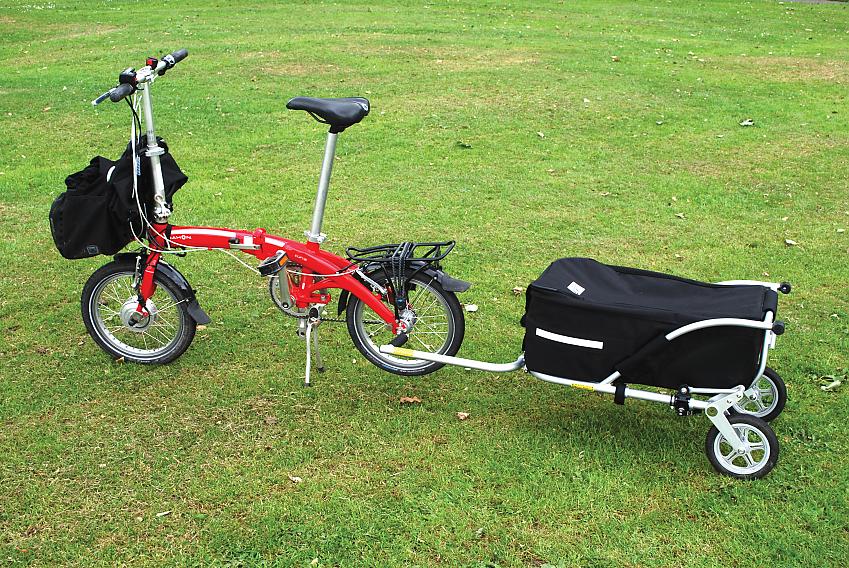 Once the T1's small rear wheels are retracted, it becomes a wheeled suitcase. I found it handled 20kg comfortably in its waterproof PU and nylon bag, which is supported by an alloy frame. In concourse-mode, the extension can be used as a handle or folded down.

The 8in wheels are fine for tarmac but have a greater tendency to flip the trailer over large bumps. The other slight weakness is the quick-release lockouts on the wheel retraction mechanisms, which need to be tightened very firmly to stop the wheels slipping.

A clever combination of cycle trailer and concourse luggage. 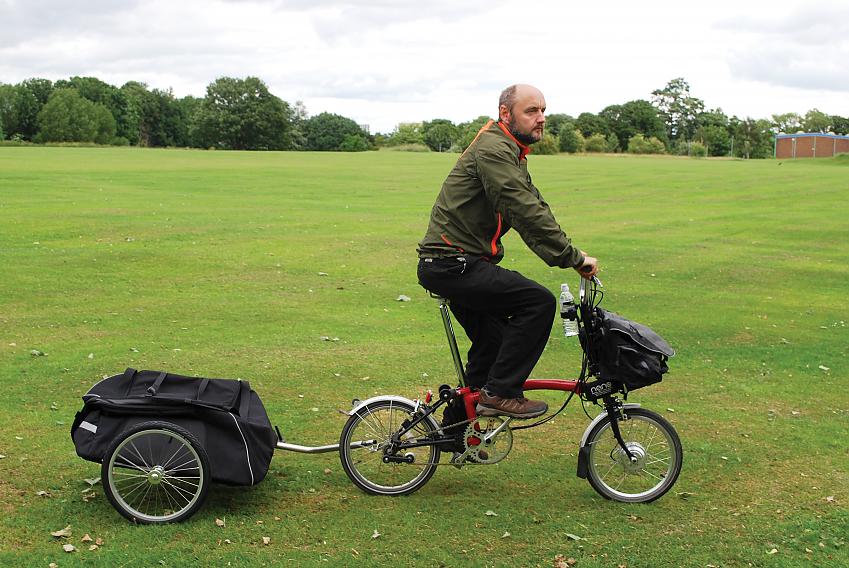 The frame is a well-built, lightweight alloy ‘skeleton’ with quick-release wheels and a removable towbar. If you choose the Trekking or Chubby models, a large pocket stows these, converting the whole package into a large bag, with an option of a backpack harness.

I own the Brompton-specific Chubby: its bag will accommodate a folded Brompton. The two other models a are flatbed and frameonly skeleton.

Versatile and well made. Some models convert into big bags. 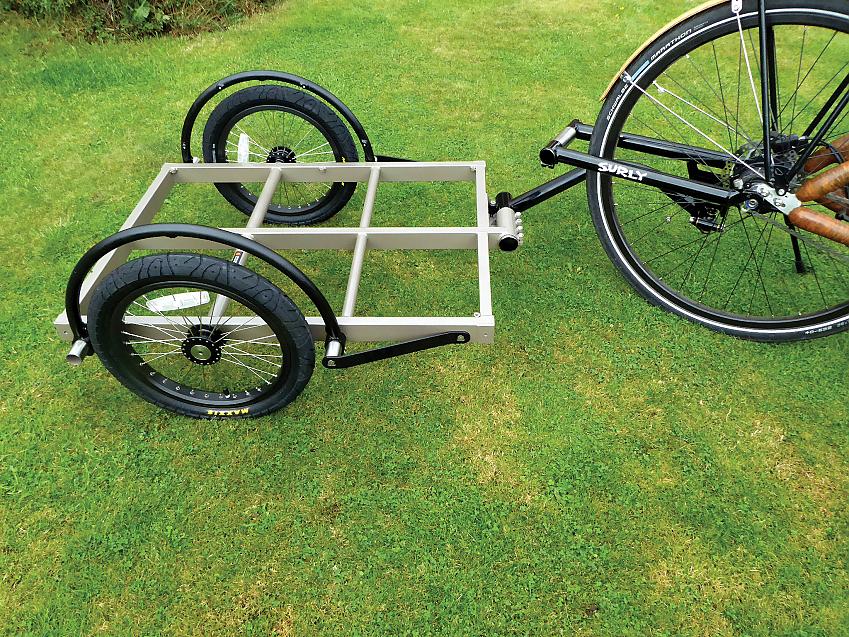 The hitch is sold separately and attaches securely on both sides of the axle. Threaded mounting points on the flatbed enable you to add your own fittings.

The most I towed was 65kg of power tools (by e-bike), and I wouldn’t have wanted to haul much more. But if you can cope with bigger loads, the trailer will too.

Just make sure your bike is mechanically sound; powerful brakes are a must.

This is a monster of a trailer! It’ll haul whatever you can cope with.

Getting the right trailer depends on judging your needs accurately. For those who want a budget solution for a bit of extra carrying capacity, the HBS Mini will do the job. The T1 is handy for those with folding bikes who hop on and off other forms of transport, as it is so quick to turn itself into a piece of luggage. The Radical Design is probably the most versatile option presented here, spanning touring and utilitarian use. The Surly Ted, meanwhile, is a big investment, but if you regularly want to haul everything and the kitchen sink, the Ted will do it.

Maximum load rating is usually in kilos and ranges from around 35kg to well over 100kg. (Note that great care is needed with heavier loads.) Capacity rating is in litres, ranging from around 40 to hundreds of litres. Assess what your maximum requirements are.

Different trailers attach to different points on the bike, usually either the seatpost or one or both sides of the axle, but sometimes part of the frame’s rear triangle. Make sure the trailer design is compatible with the bike(s) you want to use it with.

The greater the weight you intend to carry, the more important robust construction is. Especially important are load-bearing points like axles, axle mountings, and hitch.

Often neglected, these make for a practical trailer. Are there fixing points for a rear light? Bungees?

Ease of use off the bike

Some trailers (like the HBS, T1, and Radical here) are clearly designed to be ‘hand manoeuvrable’. It’s a very useful feature for moving cargo around when you’ve stopped cycling.

How e-cargo delivery businesses are changing the logistics industry View

Kit for cycling with a dog View