Great rides: The Two Mills Challenge Ride in the Wirral

Great rides: The Two Mills Challenge Ride in the Wirral

On the ﬁrst day of summertime, Cycle magazine editor Dan Joyce rode the Two Mills (Wirral) Early Season Challenge Ride, one of two events that kicked off this year’s series.

The sky was blue above the Welsh border. Birds sang. Groups of cyclists passed me and my camera with waves, a whirr of gears, and a susurration of tyres on tarmac. On the first day of British Summertime, after an interminable winter, it felt like spring had finally arrived. It was perfect for an early-season reliability ride, which is what the Two Mills (Wirral) Challenge Ride originated as – and still is. Riders could scarcely believe their good fortune and kept thanking the organisers for arranging such nice weather.

The start and finish were at Farndon, ten miles south of Chester. I cycled there, saddlebag packed as a precaution with winter overshoes and a Gore-Tex jacket. We’d just endured the Pest from the West and before that the Beast from the East. Yet there was sunshine as I rode out of Chester along the Shropshire Union Canal. With ducks and the occasional dog walker for company, the towpath was serene but too roughly surfaced for 25mm tyres. (“And that’s the good bit,” I was later told by Sue Booth of the Chester Fabulous Ladies.) 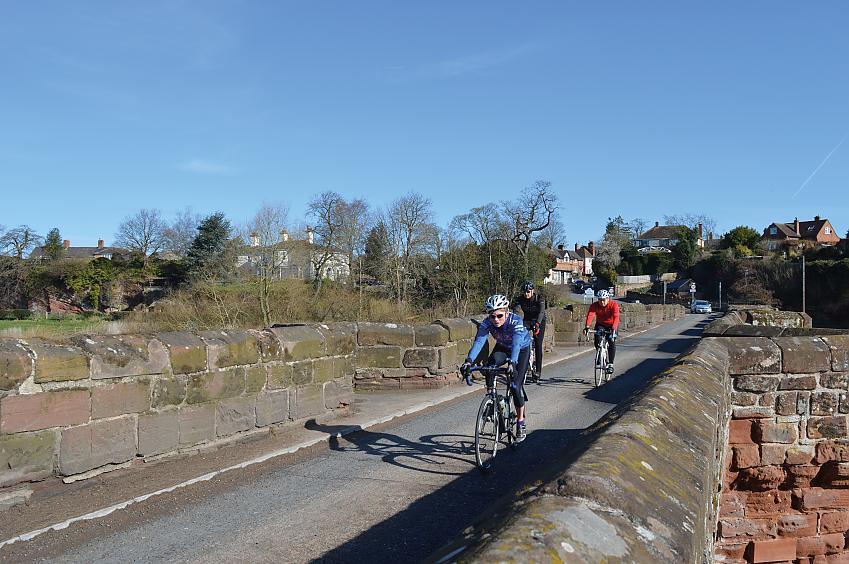 Arriving at Farndon Community Club, the carpark was packed with bikes and cyclists, along with a puzzling sign – something about a dog show. Organiser Janet Gregory explained: “We arrived at 8.30am to find the area we normally park a hundred plus cars in coned off, with a course set up for a dog agility show that was also happening that morning. A large number of participants was expected – four legged and four wheeled! That required a re-adjustment of our plans.”

The car park marshals were kept busy but I didn’t see any dogs barking at cyclists or any other signs of conflict. Having run the event since 2007, Janet is used to keeping the show (bike not dog) on the road. It’s been cancelled just once, snowed off in 2013. In 2015 the hall itself was accidentally double-booked: Janet and her team arrived to find time triallists with aero bikes and pointy hats warming up on rollers. Then, as this year, both events went ahead without a hitch. The Two Mills (Wirral) Early Season Challenge Ride is emphatically not a race. Electronic timing with a swipe card is used because the 50-mile event (but not the 50km one) is still a reliability ride: you choose whether you want to attempt it in four or five hours. The clock doesn’t stop for lunch or, in my case, standing at the verge with a camera.

As a four-hour rider, I was among the last to set off. Since I needed to get photos of the event, I ended up leapfrogging other cyclists rather than riding in one group throughout. That was how I found myself alongside John Wynne from Knutsford, talking about navigation. He’d got a new smartphone and its screen kept dimming so he couldn’t see the route. I was using an old Garmin Edge 500 with rudimentary route instructions: a straight line with a blob on it; the first dozen or so characters of any way-point text (for example, ‘WARNING SUDD’); and a bleep if I went off the route.

While it was frustrating to get turn alerts after I’d gone past them, the Edge 500 did get me round. Most of my temporary wrong turns occurred when I followed other cyclists, assuming they were taking part in the Challenge Ride when they weren’t. It was an uncommonly nice day, and there were lots of other cyclists about.

Crossing the River Alyn, I caught up with another rider who was doing the Two Mills ride. The sky above us was crisscrossed with contrails. I pointed out a large aeroplane banking low in the near distance and wondered aloud where it was from; I couldn’t think of a nearby airport. “Hawarden,” he said. “They send Airbus wings to France from there on Belugas.”

Near the top of Barracks Lane, on the outskirts of Penyffordd, I stopped for a while as there was a good view of riders cresting the rise, with the sandstone hills of the Mid Cheshire Ridge in the background. I could make out the rocky crag that Beeston Castle sits on, although not the castle itself. The landscape felt nostalgically familiar because I grew up not far from here. The softness of the hills, the lushness of the greenery, and the Friesian cows in the tidy patchwork fields took me back four decades.

Remounting the bike, I cycled back to Farndon with Mike from Chester, who said he lived near the zoo. “This must seem pretty flat compared to where you come from,” he said amiably, meaning North Yorkshire. What the countryside lacked in steep gradients, however, it made up for with its dense network of quiet lanes. It was no wonder there were so many other cyclists about.

I told Mike I’d been sightseeing in Chester the day before. “A lot of the old buildings in Chester aren’t Tudor but Victorian,” Mike said. “The Victorians liked all that historical stuff.” Real or fake Tudor, it was still a nice city to explore. It’s just a shame it’s choked with traffic, and that urban planners past had decided it was a good idea, for example, to build a brutalist multi-storey carpark next to a Roman city wall. 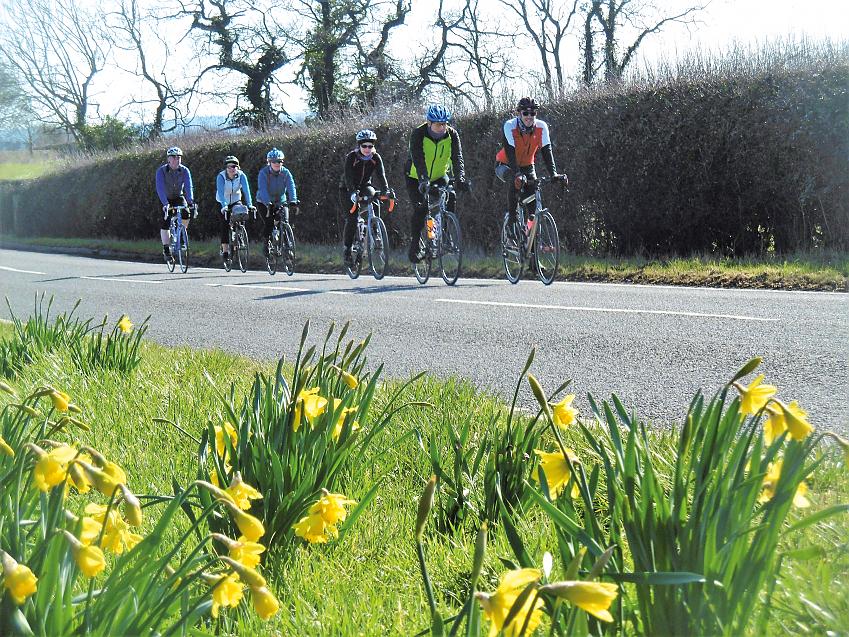 Back at Farndon Community Club, I bumped into Andy Blomfield, the treasurer of Two Mills. He was responsible for the route and had tweaked it days before to avoid the worst of the winter potholes. He said they’d been using the figure-of-eight route since 2014. Before that they’d had one long loop, which required another hall for the lunch stop and more volunteers to run it. Using Farndon for lunch as well as the start and finish was logistically easier. It also meant that riders could easily abandon halfway if the weather worsened, which it did in 2015.

When I mentioned that this year’s event seemed well attended, Andy replied that it was always a popular event for Two Mills – something Janet Gregory confirmed. “This year we had 232 riders registered,” she said, “although there’s always a drop out on the day, which brought us to 218 out on the course. Our youngest was 15-year-old Isabelle Ferguson, who rode the 50km distance. Our oldest riders were 86 (male) and 72 (female), both riding the full 50 miles. In terms of gender balance, it was noticeably better than usual in that 40% of the riders were women. “The event is our main source of funds,” Janet added. “Last year, we used the surplus to subsidise the cost of our newly-designed club jerseys for members. We have also donated to Eastham Centre Cycle Hub, which is a Cycling UK group offering opportunities for local people with disabilities to cycle. And we gave to the Cyclists’ Defence Fund, Sustrans, and local cycle campaign groups.”

The Two Mills Member Group jerseys that Janet referred to were much in evidence in the lunch hall as cyclists tucked into soup, sandwiches, quiche, and cakes – a spread the caterer apparently describes as ‘a standard funeral tea’. Other riders’ jerseys revealed strong contingents from: local road club Marford and Gresford; Liverpool Century; and VC Melyd. There was a wide scattering of other clubs too, along with many unaffiliated riders.

Back over the border

After lunch it was time to head out on the less hilly loop towards Overton. Riders seemed to be more thinly spread for this leg, but before long I found myself riding with Craig from Shotton, who said he was looking forward to RideLondon this summer. He’d had navigation issues too, not through any deficiency in the route sheet but because his GPS-owning riding buddy, who was doing the navigation for both of them, had had to abandon the ride. Near Bangor-on-Dee, while waiting with my camera at the roadside, I spotted a lone cyclist I recognised: it was John from Knutsford again. “I don’t think there’s many behind me,” he said. So I hopped on my bike and joined him to the finish. He told me he’d taken up cycling five years ago, aged 60, and was now a Cycling UK member. He was riding coast-to-coast in July, and before that was planning to do some cycling on the island of Maui in Hawaii. He emailed me afterwards to say thanks for pacing him back to the finish. “I’ll let you know if I manage the climb of Haleakalã volcano in Maui in May,” he wrote. ”It’s a big ask for someone of my age and fitness. I’ll do the downhill ride first – 10 miles to the sea – and see how I feel about it.”

At the finish, I handed over my timing chip (4 hours 18 minutes) to Janet Gregory and picked up my certificate. Hearing my name called, I spotted Mike from Liverpool, whom I'd met in 2010 on a mountain biking holiday in Llanrwst, near Betws-y-Coed, run by CTC Cycling Holidays. We chatted about cycling holidays, tour leaders, and the age profile of club cyclists. There were other familiar faces at the finish: Cycling UK Trustees Welna Bowden (who did the 50km ride) and Janet Atherton (who rode 50 miles); and Mike Blomfield again, who told me that they’d raised £150 in donations at the tea point for the Motor Neurone Disease Association. (Chester and North Wales CTC member Mike Knox had just died, aged 66, after living with the disease for two years.)

I also saw Sue Booth of the Chester Fabulous Ladies. Like me, she’d cycled here from Chester. When I said I wasn’t sure of the best route back, she offered to guide me. Ever the ride leader, she enlivened the short trip with a commentary on the views and local landmarks. For example: “Those houses are owned by the Duke of Westminster. Can you see the W in the brickwork?” Her warnings of “nasty hills” became a running joke after we reached the top of the first one without me realising it. Sue threaded us through the backstreets of Chester to deposit me at the railway station. “Are you coming back in June to do the Bob Clift?” she asked. “I”m organising that.” 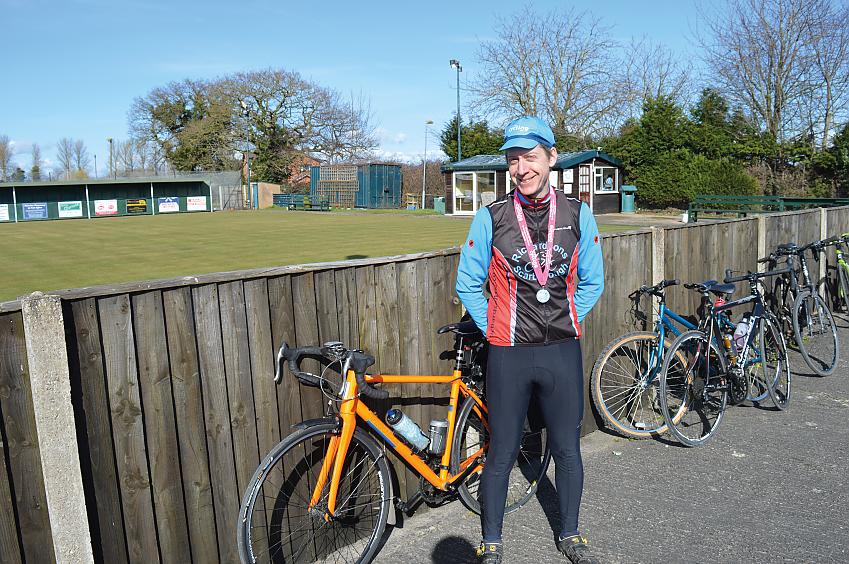 There are still plenty of other Challenge Rides to enjoy this year:
10 June: Ayrshire Explorer 110km

19 August: Tour of the Hills, Surrey

All the Challenge Rides 2018 are in our events listing.

WHERE: A figure of eight loop from Farndon, south of Chester, on the Welsh border. Out to Higher Kinnerton in the morning, then towards Overton and through Bangor-on-Dee in the afternoon.

CONDITIONS: Blue skies and sunny but cool enough for gloves. Mostly on quiet, rolling roads through the Cheshire and North Wales countryside. Some potholes had opened up over the winter, but they were flagged in the instructions.

NEXT TIME I WOULD… Keep moving and not worry about photos. Stopping broke up the rhythm of my ride.