Sam and his favourite road sign, as he makes the crossing from South Uist to Benbecula. Photo Daria Taddei
By Sam Jones
Friday, 29 March 2019

Sea mist lay faintly over the turquoise sea, which lapped at the white sand a short walk from our tent. The early morning sun was hidden but would surely burn its way through the shroud. A glorious day was promised. For the moment, night’s nip was still in the air and I shivered, thankful for my thick Icelandic jumper. Beautiful as it was, this wasn’t a Greek or Caribbean island but Vatersay in the Outer Hebrides – as both the temperature and the Highland cow peering incuriously up at us from the shore testified.

My girlfriend Daria and I had rolled off the ferry from Oban to Castlebay in Barra the previous evening, along with about 30 other cyclists. While some had made their way to B&Bs in Castlebay, D and I headed south, past Vatersay’s small graveyard with its crop of fresh stones, to camp above the beach of Bagh a’Deas.

Pitching our tent in the light rain that had accompanied us since our ferry entered the Hebridean Sea, we wondered whether it was such a good idea to cycle tour in the Western Isles at the beginning of May! But as I sat looking out from the tent the next morning, the mist lifted. The sea was cerulean, the beach pristine. 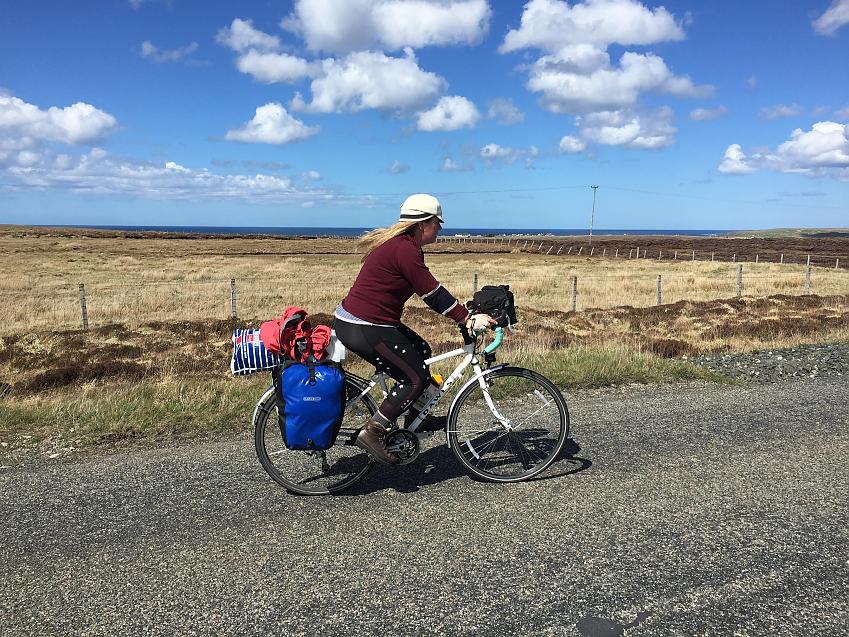 Daria on the final furlong to the Butt of Lewis. Photo Sam Jones

Call of the wild

Barra is small – only 27 square miles and easily rideable in a day. Coupled with Vatersay, it’s a magical introduction to theWestern Isles, with charms a-plenty for the visitor. Sadly, whether it is locals, tourism, or just detritus blown in off the sea, the natural beauty is spoilt by the rubbish that lines most of the islands’ roads.

Despite this, the Western Isles are famous for their bountiful wildlife. Riding along the bays and lochs you see seals and countless oystercatchers, red beaks busy, their warbling call seldom out of earshot. But for me the main attraction on this trip was the chance to see an otter in the wild.

Though their numbers are now increasing, following the hunting ban and the cleaning up of our polluted waterways, these elusive animals remain rare. The Western Isles, however, are home to the UK’s densest population of otters… Surely I’d have a chance to see at least one? Waiting for our ferry to Eriskay, my wish was granted.

This terminal is a well-known location for otter watching. Early morning and late evening are the best times. I was lucky, given that it was the afternoon, to catch the briefest of glimpse of brown silk slipping across the seaweed encrusted rocks before the otter slithered into the small bay. After more than 30 years of looking, I’ll take this sighting with glee and thanks!

After the delights of Barra, with its diverse hilly landscape and white beaches, the empty moorlands of the Uists and Benbecula left us a little flat – just like the islands themselves. The causeways that link these three islands make the visit worthwhile – and it’s not just that they’re bookended with the best road signs I’ve ever seen to warn of crossing otters. On a sunny day it can feel like you’re cycling across the sea, and on a wet and wild day you’re glad to be on dry(ish) land.

We wild-camped on a mound jutting out of the marsh halfway up South Uist, and were glad on the second evening to find Balranald campsite on North Uist next to the RSPB centre. The winds grew mighty fierce overnight, with gusts over 50mph. Sheltered by our Nordisk tent, we lay warm and dry, kept awake by the tempest outside.

By morning, the only thing that had changed was the light. Porridge and tea were consumed hastily within our porch. Then we packed and headed off in hope that the seas would not be too rough to prevent passage to Harris. As it turned out, we shouldn’t have worried about the sea swell but rather the northerly wind. It’s exhilarating to have a tailwind, but as the road turned west along North Uist’s shoreline, fierce crosswinds blasted us across the (fortunately empty) road.

We reached the ferry at Berneray without mishap and sought shelter in the dark terminal with other damp travellers. Through the rainlashed window, we saw our ferry battle through the waves to the jetty. 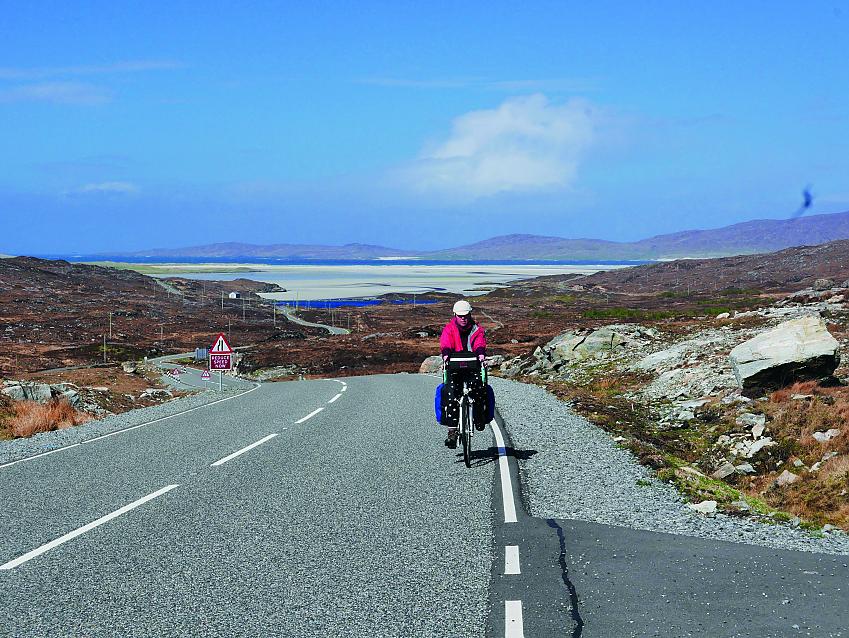 Daria rides up from the Sands of Luskentyre in West Harris over into East Harris. Photo Sam Jones

On the other side of the Sound of Harris, the weather was completely different. The sun shone through the clouds, and a light breeze accompanied us along the western road to the sands of Luskentyre.

Luskentyre is a breathtaking sight. It’s understandably many visitors’ highlight of Harris. Riding by we could see dog walkers and cockle pickers following the tide as the blue-green waters flowed out to Taransay, leaving white sands shimmering in the afternoon sunlight. Following the road round the bay to the cemetery, passing croft after croft, in all but one the looms that produced the world famous tweed now lay silent.

Though the view to Taransay is spectacular, our minds were elsewhere. We had hunted all the while, looking for a dry spot to set up our tent. With nothing but bog or sand, we had to backtrack eight miles to a campsite at Horgabost.

Harris is mountainous and so feels far wilder than the flatlands of the Uists. Wanting to make the most of this landscape, we took a detour on the way to Tarbert via the Golden Road. Named for the reputed cost of blasting a road through the Lewisian Gneiss-wrought landscape, the Golden Road treats you too an eight-mile wonder of undulating cycling, with lochs, sea views and smallholdings – and also the Harris Tweed Company in Grosebay, which is well worth a visit.

Harris was where we’d planned our one night under a roof – at Ardhasaig House, up the road from Tarbert. We had wanted to spoil ourselves but in the end were disappointed, getting a worse night’s sleep and feed than when we'd wild camped.

That set us up poorly for the one significant climb on our trip. Harris and Lewis are one island, separated by mountains not sea. The climb between them is long, but only arduous for 500m over an incline of 15% that greets you as you emerge from a rock cutting. Perfectly manageable – unless a wall of wind stops you dead in your tracks like it did us! Communication impossible over the gusts, progress slow, we inched up to the summit and then zipped down the hairpins into Lewis.

Spoilt with a view of glistening lochs and rugged mountains all around, the grins on our faces at the bottom showed it was worth it.

Leaving the Harris mountains and sunshine behind, we headed west into the wind and drizzle towards the standing stones at Callanish. It was a proper downpour when we arrived, and the visitor café kindly let us set up our tent in their sodden garden, adding: “So long as you don’t mind gawping visitors in the morning!”

We didn’t, and were soon in the dry, cooking up some pasta, wondering what the ancient stones might look like.

Suddenly the pitter-patter on the tent stopped. I poked my head out of the fly and saw the birth of a post-storm sunset bathing the land in a golden light as thick as syrup. I roused D from the warmth of my sleeping bag and we raced up the hill to the standing stones, which are older than Stonehenge. For a good quarter of an hour we basked in that special auburn glow: the sight and moment was ours alone.

The gawping began early the following morning, so we didn’t linger; our plan was to reach the Butt of Lewis that day. Racing through north Lewis, I found the bleak landscape disappointing. It’s barren, and the road’s ups and downs through the machair (Gaelic for ‘low-lying grassy plain’) from Barvas to the Butt of Lewis sapped our legs, even as our desire to reach journey’s end drove us on.

At every summit, our eyes scanned the horizon, looking for the loan pinnacle of the lighthouse built by Robert Louis Stevenson’s family in the 1860s. Finally we found it at the end of a wide track, surrounded only by sea cliffs and sheep. Perched on a rocky outcrop, we gazed off into the ocean until the sun settled beneath the horizon, and the great lamps began their sweeping circuits of the waves.

We knew we had a long and thirsty journey to Stornaway the following day. All the shops would be closed on Sunday and our water supplies were running low, but none of this mattered. Daria and I had reached the end of the world together. Our journey, for now, was complete. 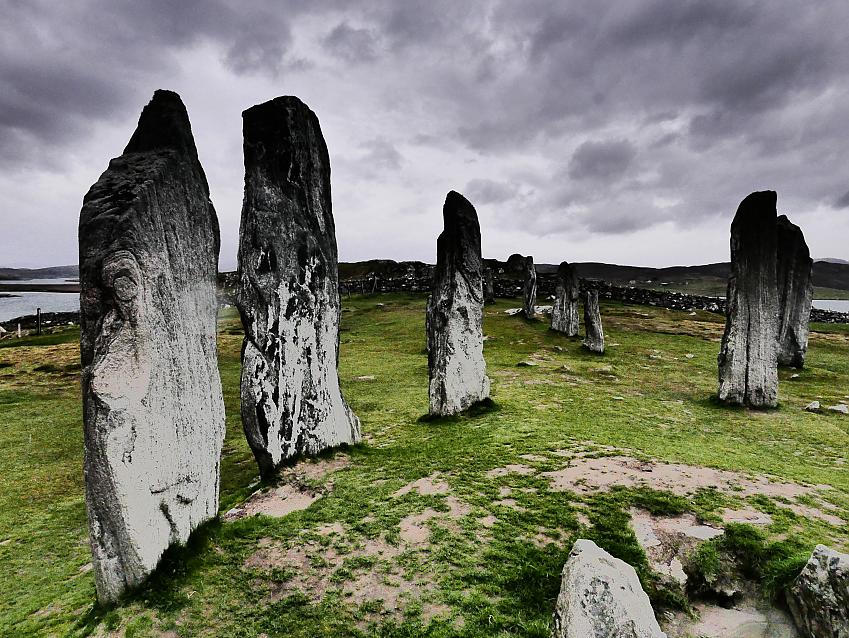 Route: From the ferry at Barra, turn left, ride to Vatersay, and keep going until you reach the sea. Then turn around and follow the roads and your compass north, taking ferries as need be, until you can go no further!

Conditions: Changeable. Expect four seasons in one day. Roads surfaces are fantastic and traffic (in May) light – expect more in summer.

Accommodation: Mainly wild camped, occasional campsite, and one night in a B&B.

I’m glad I had… Jöttnar Hymir waterproof smock, Nordisk Oppland 3 SI tent – and Daria joining me for the journey!

Next time I would… Take more time and my walking boots. There are some great walks, especially on Harris. Visit Scotland’s most westerly distillery at Abhainn Dearg, Lewis.

With prevailing south-westerly winds, the best way to cycle the Hebridean Way is south to north.

The best way to reach Oban is either cycling or public transport.

You can leave your car in Oban, but then you’ll have to get back to it! We took the Caledonian Sleeper from London Euston to Glasgow, and then a train from Glasgow to Oban (scotrail.co.uk, call 0344 811 0141 to reserve cycles).

Cycle booking in advance on both is highly recommended.

For the return, we took the sleeper from Inverness to Euston.

You can cycle to Inverness from Ullapool (A835, 57.5miles) or, as we did, take the Highland Bike Bus. Bike carriage isn’t guaranteed on other buses.

The sands of Luskentyre and the Golden Road, Isle of Harris View

Cycle Magazine, April / May 2019 View
Cycling UK continues to support the UK to cycle
This remains true during this difficult period with the ongoing threat of coronavirus Covid-19
Read our latest advice on cycling