Looking towards the famous Forth Rail Bridge
By Sam Waller
Tuesday, 2 July 2019

Anna Hughes and her friend Jude cycled coast to coast across Scotland, spending less than £40 each – including travel to and from London

We stand on the Forth Road Bridge, looking down the Firth of Forth in the direction of the open sea, the wind tugging at our hair. The Fife coast curves away into the distance, hazy with the early suggestion of summer, and in the foreground is the iconic Forth Rail Bridge. The bridge-scape has changed since I was last here; behind us stands the new, impressive Queensferry Crossing, a cablestayed bridge six years in the making, leaving the bridge we’re on quiet of traffic save for the occasional cyclist and bus.

Several weeks before, I’d emailed Jude with an idea. Both bridge enthusiasts, we’d been talking about coming up to see the new Queensferry Crossing for some time. I suggested we start in Edinburgh and cycle out to the bridge, then continue onwards to Glasgow along the Forth and Clyde Canal, satisfying my obsession with waterways and ticking off the iconic Falkirk Wheel. Forth to Clyde, city to city, coast to coast: my favourite type of ride, to follow a single trajectory until you can ride no further. 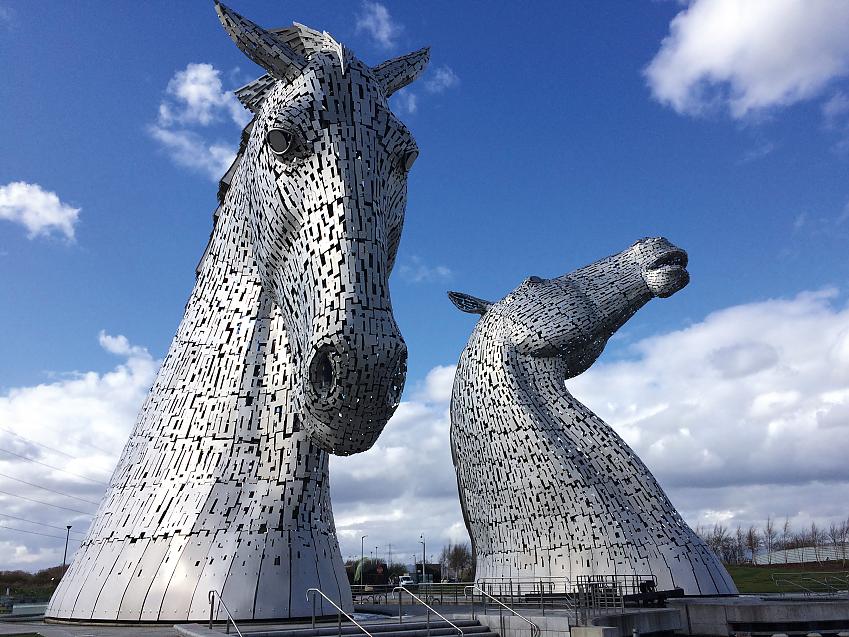 The Kelpies stand by the Forth and Clyde Canal

"How about we take the coach? I simply cannot afford the train," I wrote. An overnight ticket from London to Edinburgh cost as little as £9. Adventure for less than a tenner! "The snag is that we can’t take our bikes on the coach. I can potentially borrow my brother-inlaw’s Brompton," I said.

A bridge almost too far

The fresh air plays about our faces as we stand there on the bridge, carrying with it the faint scent of the sea. Around four hours ago our coach arrived in Scotland’s capital. Despite having only had snatches of sleep as we rumbled up the A1, we are buzzing. (The ride out of Edinburgh, along a disused railway line then around the expansive Dalmeny Estate, was a delight.) We freewheel away from the bridge. Having escaped the clutches of London, we now have open skies and new adventures for the next two days.

Yet by the time we arrive at our next bridge, at Kincardine, we are less chirpy. It’s been an industrial, hilly, and windy 30 miles, and we’re cursing our silly little wheels and the fact that, despite both being experienced tourers, we didn’t factor the prevailing wind into our plan. We should have known that east to west is the wrong way around. But Jude did JOGLE this way so she’s hard enough, and it was my idea so I put up with it. 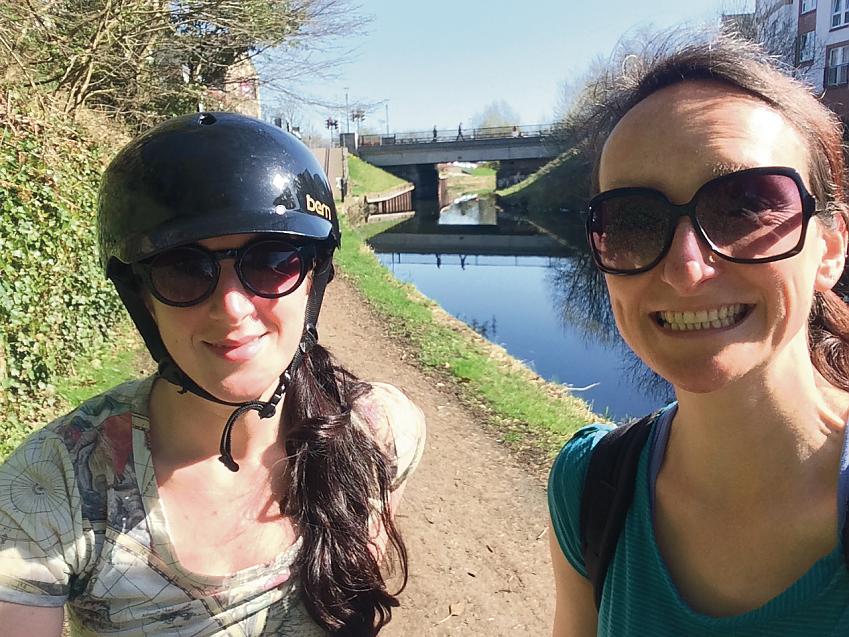 Anna and Jude on their folding bike adventure

There’s a tea shop at the Kelpies so we pause to re-energise, as these strange gigantic metal horse head structures bray silently into the gusts. They stand guard at the entrance to the next phase of our adventure: the Forth and Clyde Canal. We secure the map’s wind-flapped corners with our mugs of tea – as Ordnance Survey Champions, we thought it fitting to manage without GPS – and my heart sinks as I work out the distance to our accommodation: 20 further miles. Onwards we forge.

The usually still water of the canal is choppy. After four tough miles we reach the Falkirk Wheel, which is as intriguing and impressive as we had expected. Eleven traditional locks once stood in its place, but when the canal underwent restoration in the early 2000s this was the design that replaced them, a vast rotating arm that moves a trough of water from one level to the other. The last rotation of the day begins as we prepare to leave. We watch, awed into silence.

The extra miles are suddenly worth it as we roll exhausted into Kirkintilloch. Our hosts, Robert and Pauline, offer showers, comfy beds, and an invitation to join the family evening meal, a vegan feast. We found them through Warmshowers, an international community that offers free reciprocal hospitality. I’ve been a member for many years, having received guests and been a guest myself many times.

The new day is sunny and windless, and we set off rested and revitalised, looking with fresh eyes upon the landscape. This is pure Scotland, the hills and fells to our right brushed with heather and peaked with a lingering snow, giving a sense of the mountains and lochs that lie beyond to the north. Buzzards hang in the air above, and on one bank a heron stands still as stone.

Towards the western end of the canal a flight of locks appears, allowing boats to step downhill. For the cyclist it’s a gradual descent, with another lock every mile or so lowering the waterway yet further on its journey back to sea level. And eventually we are there, at Bowling, where the canal ends in a pretty little basin. On the other side of the sea lock, there’s the wide open Clyde. It’s a popular location, with a café, bike shop and picnic area. Yachts sit quietly on their moorings, masts swaying gently. 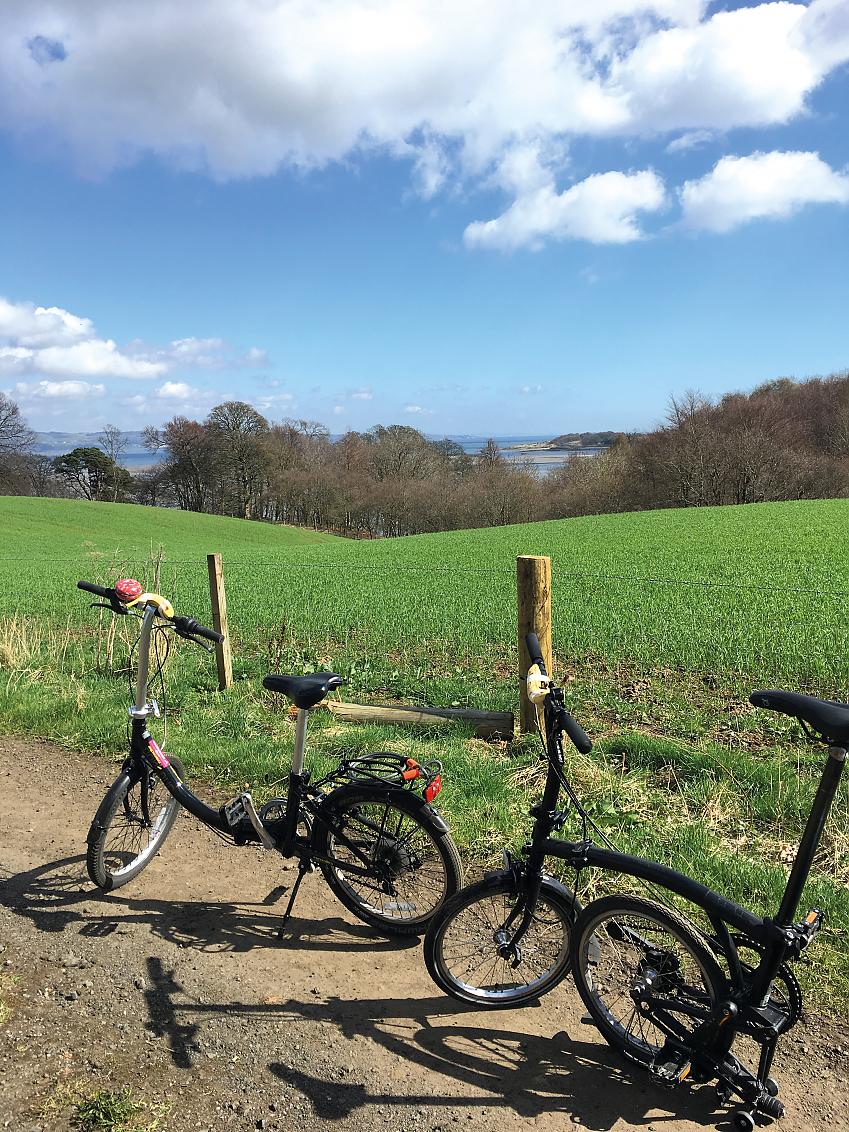 The unsurfaced sections were fine in the dry

From there it’s a short ride back along the towpath before cutting down an old railway line that once connected Glasgow to the docks at Clydebank. The Clyde remains wide and industrial as we draw closer to the city, the water calm today. The steep streets of Glasgow appear, lined with Gothic buildings.

We fold our bikes for the final time and recline on the grass in George Square. Tonight we will lodge with a friend, and tomorrow we will take the long return coach journey back to London. Though our ride was hard in parts, we’re proud of our bikes for facilitating our adventure, enabling us to visit somewhere far enough away to feel exotic, and allowing us to do it so cheaply. Well done, Brompton. I might just take you out again.

Anna Hughes is the author of Eat, Sleep, Cycle and Pedal Power.

The National Express conditions of carriage state they won’t take ‘bicycles which are not folded, or dismantled and wrapped.’ There is an implication bikes might be refused if there is not space in the hold, but the driver was helpful and loaded them without fuss. The main concern is covering the chain. Jude’s bike went into an Ikea bag. I hadn’t brought anything – luckily the driver had a bin bag. Visit nationalexpress.com/en/help/luggage for more information. For a more comfortable (and costly) journey, Caledonian Sleeper runs overnight trains to Edinburgh and Glasgow from London. Bike transit is easy, as long as you book in advance, and a good night’s sleep can be had on a bunk bed.

Conditions: Mixture of tarmac and trail, packed gravel and some grass or paved stretches. Most suitable for hybrid/mountain bikes. Can be muddy in the rain.

I'm glad I had... Packed a lunch, which was a lifesaver mid-ride as there were no shops to speak of.

Next time I would... Ride from west to east, and at Grangemouth take the southern part of the Round the Forth route – fewer miles and possibly nicer!