The views at Lifford, County Donegal, were spectacular

A sudden downpour made me dash for the nearest tree for cover. Through the noise of the rain I heard a man in a nearby doorway shouting. “Come and shelter in the house!” he was saying. I made a dash for it. He asked where I was going, so I told him the name of my B&B. “It’s 300 metres up the road. I’ll phone them to tell them you’re here,” he replied.

When the rain eased, I plodded up to Cullentra B&B. Olive, the owner, wasted no time in getting me to strip off, put everything in the washing machine, and jump into a hot bath. I was in no mood to argue.

I’d left the ferry terminal at Larne that morning in good spirits, cycling along the Antrim coast. We’d had the driest summer in Scotland since records began so rain hadn’t occurred to me, even though my Irish experiences have always included it.

I had plenty of time to enjoy the scenery, taking a minor road that runs through Carncastle and Glenarm. It’s slightly inland from the A2 main road and has super views of the sea. My destination was Cushendall, a picturesque seaside town. The heavens had opened as I approached it.

It was still raining in the evening. Olive offered to drive me into the village for a meal; the B&B is a couple of miles from it. I was glad for the lift and had a lovely meal and, of course, a pint of Guinness – which always tastes better in Ireland!

In the morning, with a full set of dry clothes, I set off along the peaceful Glendun Scenic Route to Ballymoney. The town isn’t named after cash; money is an anglicisation of the Gaelic word monaidh (‘moor’), which I’d passed over to get there.

I went to Ballymoney to see a suspension bridge over the railway, which was built in 2012 to take a footpath and cycle route across the Belfast-Derry line, avoiding a level crossing. It’s an impressive bridge, having a snaking 230-metre deck suspended from a giant steel parabolic arch. Good to see the Northern Ireland Assembly taking cycle routes so seriously.

From Ballymoney my next stop was Derry, also known as Londonderry. The Art House B&B on Lawrence Hill is a pair of Victorian brick townhouses, lovingly restored by their new owner. For me the attraction was being able to use the kitchen, which enabled me to chat to some of the regulars who stay there during the week when working at the nearby hospital.

I left Derry on a minor road leading to the border with the Republic at a hamlet called Soppog. There had been much talk of the status of the border post-Brexit. Hard border, soft border, and protocol were all well-used words in the media. As I approached, I wondered what I’d find, recalling the The Troubles when the border could be difficult to cross.

No problem. The only signs of a border were a different shade of tarmac and a small sign indicating the speed limit in kilometres per hour. I was in County Donegal. I freewheeled down to Buncrana, where a car ferry took me across Lough Swilly.

I needed my certificate of vaccination to get into a café, but luckily I had researched that and wasn’t caught out. (Do check before travelling, in case the rules have changed again.)

Delightful, traffic-free minor roads led me through places with charming names like Coolboy towards Letterkenny. I’d booked a room at a B&B in Ballymacool. It was another place where guests could use the kitchen. 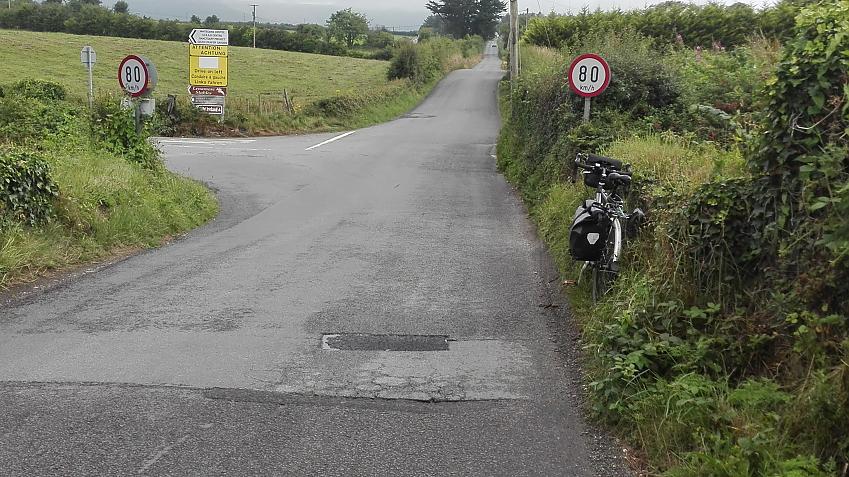 Border crossings, like this one in County Donegal, were easy despite post-Brexit changes

The first surprise was an electric cable coming in through the kitchen window. The second was finding lots of unlabelled cans of beer in the fridge. Puzzle two was solved when the owner came home from work. He worked at a brewery and the cans of beer were rejects, as they’d been dented. We could help ourselves.

A Belgian couple staying at the B&B solved puzzle number one: they’d travelled in an electric car from Belgium and were charging it. They were happy to join in the unexpected beer-fest, and we all recharged our own batteries with the Irish hospitality offered to us.

The minor road from Letterkenny to Castlederg in County Tyrone took me over the border again. A number of times, in fact. The border was created relatively recently through the Anglo-Irish Treaty of 1921, which led to the creation of Northern Ireland.

The only way I knew which country I was in was the style of road markings and the metric or imperial speed limit signs. No stops, no checks, nothing. My phone sometimes showed Vodafone UK when I was in the Republic and Vodafone IE when I was in Northern Ireland.

Castlederg had a fantastic Greek restaurant, and also an ex-RUC station that was up for sale. It would make a good film set, I thought. 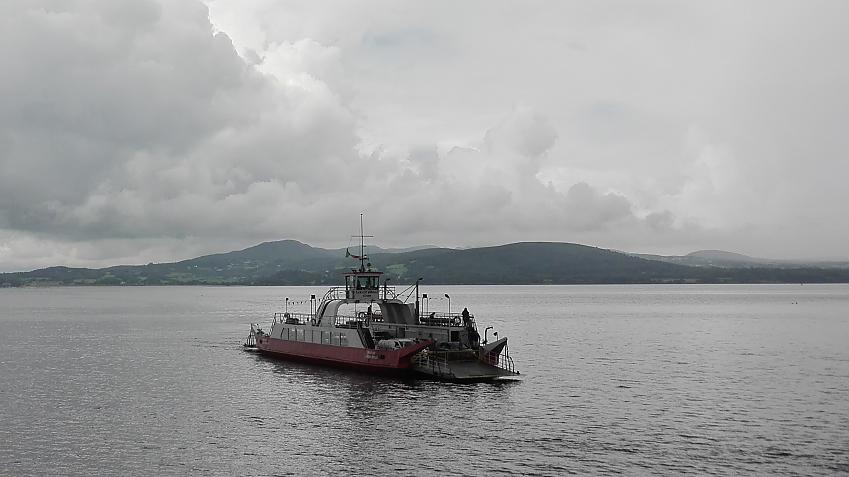 The car ferry on Lough Swilly

After a night in the Derg Arms Hotel, I crossed the border another half-dozen or so times to get to Lifford, County Donegal. Vodafone was still confused as to which country I was in. I cycled past Deeleview B&B without seeing the sign. Fortunately, Seamus the owner was looking out for me and chased after me in his car so I didn’t go too far out of my way. What a welcome!

From Lifford a disused railway follows the Foyle northwards. Derelict and overgrown in the Republic, in Northern Ireland it becomes a marvellous cycleway. It took me neatly to Waterside Railway Station and the train to Belfast. No cycle reservations are needed on NIR, so I boarded the next train and sat back to enjoy the views of the Foyle estuary and the coast.

After a night in Belfast I headed for the Stena Line ferry to Cairnryan. Don’t rely on Google Maps to cycle to the Stena terminal in Belfast docks: some roads are only permissible to HGVs! It was, at least, easy to ride the bike onto the ferry and take it to a place for safe keeping – a contrast to my outward experience on P&O, where I had to cram my bike into a little van to get from the terminal to the ship.

Despite the rain, it was a wonderful trip.

Do it yourself: Ferries to Northern Ireland

Cairnryan to Larne with P&O cost £47 one way for me and the bike. Journey time two hours, sailings every four hours. Unfortunately, you aren’t allowed to wheel your bike onto the ferry. I had to remove the panniers and wheels to squeeze it into a small van to take it and me onto the ferry.

Belfast to Cairnryan with Stena Line was £36 one way for me and the bike. Journey time two-and-a-half hours, sailings every four hours. Cycling onto the lorry deck was easy, and I stowed the bike in a small cabin.

Liverpool to Belfast with Stena Line costs £34 one way for one person and a bike; a cabin is extra. Journey time eight hours, two daily sailings.

Where: Northern Ireland and the Republic of Ireland

Route: From Larne west along the coast into Donegal, then back through Tyrone to Derry/Londonderry for the train to Belfast.

Conditions: Quiet minor roads. In Ireland it rains on many days but not all day.

I’m glad I had: Good waterproofs!

Next time I would: Check the distance from my hotel to the Stena Line Belfast terminal. It was tight!