Spend £2k on an endurance road bike and you can expect carbon fibre. Liz Colebrook tests women’s specific models from Decathlon and Cube

Both of these road bikes are designed for women. The Van Rysel is also designed by women. Whether women need a women’s specific bike is a moot point. The last time I reviewed one, the women’s-specific aspect amounted to a change of handlebar, saddle, and colour. I was curious what differences these two would exhibit.

They’re both ‘endurance’ road bikes. The industry is always inventing new names but I like ‘endurance’; it’s more obvious than ‘sportive’. Essentially, such bikes are designed to offer more comfort without compromising much on the aerodynamics and weight. So you can expect a slightly higher handlebar position, lightweight wheels, and a super-light, shortwheelbase frameset. 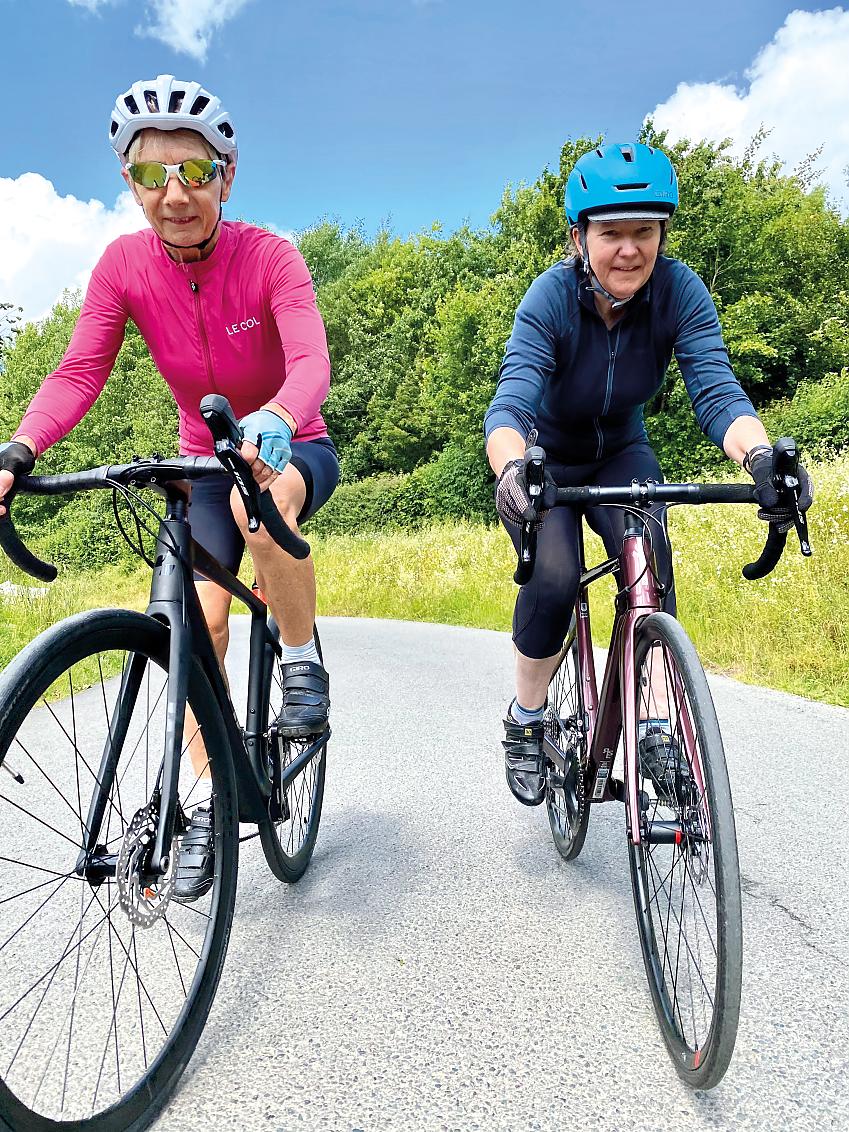 First look: The Cube (left) has nice details such as smaller levers and down tube protection and takes mudguards too. The Van Rysel (right) is lightweight and sporty for a ‘budget’ carbon bike, thanks largely to its lighter wheelset

Cube’s Axial WS GTC Pro (£2,049) is one of six women’s-specific road bikes designed by the German brand. As with Van Rysel, the less expensive models – such as the entry-level Axial WS (£949) – are aluminium rather than carbon.

Carbon frames can fracture dramatically in a collision where an aluminium or steel frame would crumple or bend. But in the normal course of events, where the stresses are predictable, a carbon frame and fork can have a better strength-to-weight ratio than any metal frame yet still dissipate some road vibration. This (potential) combination of performance and comfort helps explain why carbon fibre is the dominant material for higher-end road bikes – including endurance ones. 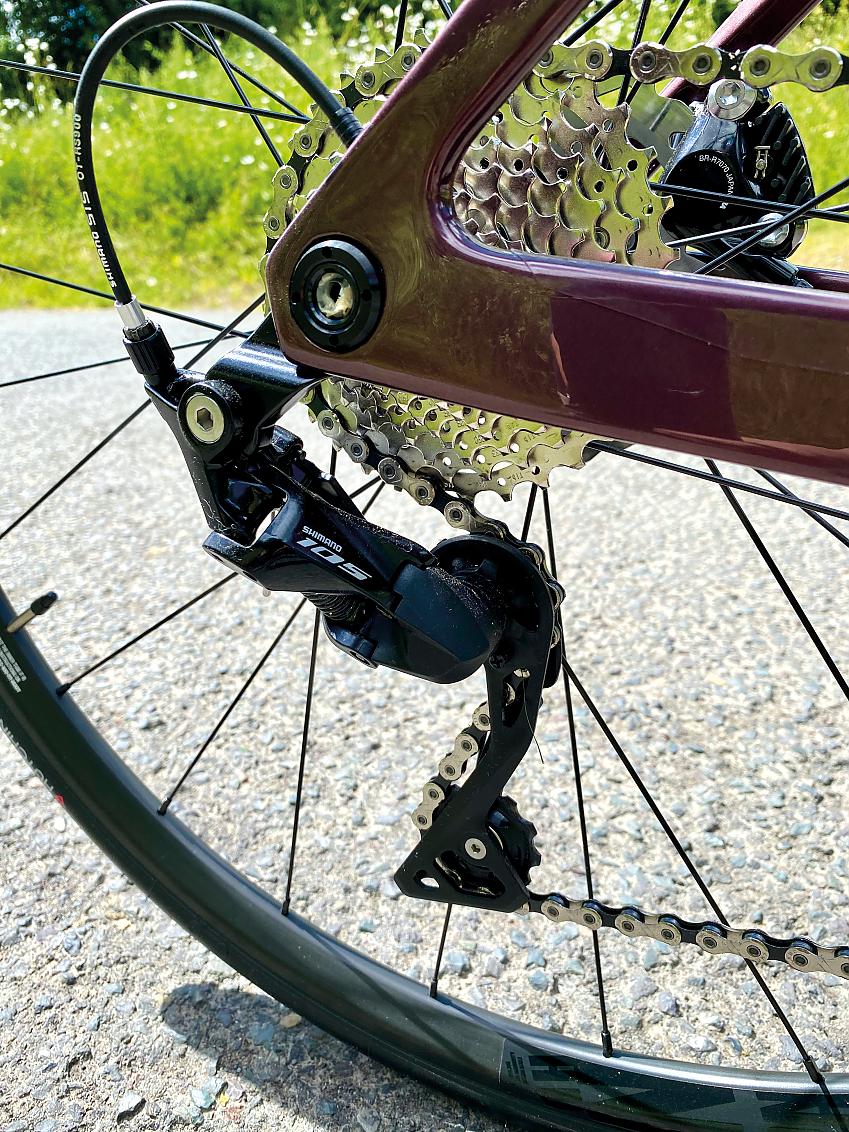 An 11-32 cassette on the Van Rysel is fine, given the bike’s low weight

Both the Cube Axial and the Decathlon Van Rysel feature a full carbon frame and fork. The Cube is a kilogram heavier overall than the Van Rysel, mostly due to variances in the wheels rather than the frames. The other significant difference is the sizing availability: the Van Rysel seems only to be stocked in XS and S sizes (although XXS is listed), whereas the Cube is offered in a full range of sizes. This may be a result of production problems stemming from recent upsets in global manufacturing and transportation.

The Cube has a wide protective strip under the down tube to limit potential damage to the frame from stones flying up from the road. It’s a small but important detail on a carbon bike. Meanwhile, Decathlon helpfully provides an Allen key torque wrench with the bike so you can tighten any bolts that clamp onto carbon – such as the stem – just right.

Neither bike is designed for conventional frame-fitting mudguards. The Cube can be equipped with the brand’s Cubeguard Attain Disc guards, while the Van Rysel would require SKS Raceblade Long or Crud Roadracer guards. 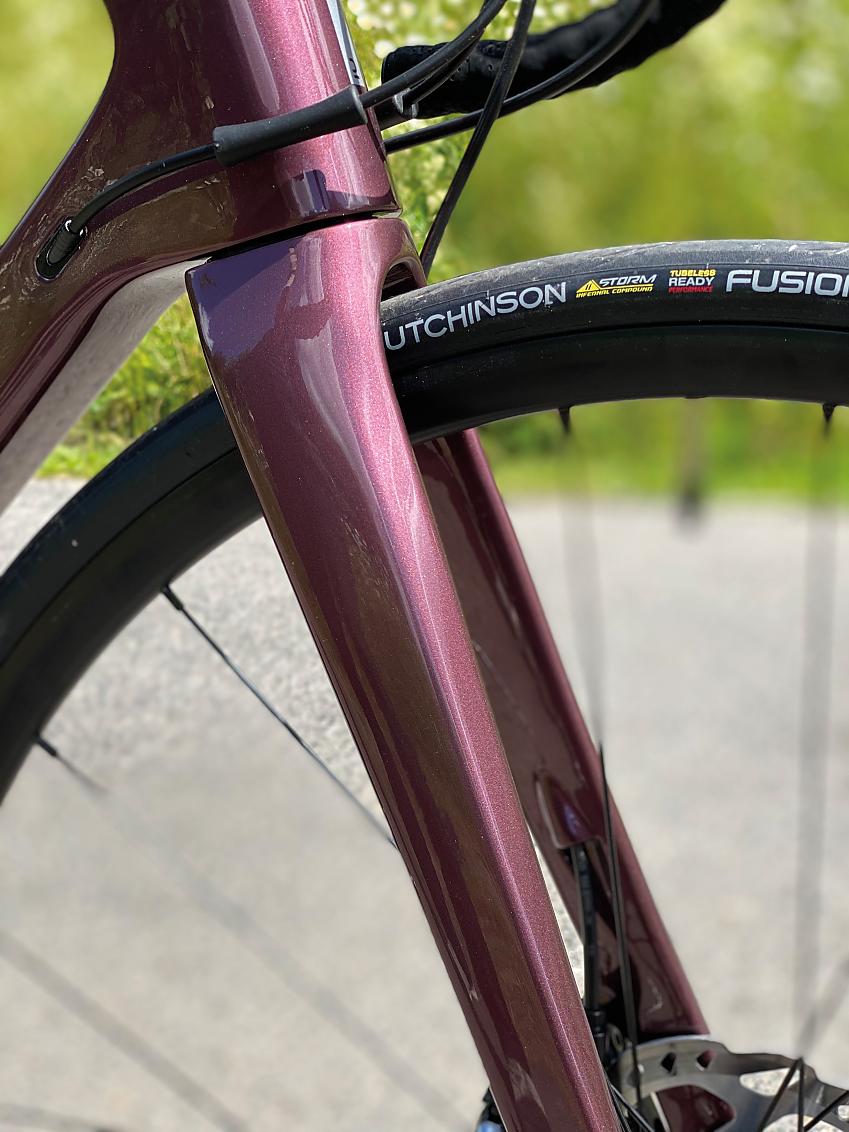 The full carbon fork on the Van Rysel underscores the brand's sporty aspirations: it won’t take a conventional mudguard or a tyre bigger than 25mm

Both bikes feature Shimano’s 105 groupset but the spec isn’t identical. The Van Rysel has a 140mm rear disc rotor, which makes sense for small-to-medium riders and saves weight. The Cube employs Shimano’s hydraulic 105 brake levers for smaller hands – commendable on a women’s-specific bike.

The extra cost of the Van Rysel is down to its pricier, lighter wheelset. I would always advocate spending money on wheels and tyres if you have the funds to upgrade. A good pair of wheels is as important as the frame and fundamental to a bicycle’s performance. 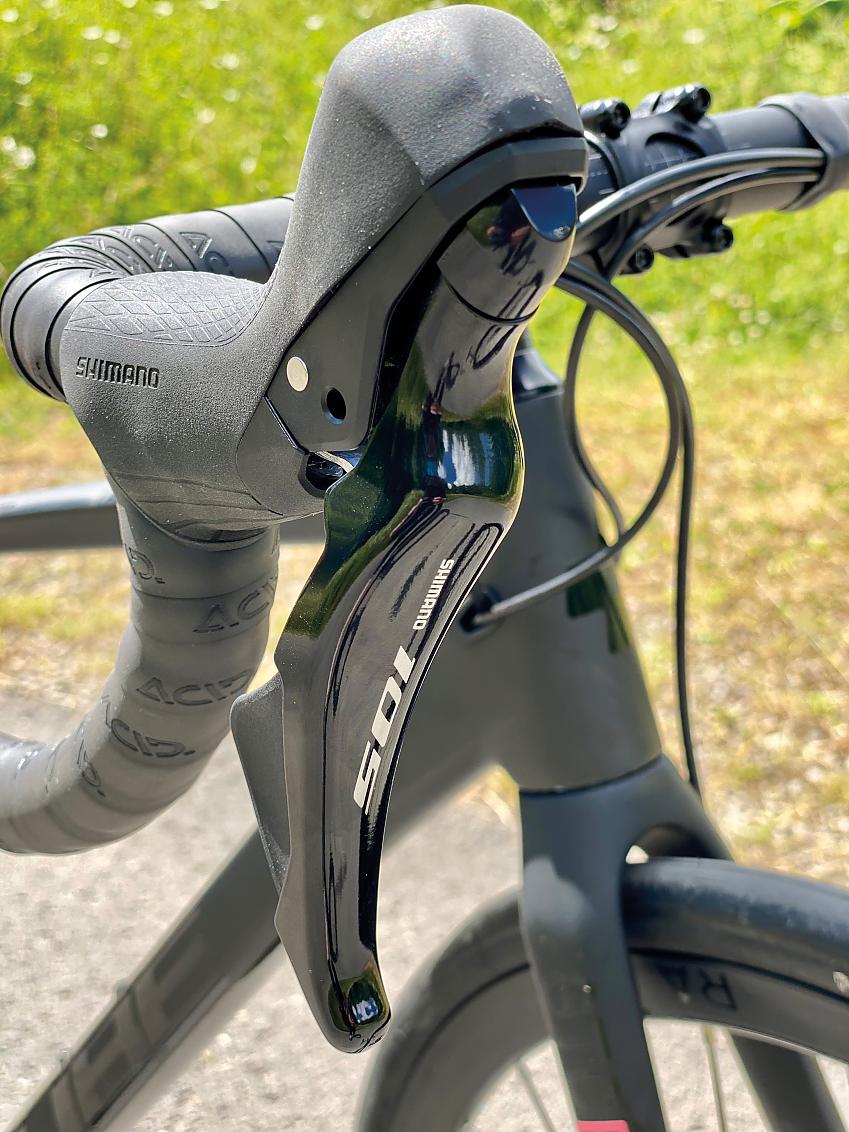 A nice flattened lever profile on the Cube provides sure-fingered braking. The levers are shorter-reach as well

When it comes to gearing, I seldom use a compact double’s 50t outer ring. I prefer a 1×11 setup on my own bikes. Living in hilly Shropshire, I descend quite fast enough already without pedalling downhill to add any extra speed. But these are road bikes and big chainrings go with the marketing territory, unfortunately.

Key to comfort for me is the handlebar setup. Happily both Decathlon and Cube offer a size-specific bar width and stem length. They also provide chainsets with shorter crank arms on smaller models, which is just as it should be (but hasn’t always been the case). The shorter you are, the more important it is to employ a shorter crank arm. Apart from giving a better fit, it’s kinder to your knees and makes it easier to pedal efficiently. 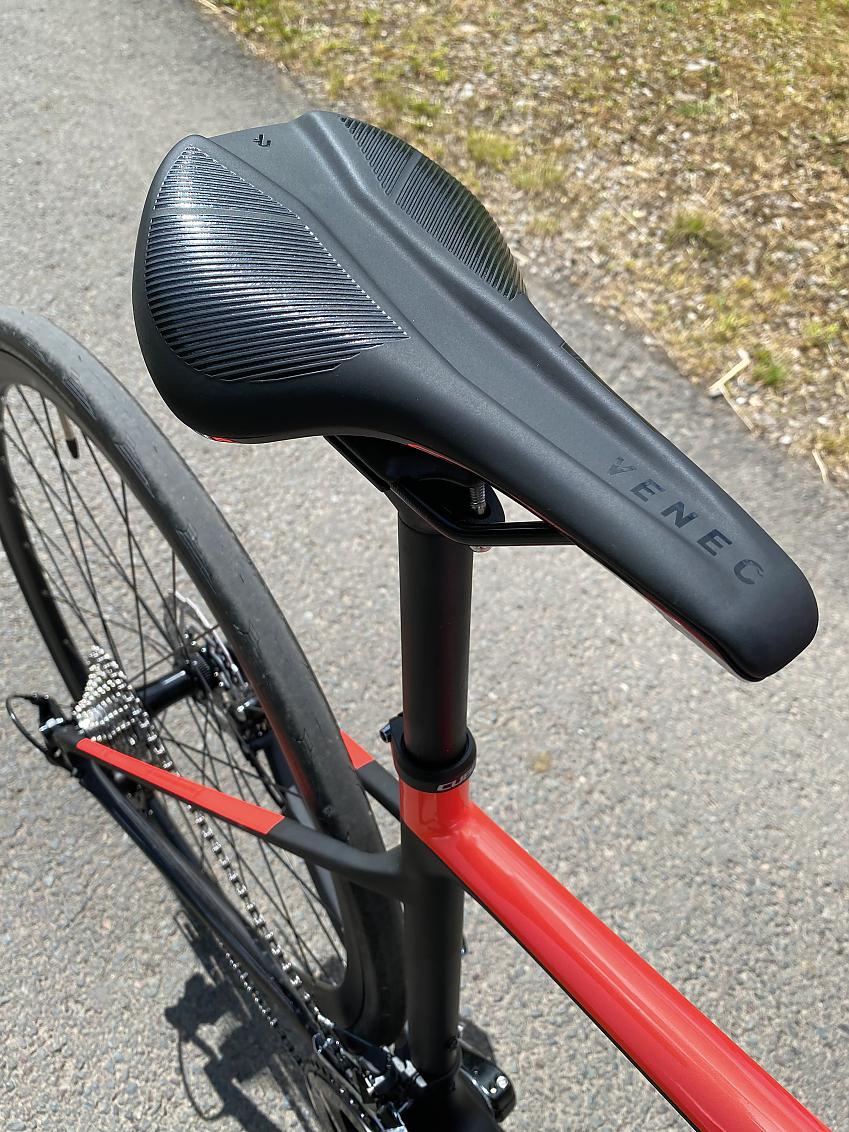 The patchwork state of our roads is a challenge for the endurance bike designer, who has to think hard about how best to iron out the lumps and bumps. Wider, compliant tyres are a no-brainer, however, and both come with tubeless-ready ones – 25mm tyres for the Van Rysel, 28mm for the Cube. 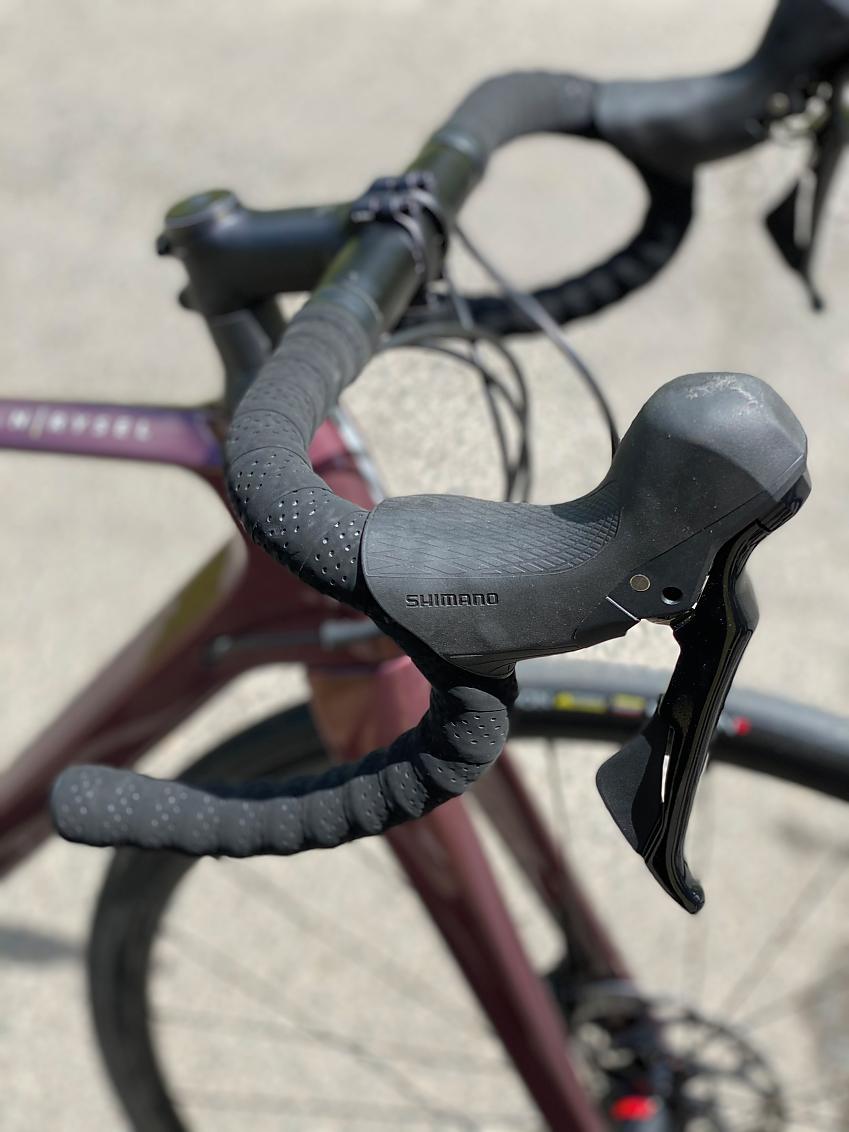 My first impression of the Van Rysel was how smooth and quiet it felt. It’s comfortable and has just the right degree of responsiveness. I didn’t have to keep adjusting my riding line, which you sometimes have to do if you’re busy looking over hedges at the passing countryside.

One factor that isn’t spoken about much is ‘wheel flop’. When you hear talk of how a bike handles, there are several forces at play, ranging from the rider's position over the handlebar to the offset of the fork, the tyre size and the frame’s head angle. Wheel flop is the physics of how ‘keen’ a wheel is to naturally tip to the left or right as it begins to move away from the mid-line. The Van Rysel has a wheel flop of 15mm, the Cube 19mm. This meant slightly more adjustment of my riding line on the Cube than the Van Rysel. Over a longer ride, that would mean slightly more upper body work for the rider of the Cube than the Van Rysel. 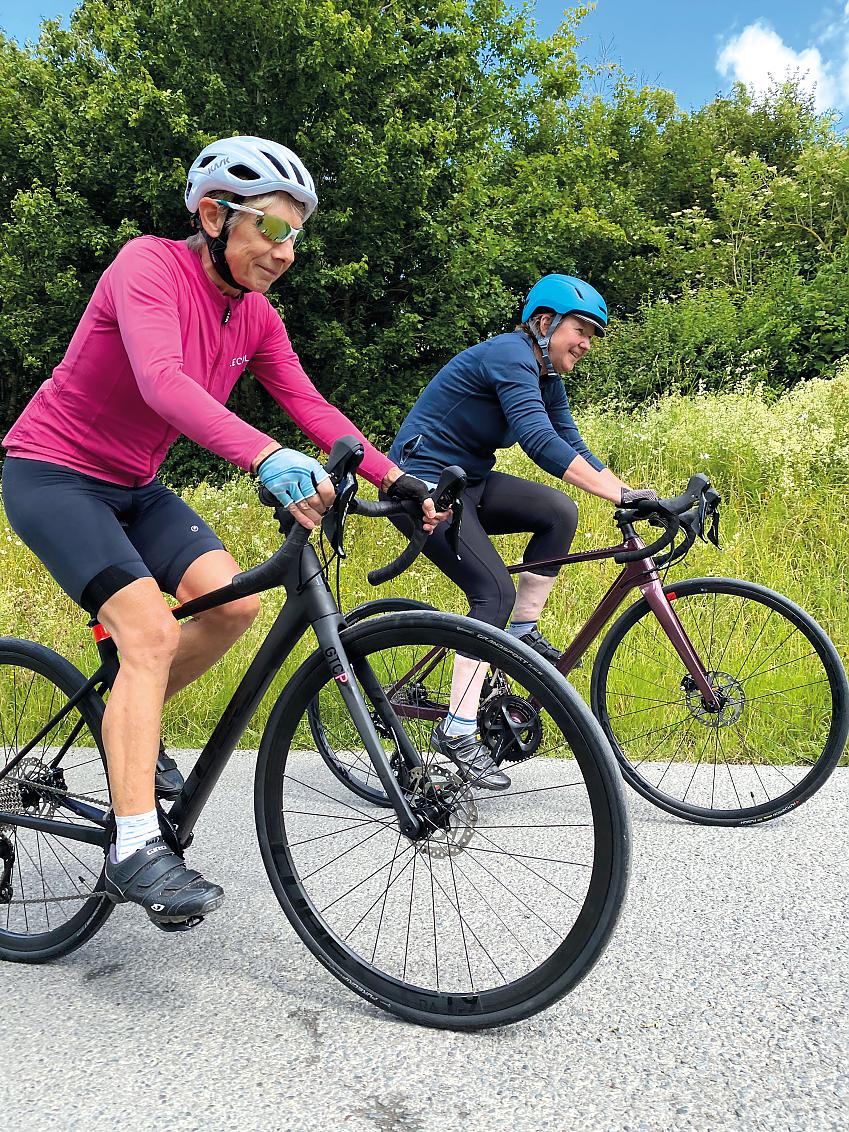 At 8.2kg the Van Rysel is lightweight for a disc brake bike. I appreciated that in hilly south Shropshire, where I could climb relatively effortlessly without running out of gears. Although the handlebar puts you in a nice tucked aero position for descents, I would sacrifice that for a slightly flared bar with a flat top – also known as a ‘wing’ handlebar. This would spread the weight on my palms when riding on the tops. I'd also re-wrap the bars with a quality gel bar tape. Contact points really matter on long rides. 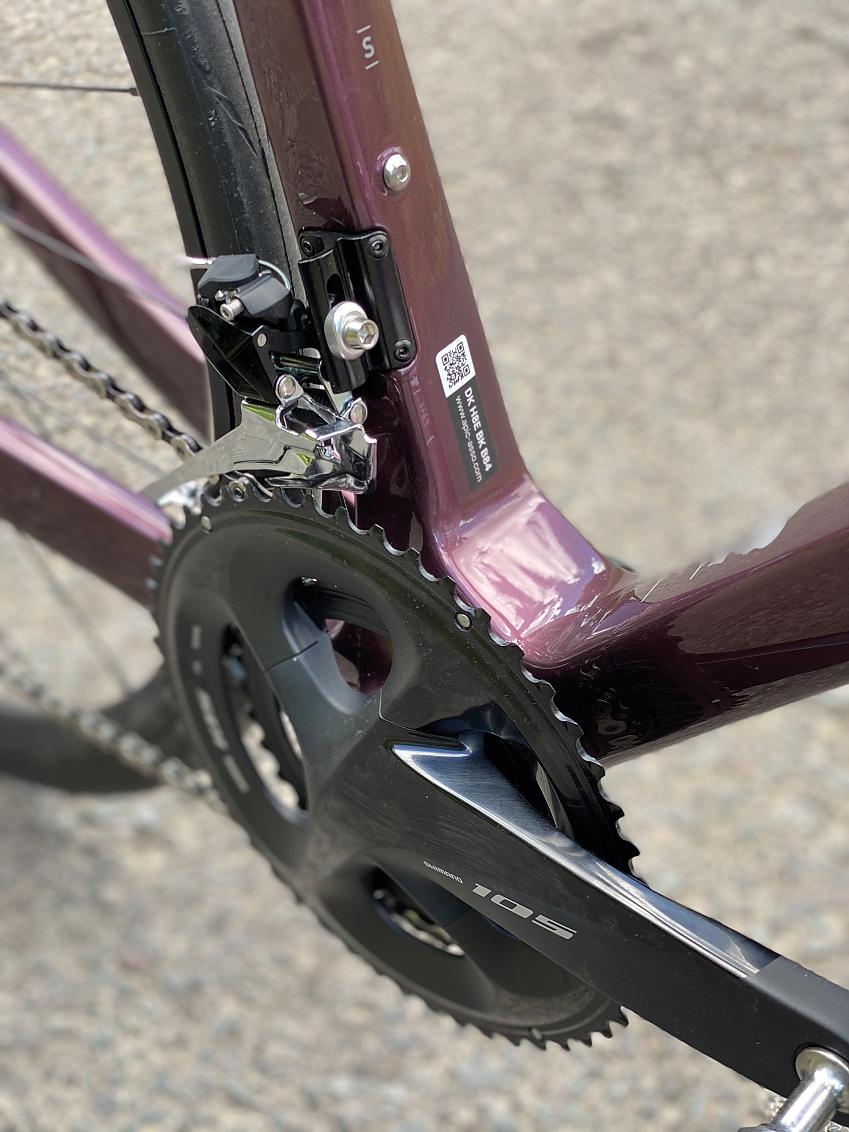 Conventional 50t outer ring on the Van Rysel – too big?

Saddles are very personal in terms of fit; once you’ve found a favourite you tend to stick with it. Bicycle manufacturers know this and tend to specify relatively inexpensive saddles, knowing that customers spending £2,000 on a bike will probably fit a favourite one they already own.

Size-wise, the Cube offers more standover clearance, is shorter in the reach by about 30mm, but has the same handlebar height from the ground as the Van Rysel. The handlebar has a different profile but is still one I’d swap for a wing bar with a tape upgrade. I appreciated the new R7025 levers for smaller hands as soon as I touched the brakes. They’re really comfortable. The lever is flattened just at the contact point, which makes the braking action easier and lighter. 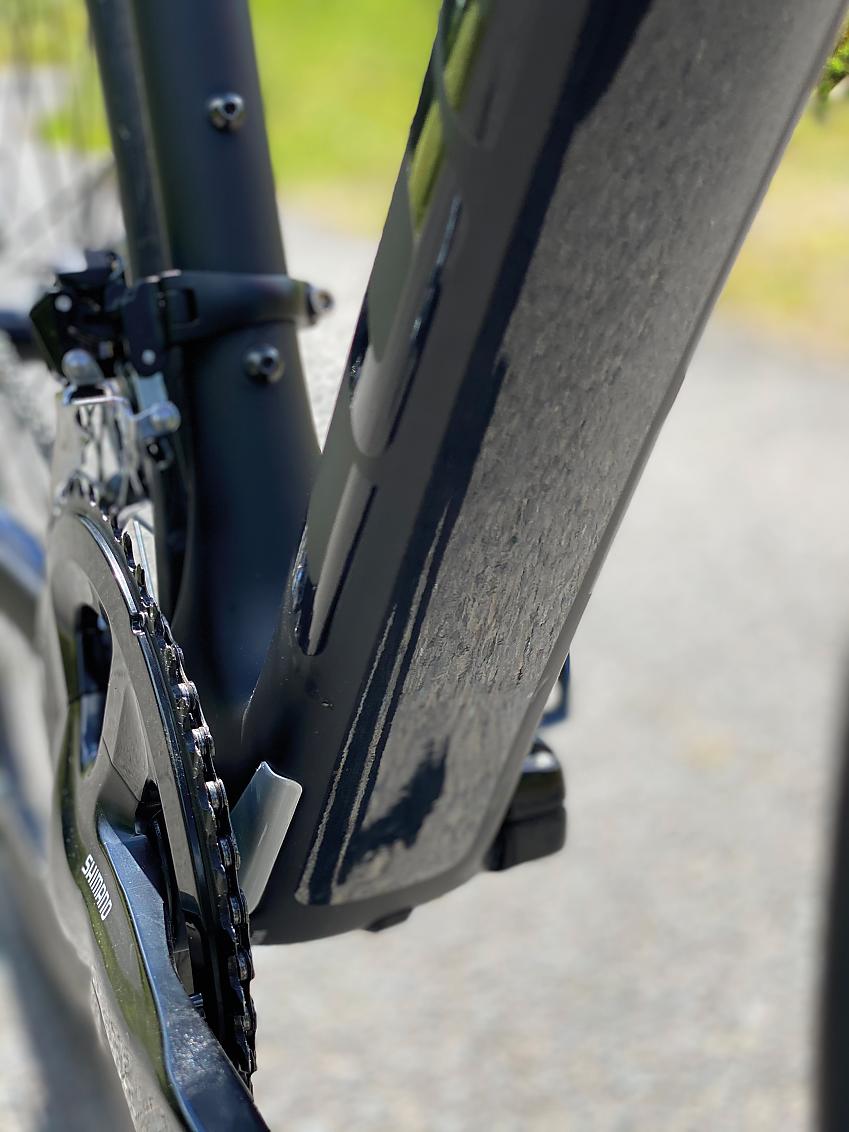 There isn’t much to choose between them but overall I prefer the Van Rysel. Its lower weight is noticeable even when you’re wheeling it out of the house, let alone on climbs. I like its smaller, 140mm rear rotor and lighter wheelset. It’s tastefully finished, and the fork design is in keeping with the frame’s aerodynamic lines and tapered head tube.

The Cube Axial WS GTC Pro is nevertheless a very nice bike. I particularly like the brake levers for small hands and the down tube frame protection. Cyclists who don’t fit an XXS, XS or S Van Rysel will also appreciate the greater range of frame sizes. 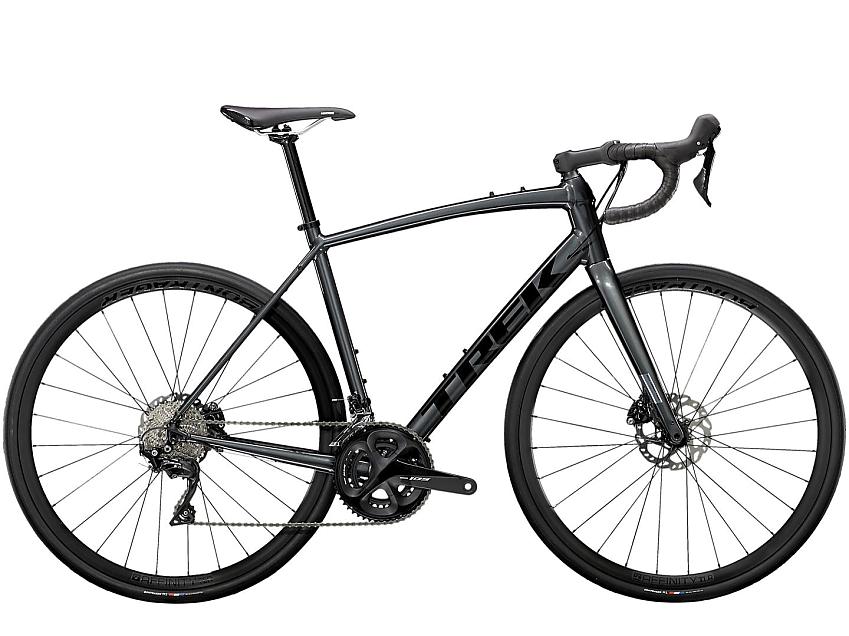 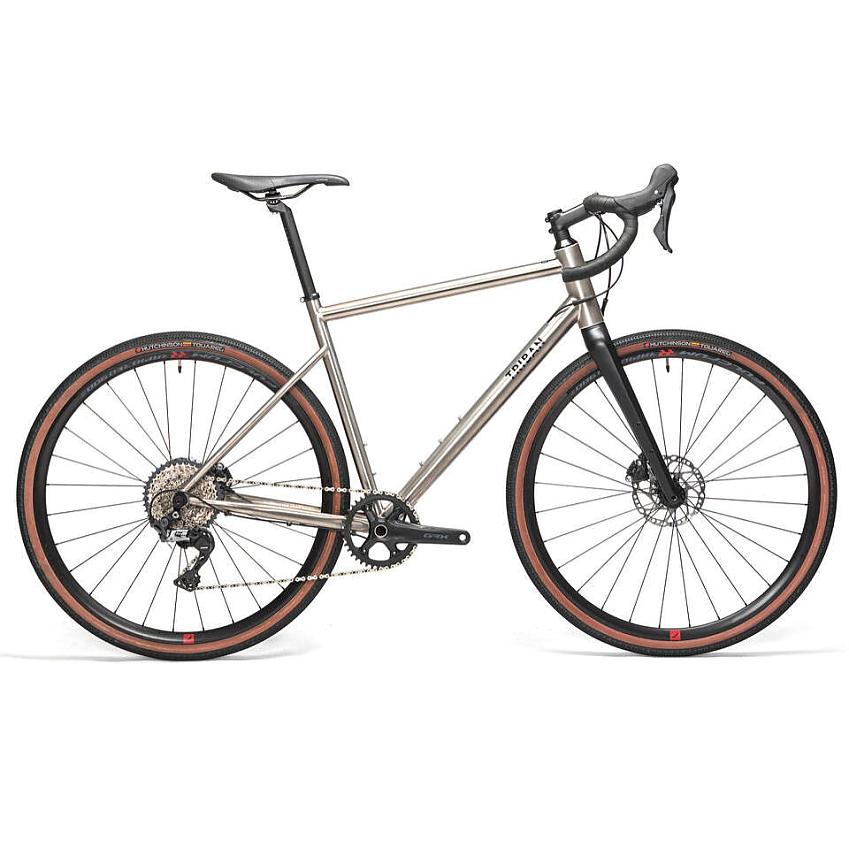 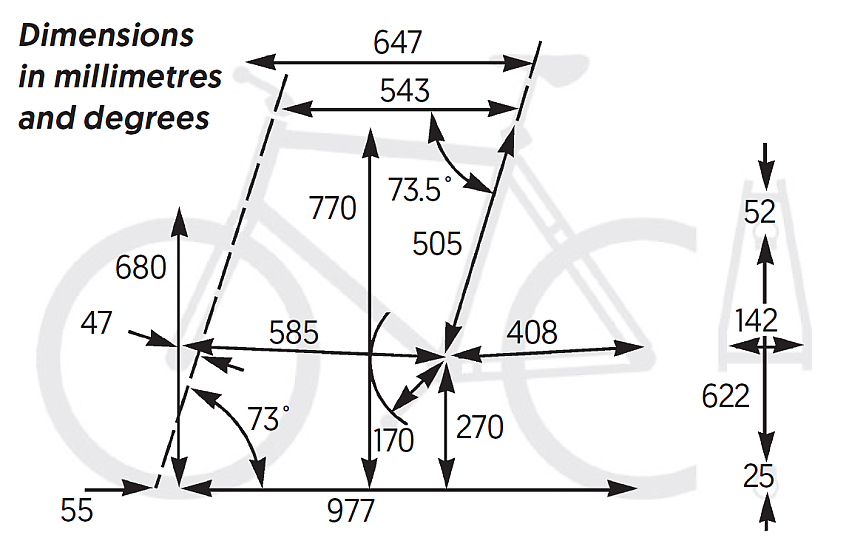 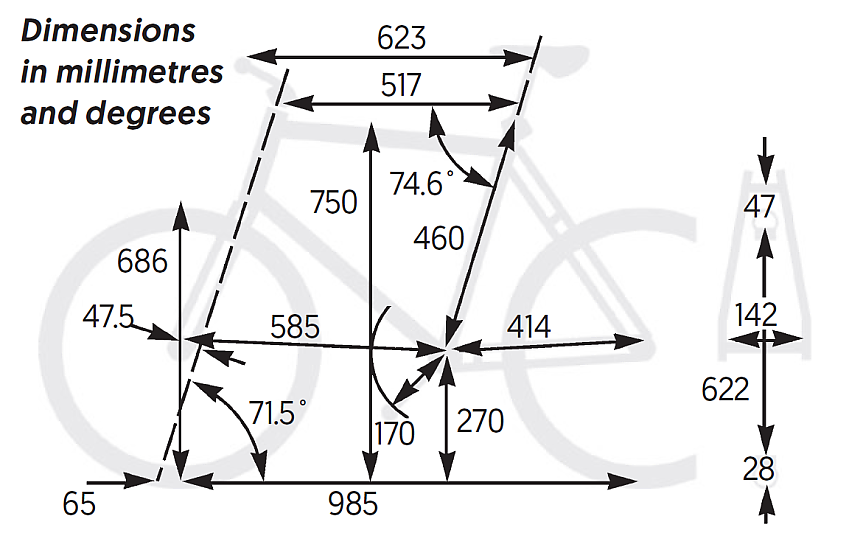