Two interesting strands in current bicycle design illustrate how the road market is becoming ever more segmented: the ‘endurance’ road bike aims to satisfy those wanting racing cycle performance with a little comfort; then there’s a growing number of all-rounders that hope to marry a cyclocrosser’s off-road ability with road cycling’s pace and handling. The Boardman SLS 9.0 is the former. Whyte position the Cornwall as the perfect British road bike, while equipping it with tyre clearance and geometry suitable for well-surfaced trails.

The two bikes are quite different, although it’s worth noting that Boardman and many other manufacturers now also offer disc versions of their endurance road bikes. It’s easy enough to pigeon-hole our rim-braked Boardman as a bike for the faster sportive rider. The Whyte isn’t obviously suited to any particular discipline and may be asked to tackle several. Which is it best at?

Carbon-fibre is the material of choice for both frames. The Whyte uses uni-directional carbon-fibre assembled using what is described as a multi-monocoque build technique. Its straight-bladed ‘full-carbon’ fork isn’t quite, as it employs an aluminium alloy steerer tube, but features in-moulded threaded aluminium mudguard fitment bosses in the sides of the blades and in the crown. The blades and crown are sturdy and built to take the loads imposed by a disc brake. The fork has all-carbon dropouts with, on the left-hand blade, an integral post-mount disc brake caliper fitting.

Similar attention to detail marks the frame, which is offered in four sizes. The size gaps are inevitably large, and although the sizing geometry is cleverly arranged to suit a wide range, some well-set up riders may find themselves on a bike that looks a little too large or small. The gear and rear brake control cables are routed internally behind the head tube, mudguard bosses are moulded into the rear dropouts and the rear of the seat tube, and the chainstays are symmetrically dropped to allow the left-hand stay to accommodate the disc caliper inside the rear triangle.

The Boardman’s frameset is a fine example of contemporary composite road bike manufacture. Its beefy main spars – profiled using Finite Element Analysis to find the desired balance of strength, weight and stiffness – would not look out of place on any of its competitors, while the slim seat stays are similarly tweaked, for increased shock absorption. The all-carbon fork, like the frame, is made using super-stiff high-modulus fibre and employs a tapered steerer tube, of larger diameter at the crown, to stiffen the front end in pursuit of enhanced steering precision. Like the Cornwall, the SLS features internal cable routing; it also has neat detailing such as the ‘strap’-type seat post clamping band and is well-finished, albeit with a colour scheme that demands attention.

Equipped with arguably the best bang-for-the-buck road bike groupset available, Shimano’s 11-speed 105, the SLS is hard to fault. Its CBoardman Elite-branded finishing kit is well-made, light and attractive, although the saddle clamp mechanism needed some light filing before it could be correctly positioned. Mavic’s Aksium wheels are a popular fitment at this level for good reason thanks to their tough build, bladed spokes and sporting appearance. The 23mm Aksion tyres are too narrow for the bike’s avowed purpose; 25mm is now the de facto standard endurance fitment and Aksions in this size would offer a valuable improvement in ride comfort.

Braking is done courtesy of short-reach calipers that use Shimano’s new SLR-EV Dual Pivot concept; the symmetrical twin-pivot layout offers, according to the manufacturer, around 10 per cent more braking power than the previous design. While more complex in construction, this brake is easy to set up and adjust.

Expected brake performance will surely be a major factor for many potential Whyte Cornwall buyers, who may well warm to the sight of SRAM SB700 hydraulic calipers chowing down on 160mm rotors. These are operated by SRAM’s SB700 dual control levers, which shift gears via the now-familiar Dual-Tap function. The Rival rear mech has a maximum capacity of 32t. It would be good to see the Cornwall come thus-equipped in place of the 28t largest rear sprocket to allow it to use more of its all-roads potential.

Overall build quality is excellent, with Whyte-branded finishing kit adding a touch of gloss to the frame’s matt paintwork. Built to take the torsional loads imposed by disc brakes, the wheels have 28 spokes front and 32 rear, all tangential, with durable brass nipples. Oddly, their deep-section and possibly ‘aero’ rims are matched with round section spokes. In a neat touch, the wheels are clamped using Whyte’s security skewers, which can only be turned using the pentagonal key provided. 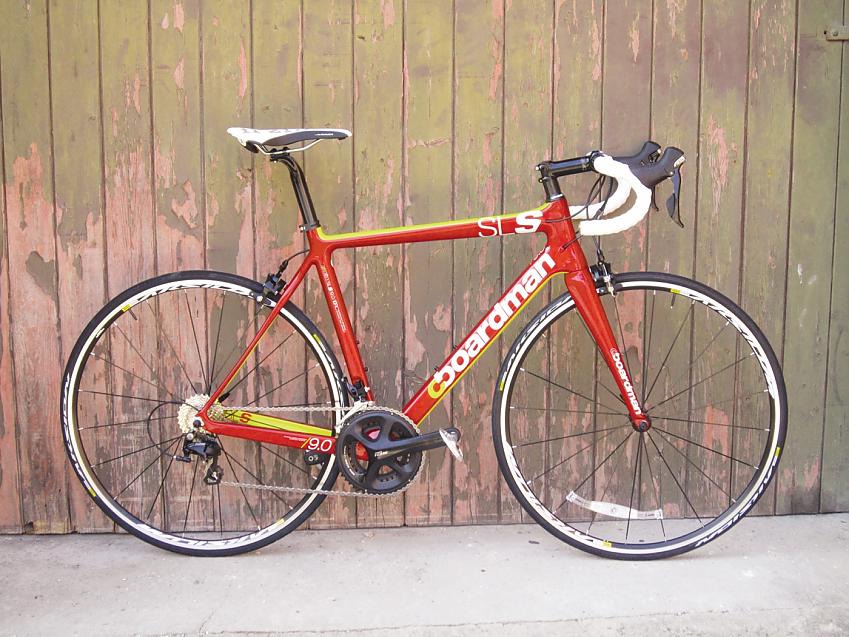 Both machines provide much the same initial impression: a notably harsh ride that shows that, while some composites may dampen vibration, a rigid structure doesn’t readily absorb bumps. Perhaps surprisingly, the Boardman is less severe. Although it is labelled an ‘endurance’ road bike, it rides and handles like a well-designed racer. Its sub-100cm wheelbase, stiff construction and taut steering geometry make it immediately responsive to rider input while, with familiarity, comes the sense that the rear stays are, happily, less stiff vertically than the fork. The narrow 23mm tyres, inflated to 90/100psi for the test, hardly help. Most buyers would be well-advised to replace them with something fatter.

In fact, it is not obvious, even after a few miles, why the SLS should be labelled as an ‘endurance’ machine rather than a competition cycle. While the head tube is long enough for most non-competitive road riders to find a comfortable bar height, it is short enough for racing. More obviously competition-orientated machines in the Boardman stable differ from this by mere millimetres.

Both machines provide much the same initial impression: a notably harsh ride… Most buyers would be well-advised to fit wider tyres.”

In comparison, the Cornwall had me scratching my head. It is stiff, very stiff. The ride over broken chipseal on its 25mm Maxxis Detonator tyres at 80/90 psi is anything but plush, and yet it is no road racer. Instead, its longish wheelbase and relaxed angles suggest long days in the saddle with no particular pace in mind; days when it would be nice to ride in comfort. The frame and fork have clearance for bigger, plusher rubber, perhaps up to 32mm without mudguards, although the seat stay bridge is limiting.

Yet the bottom bracket sits at a high 282mm on the standard 25C tyres and would only sit higher on wider ones. The pedal clearance might be useful off-road, but the Cornwall is labelled a road bike, where such a high bottom bracket is superfluous.Its hydraulic disc brakes might prove useful on a laden tourer but there’s no provision for rack fitment. (Bikepacking bags or a saddlebag and bar bag could work.) The brakes add little on the road while requiring the frame and fork to be made stiffer than would otherwise be necessary.

Is the Cornwall a road bike, cod-’crosser, a tourer or an adventure bike? It is stable at speed and, on a smooth road, is what a converted ‘cross bike’s owner might hope to be riding. It looks good, packs plenty of solid technology, and is very well made. It needs fatter tyres out of the box, which would probably make it more of an adventure bike.

In outright performance terms on the road, the Whyte lags, thanks largely to the inertia of its sturdy wheels, behind the Boardman, which would not be out of place in an LVRC or second-cat road race. While there’s little difference at a gentle pace, the Cornwall lacks the instant acceleration needed when racing. Nor does it score on what should be its trump card: both bikes provided equally capable braking on my test descent, a 25% road with a hairpin. The Whyte’s discs oxidised blue with heat within 200m on this gradient; while they did not fade, it’s an indication of the heat input that must be handled by a thin sliver of steel. One good reason to choose the Whyte for its brakes might be for use as an all-weather commuter, where rim wear should be non-existent and maintenance minimised. Indeed, it is listed on the Whyte website within the ‘commuter road’ category.

While the Boardman is, essentially, no less and no more than a fine example of the contemporary mid-range high performance road bike, the Cornwall surely aspires to be more than just a commuter, and needs, if nothing else, suitable rubber if it is to find its niche as a general-purpose road ride.

This was first published in the June/July 2015 edition of CTC's Cycle magazine.

Unidirectional carbon-fibre improves on the stiffness of the familiar carbon twill by keeping separate the fibre layers running in different directions. Woven fibres follow a wavy path that must straighten under tension before the fibres can properly resist a load, whereas uni-directional fibres lie flat and able directly to resist tension. Twill is tougher and is used where the composite material must, for example, be drilled or is likely to be subjected to impacts.

Post-mount. This attachment standard enables a disc brake caliper to be fitted directly to the fork or stays without an adaptor, which saves weight. 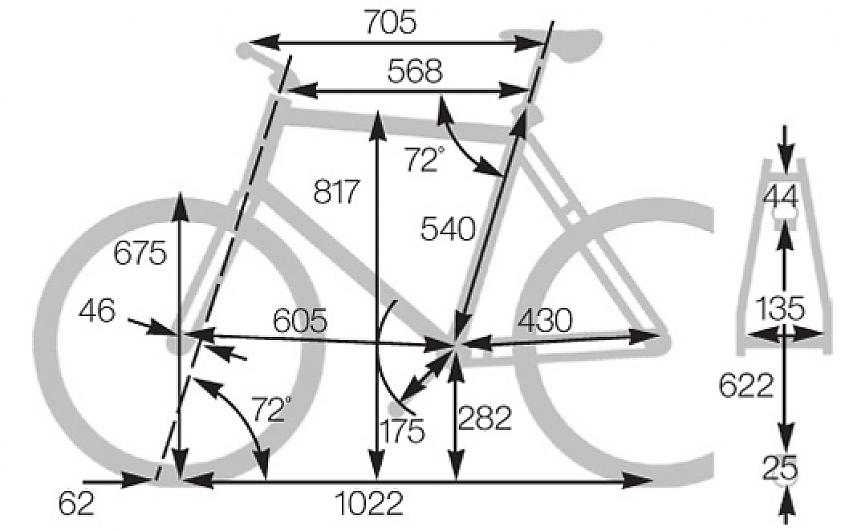 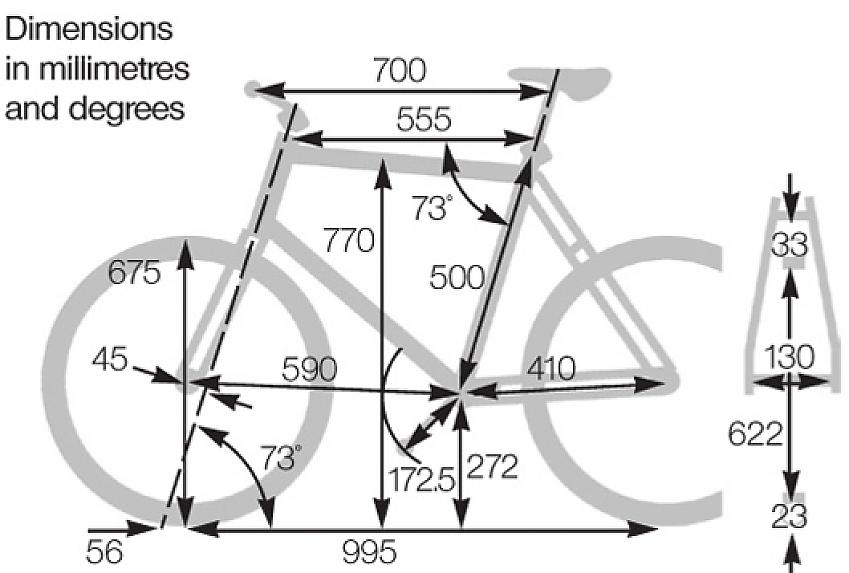 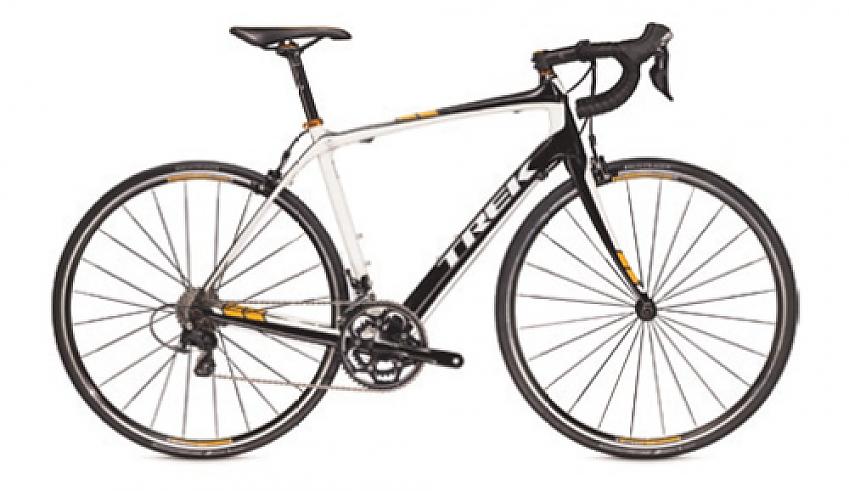 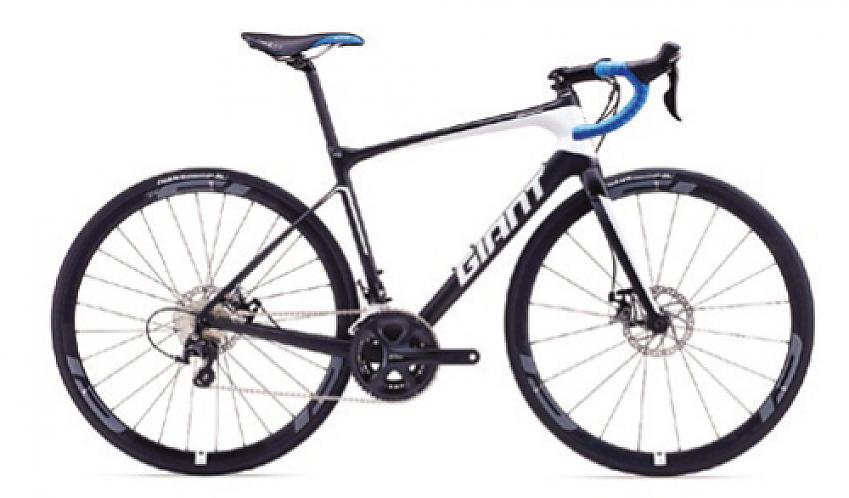