The steel tourer with all the trimmings is a long lasting bike in more ways than one. Dan Joyce tests a Genesis Tour de Fer 30 and Bombtrack Arise Tour. This article originally appeared in Cycle magazine February/March 2021.

The traditional tourer fills a different role from the gravel bike, which supplanted its position in the adventure cycling spotlight. It’ll carry much more, whether camping gear or groceries; a front derailleur usually means a greater range of gears, especially lower ones; and it comes with equipment such as pannier racks and mudguards that make travel and transport cycling more convenient and cleaner. If you don’t mind some extra heft and can live without the gravel bike’s marketing fairy dust, a tourer is just as versatile.

The price of tourers is high, since they’re not mass market bikes. On top of that, currency fluctuations caused by the uncertainty in the financial markets around the terms of the UK's leaving of the EU and soaring shipping costs have seen all bike prices rise steeply over the last few years. The days of the £700 Dawes Galaxy are gone – as is the bike itself, which recently ceased production. A four-figure sum is standard even for an entry-level model like Ridgeback’s Voyage. Factor in higher-tier components and equipment like a hub dynamo and you’re likely looking at closer to £2,000. 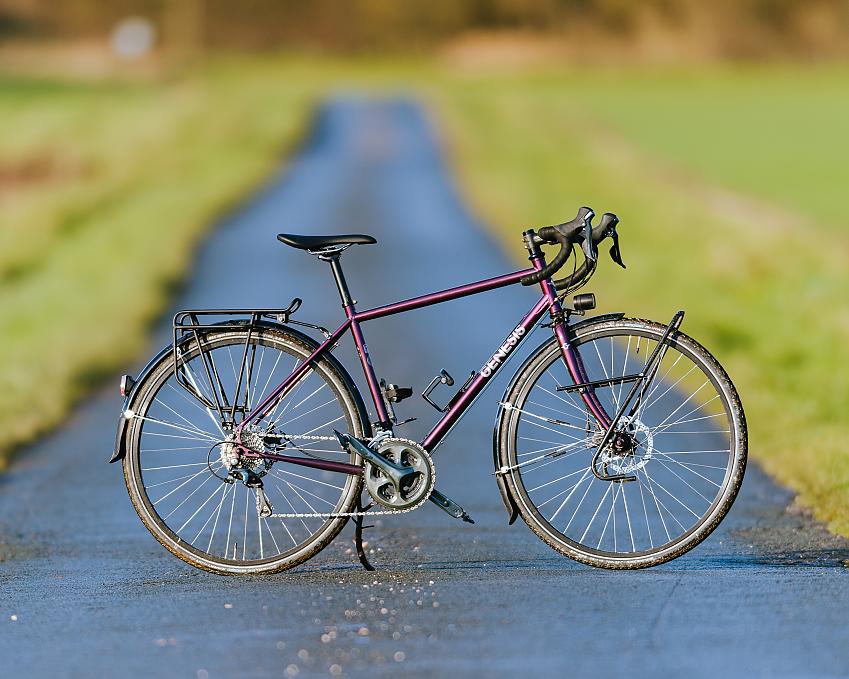 First look: The Genesis is a sturdy and stable steel tourer with decent equipment and one obvious shortcoming: a 30/32 bottom gear and has gears indexed for a 10-speed road mech

The UK-designed Genesis Tour de Fer 30 – the name is a spin off from the brand’s popular Croix de Fer – is the top model of four, two of which have drop bars, two flats. The flat-bar bikes are £250-£350 cheaper and come with more practical gearing, so it’s worth considering how attached you are to drops. Maybe it’s time to try the trekking bike approach?

Bombtrack is a German company I initially thought was American because its bike range is reminiscent of Surly’s or Salsa’s. Its Adventure & Touring lineup is on point, style-wise – for example, one of its Fargo-like Bombtrack Beyond models comes with a porteur rack…and no mudguards. In fully-equipped contrast there’s also this, the Arise Tour. 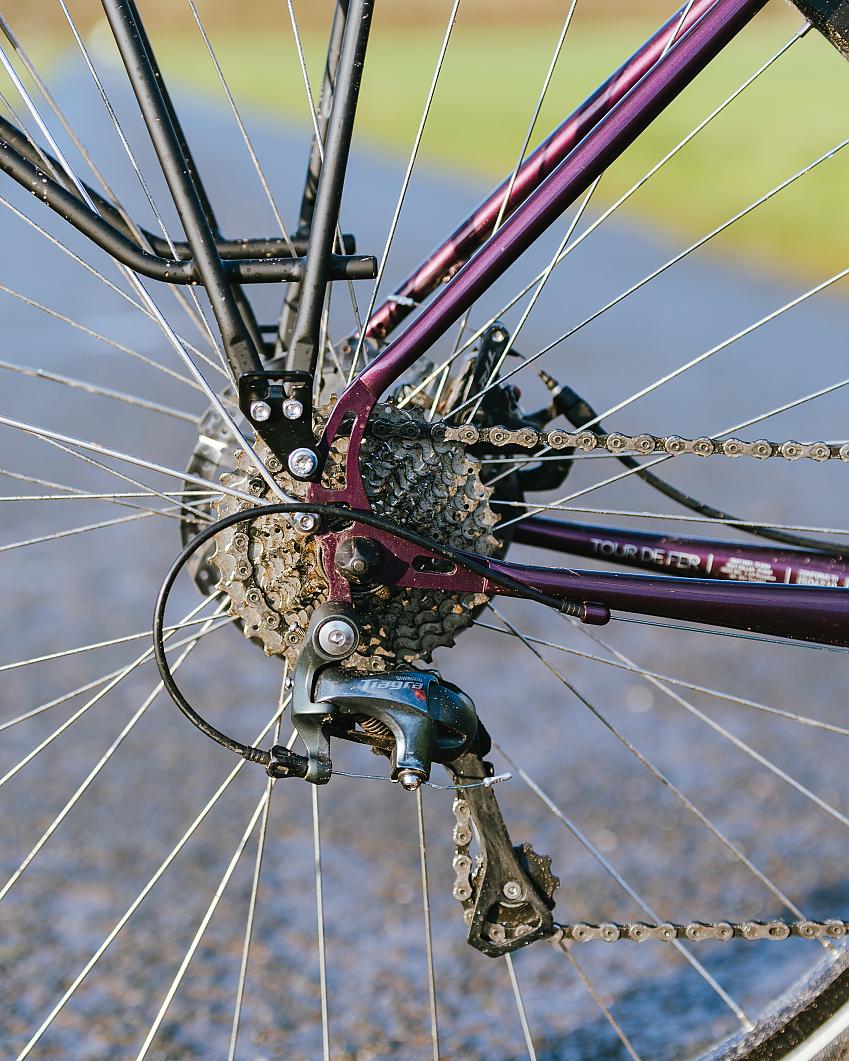 Both bikes have robust chrome-moly steel framesets. The principal benefit over aluminium or even titanium isn’t so much that steel might be repaired by a blacksmith in Azerbaijan but, when built like this, that it’s surely less likely to break in the first place. These are not svelte frames with steel’s famed springy ride: they’re heavy, strong, and stiff. Ride comfort comes not from the frame material but from the wider tyres, ergonomic contact points, and geometry.

The Genesis is unusually long for a Medium frame – the same length, in fact, as the Bombtrack in Large. I like a long frame for a tourer. It gives more toe room so you don’t kick the front mudguard to bits or catch it at the worst moment weaving up a 20% climb. And the longer wheelbase is good for stability. With a 100mm stem, however, I could only comfortably ride it on the bar tops. So I switched in a 60mm stem (pictured) for the test. If I’d had one,70mm would’ve been better. 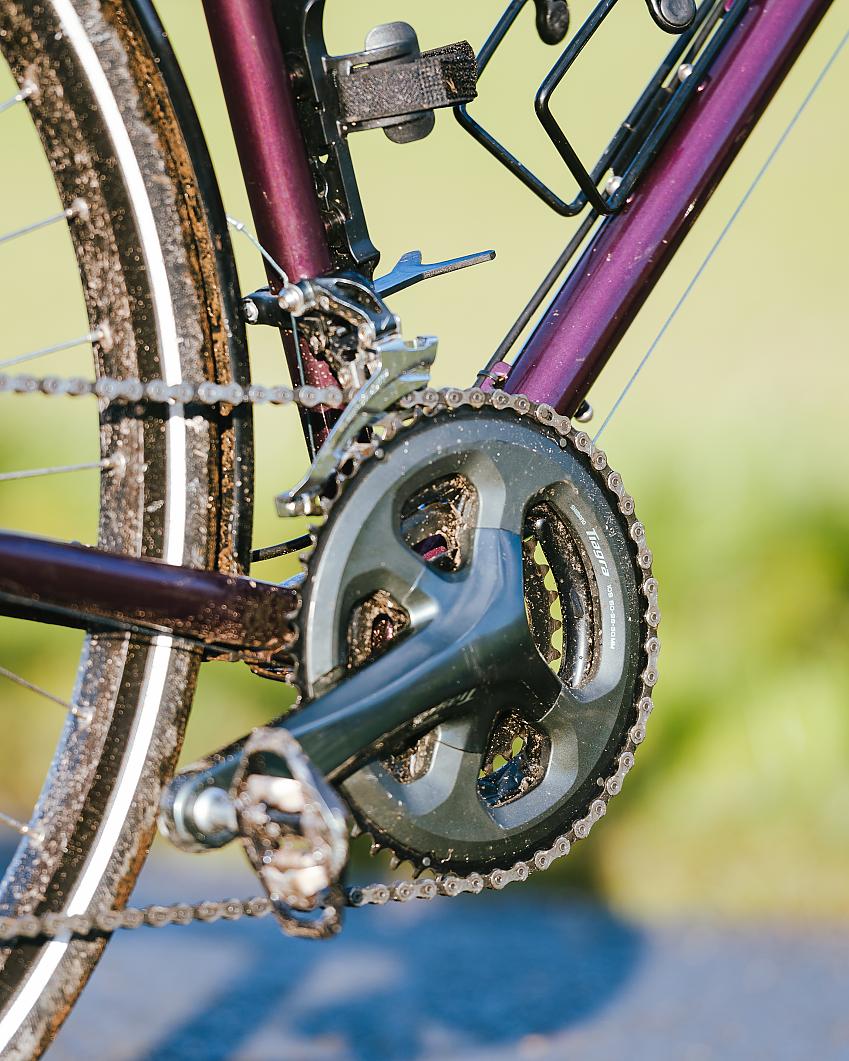 The Medium Bombtrack fitted medium-height me as supplied, since it has a shorter top tube and a slightly shorter stem. The front centres distance (centre of bottom bracket to centre of front hub) is shorter too. With a mudguard over a big  tyre, there’s not much room for your toes – especially if you favour flat pedals. I frequently kicked the front mudguard during the test. The Medium is surely the overlappiest size since it’s the shortest frame to squeeze in big-tyred 700Cs (as well as mudguards); the Small and Extra Small have 650B wheels. If I were buying, I’d be tempted to fit a correspondingly shorter stem to the longer-framed Large.

In terms of frame details, the Bombtrack is a little different from the more traditional Genesis. Its dropouts are 12mm thruaxles, which offer more secure wheel retention and some extra stiffness at the hub – no bad thing for a heavily laden bike. The rear dropouts aren’t named but look like Paragon Machine Works sliding ones. They’d enable you to tension the chain and continue riding if you broke the rear derailleur.

Both bikes have a full complement of frame fittings. As well as rack and mudguard mounts, each will carry three spare spokes and at least three bottles. The Bombtrack could take a fourth if you fitted a cage to the top tube mounts meant for a small ‘fuel tank’ frame bag. 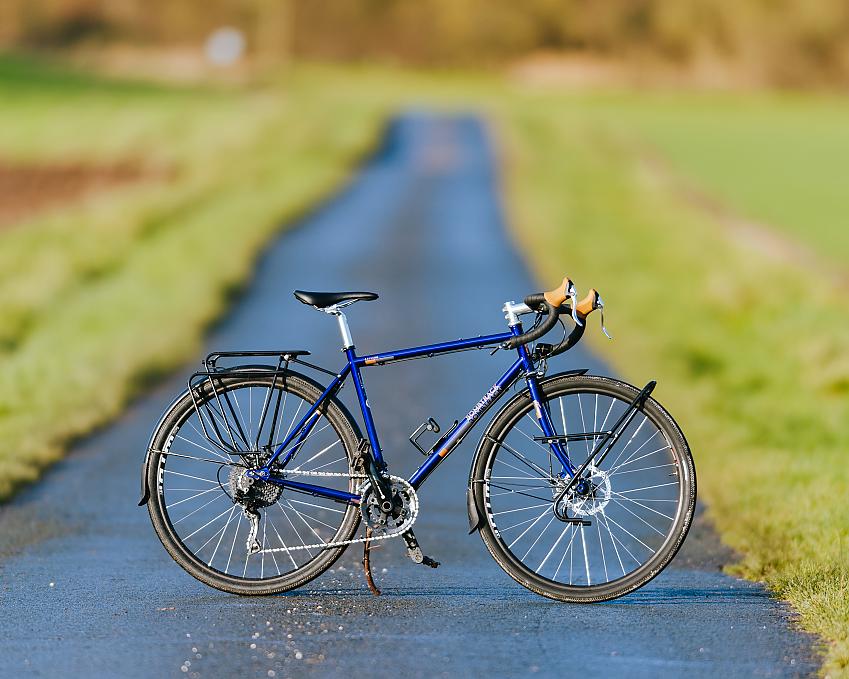 First look: Bar-end shifters enable Bombtrack to mix road front and mountain bike rear derailleurs in this 2×10 setup and the gears are indexed for a 10-speed MTB derailleur

Touring bikes need strong wheels. The Genesis has them. Its 36-hole Sun Rhyno Lite rims are heavy duty hoops intended for mountain biking. They’d actually be better suited to wider, lower pressure tyres than the 37mm Marathons fitted – if only there were more clearance under the mudguards. On such wide rims, these narrower, higher pressure tyres contribute to a wooden ride feel.

The Bombtrack’s wheels have only 32 spokes. The rear has a wider axle (142mm), so will be a little stronger and stiffer due to the better bracing angle of the spokes. More spokes would nevertheless be better, especially if you’re heavier than average, ride on dirt roads, or carry a camping load. The Bombtrack’s rims are tubeless compatible, which is a two-edged sword. If, like most tourists, you don’t go tubeless, you’ll be stuck with unnecessarily tight-fitting tyres. 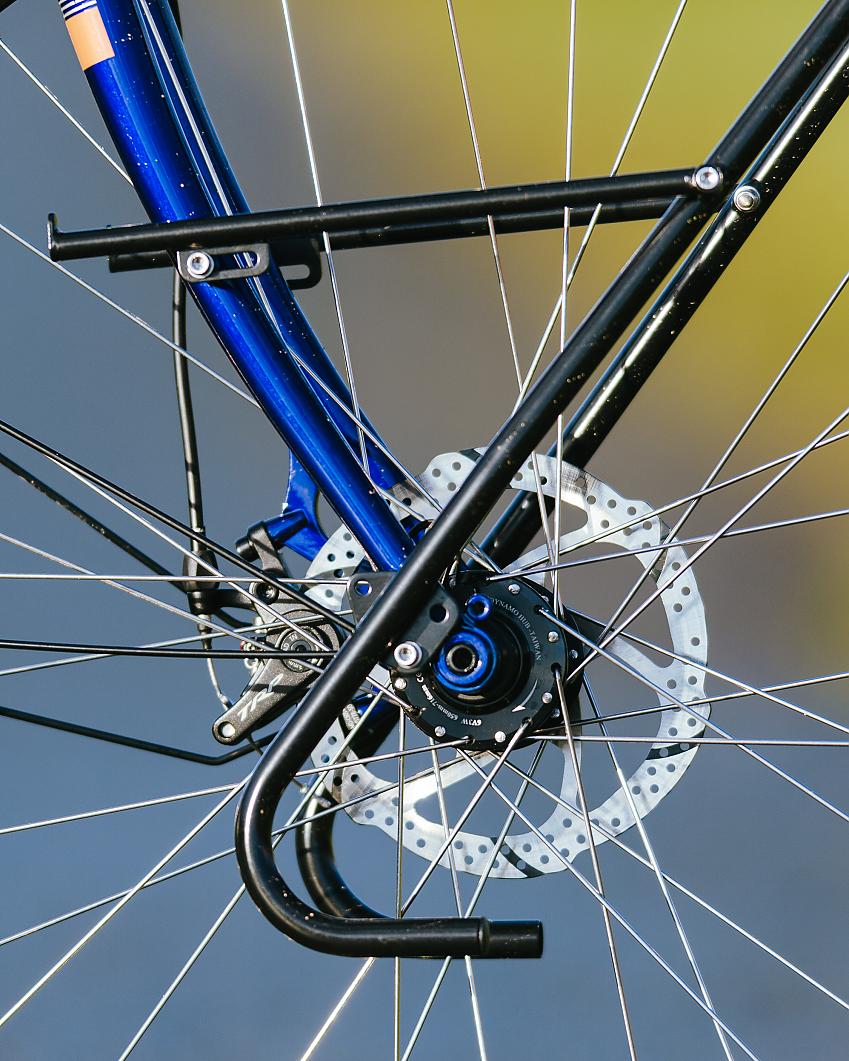 Both bikes employ TRP Spyre-C mechanical discs. Braking feel is good, power not quite up there with BB7s

There’s no dedicated touring bike groupset so the question of what gearing to use is moot. The Genesis has a 3×10 Shimano Tiagra groupset. (Madison, the parent company of Genesis, distributes Shimano in the UK.) On the upside, that means brifters (integrated brake and shift levers) and a set of components that’s meant to mesh well together – and does. On the downside, Tiagra is a road bike groupset. A 50-39-30 triple and an 11-32 cassette would be fine on an audax bike but is a hindrance on a heavyweight load-lugger. The 26in bottom gear is way too high, as is the 126in top.

Bombtrack’s solution is better. Microshift bar-end shifters operate Microshift road front and mountain bike rear derailleurs, marrying a sub-compact double chainset to an 11-42 cassette. This gives a useful 20in bottom gear, plus simpler and more reliable front shifting. A smaller front double, such as 40-24, would be better yet. Top gear would still be big enough at ~100in, bottom gear a wallcrawling 16in, and you'd be able stay in the big ring most of the time. Bar-ends aren’t as convenient as brifters but here the pros outweigh the cons. 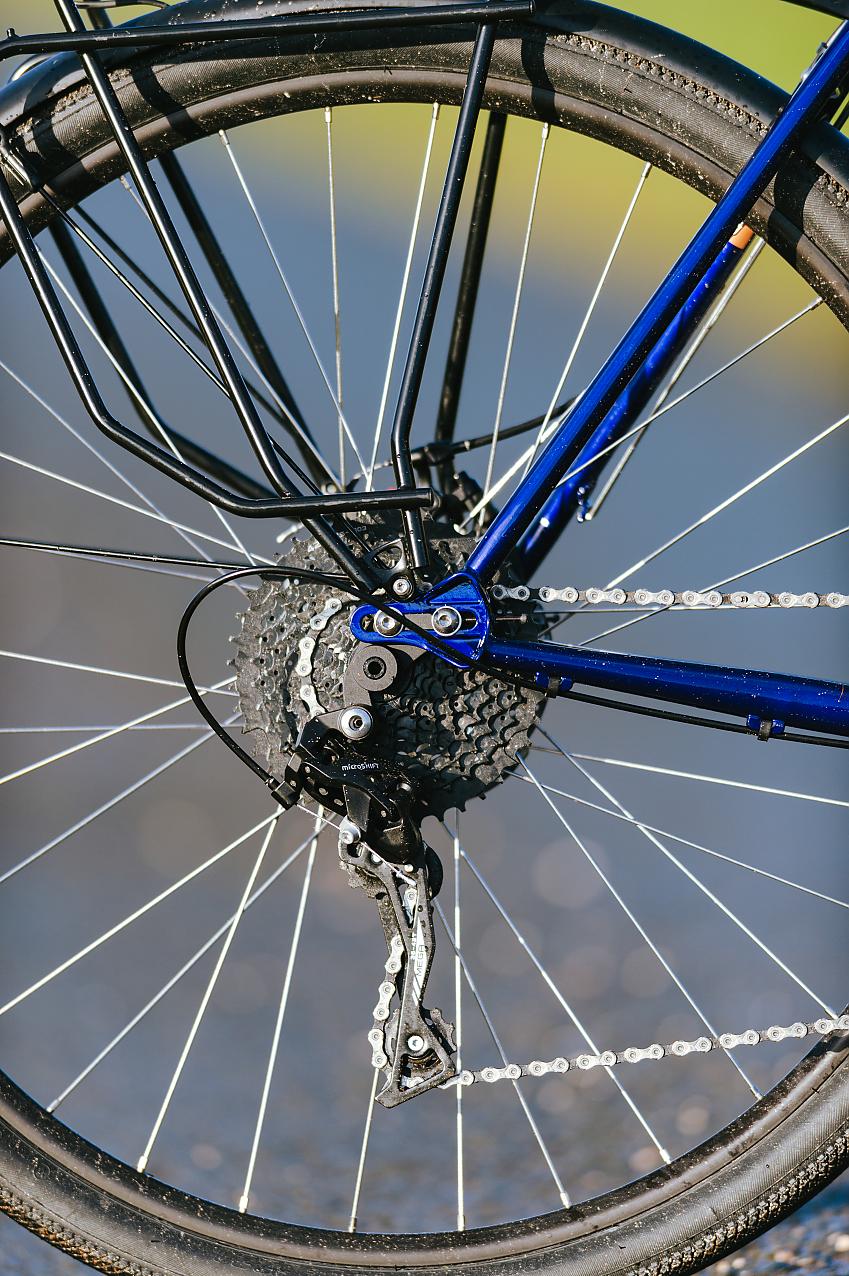 Both bikes use TRP Spyre-C mechanical discs. Braking is smooth, since both pistons move rather than just one, but coming from Avid BB7s they seemed to me a bit weedy in outright power. Curiously, the Genesis has six-bolt rotors fitted to Centerlock hubs with adaptors. I guess six-bolt rotors are easier to find on tour, but why not have six-bolt hubs as well?

Hub dynamo lighting is fitted to both bikes, and it’s useful both for travel and transport. The Supernova lights of the Bombtrack are always on unless you unplug the dynamo at the hub. That makes a certain sense for an urban bike but I found it oddly annoying elsewhere. The Busch und Müller lights of the Genesis are switchable. The rear, a mudguardmounted Secula, incorporates a reflector and stands out more than the Bombtrack's minimalist Supernova rear light.

At this price, you expect racks and mudguards to be good. The racks are: both of those on the Bombtrack are excellent Tubus models, as is one of the Genesis’s – and I’ve no complaints about its M Part companion. The mudguards are less good. The Sunnywheel ones on the Genesis are a little narrow, judging by how dirty the bike became. The rattly Bombtrack Pipe guards are worse. Their plastic stay ends are fragile, a point proved by one being snapped in transit. I glued it for the photoshoot but soon kicked it apart again. 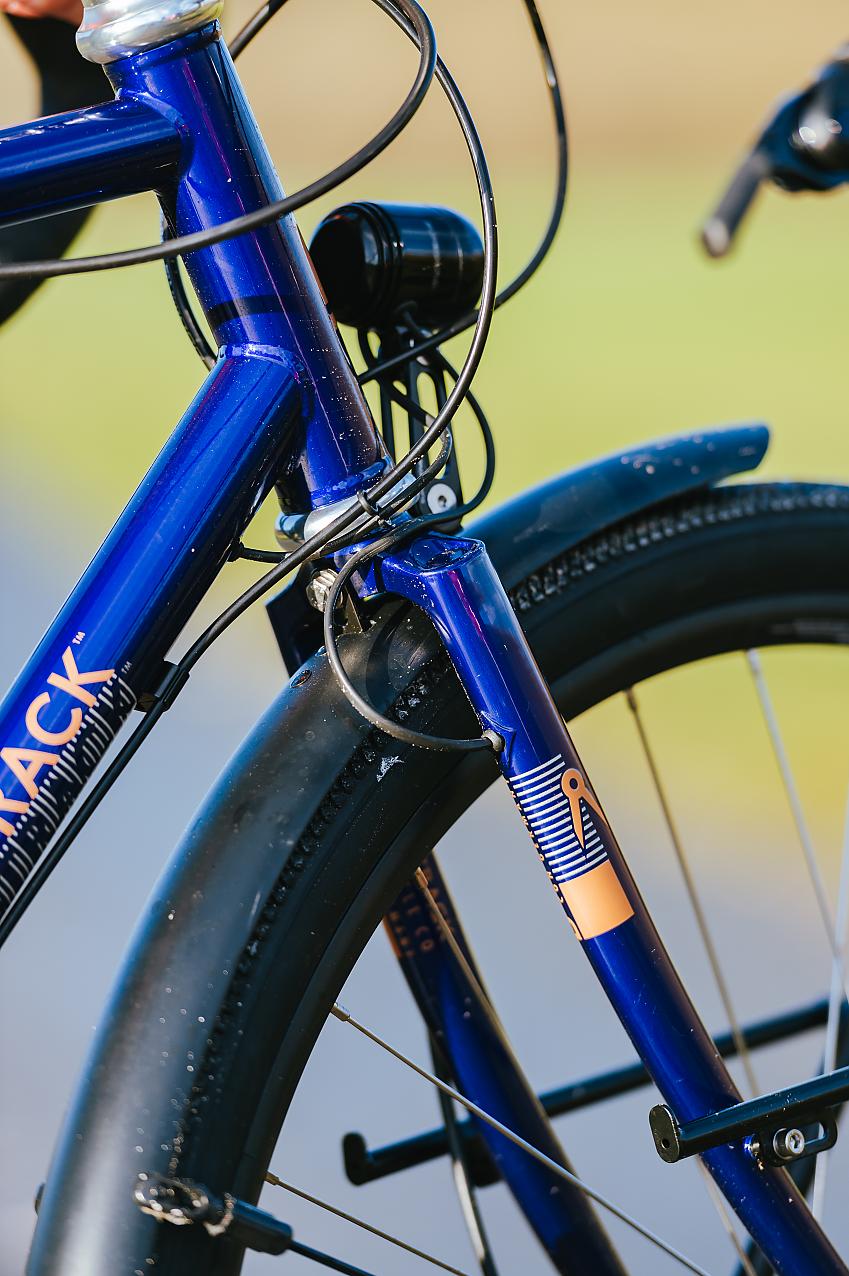 Internal wiring in the Bombtrack: neat but hard to replace

As you’d expect from touring bikes, these have stable and predictable handling. With panniers fitted, they’re both pleasingly stiff to ride in or out of the saddle; there’s no flex or shimmy. Both bikes have a slightly flared drop bar, offering more steering leverage on the drops. This could help control on dirt roads or with bigger loads, such as overstuffed panniers or a toddler in a rear childseat.

Neither bike has much pep, not because they’re heavy (although they are) but because the tyres are rather stodgy. Yes, they’re touring bikes and reliability trumps speed when travelling, but even a tourer will spend much or most of its life not actually touring. I’d fit Schwalbe Marathon Supremes, a touring tyre with excellent on-road rolling performance. 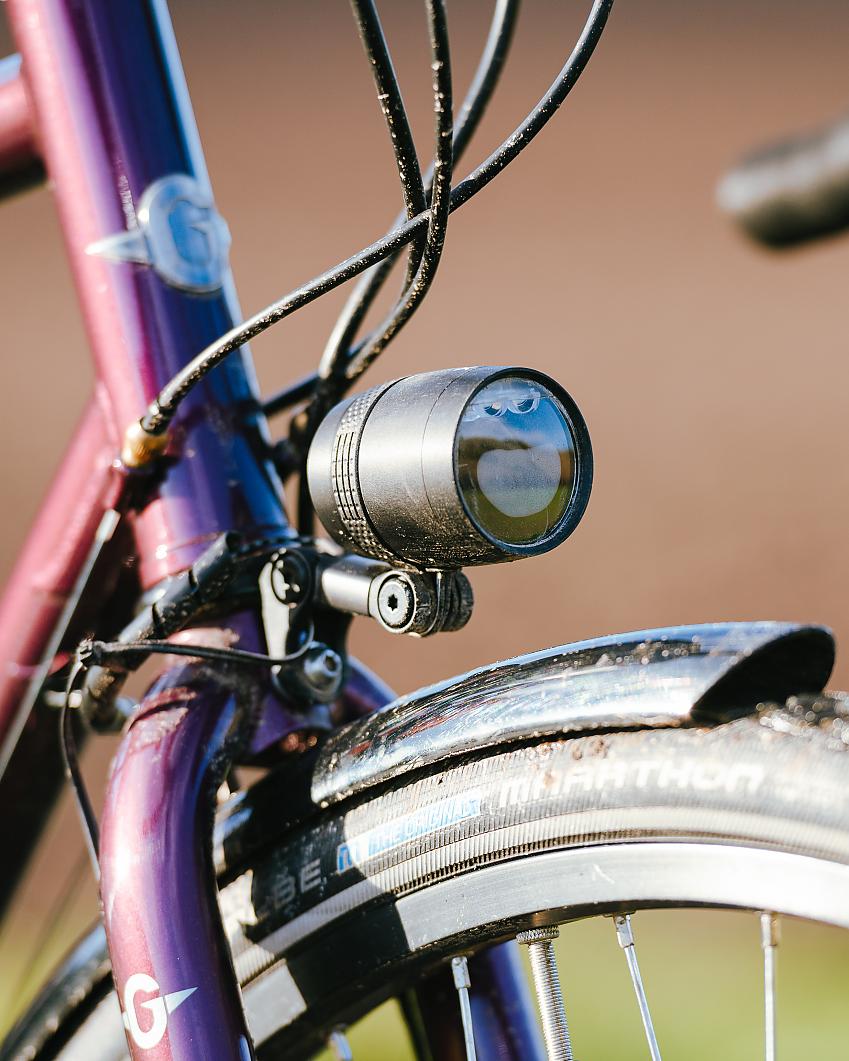 The Genesis has a switchable B&M IQ-8 front lamp

The Genesis is a durably built and well equipped bike with a significant drawback for loaded touring: its too-high gearing. A quick fix would be to ditch the big chaining, then fit a Wolf Tooth RoadLink and an 11-40 cassette. Otherwise, aside from a shorter stem, the only thing it lacks is frame clearance for the bigger tyres its rims are ready for.

The Bombtrack is equally well built and equipped. It’s the better tourer as spec’d because its gears will scale hills you’d walk up with the Genesis. Fundamentally, a tourer is a bike for having a nice ride on – not a nice stroll with. If the chainrings were smaller, the frame 10-15mm longer, and the mudguards SKS Chromoplastics, I’d like this thoughtfully designed Bombtrack even more.

Keenly priced 3×9-speed disc-braked steel tourer from Spa. Custom gear ratios are an option, as is (for an extra £135) hub dynamo lighting. Similar 725 Steel Tourer is available if you don’t want discs.

The Disc Trucker’s sturdy steel frame has big clearances and lots of braze-ons, while the 3×9 drivetrain has a decent (26/34) bottom gear. But with no equipment, it’s looking expensive these days.

At Cycle, we are proudly independent. There’s no pressure to please advertisers as we’re funded by your membership. Our product reviews aren’t press releases; they’re written by experienced cyclists after thorough testing. This test featured in the February/March 2021 edition of Cycle magazine. 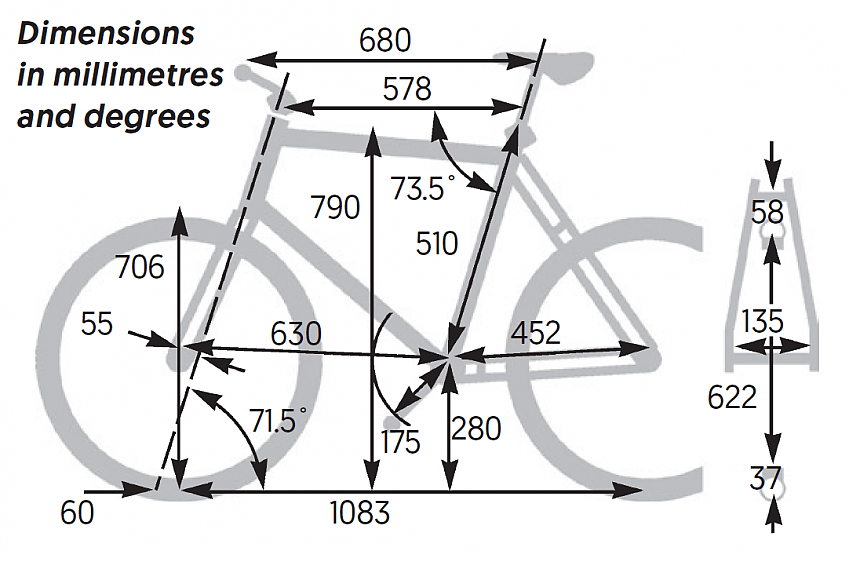 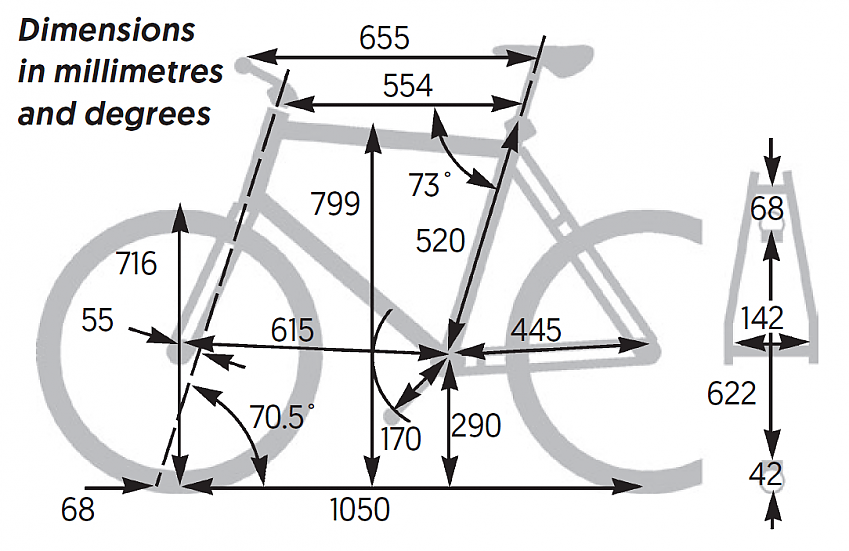