Thirteen-year-olds Jasmine and Matilda are members of Richardsons CC, a Cycling UK affiliate group. Both have competed in XC races and ride often in Dalby Forest

When your son or daughter outgrows the biggest model from Islabikes, Frog, or whoever, a small-sized adult bike is the next step. But not all brands cater for riders aged 11-14, for whom even a size S might be too big, too heavy, and fitted with overly stiff suspension.

Women’s specific models can be a better bet for this age group, irrespective of gender. They come in smaller sizes and may have shorter cranks, softer-sprung suspension, shorter reach brakes, and less of a stretch to the handlebar.

Too bad they’re often pink. Neither of the 13-year-old girl testers preferred the Canyon’s salmon colouring – and most lads that age would hate it. Kudos, then, to Whyte, which calls its ‘women’s’ mountain bikes ‘compact fit’ and employs neutral colours. 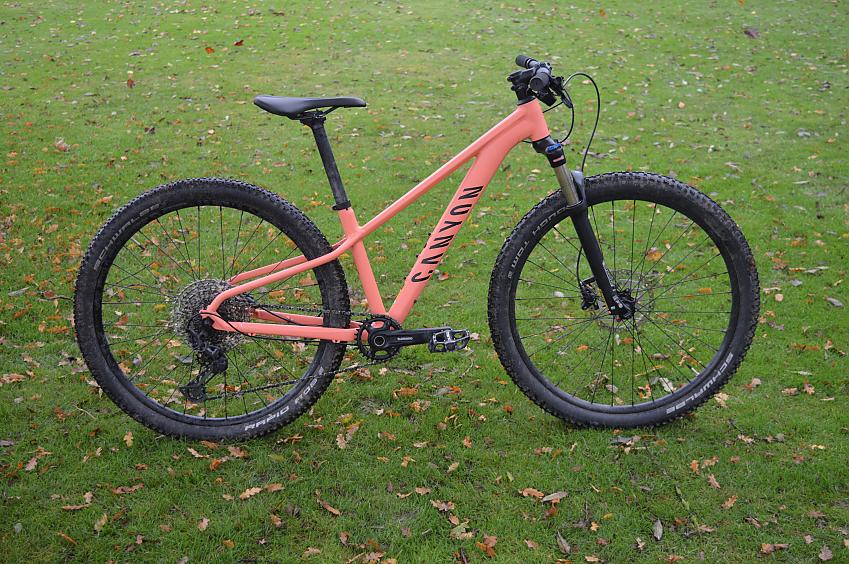 Both bikes on test cost almost £1,000. That isn’t as much in bike terms as it was, but still buys a well-made aluminium hardtail with an air-sprung suspension fork, intuitive 1× gearing, and hydraulic disc brakes.

German brand Canyon sells direct to the consumer online, so all its bikes tend to be well specified for the price. The flip side is that you can’t try before you buy. The Grand Canyon WMN models, like the men’s, have wheel size scaled to bike size: 29in wheels for the biggest, 27.5in for the smaller sizes. It’s a sensible idea.

Whyte is a British company best known for its progressive geometry trail bikes – that is, bikes with a slacker head angle and longer front centres. These differences are obvious when you stand the test bikes side by side.

Unboxing the bikes, the first thing that struck me was the size of the Canyon. It’s dinky. That’s not because it’s an XS and the Whyte is an S; the size bands are different between the brands. The XS Canyon is meant for riders 152-162cm tall, the size S Whyte for 155-165cm riders, which is pretty close. Yet the Canyon is a much smaller bike. I’d advise buying the next size up from what’s recommended. 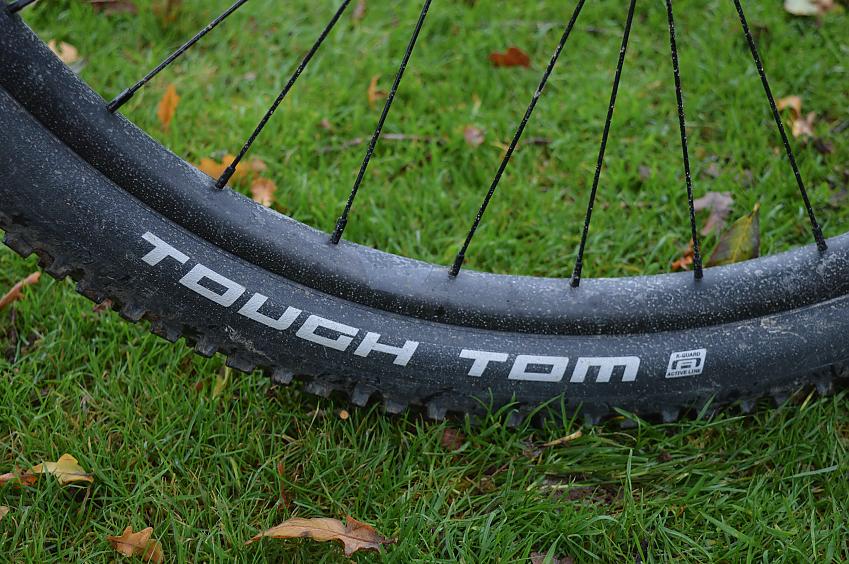 Details on the Canyon’s aluminium frame suggest it’s been designed as an all-purpose bike. The frame geometry is that of a cross country mountain bike but it also has mounts for a pannier rack and kickstand.

Unlike Grand Canyons 7 and 8, there’s no additional port in the 6’s down tube for a dropper seatpost cable. (The covered hole between the bottle bosses is where the gear cable and brake hose are zip-tied to stop them rattling.) 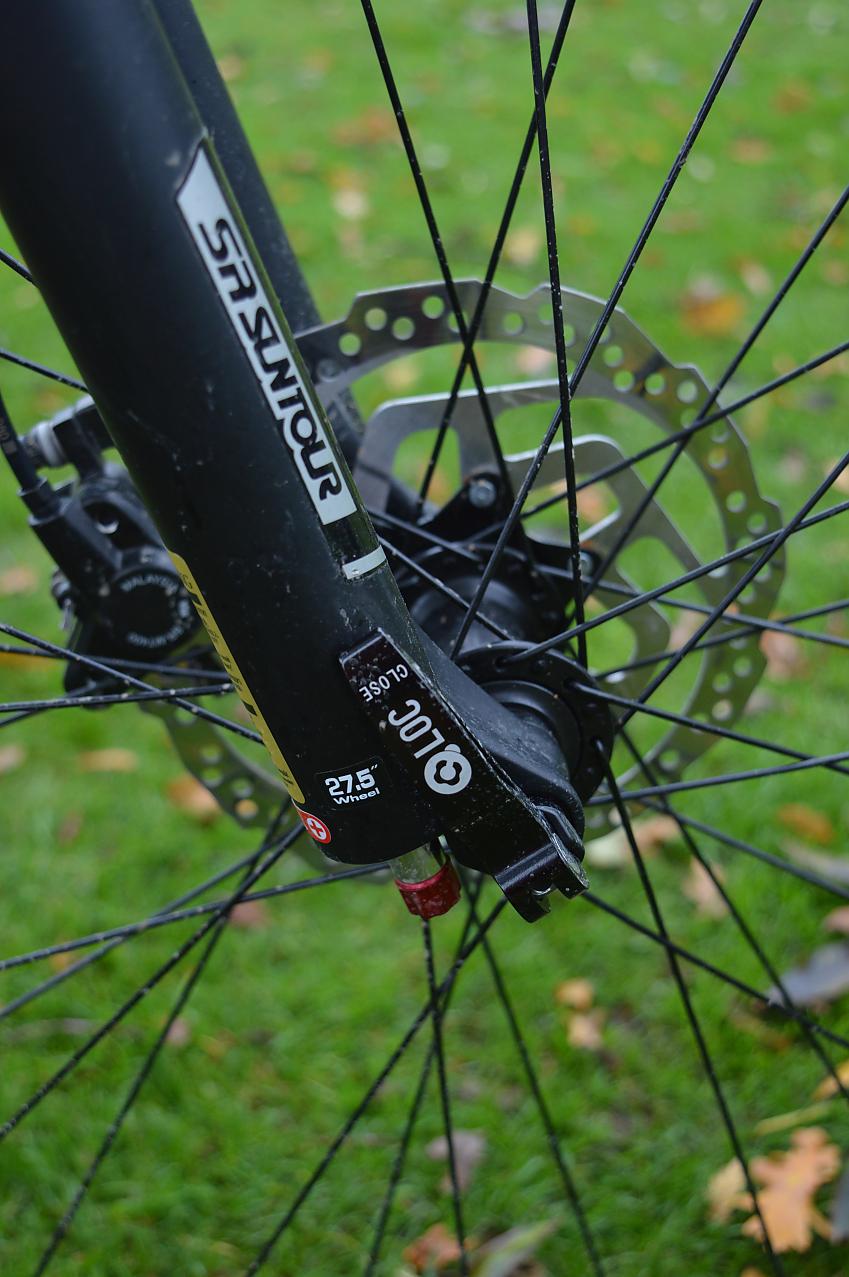 The Canyon’s fork is an SR Suntour XCR 32 with 100mm of air-sprung suspension. This is easily adjustable with a shock pump, which Canyon provides, so it can be set soft enough for a lightweight rider and firmed up as they grow.

On arrival, the test bike’s fork had a notable amount of stiction. It eased as the test progressed but never became as plush as the Whyte's RockShox. That’s not because it’s a Suntour fork – they make perfectly good ones – but because it sits at the bottom of the company’s air fork hierarchy. On a £1,000 bike, I’d want at least a Suntour Raidon.

The XCR fork has a 1 1/8in straight steerer. To swap it for a fork with a tapered steerer, you’d first need to fit an EC49/40 lower headset cup to the frame. The bearing would& then sit outside the head tube rather than internally and thus accommodate the 1 1/2in base of a tapered steerer.

The fork dropouts are 15×100mm and use Suntour’s Q-Loc fastening. This works fine – better than Manitou’s fiddly Hexlock system.

Even though it has ‘compact’ in its name, the Whyte is a much longer bike. A longer top tube and a head angle of just 64.5º put the front ;wheel way out front. It’s 90mm further forward than the Canyon’s, relative to the bottom bracket.

This should mean much less chance of the rider diving over the handlebar. A short& stem keeps the bar reach manageable; the Whyte fitted both testers well. 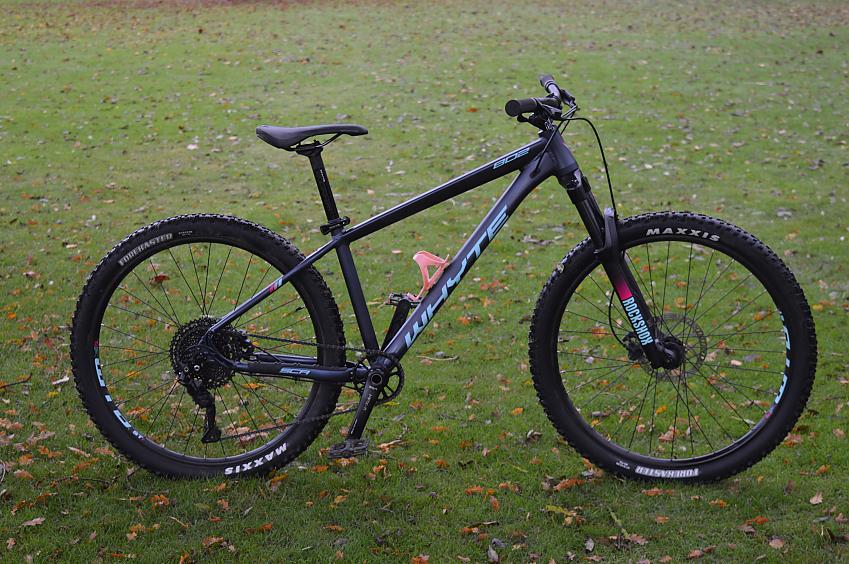 It doesn’t look like you can fit an internally routed dropper seatpost but you can. I quizzed Whyte designer Ian Alexander about this. He replied: “We use a BB shell design that has a bulbous inner section that allows internal clearance for the stealth dropper seat post cable to pass from the seat tube, through the BB shell, and up into the down tube.”

All that’s needed is a different grommet where the gear cable and brake hose enter the frame. 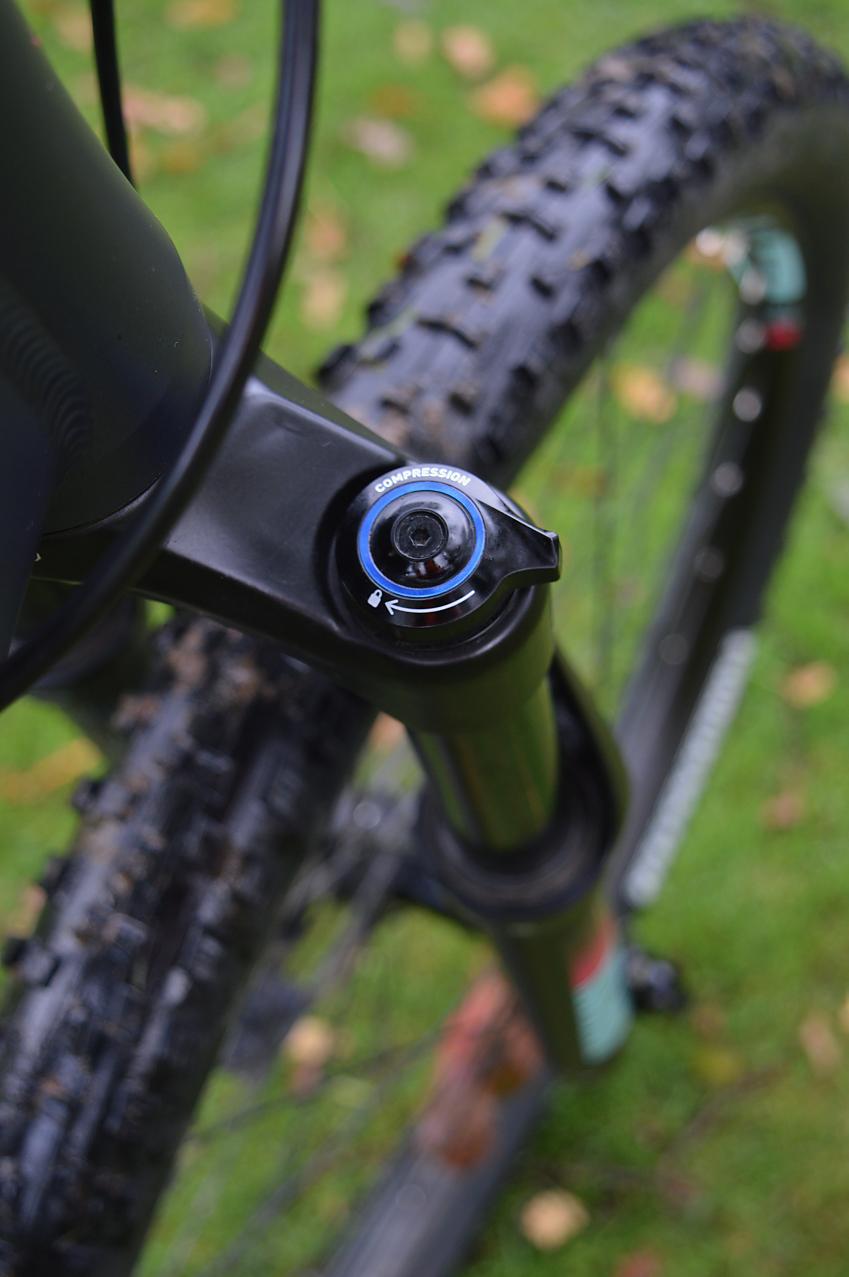 Simple low-speed compression adjustment, with a ‘blow off’ valve if you hit something hard locked out

The Whyte has a Boost (110mm axle) fork and Boost rear dropouts, which are 6mm wider than standard. In this case, that makes them 141mm wide as they’re ‘boosted 135mm’ dropouts rather than screw-through ones. This is a cost saving. 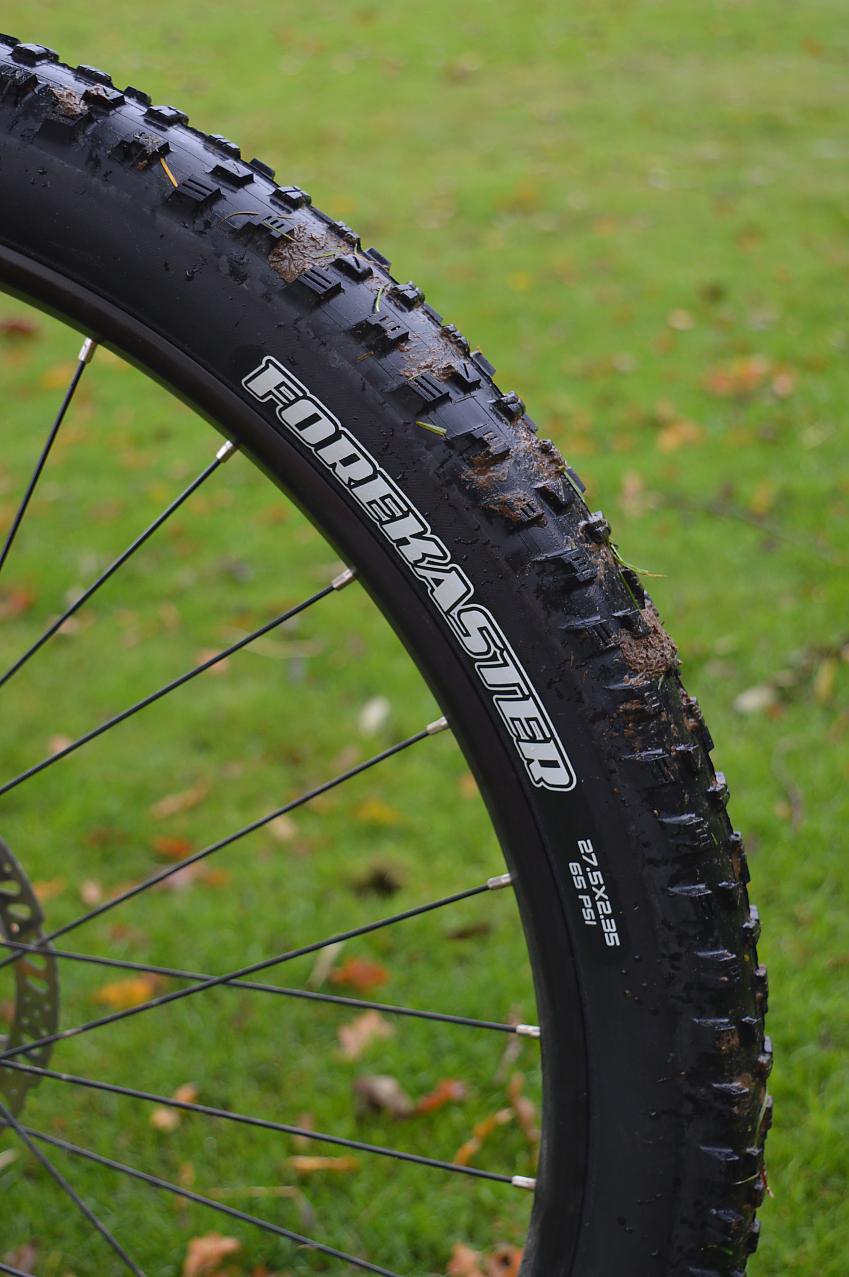 The Whyte’s tyres and rims are tubeless ready. There’s room to fit bigger tyres too – right up to 2.8in

Wider axles are nevertheless worth having. The hub flanges are further apart, which improves the lateral strength and stiffness of the wheels a little. And the fork legs, seatstays and chainstays are further apart, so there’s more tyre and mud clearance. Although it’s fitted with 2.35in tyres, the Whyte would comfortably take 2.6in or even 2.8in.

The Whyte’s 120mm RockShox Recon RL fork is superior to the Canyon’s XCR. It’s plusher and has better damping. It also makes the bike more ‘upgrade proof’ as it uses the steerer and axle standards of higher-end components.

Both bikes have 1× Shimano drivetrains. The difference is that the Canyon is 1×12, using an enormous 10-51 cassette and an XT rear mech, whereas the Whyte is 1×10, using a Deore rear mech and an 11-46 SunRace cassette.

Shifting is OK across the Whyte’s cassette and there are those (me!) who prefer 10-speed to 12. But it can’t be denied that the Canyon has a wider gear range and that its all-Shimano drivetrain offers slicker shifting.

The testers picked up on this. Jasmine said: “The Canyon was nicer going up hills and I found it had a better gear range. Even going down the hills the gears were a bit higher; on the Whyte, my legs were just spinning going downhill in top gear.”

Matilda added: “On the Whyte, the gears sometimes skipped when I was going up a hill. It was quite annoying when I was trying to push hard.” 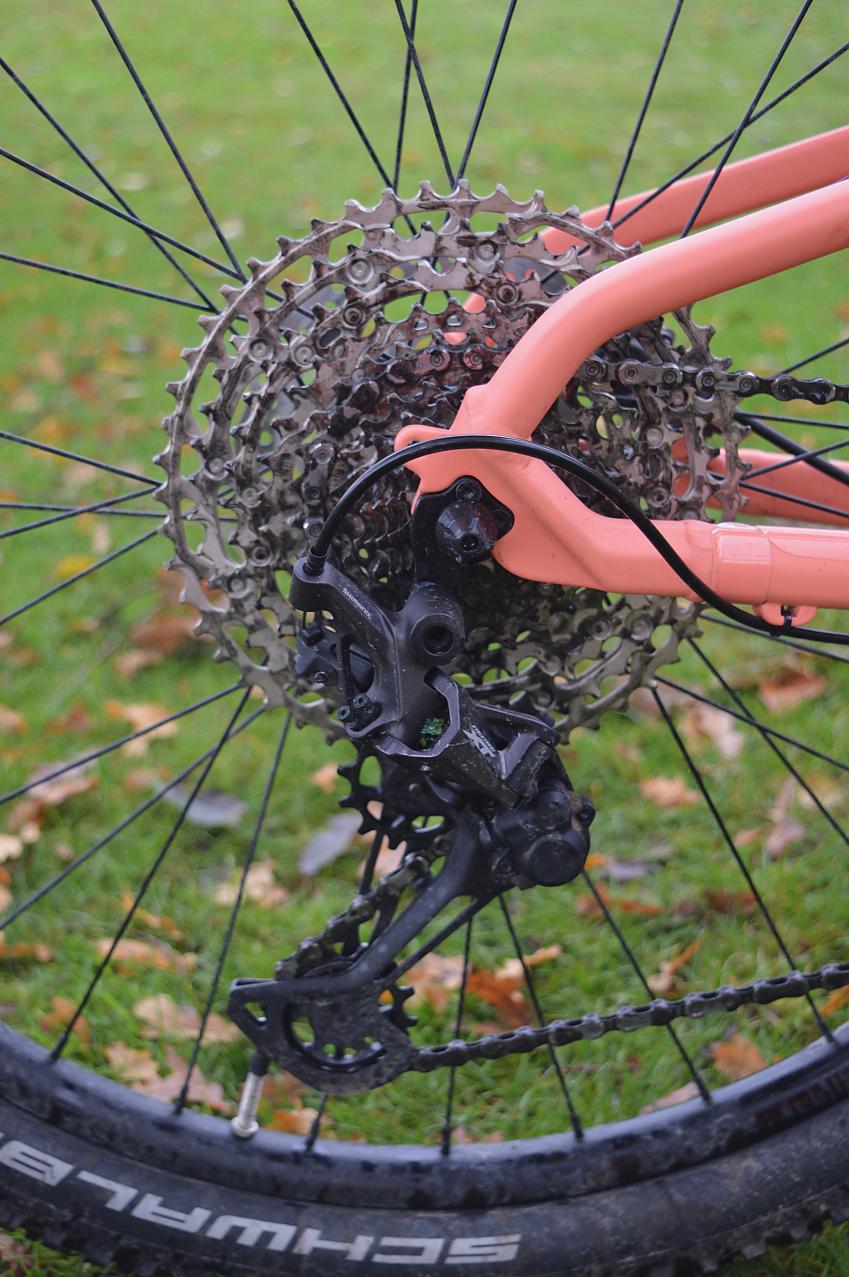 I’d have liked to have seen 165mm cranks rather than 170mm on bikes this size, to make pedalling more ergonomic and to reduce the chance of pedal strikes. Neither tester commented on this, however. Possibly they’re already accustomed to longer cranks.

Both bikes have reasonable tyres whose tread pattern might be described as ‘aggressive cross country’ or ‘all conditions’. The Maxxis Forekasters of the Whyte are tubeless ready, as are the rims, so a conversion would be straightforward.

The Canyon’s Schwalbe Tough Tom and Rapid Rob tyres aren’t tubeless ready. The Iridium DP25 rims (made by Alex) aren’t labelled as tubeless ready but feel like they are: the tyres were so tight I could barely get them off the rims. This would be a problem for anyone without a strong grip. 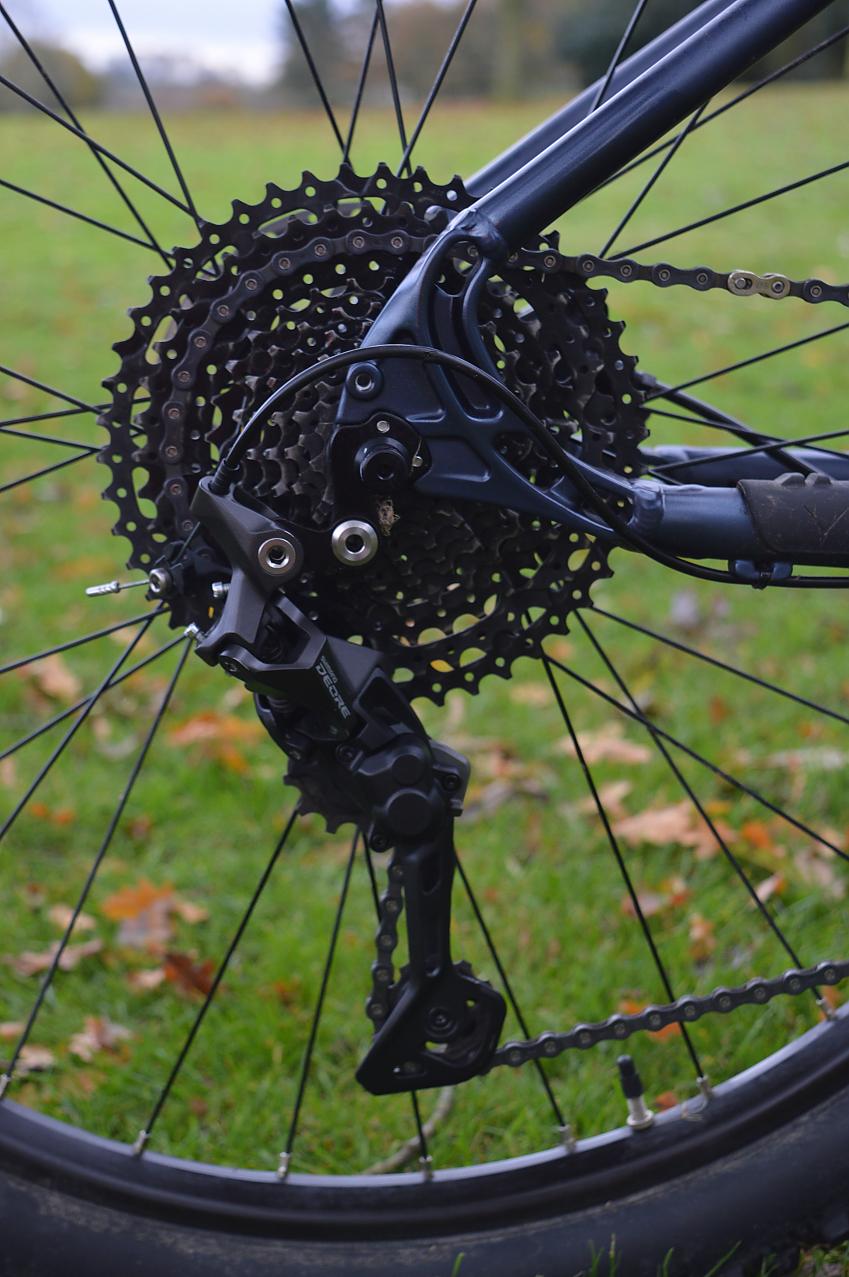 One minor annoyance with the Canyon was that the gear cable and brake hoses had been left too long. If you were buying in a shop, you could get these shortened at point of purchase. That’s not possible when your bike arrives in a box. You’d have to do it yourself or pay.

Jasmine’s dad Jay said: “I like the finishing touches on the Whyte – little details like the Union Jack on the seat clamp, the design on the head tube. They make the bike look more expensive than it is.”

With a wider handlebar, much more stabilising trail, a front wheel further out front and a better fork, the Whyte ought to be a more confidence-inspiring ride on more technical terrain. 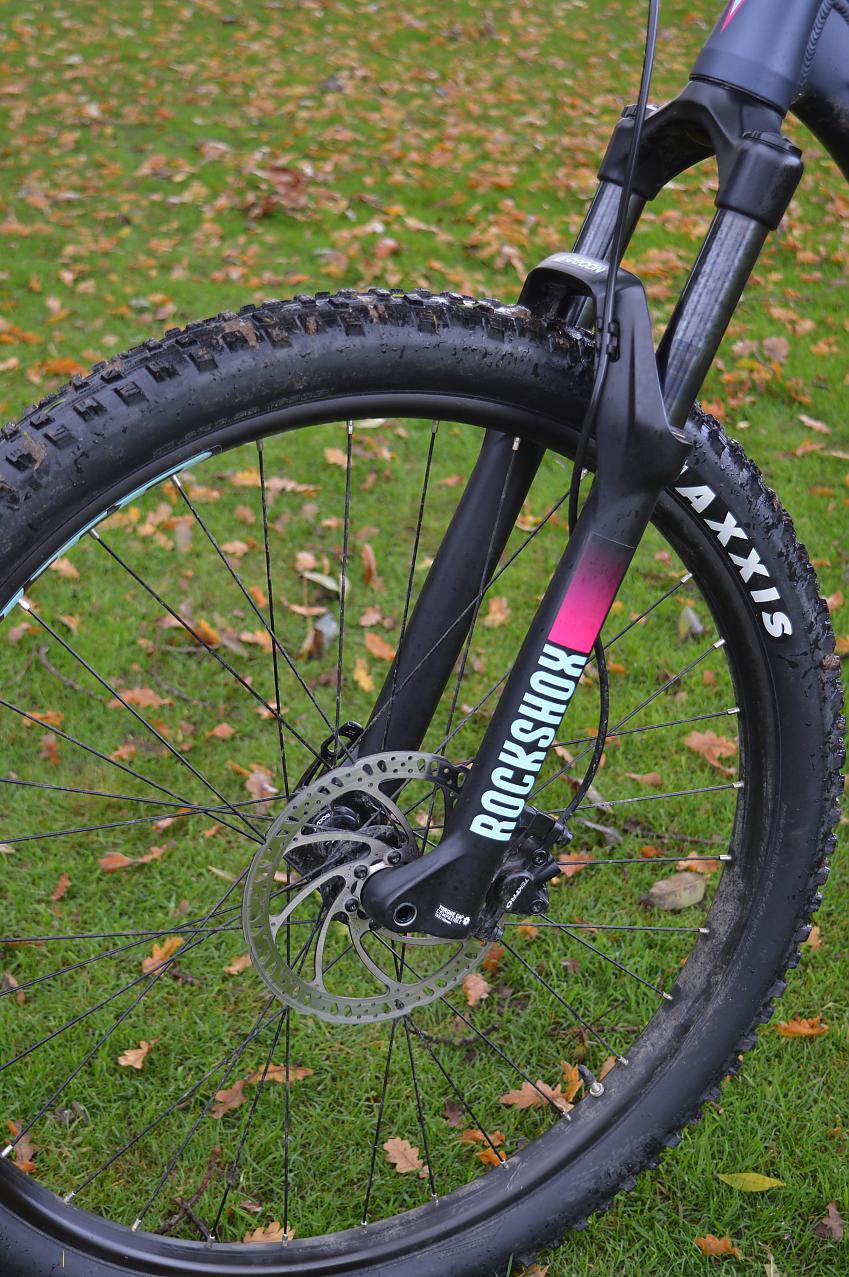 Comments from the testers bore this out. Jasmine said: “I preferred the Whyte. The suspension felt a lot smoother.”

Matilda said: “I liked how the Whyte rode; it was more smooth. The bars are wider on the Whyte so it’s easier to control. The Canyon was really small for me so it was hard to control.”

Matilda’s mum Katy thought that both bikes, at around 13kg, were heavy. “There were some bits in Cropton Forest where we had to get off and push,” she said, “and we swapped bikes so I could push the Whyte uphill because it was a lot heavier than my bike.” 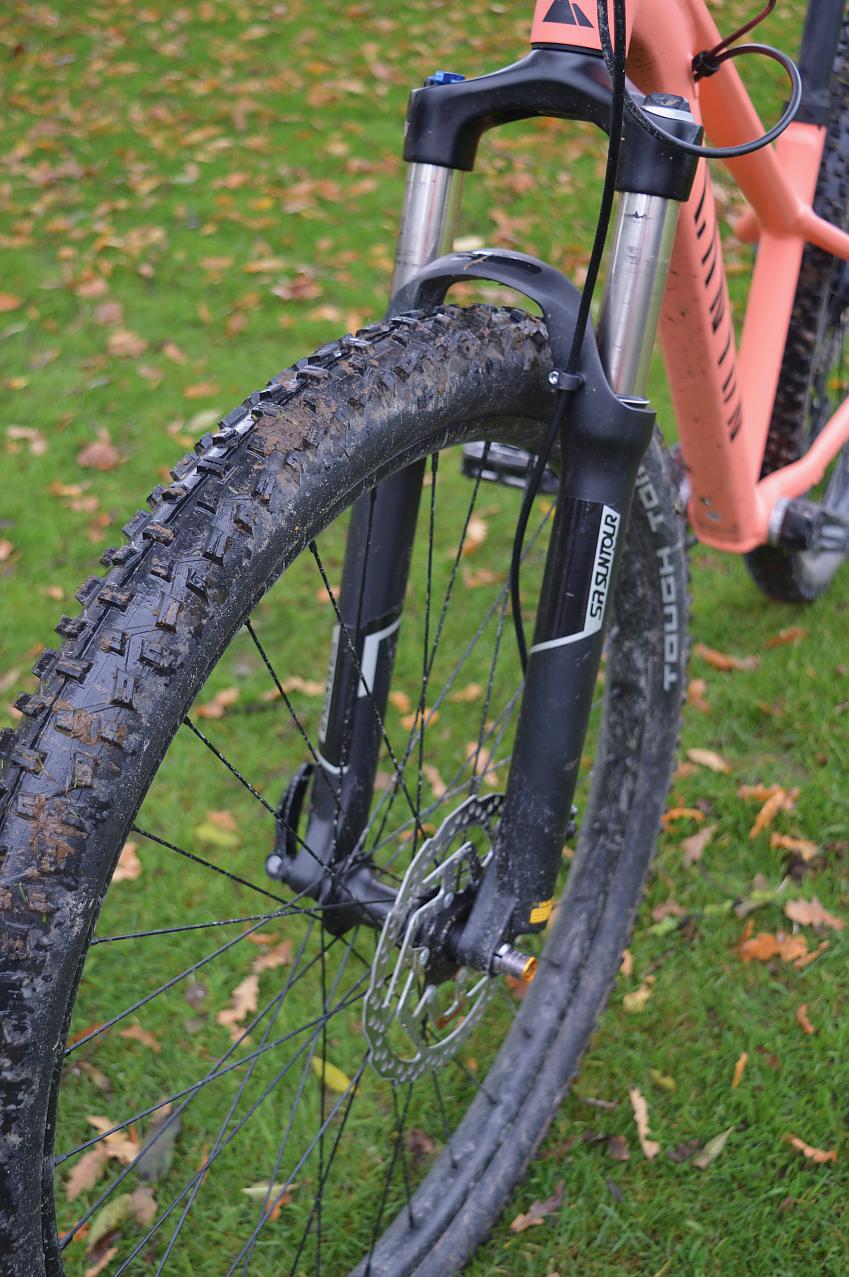 While 13kg is par for the course for a £1,000 hardtail these days, she has a point. The largest Islabikes Creig, which is roughly the size of the smallest (XXS) Canyon or Whyte (XS) and costs the same, tips the scales at only 11.6kg. It’s a big difference that’s worth having. Smaller riders need lighter bikes.

The Canyon isn’t a bad bike by any stretch, but the Whyte is clearly better. It’s a well-designed trail hardtail with unflappable handling, a good fork and masses of room for British mud or bigger tyres. The economies with the drivetrain and rear dropouts make little impact on performance.

The Canyon has a top-tier drivetrain, but it’s handicapped by the sizing information on Canyon’s website and by its second-best fork. Its geometry better suits less technical terrain, which might not be a deal breaker if your daughter or son isn’t the trail rider the Whyte is aimed at.

Just be sure to upsize – and if you can spend an extra £150, do so: the Grand Canyon 7 WMN has a better fork and a dropper seatpost. And it’s cyan blue, not pink… 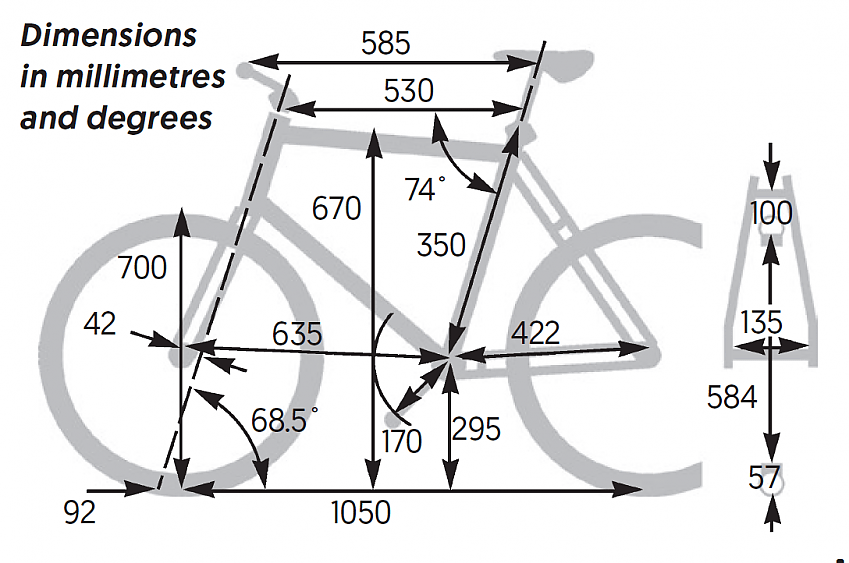 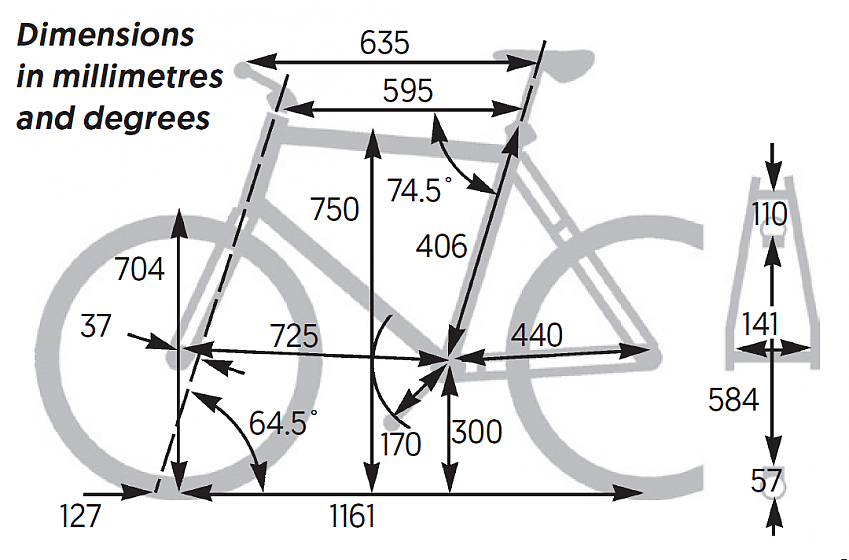 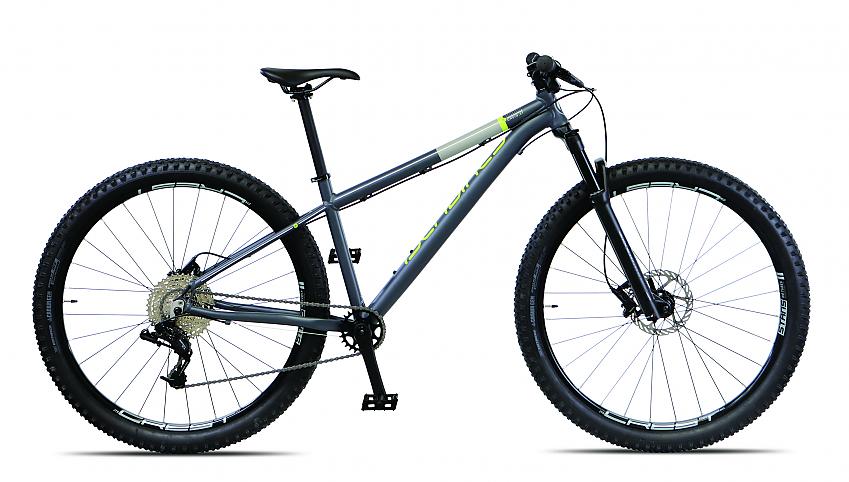 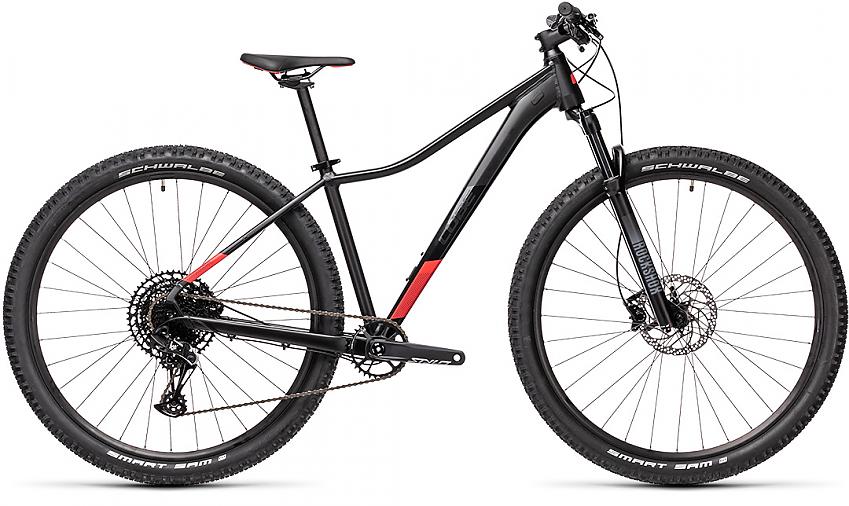 Advice on buying a Children's bike this Christmas View