In the summer of 2019, Jon Shaw cycled largely off-road from Lowestoft to Land’s End with his teenage son and daughter

The mountain biker who emerged from a gorse thicket on Cornwall’s Mulfra Hill looked sceptically at our bikes: a hybrid, a gravel bike, and an old 29er hardtail. “It’s a bit technical,” he said.

I assured him we didn’t mind walking and thanked him, relieved that we could carry on across the moor. I hadn’t been able to find on the ground the track I could see on my phone and OS map. It was the end of a long day, the end of a two-week bike trek, and the teens were hangry.

Up to that point we’d not fallen off once on our substantially off-road ride across England from Lowestoft to Land’s End. With 20 miles to go, that all changed! Fortunately we were cushioned by gorse…

We made it to Land’s End youth hostel in time for dinner.

When the kids were younger, we’d enjoyed a couple of cycle-camping trips with Cycling UK (then CTC). Since then I hadn’t manage to persuade them to cycle any further than school, apart from a weekend ride across Suffolk’s sandy heaths. But as neither had any plans for the summer, I shared my dream of a furthest-east to furthest-west coast-to-coast, as much of it as possible off-road. They bought into it. Not long after my son had finished his GCSEs and my daughter was back from her first year at uni, we were on our way…

A biting wind whipping across the North Sea accompanied us at the start from Lowestoft’s Ness Point. As it wasn’t a headwind and wasn’t raining, we counted our blessings and set off towards Southwold. From there we followed the rideable parts of the Sandlings Way. 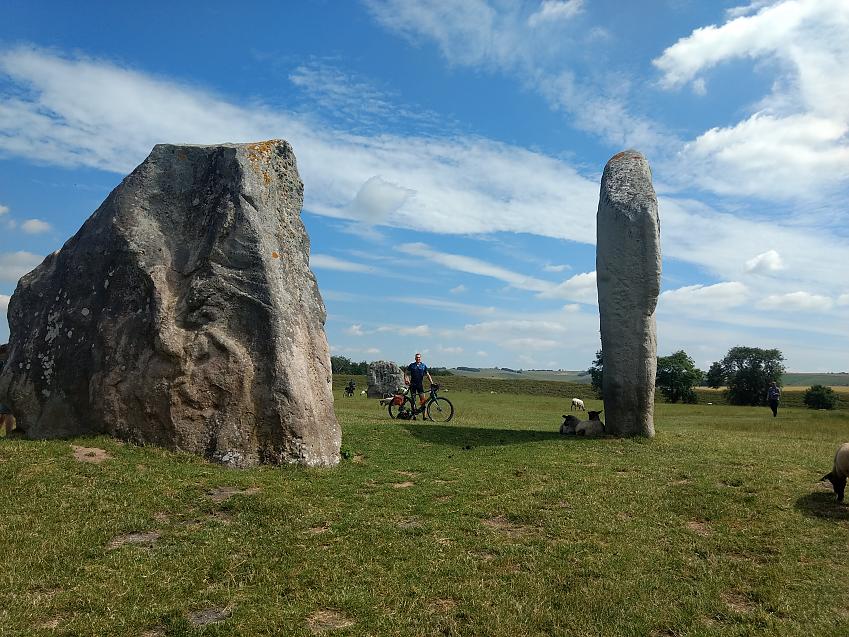 Jon posing at the Neolithic henge monument at Avebury

Away from the coast, the sun warmed us. Yet by Woodbridge we were tired and the teens were wondering if they’d bitten off more than they could chew. Pep-talk time. I explained that, unlike me – a 50-something office worker who had been training for this – they, being young, would soon grow strong as they put the miles behind them. This was partly why we started in the east. It gave us a chance to develop our cycling legs before the hilly challenges of the Ridgeway, Devon and Cornwall.

The following days took us through Braintree on minor roads before the next off-road leg along the Flitch Way. In Essex we passed cricketers in white flannels on the greens, then headed into London along the tranquil Lee Valley. It slowly changed from verdant through industrial to the steel and glass of Canary Wharf.

London on a bike isn’t a typical holiday-fun recipe, but there’s lots to see and plenty of cycle routes. We followed the Grand Union Canal to Windsor, where we caught the glorious pomp of a military band marching to Windsor Castle.

The long climb out of Streatley onto the chalk of the Ridgeway was our first proper hill. Suffolk-born teens were unconvinced that this was not particularly steep!

It felt like our adventure ride had really begun when we adjusted our tyre pressures down to cope with the rough stuff. The teens thought this was another crazy-dad-idea that would just make it more difficult, but even the hybrid’s modest 37mm tyres gave an improved ride when easily thumb-squashy. Packing light and riding cautiously downhill helped us avoid pinch-flats.

The route to Marlborough is a gem of an off-road route that should be on every cyclist’s bucket list. The track was well signed, challenging enough for a family of our off-road-beginner ability, and deserted for long stretches. We only saw other people at the tourist-marked hill forts and chalk white horses that dot the route.

Wiltshire passed beneath our wheels, while buzzards circled on thermals in the sky

We travelled through the heart of England with the sun on our backs. Berkshire, Oxfordshire and Wiltshire passed beneath our wheels, while buzzards circled on thermals in the sky.

After a day of rest and bike maintenance (including a new bottom bracket), the Avebury standing stones heralded the Wessex Ridgeway.

This looks promising on the map but we found it poorly signed (some deliberately vandalised), badly maintained, and overgrown. It was too easy to stray from the right path, and too many times we ended up walking our bikes along overgrown bridleways that stung and scratched us. No horse could have navigated the route without injury.

Each diversion cost us precious time, so we used Google Maps to find direct routes when we were too far behind schedule. The alternatives were often scenic but not always suitable for cycling. Some had kissing gates we had to heft our bikes over. 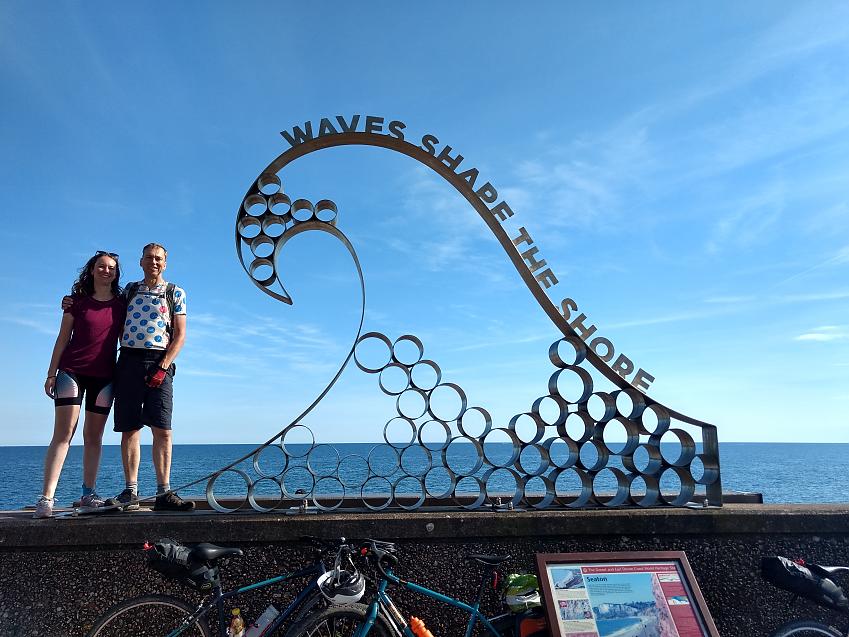 Jon and his daughter at Sea wall at Seaton.

We whizzed past the army ranges on Salisbury Plain, enjoying the expansive views. Next we rode through Warminster, then some boggy woodland, and crossed the busy A303. This took us to the beautiful village of Hindon, where a family cheered us as we passed them on the climb out of the village.

And so into Dorset. After admiring the Cerne Abbas Giant, we struggled through a field of oilseed rape. We tortured our brakes on the descent into Lyme Regis and finished our day at a beach-side pub on the Cobb. There we lost a hard-earned slice of pizza to a well-honed dive from a wily herring gull, who knocked it onto the floor, gathered what he wanted, and flew off while we looked on agog.

The next day was theoretically a rest day: we had only nine miles to ride to reach Beer. But we hadn’t anticipated the difficulty of the climb out of Lyme Regis from a cold start. Legs and lungs burned briefly, and tempers flared. I wondered how we would cope with the chevron-marked gradients ahead. However, our spirits revived as we admired the view down to the sea on the descent into Seaton.

At Beer youth hostel we met a cyclist at who had started from Land’s End but abandoned his planned trip to John o’ Groats due to the weather forecast. He was heading home to East Anglia. We recommended visiting Lowestoft to mirror our route!

From Beer we followed the Jurassic Coast on NCN Route 2 through Sidmouth to Exmouth, and then along the river into Exeter. I managed to choose somewhere to stay at the highest point in the city; elevation is not often mentioned on Airbnb!

The road to the north of Dartmoor was the only other time we came across long-distance cyclists. In closely-spaced small groups of six to ten, they were heading east, presumably riding LEJOG.

I had considered taking an off-road route across the moor but decided against it. It was too great a challenge for our abilities, our bikes, and the uncertainty that the weather might throw in. From Okehampton, we swung south on NCN Route 27, which followed an old railway line over the breathtaking Meldon Viaduct.

We passed to the south of Bodmin Moor. At Pensilva, we rode up a chevron-marked 200-metre climb without stopping and were rewarded with amazing views. Many more steep climbs and descents followed. The teens observed that nowhere was flat in Cornwall.

As planned, however, the east-west route had developed our fitness and we rarely dismounted on climbs, instead challenging each other to the top. As I was carrying the lion’s share of the baggage, I always claimed the moral victory!

Luggage-wise, we packed light. The teens each had a ten-litre seatpack for a change of clothes and toiletries, while I had a rack and small panniers and carried everything else – including crocs for the evenings, waterproofs, first aid kit, tools, spare tubes, and bike locks. I was always more heavily laden in the mornings, as I carried food and drink for the day in a handlebar pack probably intended for a bikepacker’s tent. My load also increased as we travelled west: having a geology student in the posse meant we began acquiring interesting rocks on the way, including some fossils from Lyme Regis. 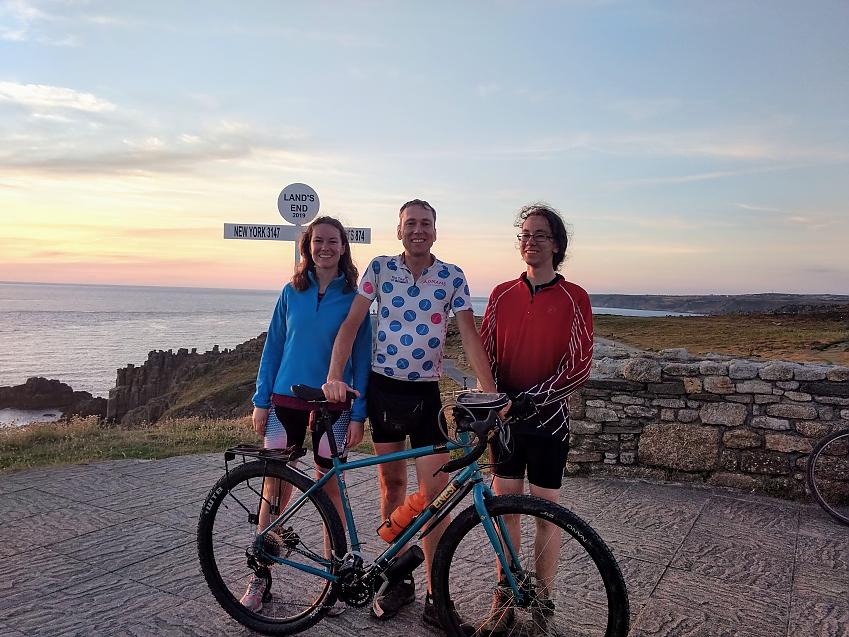 Jon and his children reach Land’s End at last!

Much of our route through Cornwall was on sunken lanes full of moisture-loving plants. The hedgerows were like an elongated Eden Project. To the west of Truro, around Redruth and Camborne, we passed former mines and their workings. It was such a contrast with the postcard-perfect coast.

The moors to the north of Penzance were a deserted wilderness. Thanks to our chance meeting with the mountain biker at Mulfra, we made it to Land’s End youth hostel without admitting defeat and going through the city.

I rallied the team after we ate at the hostel and we headed to England’s most westerly point. There we enjoyed a spectacular sunset and reflected on our trip with a huge sense of weary joy and achievement: 585 miles across England at its widest, about half of that off-road. It remains the longest trip we have ever made by bike, by a huge margin for the teens.

Do it yourself: Route planning

I spent many evenings studying maps, assessing published routes, and stitching them together. I used Bike Hike for views of OpenStreetMap and OS mapping. To choose routes between unknown places, I mostly used cycle. travel/map along with Cycle Streets. Google Maps and its Streetview function were also useful – for example, to find the speed limit on a section of road or view a turning.

We stayed in places with bike shops and a choice of places to eat nearby. We were on a schedule as I’d booked train tickets from Penzance. I’d also booked most of the accommodation. One town was booked out due to a festival, so we had to cycle to the next town along.

Conditions: Hot (often 30ºC or more) with generally light winds. We were lucky – expect rain and some headwinds.

I’m glad we had: GPS on the phone with audio prompts, paper OS maps, high-factor suncream, large water bottles and hydration packs. Also accommodation near near bike shops for unplanned maintenance and use of track pumps!

Next time I would: Complete the whole Wessex Ridgeway, cross Dartmoor off-road, and start earlier each day to give more time for sightseeing.

There's more information and photos with detailed route descriptions on their own website.