Devanshi has learned to fix a puncture
By claire
Wednesday, 23 August 2017

Devanshi Vyas used to cycle to work but stopped when she moved to Edinburgh, but a visit to the Big Bike Revival event in West Lothian has given her inspiration, guidance and confidence to get back into a cycling commute. We caught up with her to learn more about her story, the barriers she faces to cycling and her future plans.

Devanshi’s cycling story started in India, where she learned to ride a bike when she was a child. When she was young, she would ride to school every day on her bike – a total of 12 miles. As an adult, Devanshi moved to London and stopped cycling because the public transport and walking was very good in London, and she did not want to cycle in the conditions on the road. “A lot of people did not have a good time cycling in London and I didn’t want to do it,” she told us.

"The Big Bike Revival events have helped me with advice to get a more appropriate bike for cycling in Edinburgh, and I’ve learned to fix a puncture and boost my confidence."

Six years ago Devanshi moved to Edinburgh from York and stopped cycling. There were several barriers that stopped her – some of the city is hilly and it was off-putting for Devanshi to cycle up and down the hilly terrain, especially in traffic. The weather was also a barrier.

Devanshi also has a daughter called Lucy, who is just under 2 years old. The logistics of working 30 hours a week coupled with dropping off and picking up her daughter from childcare is a big issue in preventing her from cycling for everyday journeys.

“Lucy is learning to cycle on her balance bike and I really enjoy cycling as a family, but the logistics of childcare mean I just don’t have the time to dedicate to cycling,” she explained. “Once I go full time up to 35 hours a week things will be much more manageable and I will be able to start cycling to work.”

The Big Bike Revival came along at a good time for Devanshi. “I went along to the Kirknewton Community Development Trust’s event with my £15 bike,” she said. “There was a mechanic there from Dr Bike and I got lots of good advice from him on the best kind of bike for cycling to and from work. My current bike is heavy and makes cycling hard work, so once I go back to full time I will access the cycle to work scheme and get a lighter bike. The mechanic was so helpful and really friendly, and he looked over my current bike and made sure it was safe to ride.”

Devanshi also had the opportunity to learn how to fix her own bike with the Big Bike Revival, learning new skills to support her cycling. “I spent two hours with one of the staff at the event. He taught me how to change a puncture and was so patient and helpful.” 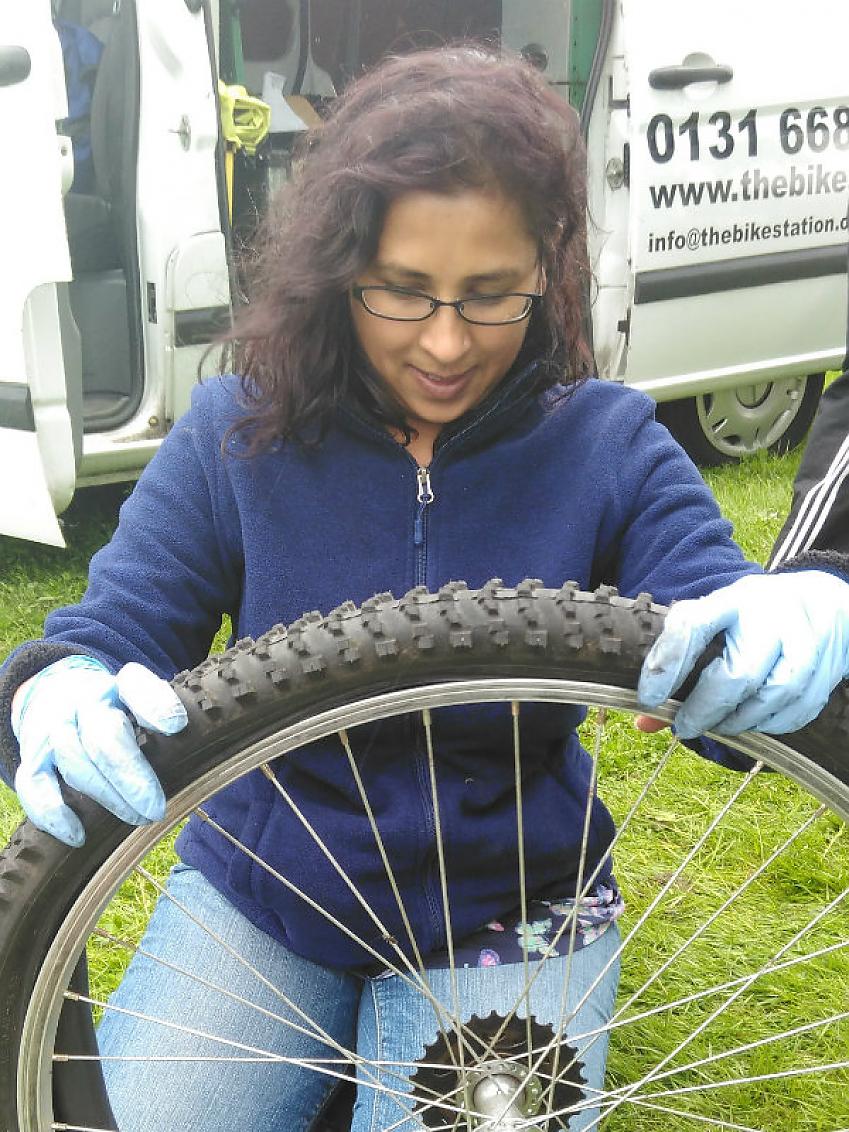 Devanshi is very clear that if there was better infrastructure in her local community she would cycle to work every day. She feels that dedicated space for cycling would make a significant impact on her cycling as well as other people’s.

“It wouldn’t matter about weather conditions – I would ride to work every day if there was a path separate from traffic,” she stated. “Where I live in West Lothian, I could take the canal to work but it’s indirect and would add a lot of time to the commute. It is a six mile journey which is my perfect distance, but the A71 road is the direct route which is extremely busy with traffic and I would never, ever cycle on it.

"There is a path that is overgrown and never used but if it was cleared up and all the overgrown plants removed then it would be a perfect route for me to cycle to work and I’d ride it every day. It would be better for drivers also as they wouldn’t get frustrated if bicycles were given their own space. I have suggested this to my local authority before and would really like to see it happen. In York so many people cycled to work because of the cycle path. I’d love to see that here, too.”

Despite the difficulty of getting to work, Devanshi is still committed to exploring a cycling commute. “The Big Bike Revival events have helped me with advice to get a more appropriate bike for cycling in Edinburgh, and I’ve learned to fix a puncture and boost my confidence. I have to say that everyone’s patience while I was learning was fantastic. Once I am working full-time again I will get myself a new bike and start cycling to work. I love the feeling of the wind in my hair!”

Disabled cycling group reflects on a year to remember View

Coping with MS through cycling View

Video: England's Big Bike Revival View
You too can champion cycling in the UK
Give your support today to help Cycling UK’s charitable work tomorrow. We double every pound you give through other sources to help change lives and communities through cycling.
Volunteer now
Cycling UK continues to support the UK to cycle
This remains true during this difficult period with the ongoing threat of coronavirus Covid-19
Read our latest advice on cycling
Join Cycling UK to help us change lives and communities through cycling
Membership gives you peace of mind insurance, discounts in cycle shops, rides & routes
Join now