This Veganuary, Cycling UK's communications officer and vegan, Christina Bengston takes a look at why veganism is becoming so popular and gets some tips on cycling as a vegan

Veganuary and the rise in veganism

In 1998 I was 16-years-old, and, after being a vegetarian for nearly ten years, I decided to go vegan. I made the decision primarily because of concerns about animal welfare, but I was also aware of the massive environmental impacts the animal farming industry has on our climate.

Going vegan in the late 90s was tough; food options were limited. You couldn’t get vegan cheese or chocolate from a supermarket, and if you wanted to pick up some vegan burgers or slices of ‘cheatin’ chicken for your sandwiches, you had to find your local health food shop and cross your fingers.

But the days of chips and green salad being the only restaurant option are well and truly over, as veganism is becoming more and more popular. A YouGov poll conducted on behalf of organisation, Veganuary found that over a third of people in the UK are interested in trying or plan to try a plant-based diet. The number of vegans in Great Britain has quadrupled since 2014, from 150,000 to 600,000 in 2019 and last year over 580,000 people made the pledge to try vegan for the month. 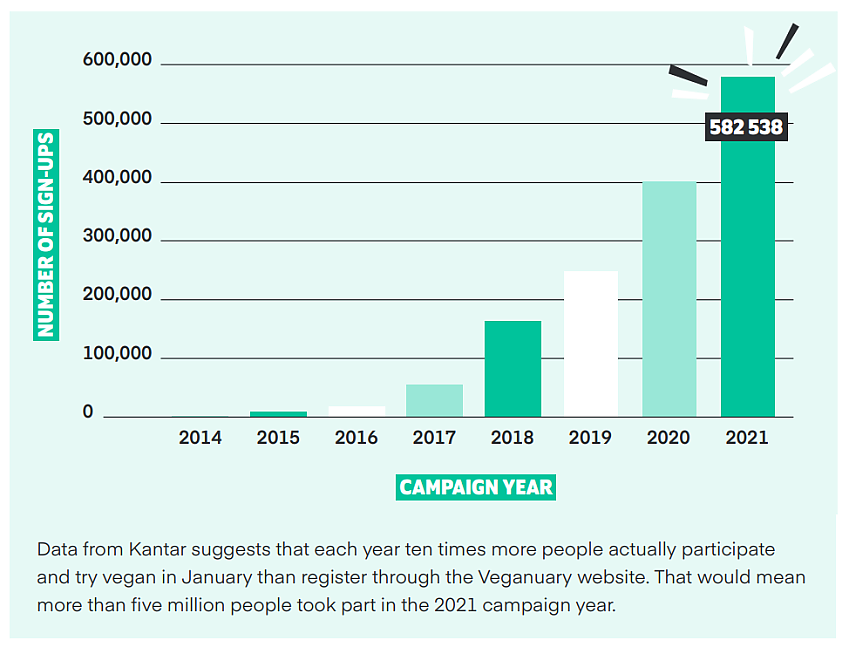 What is a vegan?

Despite veganism being around for thousands of years – with the first mention believed to be from the Greek philosopher and mathematician Pythagoras of Samos around 500 BCE – the term vegan was not coined until 1944 when six dairy-free vegetarians met and formed a group to promote a lifestyle free from animal exploitation. They called it the Vegan Society - a movement began.

The Vegan Society defines veganism as:

"A philosophy and way of living which seeks to exclude—as far as is possible and practicable—all forms of exploitation of, and cruelty to, animals for food, clothing or any other purpose; and by extension, promotes the development and use of animal-free alternatives for the benefit of animals, humans and the environment. In dietary terms it denotes the practice of dispensing with all products derived wholly or partly from animals."

Since 2014, the non-profit organisation, Veganuary has been promoting veganism, encouraging people to try it for January and beyond.

According to the organisation, they have supported over one million people in 192 countries to try veganism.

There are still many misconceptions about veganism. Let’s look at some of the common comments and questions vegan’s are often asked.

1. You can’t be getting enough protein without meat, are you taking supplements?

It’s actually pretty easy to eat enough protein, assuming you have a balanced and varied diet. Protein is in soybeans, lentils, most varieties of beans, nuts, peas and legumes.

If you’re thinking about switching to a vegan diet or you want to cut down on your meat consumption and you’re concerned about protein, have a read of these articles below.

2. But don’t we need dairy to get enough calcium?

No. The NHS states on its website that “With good planning and an understanding of what makes up a healthy, balanced vegan diet, you can get all the nutrients your body needs.” This includes calcium which vegans get from green leafy vegetables, fortified soya, oat or rice drinks, sesame seeds, tahini, pulses, dried fruits.

3. If you’re a vegan for the planet what about the destruction of rainforests to produce soybean?

Huge areas of rainforest – particularly in Brazil and Argentina - are being destroyed to grow soybean.

But all that soybean is not just going to make vegan burgers and soya milk. 90% of all soya is fed to chickens, pigs and cows. Only 6% is eaten by humans.

4. If you’re a vegan why eat things that look like meat?

Most people who avoid eating meat and dairy products are not doing so because they don’t like the taste or texture. The most common reasons for people trying or living by veganism are animal welfare, health and the environment.

For me, many of these ‘fake’ meat products taste delicious, it’s that simple.

For others, converting from a meat to non-meat diet can seem daunting, and these products look and taste familiar to people, making the transition easier.

British designer Giles Mitchell has written an interesting article on skeuomorphism (an object which imitates the design of a similar artefact made from another material) in relation to vegan fake meat.

This all depends on what you buy.

As the number of vegans has increased, the number of products has also increased and the price for many items has reduced. It’s true that some processed products are still slightly more expensive than their meat or dairy alternatives, but this difference has reduced significantly over recent years.

If you’re looking to shop on a budget, the Vegan Society has lots of information.

There are now many professional and elite athletes who've decided to follow a vegan diet for either health benefits or for ethical reasons. You'll find vegans in every major sport, from tennis player Venus Williams, to boxer David Haye. Here are just a few of the vegan cyclists:

Most of us don't need to eat like an elite athlete to get a good balanced diet. If you're thinking about switching to a plant-based diet, or if you're simply considering eating less meat, I spoke to a few other vegan Cycling UK staff members to get their top tips.

Generally, the accepted definition is that you strive to be vegan but there are occasions when you just won't be able to be. Don't be too hard on yourself

Don’t bite off more than you can chew

Campaigns officer, Sophie Gordon has been a vegan for the past four years. She said: “don’t feel you have to do it all at once; you can do it gradually. It took me five years to go full vegan. I started off just choosing a vegan option at a café if there was one, and cooking more vegan food at home."

“It’s ok as an occasional treat, but if you're only eating fake meat and dairy you may find the transition difficult."

Sophie added, “It's definitely much easier to be a vegan now. You can buy everything in the supermarkets, so you can have fun trying lots of new products. You might like some more than others. It’s really a new world of discovery; learning about new recipes and new ways of eating and preparing things. Have fun with it."

Be your own vegan

Tom said “You don’t have to be perfect. Veganism often goes hand in hand with lots of other environmental causes. Don't get too bogged down in it all. Do what you feel comfortable doing. If you ride a bike you're doing a lot of good for the planet already.”

Cherry added, "I get slightly irritated when people tell me what being a vegan means. It's up to me really as to what it means to me. Generally, the accepted definition is that you strive to be vegan but there are occasions when you just won't be able to be. Don't be too hard on yourself."

Sophie said: "Keep it simple. Fad diets come and go, remember it's better to make small lasting changes. Just try not to eat too much processed food, but don't forget to treat yourself every now and then."

Tom added: “You don’t have to head straight to the free-from section. Remember, the biggest vegan section in the supermarket is at the front - the fruit and veg aisle."

Our staff were all in agreement on what to eat before a cycle ride, porridge. Porridge and fruit, porridge and nuts, porridge and golden syrup, or coconut butter. The combinations are endless, as long as there's porridge.

Tom does mostly road cycling and cyclocross, and usually rides between 50 and 100 miles. His favourite cycling snack is the old American classic; peanut butter and jam sandwiches.

"You've got loads of simple carbs and fats to keep you full" Tom says. "If you use sandwich thins they are the perfect size to fit in a cycling jersey. You can get three or four stacked up in there. It's like they are tailor made for cyclists."

Sophie describes her cycling as bimbling. She rides mostly off-road and along cycle lanes and bridleways. A typical ride for her is between 20 and 50 miles.

Sophie's go-to cycle snack is her home made healthy muesli bars. She mixes together; oats, muesli and nuts, then mashes in a banana and some fruit juice. You can try Cycling UK's granola bar recipe, just swap the butter for a dairy-free alternative, like dairy-free margarine. Or if you're not keen on making your own bars, Cycling UK reviewed some popular shop bought bars.

Cherry is predominantly a commuter cyclist. Before the pandemic she'd cycle around 40 minutes per day to and from the office, so she wouldn't usually eat on her ride. "I used to get quite hungry though when I got to work and this is not a nutritional tip but I would frequently eat my lunch not long after I'd arrive, as a late breakfast."

Tom, Sophie, and Cherry have shared some of their favourite after ride recipes with us:

What’s actually on your bike might not be something that immediately comes to mind when you’re considering going vegan, but if you’re replacing your panier or saddle bags, or thinking about getting a new bike seat, it might be something you want to think about.

Many bike seats will be made out of leather, but with a bit of research you can find a range of vegan options. Don’t be afraid to ask the manufacturer, or at your local bike shop what your new seat is made from.

Veganism is on the rise and it's becoming much easier to either cut down on meat consumption, or entirely. Whether you're making a change for your health, the environment or animal welfare, there's never been a better time to try veganism.

"People think that being a vegan is a huge challenge, but it really isn't" says Cherry.

If you're looking for more support on making changes to your diet, Veganuary has lots of advice to help you.