Plans for the Saints Trails - a £19m network of traffic-free trails - were announced last year by Cornwall Council and Highways England, thanks to the tireless advocacy work by Truro Cycle Campaign. John Wetherill, from the campaign group explains the long road to success, and how you can mobilise people to support your cause.

Truro Cycling Campaign are proud to have contributed to the development of this project, by highlighting a level of support for cycling, which helped the Council attract the wider and very significant funding award for the Saints Trails, according to the Council. 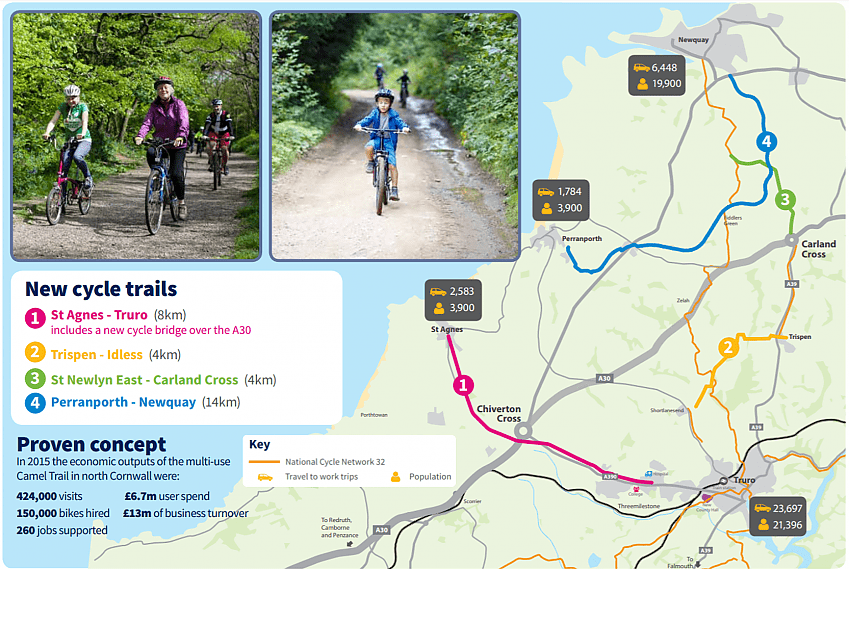 We didn’t start out with this goal in mind. Most of our campaign actions were focused on a single bridge at Cornwall’s busiest junction.

Inspired by a Cycling UK 'Space for Cycling' conference in Plymouth, a group of us formed Truro Cycling Campaign in February 2017. Our beginning was timely – before the end of the year we would be involved in a major campaign.

We were invited to attend a Cycling Workshop held by Highways England, on their proposed road improvement scheme for the A30 between Carland Cross and Chiverton Cross. This £290 million scheme for dualling the last remaining section of single carriageway included the development of a new roundabout junction at Chiverton.

This - the busiest junction in Cornwall - has become a significant barrier to cycling. It lies on the direct alignment between St Agnes, a growing parish of 7,000 people, and Truro, the county’s prime commuter destination.

The 6 mile route between the two areas is relatively flat for Cornwall, and includes several large trip generators such as a hospital, college, secondary school and business park. The 2011 census recorded 1,000 daily commuting trips from St Agnes.

The ‘worst place for incidents in the whole of Cornwall’

We were shocked that the plans to be presented for public consultation between late January and March 2018 did not include a grade separated cycle crossing such as a bridge, or underpass.

Highways England justified this by saying that not many cyclists used the present junction, although they would later refer to it as the 'worst place for road incidents in the whole of Cornwall'.

However, there was a prospect of building a Chiverton cycle bridge using 'Designated Funds', a Highways England pot of money for projects which provide improvements in the vicinity of major road schemes.

The sticking point was there was no guarantee that a bridge could be delivered in the short spend deadline of March 2021. However, the Designated Funds could be used for a cycle path on either side of the bridge linking St Agnes and Truro.

We knew that numbers would count. We had just a few weeks to get as many people as possible to respond to the consultation and demand that a crossing be put into the main scheme, to connect the paths built with Designated Funds.

Our opener was a rally at Chiverton Cross roundabout just before the consultation began. We used the contacts we had developed, our Facebook group, a free St Agnes newspaper, and flyers to publicise the rally. We made placards and had a couple of photographers at hand.

We were astonished when over a hundred people turned out on that grey winter's day. The pictures taken were a crucial kickstart for our website, social media, and for the local press. They proved to others that they wouldn’t be alone in responding. 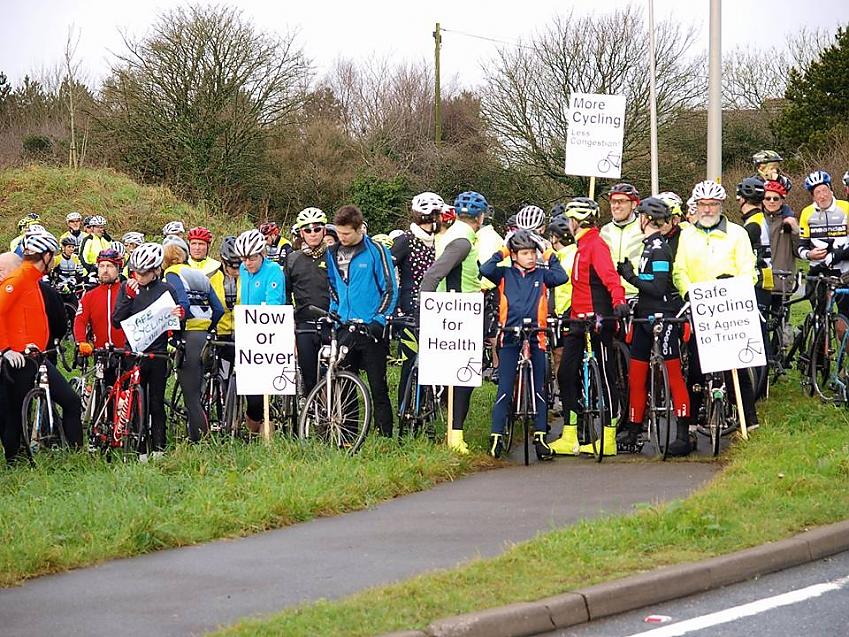 At the same time we created a 'St Agnes to Truro' page on our website where we put all our arguments. It quoted from Highways England's own Design Manual which stated, for example, the need to include ‘a review of significant local trip generators and amenities in the area surrounding the highway scheme to identify likely desire lines for pedestrians, cyclists and equestrians’.

We also pointed to the DfT funded Propensity to Cycle study, which predicts that cycle to work rates could rise to up to 23% along a large proportion of this route when combining Dutch level provision and the use of e-bikes.

We had a graphic of a 'St Agnes to Truro Cycle Highway' produced, and also encouraged people to back other pro-cycling measures such as making the present A30 section cycle-friendly once it was 'detrunked'.

We encouraged people not to be intimidated by the thought of responding to the consultation in their own words. We were aware of responses to other consultations being disregarded if they just repeated a template, so we emphasised that a response could be short and done in a minute or two.

We put links to our website page onto our Facebook group, into flyers and importantly into 'group' emails which we wrote to organisations and large workplaces such as the city council, the college and hospital so that they could be simply forwarded on to all staff.

Towards the end of the consultation period, we organised another publicity event, with riders taking the graphic of the cycle highway along its route, sent off by a gathering in St Agnes and received by another in Truro, including the city's mayor. 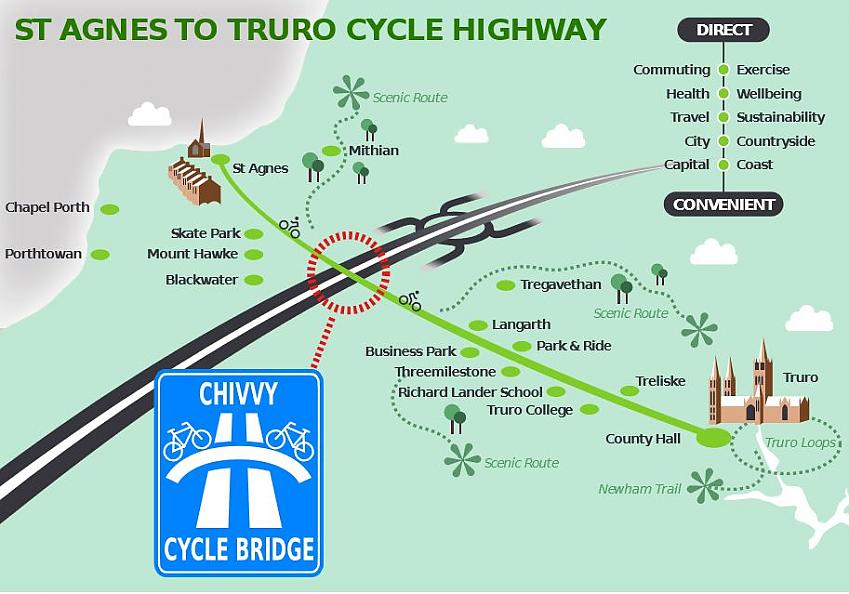 ‘Something needs to be done there’

The consultation report published the following September revealed that walking, cycling and horse riding provision was the main concern raised on the Chiverton section of the scheme, mentioned by 219 of 590 respondents (37%).

This level of response elicited an emphatic reaction from Highways England. In a Radio Cornwall interview the project manager, Josh Hodder said, “We did a lot of survey work to identify where the desired routes were for cyclists, pedestrians and equestrians. It didn't identify Chiverton Cross as a desirable route. Following the feedback from the consultation it's been raised that this is absolutely a desirable route for people to get from St Agnes down to Truro and something needs to be done there”.

The response was to include an underpass in the main scheme. However, in our view, the proposed underpass at 70 m long and only 4 m wide was inadequate and would be intimidating to use, especially in the evenings, and for less confident cyclists. It also represented a significant detour off the direct alignment of our route. We felt the underpass was a low-cost solution designed to get the road scheme through on time and budget. We saw it as a tacit acknowledgement of the inadequacy of the underpass that Highways England continued to work with Cornwall Council on the possibility of a bridge as part of a shared use route.

There was a further opportunity for the public to make comments to the Planning Inspectorate through 'written representations'. Once again, we put all the relevant information onto our website, especially the details and shortcomings of the proposed underpass, pointing to Highways England and Sustrans documents highlighting the personal safety issues.

Conscious of ‘issue fatigue’, we didn't organise any more publicity events, but had stalls at local venues and on roadsides, and of course emailed and used social media, in an attempt to get as many people as possible to submit comments.

Of a total of 117 representations made on the entire road scheme, 86 related to the inadequacy of the proposed underpass, an incredible 74%.

As a result, the Planning Inspectorate made the crossing one of the principle issues in the following examination, and requested a 'Statement of Common Ground' between the campaign group, and Highways England.

In February 2019, Highways England and Cornwall Council announced a £19m funding package for four shared use routes that would become known as The Saints Trails. The majority of the routes being funded mainly through Designated Funds, they included the 'St Agnes to Truro Highway' incorporating the proposed cycle bridge at Chiverton.

However, despite the funding announcement, the timing issues of the Designated Funds bridge were still unresolved, so we maintained that given its strategic importance it should be in the main dualling scheme.

Following further negotiations a way forward was found. Highways England and Cornwall Council agreed that the Council's match funding of £2m could be put aside for the bridge and not subject to the 2021 spend deadline. With written assurances of this we took a pragmatic view and withdrew our objection to the bridge not being in the main scheme.

The contribution of our campaign group was recognised by Cornwall Council’s Portfolio Holder for Transport, Geoff Brown who said:

“Truro Cycling Campaign played a leading role in encouraging the local community to respond to Highways England's planning application. Over 70% of responses related to the need for a cycle bridge - a number hitherto not seen by Highways England. It was this level of response that secured the funding for the bridge and showed a level of support for cycling which helped the Council attract the wider and very significant funding award for the Saints Trails.” 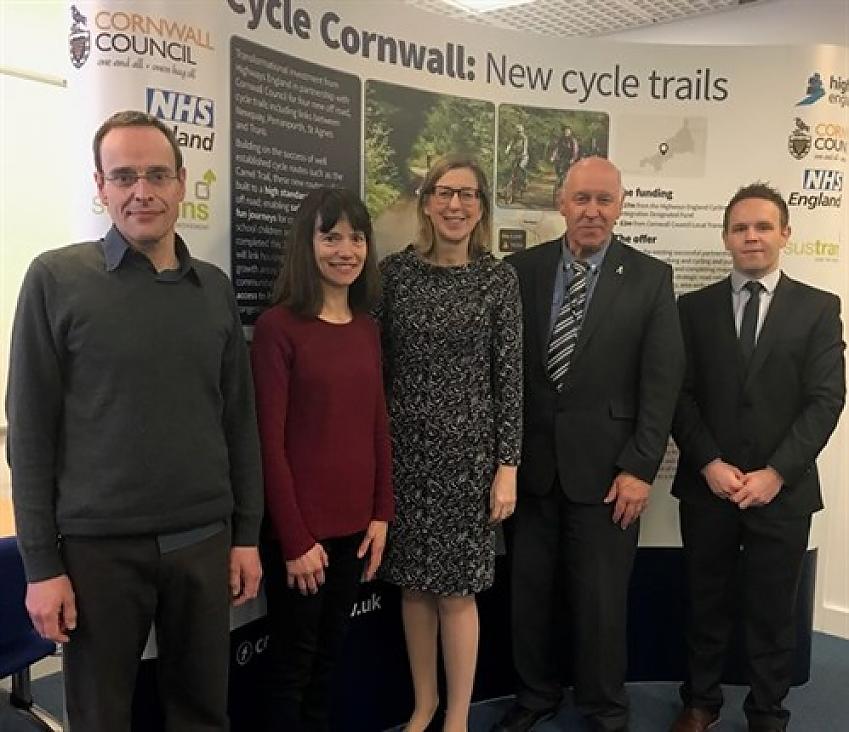 Advice for other campaigners

The level of community support for cycling shown in the consultation process aided Cornwall Council in attracting a record amount of national funding.  Although we had to be vociferous in our argument for a crossing, we were always constructive in our criticism and willing to compromise. We have built a good working relationship with the Council's team delivering the Saints Trails, who regularly consult with us on progress and the detailed design of the routes.

You must be passionate. Our campaign consists of a handful of people at its core who are prepared to do a lot of work.

The campaign has been instrumental in raising the profile of our campaign group, and made us an important consultee for other cycling related issues in the area. Our experience has shown the simple value of having a campaign structure in place before such events arise.

And of course, you must be passionate. Our campaign consists of a handful of people at its core who are prepared to do a lot of work. However, there are others who may have less time but who can be crucial contacts, or can help with important skills such as graphic design or photography. Everyone has something to offer, and every person’s support counts.

Want more tips and tricks for local campaigning? Have a look at our campaigning skills and tactics pages. 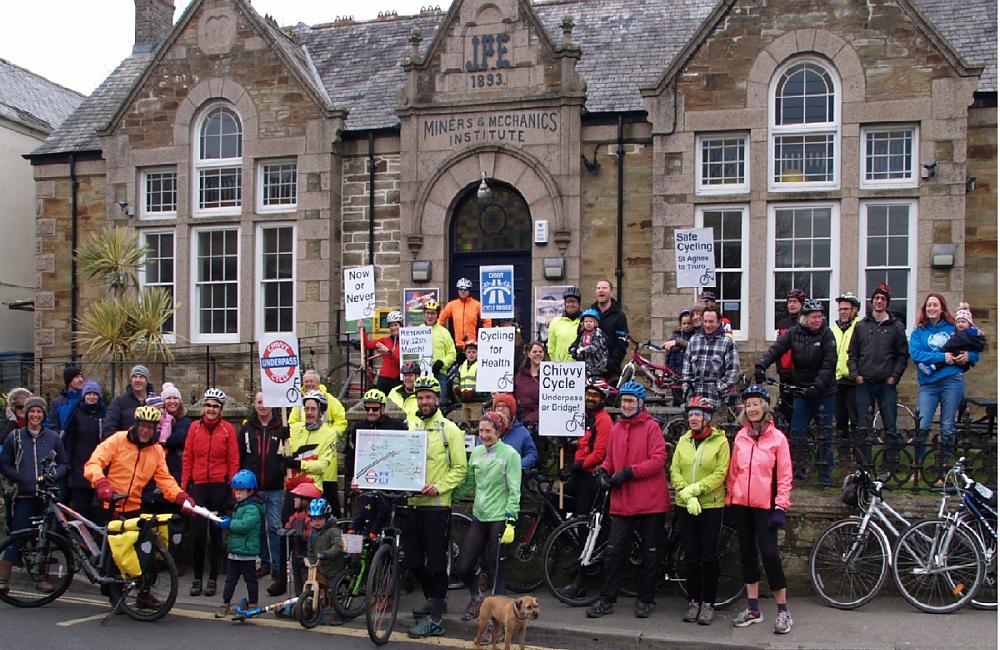 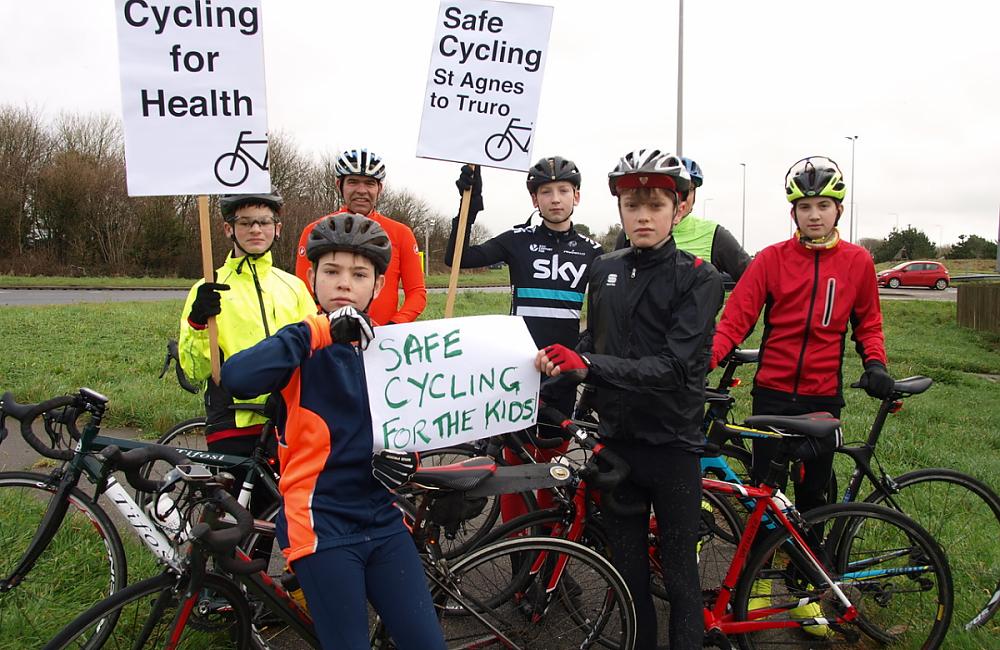