Which of the Department for Transport’s announcements made today will make the most difference to active travel? And which will last more than one summer? Cycling UK asks

To launch the Government’s 'Summer of Cycling and Walking' campaign, the Department for Transport (DfT) made a number of announcements overnight which it hopes will build on the Prime Minister’s £2 billion Gear Change cycling and walking programme, announced this time last year.

Many aspects of the package, including how much money is allocated to active travel, only relate to England, because they’re devolved matters for each government within the UK.

If changes to the HC sounds like an old news story, that’s because the DfT consulted on it last year, and over 16,500 people supported Cycling UK’s call for better protection for vulnerable road users.

While we responded to all the proposals and highlighted ten much needed changes, we focussed on four key things, namely:

The DfT announcement today confirms that the first three will all be included in the new HC, to be published in the autumn.

While not mentioned expressly within the release, Cycling UK understands that the fourth, the inclusion of the Dutch Reach, will also make its way into the new HC.

The hierarchy – and why it matters

If you’re asking yourself why the HC matters, whether changing it is enough on its own (it isn’t), or what any of these specific changes mean, you’ll hopefully find the answers in our frequently asked questions article.

Of all the things that we campaigned and lobbied for in the new HC, however, the most significant win in my view is the new introduction of a hierarchy of users or responsibility. 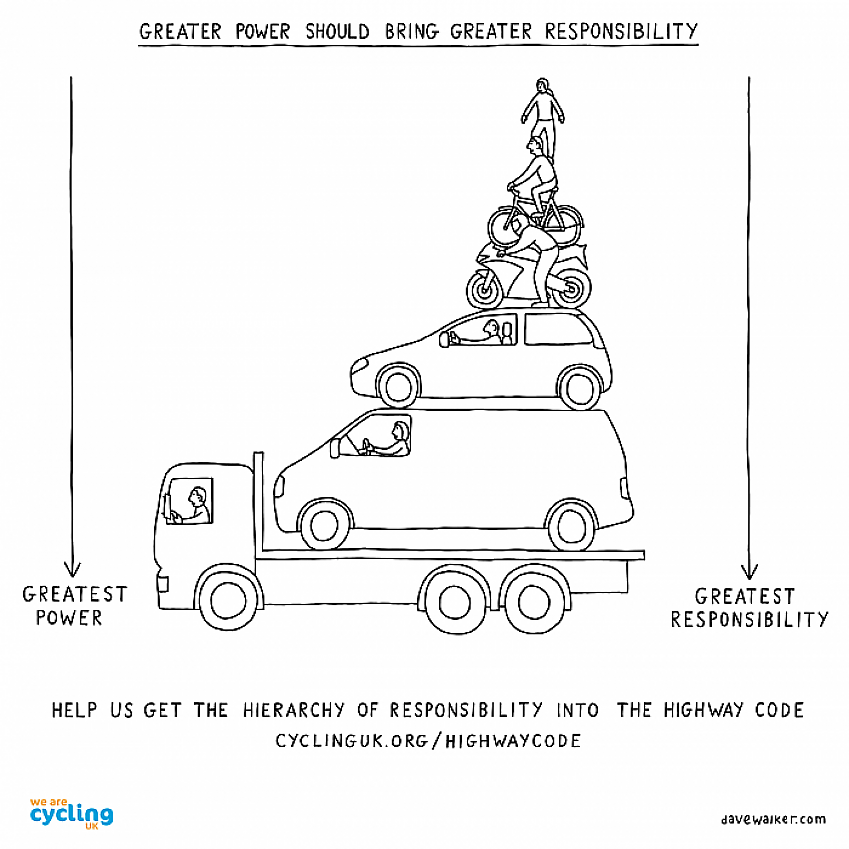 I presented at a Royal Society for the Prevention of Accidents (RoSPA) road safety conference in 2019, arguing that rather than focussing on reducing road danger, the current HC frames road safety in a vacuum, where the consequences of discouraging active travel and its public health benefits are ignored.

My suggestion was that the HC needed to promote a road safety culture whilst factoring in the benefits of active travel, independence, choice, and wider societal and environmental benefits.

That means one that doesn’t strive for balance between all road users, but focuses on reducing the greatest causes of danger and risk rather than on personal protection measures. The goal is to embed a ‘hierarchy of responsibility’, so that those who can cause the greatest harm (people in motor vehicles) have the greatest responsibility to reduce the danger they pose to others.

I thought this was controversial for the audience at the time, but was amazed by the reception I received, as I discuss in Cycle magazine.

Two years on, the DfT has agreed to introduce this cultural change. It’s not going to be popular with everyone but, in truth, the really surprising thing is that we’ve never had a rule like this until now.

The Highway Code should look to reinforce behaviour that reduces the danger we pose to others road users and protects those most at risk, so rules which place greater responsibility on people driving larger vehicles are long overdue

Hopefully, these changes will herald a change in attitudes, where the first question in any road safety conversation is how we reduce danger, not how people protect themselves from it.

We’ll comment in detail on all of the changes once the consultation response is published, and on the need for effective communication of those changes, but another announcement today that’s hugely welcome concerns something which sounds very dull – network management duty guidance!

This only relates to England and is referenced in the DfT release as ’new requirements to ensure that active travel schemes are properly assessed’.

We already knew from the answer to a question in parliament last week, however, that the Government were planning to issue updated statutory guidance to all highways authorities imminently, making it clear that they should always leave cycling and walking schemes in place for long enough for their impacts to be properly assessed.

Peter Walker’s Guardian article today puts much more flesh on the bones, referring to a letter being sent by transport minister Chris Heaton-Harris, to the leaders of every English local authority with highways responsibility, warning them that if schemes installed using central government money are then hastily abandoned, this could affect future grants.

Transport Minister Chris Heaton-Harris commented: "Premature removal of schemes carries implications for the management of the public money used in these schemes and for the government’s future funding relationship with the authorities responsible.

"The department will continue to assess authorities’ performance in delivering schemes and, following the precedent we have already set, those which have prematurely removed or weakened such schemes should expect to receive a reduced level of funding."

Changes to the network management duty guidance might not sound that exciting. Yet one of the grounds for Cycling UK’s legal challenge against West Sussex County Council (WSCC) - for prematurely removing the cycle lane on Upper Shoreham Road in Shoreham - is that the council failed to have regard to or comply with statutory guidance when it decided to remove the lane.

The Minister’s letter to local authority leaders and the revised guidance is, sadly, sorely needed, because it’s been a depressing week until now, to be honest.

After writing last week about the various legal challenges against councils in West Sussex, Poole and Kensington concerning the premature removal of active travel schemes without proper evaluation, this week has seen councils in Liverpool and Brighton announcing to remove cycle lanes.

There’s been no adequate evaluation prior to either of these decisions, and both councils should reconsider their decisions. If they don’t, not only might they end up on the list of councils facing judicial review proceedings but, as the Minister’s letter makes clear, their decisions are likely to affect future funding applications.

WSCC has already been told that it can’t apply for the next round of active travel funding, but they’re likely to be joined by others fairly soon if councils don’t get the message this time.

Changing people’s travel behaviour takes time, so when cycle lanes and infrastructure are installed they need to be given a chance to bed in, and be properly evaluated before decisions are taken to remove them. Otherwise, councils end up removing schemes because of noisy objections rather than after consideration of the evidence.

Peter Walker quotes the Prime Minister in his article, and it would be hard to express this better:

"Trying to squeeze more cars and delivery vans on the same roads and hoping for the best is not going to work." Boris Johnson said. "I support councils, of all parties, which are trying to promote cycling and bus use. And if you are going to oppose these schemes, you must tell us what your alternative is."

That’s the question councils in Liverpool, Brighton, Poole, and Kensington need to answer – what’s your alternative? If the answer is 'business as usual' and nothing’s changed, you’re asleep at the wheel, haven’t realised there’s a climate crisis, don’t have a plan, and you’re probably going to join West Sussex on the ineligible-for-funding list.

I’ve focussed on two real positives, but others include confirmation that the new Active Travel England Board will start work later this year, and plans to publish a new road safety strategy. We’ll provide updates on those and other announcements once we know more.

I haven’t focussed on money in this article, partly because the HC and network management duty changes are unequivocal positives for which the DfT deserve credit; and partly because there was never going to be a game-changing announcement on funding for active travel in advance of the spending review this autumn.

As my colleague Roger Geffen makes clear in this article, the announcement last year of £2 billion ring-fenced funding for active travel over five years was a significant milestone, and a substantial increase in historic levels of funding.

But it’s not enough for the Government to have any chance of reaching its own Cycling and Walking Investment Strategy targets to double levels of cycling from 0.8 billion ‘stages’ in 2013 to 1.6 billion stages in 2025, for which investment of around £6bn to £8bn over five years is needed.

That’s the level of investment that’s required to really deliver the Government's Gear Change vision, and that’s the argument we need to present in advance of the autumn spending review, when a multi-year funding settlement will hopefully be agreed.

But today’s announcement lays some of the foundations for delivering Gear Change, and it would be churlish not to acknowledge that increasing this year’s budget by 30% is another layer in those foundations, though there’s still a long way to go.