This week, the House of Lords debated a host of amendments to the legal framework of road traffic offences and penalties, proposed by Cycling UK and its allies.These include new legal definitions of and penalties for 'careless' and 'dangerous' driving, 'hit-and-run' offences and car-dooring. Cycling UK's policy director, Roger Geffen reports

Cycling UK has spent many years campaigning on road justice issues. Our recent Five Flaws: Failing Laws report highlighted some of our key concerns. These include:

In 2014, we secured a promise from Chris Grayling MP, who was then justice secretary, to carry out such a review. The Government later promised full public consultation on this review. That has never happened.

Instead, the Government conducted a much more limited review in 2016/7, which considered just three proposed changes to the law:

After many years of MPs demanding action on these, the Government eventually added them to its controversial Police, Crime, Sentencing and Courts (PCSC) Bill, which is currently before Parliament.

Cycling UK wish to support the first of these changes. However, we fear the package as a whole will do little to tackle the routine failings of the road justice legal system, and could in fact be counter-productive, for several reasons:

For these, and other reasons, Cycling UK has worked with British Cycling, Living Streets, the Road Danger Reduction and RoadPeace to draw up a wide-ranging package of amendments to the Bill. These are summarised in our briefing for the Bill's 2nd Reading in the Lords, and spelled out fully in our Committee Stage briefing.

Together, we believe these could vastly improve the quality and consistency of the legal system's responses to bad driving.

Points of agreement and helpful disagreement

These amendments were debated in the House of Lords on Monday (8 November 2021). We thank Lords Berkeley (Labour) and Russell (Crossbench), Baronesses Jones (Green) and Randerson (LibDem) for tabling them, and for the many supportive comments from other Peers. This blog cannot do justice to a six-hour debate (see transcripts of session 1 and session 2), with much of the discussion being highly perceptive and thoughtful. However, I will attempt a brief summary.

Lord Berkeley (a former vice-president of Cycling UK) opened the debate on a group of amendments relating to the definitions and penalties for 'careless', 'dangerous' and other driving offences. He pointed to the fact that the law currently defines 'careless' driving as that which falls 'below the standard of a competent and careful driver', while 'dangerous' driving falls 'far below that standard'. He said that the terms 'below', 'far below' and indeed 'a competent and careful driver' were all open to subjective interpretation.

He suspected that when drivers are accused of an offence which the jurors could imagine committing themselves, those jurors might well think "there but for the grace of God go I". They might then opt for a 'careless' driving conviction, to avoid the risk of sending the driver to prison - even though the driving had clearly caused 'danger that would have been obvious to a competent and careful driver' (this also being part of the definition of 'dangerous' driving).

However, he didn't feel the remedy was to increase the sentences for 'careless' driving, but instead to improve the definition of 'dangerous' driving, while also placing greater reliance on driving bans (rather than custodial sentences) for those who have driven 'dangerously' but who aren't obviously dangerous people - and who therefore don't obviously need to be locked up in the interests of public protection.

Baroness Jones of Moulsecoomb (a patron of the Road Danger Reduction Forum) also called for root-and-branch reform, saying the legal framework was outdated, having been 'patched together' over the past few decades.

Baroness Hayter of Kentish Town spoke movingly about her long-standing interest in these issues, given that her mother had been killed by a drink-driver the day before her tenth birthday. She backed our call for the offence of 'causing death by careless driving while under the influence' to be matched by an equivalent 'causing serious injury' offence, noting that if her mother had survived (albeit perhaps with life-changing injuries), the legal framework would have been wholly inadequate to deal with the case.

Lord Russell of Liverpool voiced his concern that road traffic offences and penalties 'are dealt with in an almost entirely inconsistent manner'. He added that "this inconsistency, or lack of clarity, in the law...benefits a huge and very profitable industry in this country consisting of law firms that specialise in enabling people to escape, in a variety of ingenious ways, what are almost certainly the right penalties".

However, two of the most interesting contributions came from Peers who disagreed with our proposals, though not fundamentally:

Conservative Peer Lord Attlee feared that our proposal would increase the prison population (I very much hope he is wrong on this, as our call for greater reliance on driving bans is intended to do the precise opposite). He also felt that there could be problems with our proposal to provide objectiveness on the definitions of 'careless' and 'dangerous' driving by relating these to the driving test.

However he agreed that "There is a problem with securing convictions for dangerous driving; convictions and prosecutions are often for the lesser offence of careless driving" - a point he reiterated several times during the course of the debate - and suggested an alternative solution, which is certainly also worth considering.

Lord Hope of Craighead objected to the Government's proposals for a new offence of causing serious injury by 'careless' driving with a two year maximum sentence. He felt that it was wrong to imprison people for driving that was deemed to be merely 'careless', a concern that several other Lords (including Lords Berkeley and Lord Judge) echoed during the course of the evening. However, as an alternative to deleting this clause, he also proposed an amendment which (as the minister Lord Wolfson rightly noted) would have moved the definition of 'careless' driving even closer to that of 'dangerous' driving.

Cycling UK believes that a better approach is to make sure that any offence which merits a prison sentence can be encompassed by the definition of 'dangerous' driving. I am keen to pursue a further dialogue with both Peers, with the aim of finding an agreed solution to put forward when this part of the Bill next comes up for debate.

Ministerial rejections, but we won't give up!

The disappointing parts of the debate were the many points during the evening when various Government ministers stood up to raise objections to our proposals. However, I was particularly aggrieved by their rejection of our amendment requiring the Government to carry out a review of road traffic offences and penalties within two years of the Bill being passed.

Minister Lord Sharpe claimed that they had already carried out such a review, adding that it was an 'internal review'. This was despite clear ministerial promises in 2015 to go out to full public consultation. The limited review they conducted in 2016-7 covered only the three proposals that are now in the PCSC Bill. We still await the public consultation on a 'Full review of all driving offences and penalties', as promised in 2014.

The following morning, Ben Bradshaw MP (who has been a stalwart on this issue for many years) asked a question on the same issue in the Commons. He too received a non-response to his question. 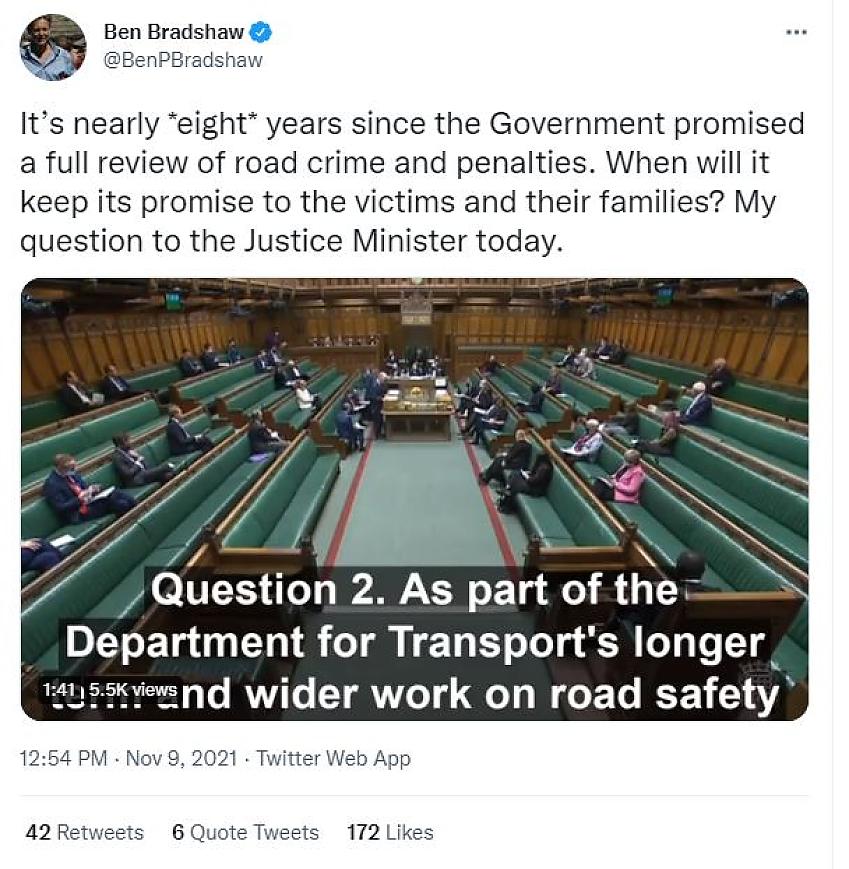 A chink of light

The one positive in the ministerial responses to our amendments was an openness to consider strengthening the maximum penalty for 'hit-and-run' offences where the driver or rider knew (or reasonably ought to have known) that they had been in a collision that resulted (or could have resulted) in serious or fatal injuries.

All too often, it seems that drivers involved in hit-and-run offences are trying to avoid being caught because they were driving while uninsured, unlicensed, disqualified, drunk or on drugs. However the upshot is that they leave their victims to die in the road when, in some cases, their lives might have been saved if the driver had called the emergency services straight away.

There are plenty of media reports of truly harrowing stories; Sean Morley, Ben Regan, Ryan Saltern, Alfie O’Keefe Hedges, Oscar Seaman, Scott Walker, Shakeel Sheikh, Mathew Smyth, and Mathew’s close friend Paul Wood (who were both killed while riding their motorbikes, within 9 months of one another).

Yet the maximum penalty for leaving the scene is just six months. This may be suitable for those who drive off after scratching someone else's parked car, but not for those who leave a fellow human to die in the road.

Home Office Minister Baroness Williams of Trafford told Peers that "the Department for Transport is exploring options that could be pursued in this area, including but not limited to the available penalties and how the offence operates as part of long-term and wider work on road safety."

That is somewhat encouraging. However, it doesn't seem that they are in any great hurry to prevent further injustices to families in the shorter term.

Another parliamentary debate next Monday

Fortunately, we soon have another opportunity to keep up the pressure on the Government to take action!

The families of Ryan Saltern, Mathew Smyth and Paul Wood had launched parliamentary petitions which had each reached over 100,000 signatures, with the result that they will be debated this coming Monday (15 November 2021). A third petition, launched by Shakeel Sheikh's family, is still live and has attracted over 24,000 signatures. Although these parliamentary petitions all relate to 'hit-and-run' deaths, the title of the debate covers all road deaths.

We will therefore be urging MPs not only to make an immediate amendment to the PCSC Bill to substantially increase the penalties for 'hit and run' offences involving (potentially) serious or fatal injury, but also to commit to the wider review of road traffic offences and penalties.

Please email your MP, urge them to speak in the debate, and send them the MPs' briefing below. The more MPs from all sides of the House who are calling for action, the sooner it will happen.

Urge your MP to speak in the road traffic offences for fatal collisions debate this coming Monday, 15 November 2021

How to: engage with local police View