Lauren started off-road riding in May 2020 at the height of the lockdown in the UK
By Anonymous
Friday, 31 July 2020

When lockdown began, it wasn’t the empty roads that got Lauren Purdy cycling, but the towpaths, singletrack and downhill dirt. She started riding off-road again for the first time since she was a child

I haven’t cycled off road since I was in primary school. Growing up near the Peak District meant two weeks of every summer holiday were spent caravanning and camping with my beloved grandparents in exotic locations like Tissington, Cromford and Ashbourne.

I learned to ride a bike on grass and spent summers on my bike at ‘Mrs Elliot’s farm’ or cycling along the Erewash canal and the gravel bridleway of the Tissington trail.

All I had ever known cycling to be when I was growing up was off road. To me, cycling was something you did off road, as a standard part of growing up and you didn’t have to deal with cars.

But, once I left primary school I didn’t get back on a bike for about 15 years.

That was until I met my bike-mad partner, Peter.

As I’d grown up, all thoughts of cycling for pleasure had been over-ridden by practicality – a way to get from A to B (more commonly known as the commute) – especially as I spent the next six years following university living and working in Central London, so it came as a surprise to me when I had the urge to try off-road riding again.

Peter grew up in Surrey, and knows the Surrey Hills like the back of his hand. He often returns home after a day on the bike, dusty or muddy (depending on the time of year) without an ounce of sweat on him – having had a thoroughly good time with his friends.

To me, though, mountain biking just did not appeal: “It’s manly, it’s dirty, it’s dangerous, and it’s not for me”…or so I thought.

“It’s so dangerous!” I would say to him, having been presented with a bruise or two on his hips or thighs where he’d had a fight with a tree on a downhill stretch. The thought of having an accident (I’ve only ever broken a toe and it was painful enough spending a whole Glastonbury Festival with it shoved in a welly boot) and ending up in A&E was something I feared, particularly when the coronavirus crisis began. I didn’t want to be another burden on the NHS.

Living a stone’s throw away from the Basingstoke Canal, during the early period of lockdown, the towpath became a source of our hour of allotted exercise. We started running, but when I was stricken by crippling shin splints, I knew I needed to try something low impact, so we went cycling instead.

The only trouble was, I knew from personal experience that my road bike didn’t handle canal towpaths well at all. I once fell into a hedge of stinging nettles on the way to Birmingham along the Grand Union and didn’t fancy that happening again – how I managed to fall into the hedge and not the canal still amazes me.

“Mum’s got a mountain bike, I’m sure she’d let you borrow it,” Peter suggested one afternoon. I groaned in reply, the image of a heavy old bike in my mind. I was, however, pleasantly surprised when presented with her women’s specific Giant mountain bike – a model from 2006 (and not a spot of rust or a single scratch on it), complete with front suspension which felt like a dream after the steel frames I’d ridden as a child.

After that first ride along the towpath I was hooked, but I wanted more adventure. “When can we do some downhill bits like you do?” I asked Peter. “Why not this weekend? It’s not like we can do anything else!” After considering all the routes he knows so well, he suggested we try a local trail just off the canal. 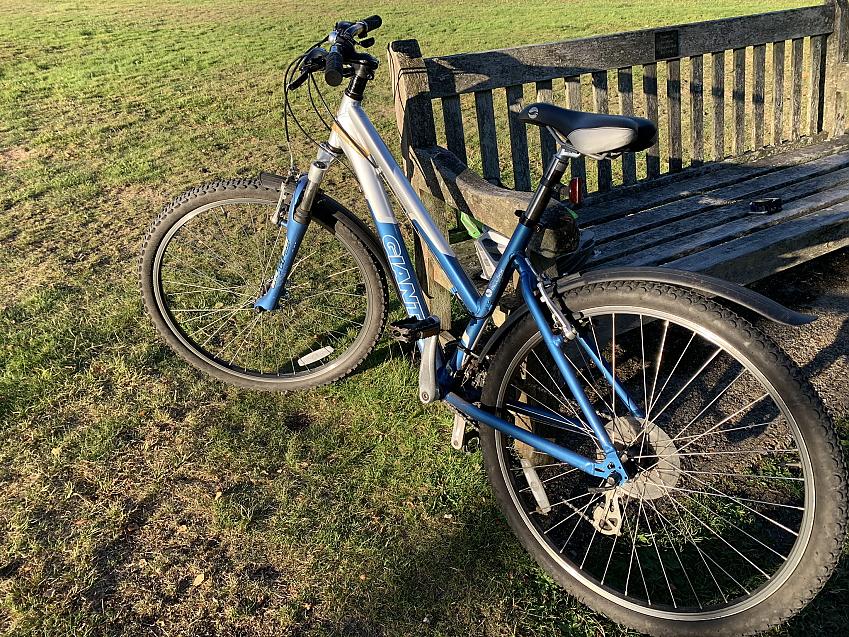 At first, the tree roots terrified me. Who am I kidding – everything terrified me! The steep hills that made me feel so slow and heavy and useless: the steeper descents, the loose soil, the nettles, the gravel, the brambles, the fear of coming off, the fear of looking stupid – just the fear.

One thing I discovered quickly is that I am a loud off roader. I make a lot of ‘Argh!’ ‘Woah!’ And ‘Wheeeee!’ sounds on our outings. At first this was embarrassing – I think us gals are used to making ourselves quiet – but now I’ve embraced it.

If I’m feeling frustrated because I didn’t make it all the way up a hill, happy I’m rocketing downhill, or scared I’m going to hit a tree root at the wrong angle and come off - why not express it? Only Peter and the trees (and confused distant passers-by) can hear me.

At first, we would do the same route over a few outings before moving onto a new one. I found this was a good way to build up my confidence – the more I knew a route, the more I could relax. The hills became easier to climb as my fitness improved, and the downhill stretches became less intimidating.

I still freak out when my back wheel ‘goes’, but I know it’s only momentary. Where tree roots used to terrify me, I now view them as a challenge – ‘how should I tackle it this time?’ – and downhill stretches fill me with excitement now that I don't cling onto the brakes for dear life.

It took me three ‘goes’ of each route we took to feel comfortable and confident, I was impressed by how quickly I became accustomed to life off the tarmac. Each time, Peter would ask if I wanted to try this path or that, extending the ride a bit more once he saw I was feeling brave and enjoying it more and more. The miles soon clocked up, but it never feels like exercise, unlike being on my road bike.

Each new track brought a new challenge – mountain biking is a mental workout as well as a physical one. I find myself planning moves in my head on the fly as I cruise downhill, like a rally co-driver calling out from their pacenotes – it’s a constant test of your reactions.

Off-road riding can offer you so much freedom. I used to think that road biking opened up a whole new avenue of exploration – you see things you wouldn’t notice in a car. But off-roading means you can suddenly change your mind and take that path, or this turn – knowing that the knobbly tyres beneath you can handle the terrain. The added bonus being you don’t have to be clad head to toe in Lycra.

Mountain biking for me harks back to the fun of being a child. As you get older it’s harder to take risks because you have more inhibitions, but trust me, the downhills are worth it.

When you're off-road, you don’t have the fear of being knocked off your bike, you’re in the fresh air, if you fall you’re more likely to land on a soft surface or have your fall broken by bracken. It no longer concerns me whether it’s ‘manly’ – it’s just good fun. 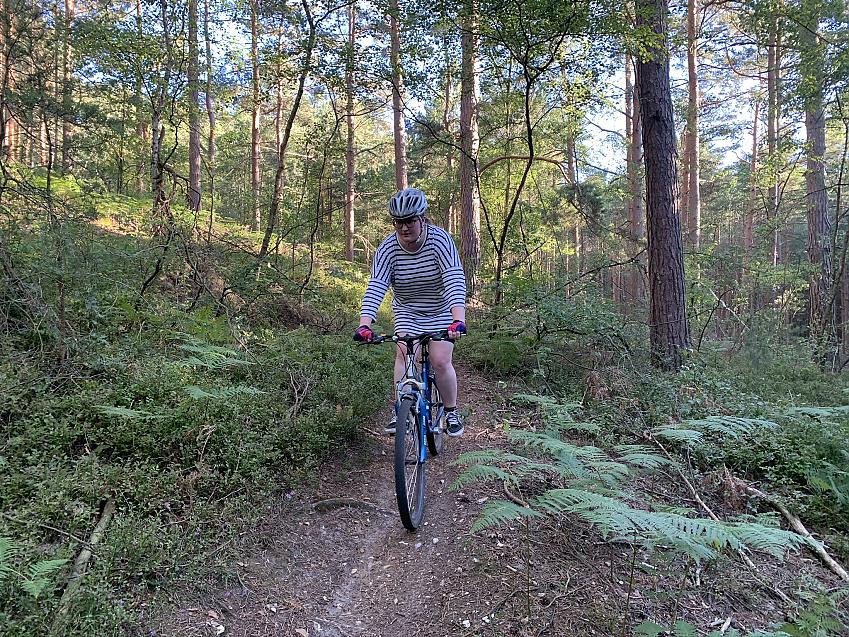 When I’m out on the MTB, I go for kit that is practical, comfortable and appropriate. This includes:

In addition to this, I carry a bottle of water always (two if I know I’ll be out for more than two hours), my phone to capture photographs and my ride on Strava, my GoPro, and (at the moment) my mask for that well-deserved pub stop on the way home. 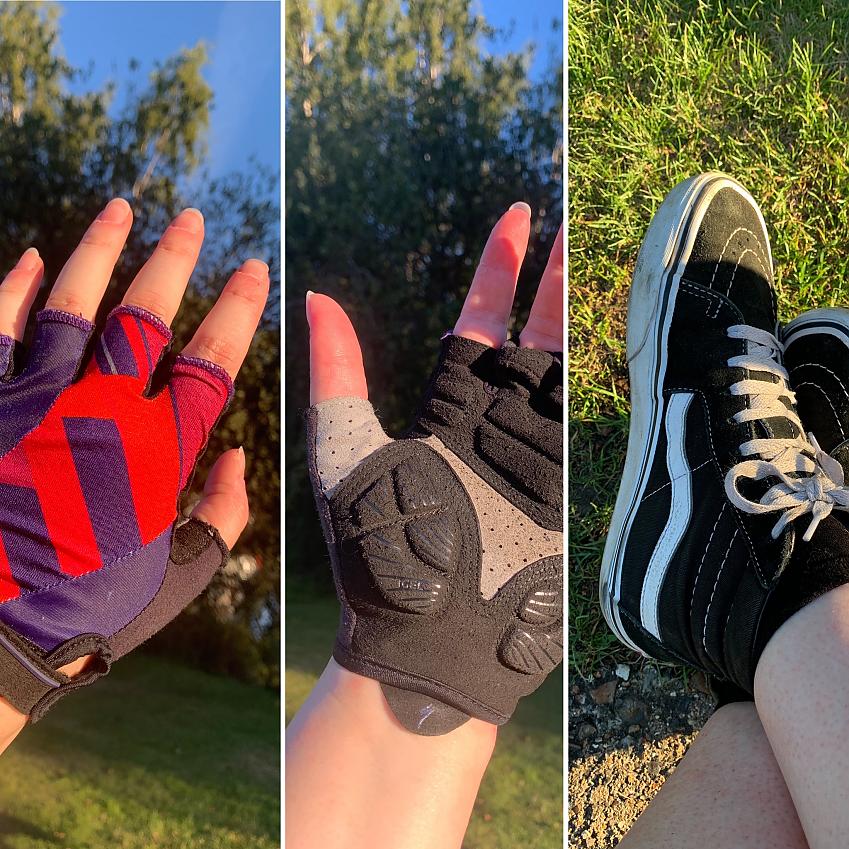 My Specialized fingerless gloves were a sale bargain! And my Vans are perfect for MTB

Mountain bike terrain is dynamic and can be challenging. You must allow the bike to move independently and freely under you, this will aid control and ensure you can tackle all obstacles. To learn this technique you will need to find a mound or hump. This will allow the you to keep your weight centred despite the angle of the bike, gradient or undulations of the terrain.

The ready or ‘attack’ position is a neutral riding posture; it allows you to have good stability and control of the bike. The ready position is often used as a starting point for performing and finishing an individual technique. The position should be implemented when entering technical sections of trail.

Safe cornering on all surfaces and gradients is an essential technique for mountain biking. Cornering effectively will help you enjoy the terrain more and helps ensure group rides remain safe and evenly spaced out.

To learn more about mountain biking why not consider one of our courses.

What mountain bike should I buy? View

What mountain bike should I buy? View

Tips for cycling in the wind, wet and leaves View