Autumn bikepacking: why you should do it

Autumn bikepacking: why you should do it

Just because summer has ended, it doesn't mean you have to pack away your camping gear until next year. Cycling UK's Sam Jones revels in the delights of autumnal nocturnal adventures - especially by bike - and recommends everyone gives it a go at least once.

Summer dried branches crackle beneath my wheels, the cool night air swoons with the heady scent of cep and a lone tawny owl screech breaks the silence.

Our bike lights strafe the woodland gloom as we search for a flat spot to make our beds for the night. The leaf strewn floor is a potential minefield of jolts and judders, and requires careful navigation with one eye on the ground ahead and the other looking for that right bivi spot.

Distant rustling of nocturnal predators beyond our lights’ haloes show we’re not alone in the darkness, but for the heart of Surrey, barely five miles from Guildford, it feels as though we are. 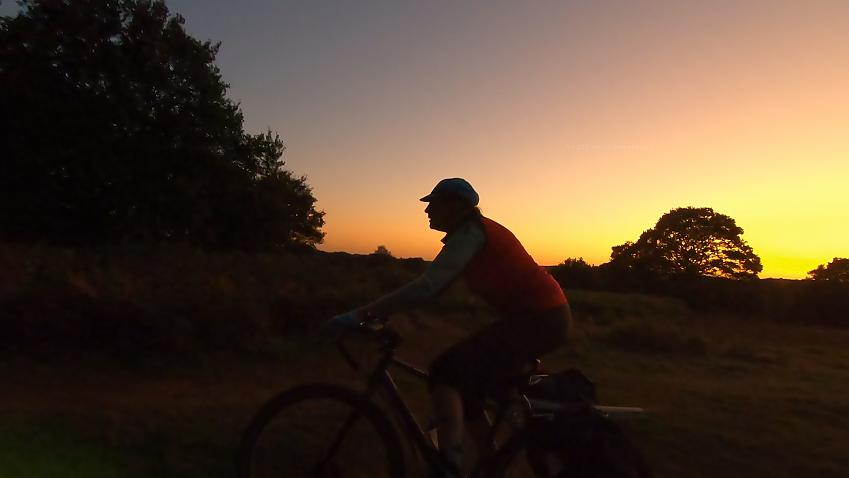 A small enough clearing for two edges closer. It’s far from the bridleway, but with an opening in the canopy for the stars and the prospect of sunrise above. We clear the dead branches away, lay out our bivvys and literally hit the sack.

It’s Wednesday evening, and together with my colleagues, volunteer coordinator, Julie Rand (who joined us for the evening ride) and video producer, Robby Spanring we’ve headed out for a midweek bikepacking micro-adventure .

It’s Robby's first bikepacking trip out, and the conditions couldn’t be much better.

Just because it’s autumn, it doesn’t mean your adventuring has to end...[this is] my favourite time of year for just heading out and spending time (and a night) outdoors.

There’d been a light sprinkling of rain a couple of days before, so the trails are dry and tacky rather than dusty. The barbarous brambles of the Surrey hills are beginning to die back, the sunsets are just magical, and the temperature is like little bear’s porridge, neither too hot nor too cold.

During the hot summer months, mid-week overnight excursions understandably appealed to my pals and colleagues who found themselves gasping for breath in their overheated homes. 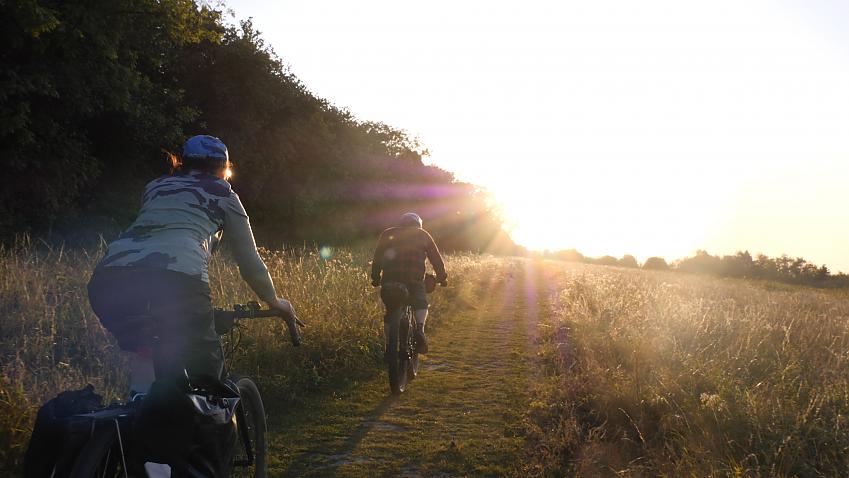 Heading west in to the sunset. Photo Robby Spanring

Come September and the beginning of autumn the enthusiasm noticeably waned. However, just because it’s autumn, it doesn’t mean your adventuring has to end. For me early autumn has to be my favourite time of year for just heading out and spending time (and a night) outdoors.

The smells of a woodland beginning its bedding down for winter hibernation are intoxicating. There’s an autumn harvest of blackberries, mushrooms (if you know what you’re doing) and varying nuts to gather, and with the right weather conditions (ie dry – there’s no fun in mid-week wet overnights only misery!) you can travel light and far, and make the most of the spectacular sunsets and sunrises.

It’s hard not to revel on the smooth flowing trails and tracks you know will soon become mud baths and a struggle to roll through. It’s a time to celebrate your cycling, and store the good memories to sustain you through the cold and wet winter months ahead!

Early autumn is a time to celebrate your cycling, and store the good memories to sustain you through the cold and wet winter months ahead!

As I’ve been riding the trails this summer, I’ve found myself constantly on the lookout for suitable spots for a night out. While of course it’s possible to find a suitable place in the dark, at the end of a long day behind the desk followed by miles on the trails, having a destination in mind makes things so much easier – and quicker for setting up in the evening.

As well as prepping where I’ll be spending the night on my micro adventures, I’ve also gradually been honing down the kit that I find works well for a comfortable night out (see sidebar).

It’s oft repeated maxim by smug folk with great waterproofs, that there is no such thing as bad weather, merely inappropriate clothing. The same could be said for sleeping out too – a decent sleeping mat and the right temperature sleeping bag for you are pretty essential to a good night’s sleep out. Get that right, and pretty much everything else is window dressing. 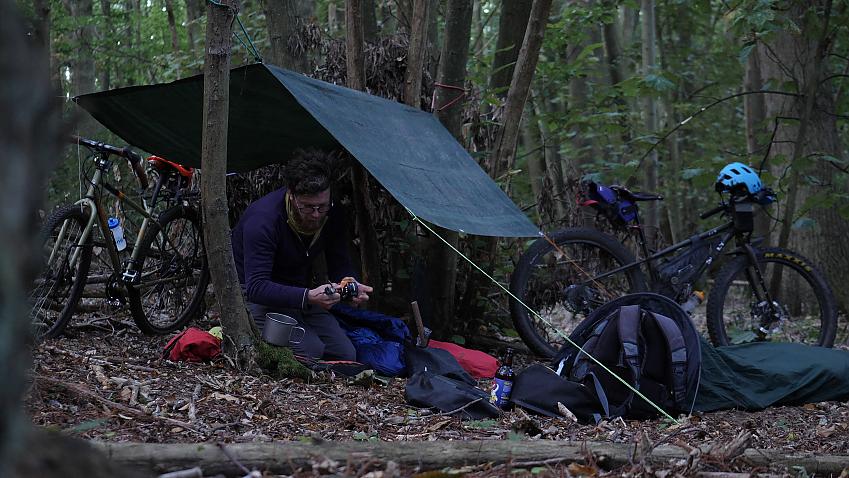 The more times I head out on a cycling trip whether for a night, a week or longer, the more I begin to realise that at the heart of each trip are the same items.

For longer trips, sure I may take a larger fuel canister, an extra shirt and underwear, but really there’s little difference between what I need for one night and what I need for several. Seasonally there's some variation on kit, with my warmer sleeping bag accompanying me in winter, and in the truly hot months just a sleeping bag liner - but generally it's always the same with the benefit being it's now very quick to pack when the mood for a micro adventure descends!

Understandably, for many people the big issue with a night out mid-week, whether you're bivvying or in a tent, is the lack of quality sleep. Unless you're blessed with the ability to lay your head down anywhere and nod off, you might find you struggle to get a decent night's kip the first couple of times.

A good hard blast on the bike before bed can help with making you sufficiently tired to sleep soundly, as can a good hearty meal (also good for helping keeping your energy levels up for cold nights) - but it's not uncommon for a lot of people to find the first night out difficult and the second and ensuing nights easier to sleep.

That's not always great news though if you're planning a one nighter...so if you are planning on doing this midweek and are at work best to make sure you've no important meetings or looming deadlines the next day! The sights you will see and fun you'll have will more than make up for any tiredness - and you'll always have your bed to return to the following night.

For me, I like the way a bivi bag gives you greater access to the outdoors and the night, which in some ways a tent locks out. While I'm guilty of giving (manly) shrieks at discovering I'm sharing my bedding with an earwig, in the dark you can't really see any of the beasties, and you can lie back and enjoy the night's soundtrack. Of course, a tent can keep creepy crawlies away, as can an enclosed hooped bivis like Terra Nova Jupiter Lite, so there are always options if you prefer not to share your bed.

Despite a disappointing night's worth of sleep for Robby, coupled with an early start to capture the dawn on film (worth it though - check out his film above!), after his morning cup of tea he soon returned to his usual cheerful self. Filming done, we broke camp swiftly, making sure to leave no trace, and headed back to the office the fun way, stopping by a greasy spoon for some breakfast along the way. 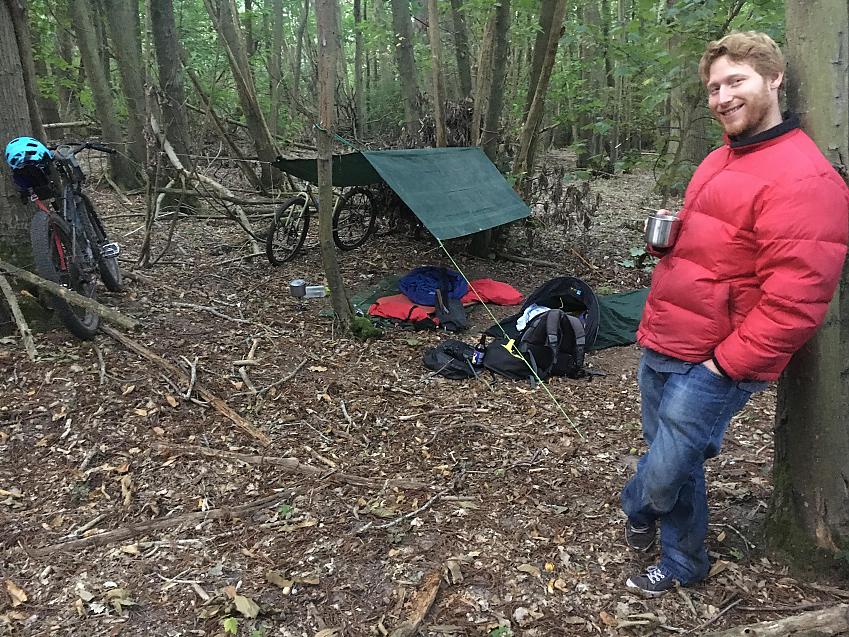 A morning cup of tea brings a smile back to Robby's face. Photo Sam Jones

Asking Robby how he felt after his first overnight bikepacking experience later that same day, he admitted that while it felt like work (which it was to be fair given all his filming and direction), it wasn't "too bad".

So perhaps there is hope for a next time - but if so I think we'll leave the cameras behind! 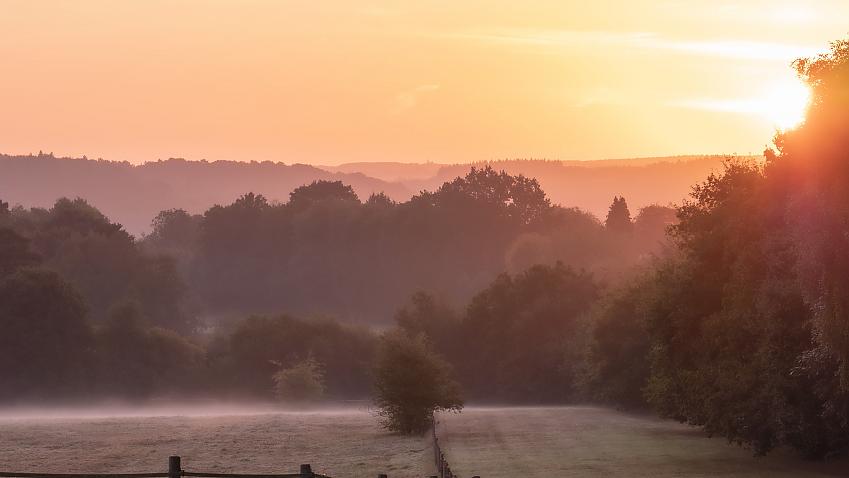 Sam set himself a new year's resolution to spend a night outdoors each month of the year and so far has kept to the challenge through snow, wind and rain in Surrey, Dorset, Lancashire, Cape Wrath, the Isle of Wight and Tuscany. He's not sure where he will end up next... 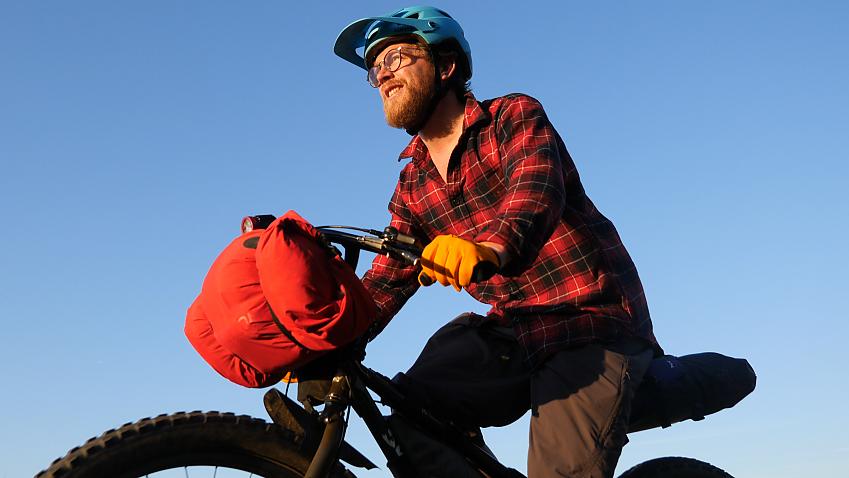 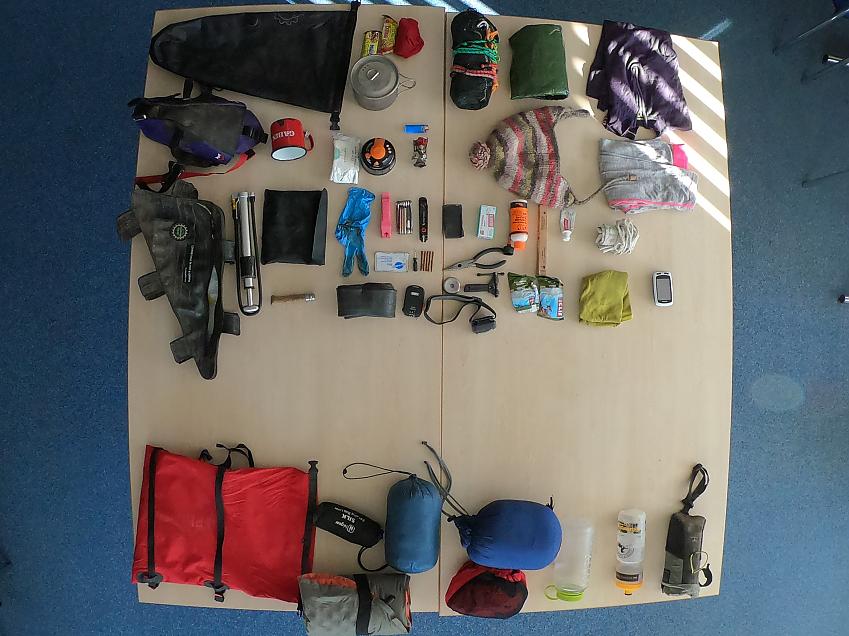 How to have an awesome autumn with Cycling UK View

How to keep cycling through the darker months View

Photos from the field: 12 nights out bikepacking in 2020 View
Cycling UK continues to support the UK to cycle
This remains true during this difficult period with the ongoing threat of coronavirus Covid-19
Read our latest advice on cycling
Join Cycling UK to help us change lives and communities through cycling
Membership gives you peace of mind insurance, discounts in cycle shops, rides & routes
Join now