Prior to buying these Five Tens, I’d tried Scarpa Approach shoes, boat shoes, and varying trainers on my flats. They’d all sort of worked, but soon suffered the fate of early retirement after not agreeing with my pedals’ pins. After getting a refund for my Scarpas, which had fallen apart after three weeks in Iceland, I took the plunge with the Five Ten FreeRider Elements.

I’m a long-time user and fan of Five Ten’s climbing shoes, which is where this US-based company’s origins began in 1985. Among climbers, they’re well-known and respected for their Stealth rubber. I wasn’t aware they’d moved into mountain biking (apparently way back in 2000!), but on the basis of their climbing shoes, I felt confident the bike shoes would at least be ‘sticky’.

My riding changed instantly. Feet no longer popped off the pedals when the going got bumpy, and short steep climbs that had previously eluded a successful ascent were mastered due to the firmer footing. In fact, they’re so sticky that I’ve found I can’t simply just move my foot on the pedal to find the right position, but actually have to lift it up and replace it!

They’ve a stiff sole, so they’re good for climbing, but it’s not too stiff to affect their comfort levels when you’re on your own two pins either.

In the late summer months, when it was dry and hot, I didn’t suffer particularly from overheating, but it’s been in the autumn and winter months where they’ve come into their own. The original Five Ten FreeRider, while equally sticky, is said to be a bit of a sponge in the wet. With the Elements, the leather upper is treated with a durable water repellent coating, and there are synthetic panels. The design keeps out the damp and enables them to dry faster.

It would be misleading to say these will keep your feet 100% dry, as there’s no webbing to the tongue, so going through deep water or prolonged rain will still lead to damp feet, but in the general rain you’ll not suffer. If you’re expecting rain, team them up with waterproof socks and you’ll be laughing.

I’ve used these for all my recent off-road riding, from short nighttime blasts around the Surrey Hills to multi-day bikepacking trips on the South Downs Way. If I cleaned off the mud, they’d look as good as new. I can’t recommend them enough. 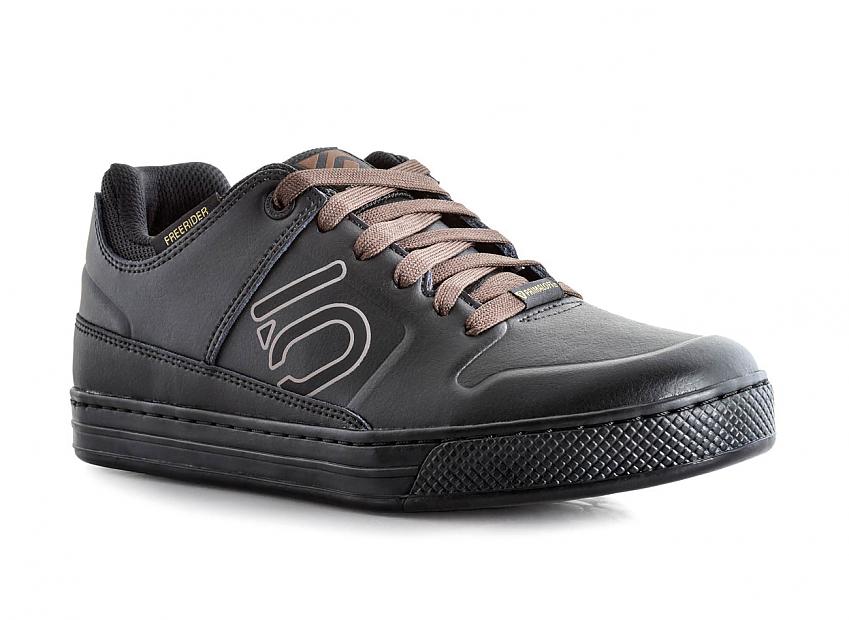 Designed for winter excursions, they’re insulated with PrimaLoft and meant to be more waterproof than the Elements. A bit dear for one-season wear, but could be worth it for sufferers of cold feet.
www.fiveten.com/uk

These shoes are designed to stick to skateboards and will do so for flat pedals as well, but for the savings in price you’ll sacrifice the potential of dry feet.
www.skatehut.co.uk